The injustice that may cost David Cameron’s translator his life: Ex-general hits out over ‘awesome guy’ who was denied sanctuary from Taliban

A former Afghan interpreter who worked with David Cameron may have suffered a ‘significant miscarriage of justice’ that is preventing him from being rescued from the Taliban, a retired senior British officer has warned.

The interpreter, known as Shaffy, 32, worked for six years with the British – three of them on the frontline and three with senior officers and visiting politicians such as Mr Cameron.

But he has been repeatedly denied sanctuary in the UK because of how he was dismissed from his job, which he calls ‘an injustice that could cost me my life’.

Now retired Major General Charlie Herbert, a former commander of British Forces in Helmand and a Nato adviser, who worked with Shaffy, has taken up his case and is looking into the allegations against someone he describes as ‘an awesome guy’. 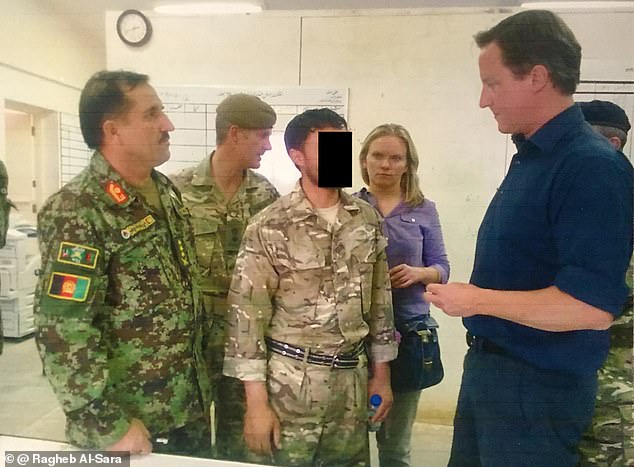 A former Afghan interpreter who worked with David Cameron may have suffered a ‘significant miscarriage of justice’ that is preventing him from being rescued from the Taliban, a retired senior British officer has warned

Mr Herbert said: ‘Of all the interpreters I know of still left in Afghanistan, this case stands out as perhaps the most significant miscarriage of justice. I believe he was badly wronged when dismissed without right to appeal in 2013, and to abandon him now to the hands of the Taliban is to multiply that injustice a thousandfold.

‘Given the questionable circumstances of his dismissal after six years of exemplary service, his application should be reconsidered and he should be allowed to put forward representation.

‘Those involved in his dismissal should also be consulted. I suspect they may themselves argue that rejection from relocation is disproportionate to anything he was accused of.’

It is extremely rare for an ex-commander of Mr Herbert’s standing to become directly involved in investigating the background to a case which Ministry of Defence officials insist involves serious offences. 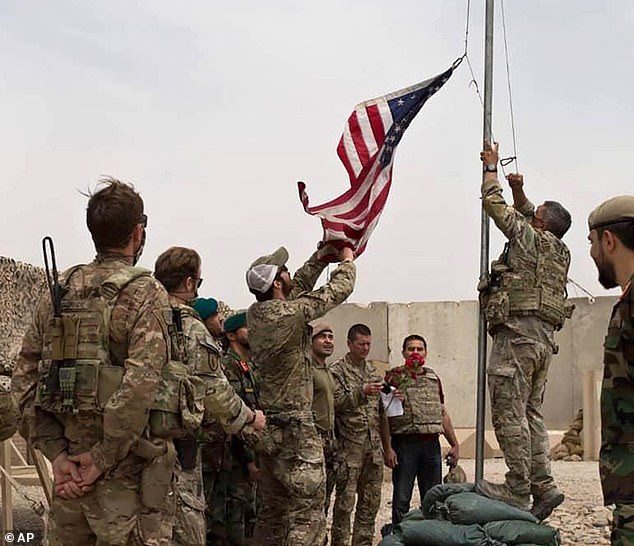 Yesterday Afghanistan’s president blamed America’s swift withdrawal of troops for sweeping gains by the Taliban. Pictured: File image of a US flag being lowered as American and Afghan soldiers attend the handover ceremony at Camp Anthonic on May 2, 2021

Defence sources have twice said Shaffy’s employment was terminated for sexually threatening a woman officer. He categorically denies the allegations.

Mr Herbert was one of 40 senior officers who last week signed a hard-hitting letter to Boris Johnson calling for a faster, more generous policy towards Afghan interpreters, who they argued should be allowed to relocate here unless they posed a threat to national security.

More than 1,000 – 35 per cent of the total who worked for the UK – had their employment terminated by Britain without the right of appeal or challenge, ruling the majority out of the right to relocate. Many dispute their cases, fearing they will be abandoned to the Taliban now international forces have left.

Shaffy was once considered one of the UK military’s most senior translators, which made him a Taliban target.

He was branded an ‘infidel spy’ and told he would ‘die like a dog’ days after he was shown on British and Afghan TV standing beside the then-prime minister Mr Cameron during a visit to Helmand in 2011.

Shaffy, a father-of-five, who worked for the military until January 2013, was twice blown up in armoured vehicles. His was one of the first cases highlighted by the this newspaper’s Betrayal of the Brave campaign.

A young soldier whose Army career was ended after his leg was mangled by a tank gun is suing the Ministry of Defence for £4million compensation.

Lance Corporal Michael Milner says he was hurt when his limb got caught in the mechanics of a Warrior’s weapon during training in Canada in 2017.

It is claimed there were too many soldiers in the vehicle, meaning its protective gun cage had to be removed and Mr Milner was caught up when the gunner moved it. This left the Yorkshire Regiment soldier’s leg ‘grossly swollen and deformed’ and, despite years of treatment and rehabilitation, he was discharged from the Army last month.

Mr Milner, 30, of Halifax, West Yorkshire, said his injuries have left him struggling to play with his children as well as ruining his career.

He claimed too many soldiers had been crammed in due to another Warrior breaking down. The MoD denies liability for his injuries. The case will be held before a High Court judge next year.

Mr Herbert has spoken to key figures in the case. They are said to deny he was involved in any sexual threats and now regret the termination.

Mr Herbert said: ‘It appears that he and other interpreters may have clashed with a recently arrived female interpreter manager on what was her first operational tour.

‘He was subsequently dismissed without any apparent due process or right to appeal.

‘Shaffy worked in Helmand for the best part of six years for a dozen different British Army units and during that time received numerous commendations. When I met him in 2010 he was the interpreter for the battlegroup Chief of Staff. He was an outstanding interpreter – held in the highest regard by all who worked with him.’

Shaffy said: ‘I have six weeks to save my family, six weeks before the official pull out of Western forces that will give the Taliban the freedom to hunt us down as they have told us they will. Speaking from Kabul, he added: ‘I am in danger, my wife and children are in danger as a direct consequence of working loyally for [the British]. I am entirely innocent of any allegations against me of any sexual threat.’