Singapore: As he does around the same time each week, Malaysian leader Muhyiddin Yassin turned up at the Istana Negara – the royal palace – on Wednesday morning for an audience with the king.

It’s customary for the Yang di-Pertuan Agong, as the king is known, to be briefed before the weekly meeting of cabinet ministers that follows. 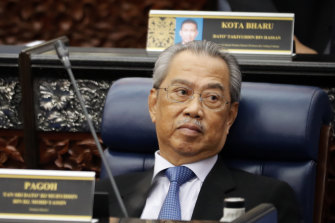 Muhyiddin Yassin is refusing to give in amid calls for him to resign.Credit:AP

This visit to the palace on the outskirts of Kuala Lumpur, however, was like no other.

Notoriously volatile, with alliances shifting on multiple party lines as well as factional and personality divides, Malaysian politics has outdone itself with a public standoff between king and Prime Minister that has loosened Muhyiddin’s grip on authority.

Malaysia’s kings, who serve five-year terms rotating among the country’s nine hereditary state sultans, have generally operated behind the scenes in their dealings with political leaders.

But King Sultan Abdullah has taken a different path in the past six weeks as dissatisfaction has grown with the government’s handling of COVID-19 and use of emergency powers.

In June, he pushed for the resumption of parliament, which had been suspended since a state of emergency was declared in January. Then last week, as MPs finally returned for a special sitting, he delivered an unprecedented rebuke of the government, accusing it of undermining his role as head of state by not seeking his consent before revoking a handful of laws it had introduced during emergency rule.

Malaysia’s King Sultan Abdullah Sultan Ahmad Shah has been critical of the government.Credit:Malaysia Department of Information

Seizing on the royal rift, the biggest party in the ruling coalition, the United Malays National Organisation (UMNO) has moved on Muhyiddin, whom it has sought to dislodge for months.

UMNO president Ahmad Zahid Hamidi fronted a late-night news conference on Tuesday, flanked by 10 other MPs he announced were pulling support for the government, which he claimed was guilty of “blatantly mocking his Majesty”.

He said he’d presented statutory declarations from the MPs to the king confirming their withdrawal, which on top of the resignation of an UNMO minister appeared to leave Muhyiddin with as few as 104 of 222 lower house seats, obliterating his already slim majority.

In Malaysian politics, however, things are rarely that simple.

Far from falling on his sword, Muhyiddin emerged from his meeting with the king on Wednesday insisting he retained a majority and saying he had the monarch’s approval to test it in parliament when it resumes in September.

“I am aware that my position as Prime Minister is often questioned,” he said in a televised address.

“Therefore I have informed His Majesty the King that I will determine my legitimacy as Prime Minister in parliament. A motion of confidence vote will be tabled when parliament convenes in September.”

“Only through this manner will my position as Prime Minister and the Perikatan Nasional ruling government be determined in accordance with the law and the constitution.”

Muhyiddin also lashed out at those who had shifted against him, saying he had ignored “pressure for me to interfere in the judiciary to free several individuals who are being prosecuted”.

himself is facing corruption charges and former Prime Minister Najib Razak, who was among the MPs to withdraw backing to Muhyiddin, is appealing a conviction and 12-year jail sentence over the 1MDB banking scandal.

The intensifying pressure on Muhyiddin has convinced adversaries to align against a common enemy. Opposition Anwar Ibrahim and his long-time political foe, twice former Prime Minister Mahathir Mohamad, momentarily rekindled their occasional alliance as they fronted a group of MPs who marched towards parliament on Monday, demanding Muhyiddin resign.

The two political heavyweights have been among those who believe he has used the COVID-19 crisis to hold onto power, first via the state of emergency, which ended on Sunday, and then the latest delay in parliament sitting.

Now, as the 74-year-old’s leadership will finally be put to the test, a month of furious horse trading begins.

If Muhyiddin can’t prove a majority, the question will be whether anyone else can.

Could Anwar, who has long coveted the top job and was three years ago promised it by Mahathir before the nonagenarian reneged, rustle the numbers? Will UMNO, which has run the country for all but two years since independence in 1957, want one of their own? Or will Malaysia have to entertain a minority government for the first time?

As the politicking kicks off, the key player in all of it may again be the king. It was he who installed Muhyiddin as Prime Minister in February 2020, not after an election but following another episode of backroom maneuvering that sunk the historic multi-ethnic government fronted by Mahathir.

“The king’s role is very pivotal at this particular juncture to determine who has the various majorities and the various positions of different actors, especially given the parliament is not scheduled for over a month,” said Bridget Welsh, a research associate with the Asian Research Institute at the University of Nottingham, Malaysia.

“The king, interestingly, is the kingmaker.”