This is the swanky Spanish bolthole by the sea where Stephen Lawrence murder suspect Jamie Acourt hid out from police over a drugs plot he is now serving nine years in a British jail for.

The convicted drugs trafficker and a fugitive flatmate paid £2,550 a month to rent the luxury Mediterranean hideaway from an unsuspecting wealthy Brit expat OAP.

The three-bed apartment, worth around £700,000, is on the first floor of a stunning 17-storey skyscraper in a private residential complex in Barcelona’s upmarket Diagonal Mar area.

Facilities for residents include an on-site gym, paddle tennis courts and a state-of-the-art outdoor pool. 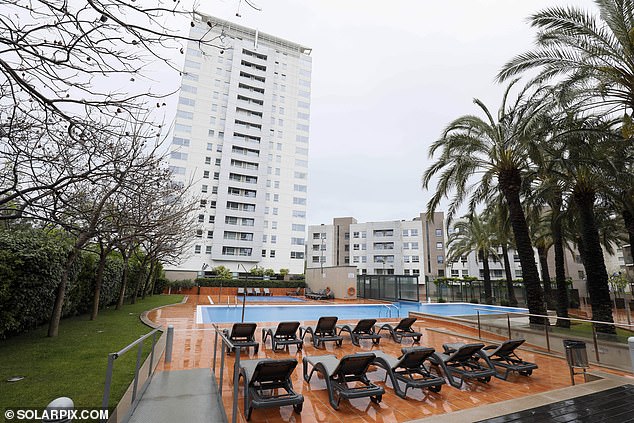 The three-bed apartment, worth around £700,000, is on the first floor of a stunning 17-storey skyscraper in a private residential complex in Barcelona’s upmarket Diagonal Mar area (pictured) 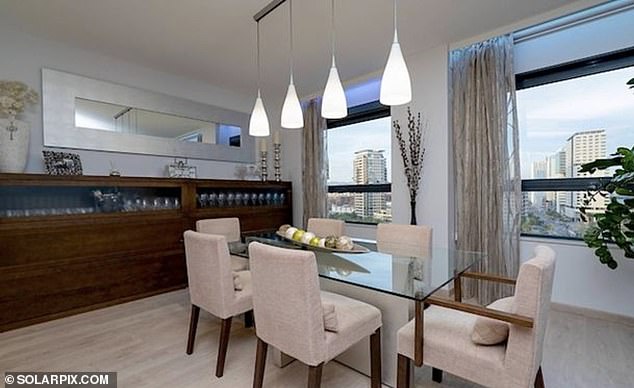 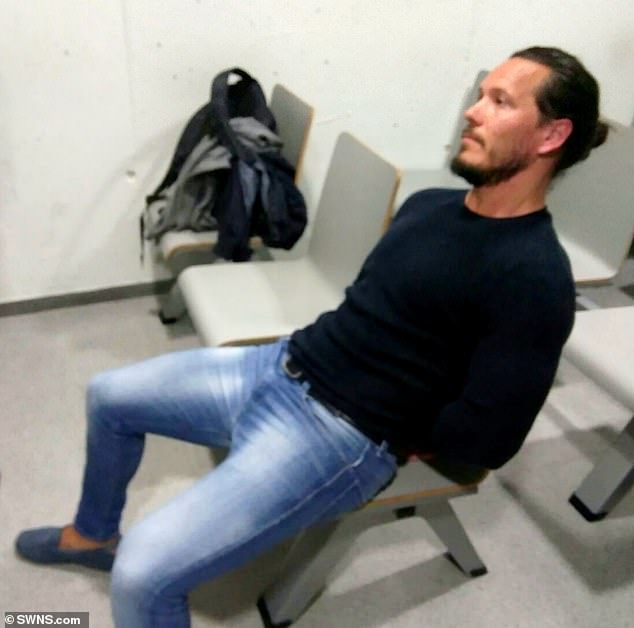 The exact location of convicted drug trafficker Acourt’s lair can today be revealed for the first time since Acourt’s May 4 2018 arrest by Spanish cops on a European Arrest Warrant.

Police were only able to confirm their suspicions he was living in the area after arresting him at an upmarket gym near Barcelona’s famous Sagrada Familia where he was registered under the alias of Simon Alfonzo.

Days later they picked up his flatmate and training partner Michael Lloyd, a cocaine smuggler and fellow fugitive who vanished after Acourt was held but foolishly went back to the upmarket neighbourhood to pick up clothes left in a nearby dry cleaner’s.

Officers from a crack international fugitives police team based in Madrid were tipped off Acourt could be using the Metropolitan Sagrada Familia gym by colleagues at the National Crime Agency.

The near two-and-a-half-year operation to catch him focused initially on the Costa del Sol resort of Marbella before switching to the Costa Blanca and finally Barcelona.

Although Spanish police say they arrested him virtually the first time they set eyes on him, they helped close the net with a surveillance operation targeting known criminal associates and close friends and family.

Last night former neighbours in the Catalan capital told how Acourt and his criminal pal splashed the cash on designer clothes, women thought to be prostitutes and bodybuilding supplements during their last months of freedom.

One said: ‘I never saw them come back drunk in the early hours but they seemed to like partying in the flat with gorgeous women. 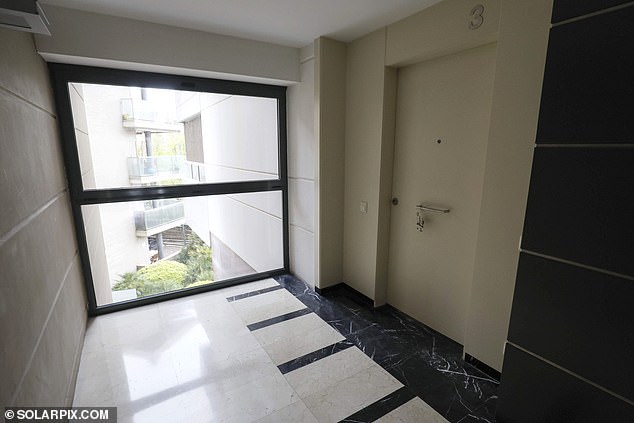 Facilities for residents include an on-site gym, paddle tennis courts and a state-of-the-art outdoor pool

‘Pretty girls who were quite obviously prostitutes would often turn up in taxis and and leave again after a few hours.

‘And I’d regularly see the men coming back from shopping trips with bags of expensive clothes.

‘I know the apartment was full of designer stuff left behind when they were arrested that the owner put into storage.

‘There was also lots and lots of protein powders and steroids and even a safe which they bought after they moved in and Acourt’s flatmate or a friend must have emptied after he was arrested because all that was left in it were a few coins.’

Another added: ‘They never caused any trouble while they were here and were always polite when I bumped into them.

‘Acourt had a woman to stay a couple of times that I took to be with his wife and was here with a young child.

‘One of the men also had his parents come to see him.

‘The owner turned up with them the day they moved in and even paid for a cleaner go round every week to try to keep the place tidy, although it was a mess when he went in after they had been lifted.

‘The two main bedrooms had double beds but the third had a smaller bed for a young child to stay in.

‘The owner spent a fortune refurbishing the apartment after he bought it and it was fully furnished with all the top stuff before Acourt moved in. 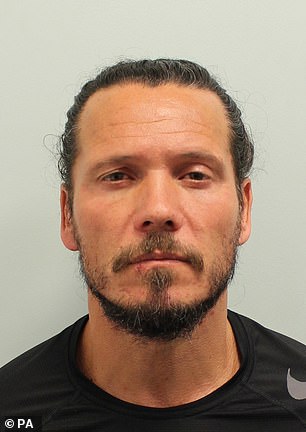 ‘He was mortified when he found out who he had been renting his flat to. He had to go to a police station in the city and Scotland Yard spoke to him on the phone.

‘I was told after the arrest Acourt had come to Barcelona from Marbella. He was friendly with another Brit who lived in a second skyscraper in the same complex here, an older guy in his fifties who had also moved up from Marbella, but he left a few months ago.’

The owner added: ‘I know only what I read in the newspapers and what the British police told me which was very little.

‘When the current tenants rented it I had to completely refurbish the apartment because the people who were staying there linked in with the previous tenant had completely trashed the place.

‘It was a filthy mess when they left it and they left loads of rubbish behind.

‘The situation is that the agency that let it to me put themselves into liquidation about six months after the tenant had moved in and presented me with a passport for this gentleman which was fake and said he was related to one of their employees which was a load of rubbish.

‘I was totally tricked.’

The Madrid-based international fugitives unit which helped in the capture of Acourt has arrested more than 20 people wanted by the UK since the start of last year.

Well-placed sources have said that although they never saw Acourt with his partner while he was on the run, her regular trips to Spain were linked to the areas where they suspected he was hiding out.

One Spanish insider said: ‘The information on his exact address came out after his arrest.

‘The info on the gym he could be using came from the NCA and it was acted upon immediately.

‘Police in Spain checked it out and confirmed it and mounted the operation to arrest him.

‘The two weeks prior to the arrest were the most intensive part of the operation.

‘The net was closed little by little and Acourt was held very soon after Spanish officers first laid eyes on him.

‘Intel received from the British police and worked on by Spanish police so the results of that work could be shared and pave the way for future leads, has been key to cracking where Acourt was.’

Another Spanish insider added: ‘It was made very clear to Spanish police from the outset that Jamie Acourt only worked with a limited circle of people he had maximum trust in centred on close friends and family and had known for a long time.

‘That made the operation to catch him more difficult in certain aspects but it also had its advantages because it was obvious which people needed to be looked at very closely.

‘Acourt’s arrest was an example of what a police operation between different countries should be.

‘His flatmate who was also wanted by the NCA was held while police were still watching the apartment, when he went to pick up some belongings from a dry cleaner’s in the area.’

A Spain-based NCA officer involved in the hunt for Acourt added: ‘I think we came close to catching him a few times before we did.

‘We linked him to another case we were working on in Barcelona to do with drugs at one point and that was generating intelligence as well.

‘It’s the norm for fugitives to be involved in some form of criminality while they are on the run and Acourt was renting an expensive flat and using an expensive gym that had to be paid for.

‘He was in Barcelona quite early on but might not have been living there at that point and he’s got contacts and fairly close family on the south coast of Spain.

‘I think he was keeping his head down while he was out there and was not some big character out there with the Brits.’

It is still not clear to this day how Acourt fled Britain, although police say they do not think the Italian passport he was using in Spain was the one he fled on and fugitives trying to escape Britain in a rush are known to hide in the back of transit vans or use genuine passports belonging to lookalike relatives.

Another NCA officer involved in the operation to catch him added: ‘The drugs case Acourt was wanted over was a Met case and they were doing what they could to furnish us with information, we were also doing our intelligence gathering in Spain, and we were then working with the Spanish around that as well.’

‘The Spanish were really up for getting him and over a long period of time and some really hard work was put in by their police international fugitives unit.

‘Acourt’s reputation put him in the spotlight but it makes sense for the Spanish to want to scoop these people up and help get them back into prison in the UK because more often than not they’re going to be involved in further criminality in Spain to fund their lifestyles.’

Both Acourt and his brother Neil were arrested after the stabbing of Stephen Lawrence by a gang of white men in Eltham in 1993 but were never convicted.

Two of the other suspects, Gary Dobson and David Norris, were convicted of murder in 2012 and jailed for life following a DNA breakthrough.

Jamie Acourt became the fourth of the five suspects in Britain’s most notorious racist killing to be put behind bars when he was jailed in December last year over a £4 million cannabis trafficking operation.

His brother Neil had already been jailed for more than six years over the plot.

Jamie fled to Spain in February 2016 after vanishing before police arrived at the home he shared with Terri-Ann Dean in Bexley, south east London, to arrest him.

His flatmate in Barcelona, who was on the run for almost four years, was jailed for seven years and three months at Birmingham Crown Court in November last year after pleading guilty to trying to import cocaine into Britain.