The name’s Johnson, Boris Johnson: Action-man wannabe Tory leader poses with a number of female admirers and sprints round doorsteps while campaigning for local elections (but one canine resident is beyond his charms!)

The Tory party’s Boris Johnson was spotted out on the campaign trail posing with female admirers and dashing to people’s doorsteps ahead of local elections next week.

The former Foreign Secretary was out campaigning in Walsall and Tamworth on Saturday afternoon with the local Conservative party to get the public’s backing for Thursday’s vote.

Meanwhile Labour leader Jeremy Corbyn was out and about in sunny Peterborough as he tried to rally support for the party.

Six Mayoral contests will take place across England and 248 councils will be counting votes.

Walsall – where Johnson was campaigning – is a knife edge battle. The Tories gained great ground in traditional Labour strongholds in 2015’s elections, with Walsall being one of those places.

About 110 Conservative candidates are set to be elected before a single ballot is cast as no other candidates are contesting the seats where they are standing. 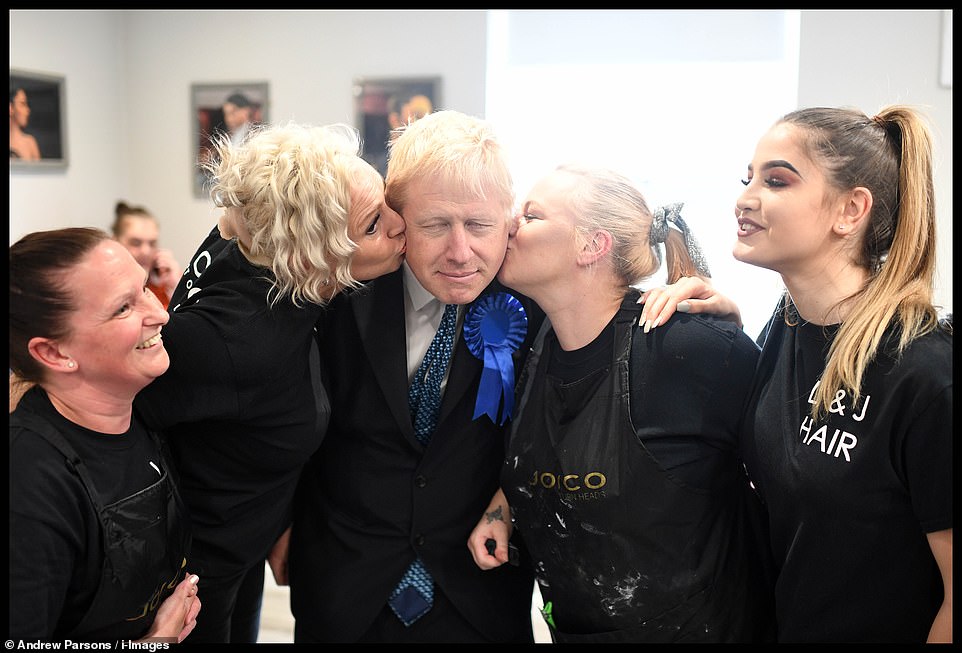 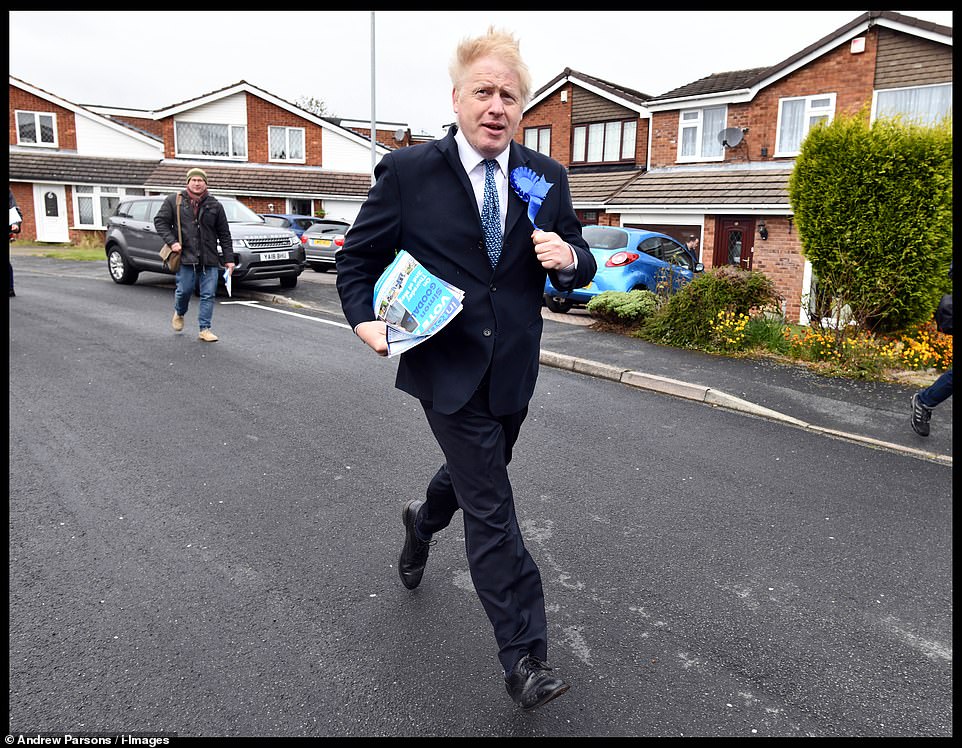 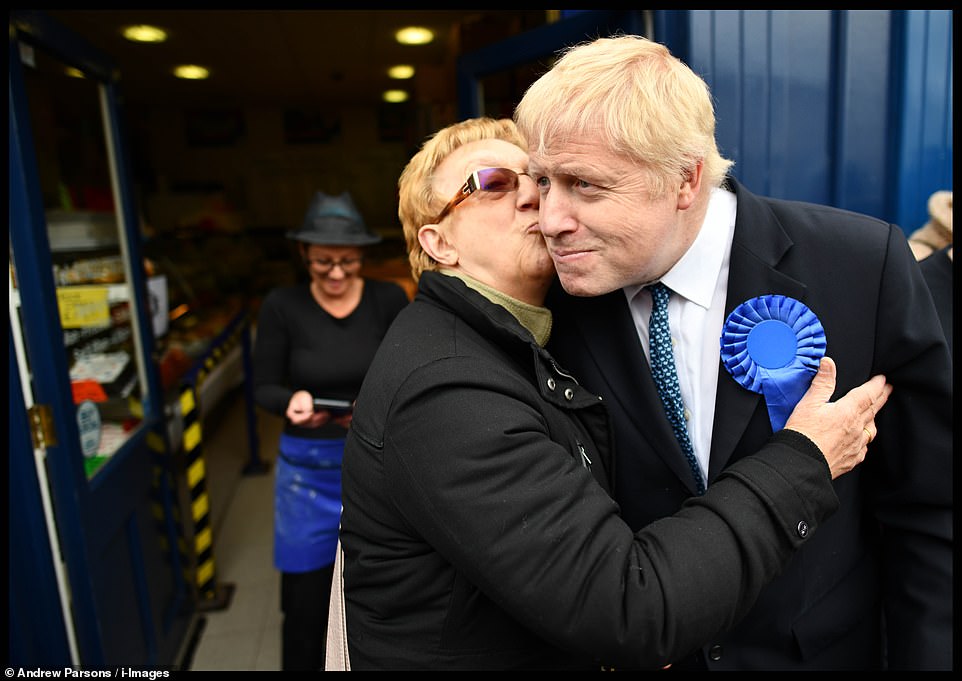 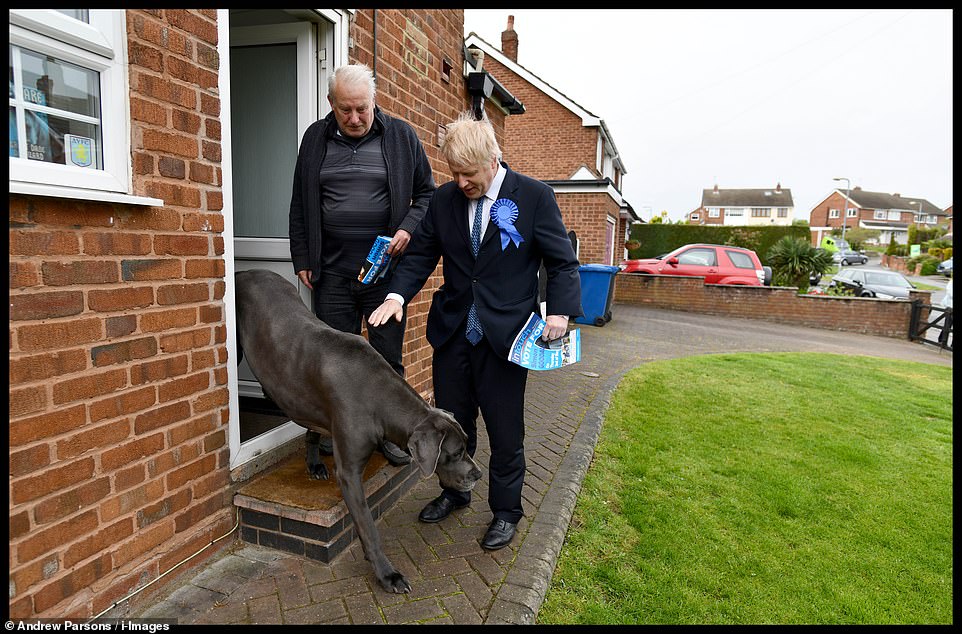 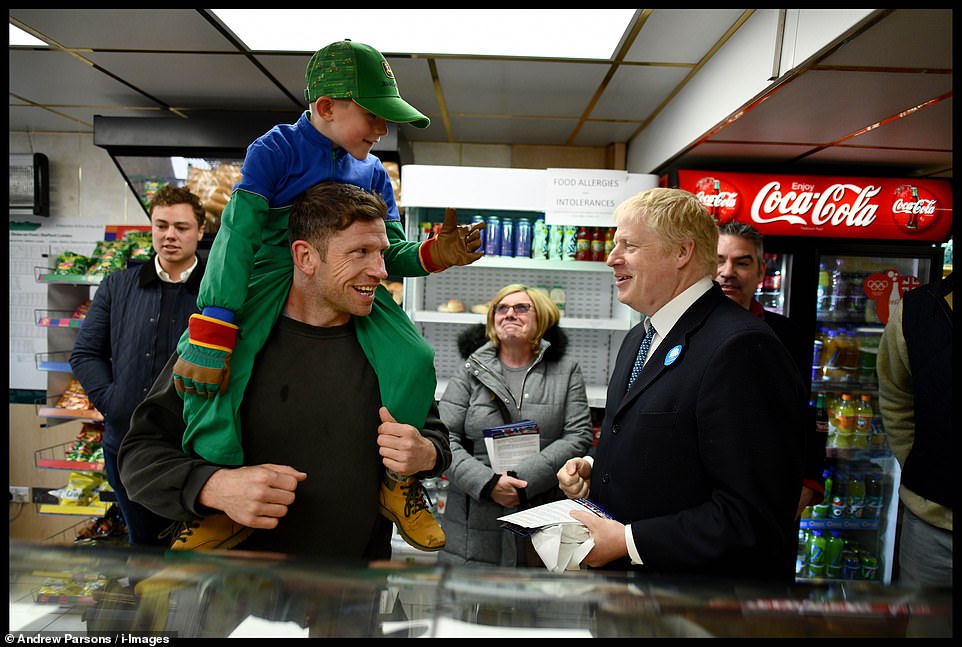 Johnson laughing as he chats to voters in a convenience store in Atherstone, Warwickshire on Saturday

Only a handful of Labour and Liberal Democrat candidates will be elected unopposed when voting takes place at 248 councils in the biggest set of polls in the four-year cycle.

More than 25,400 candidates are contesting about 8,400 council seats, according to the latest figures gathered.

Polls will also be held for six directly-elected mayors, including in the new North of Tyne devolved regional authority. 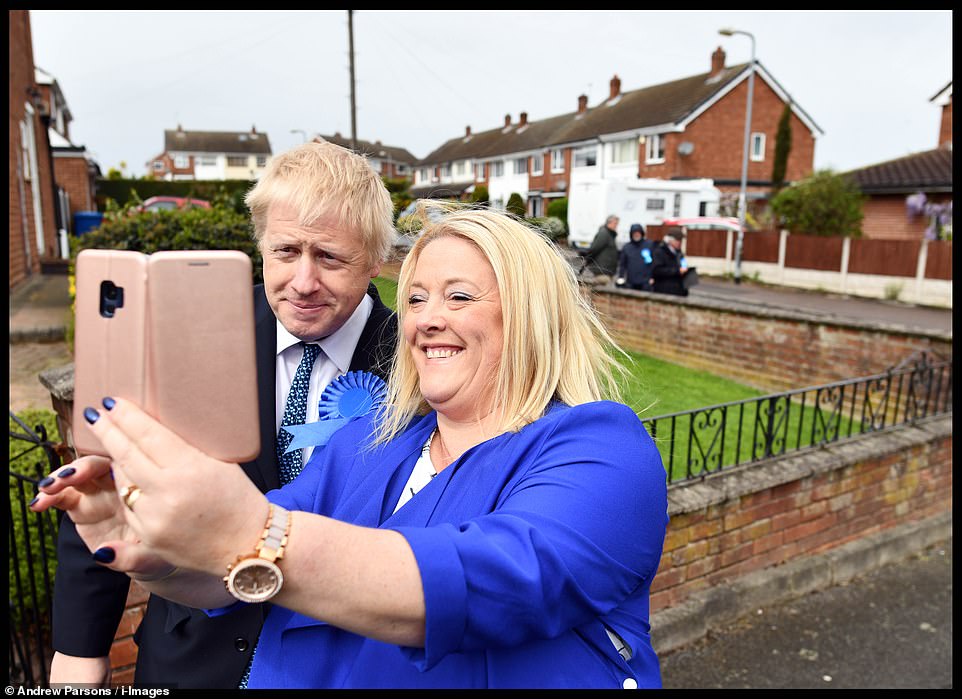 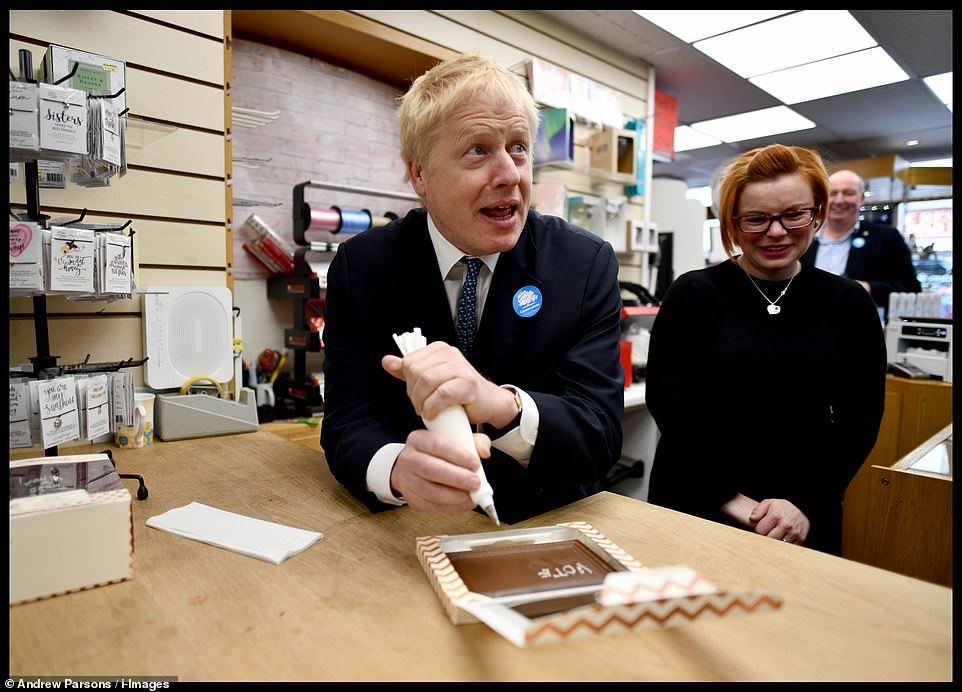 Bake off: Johnson tried his hand at piping icing onto some baked goods at a store in Atherstone on Saturday 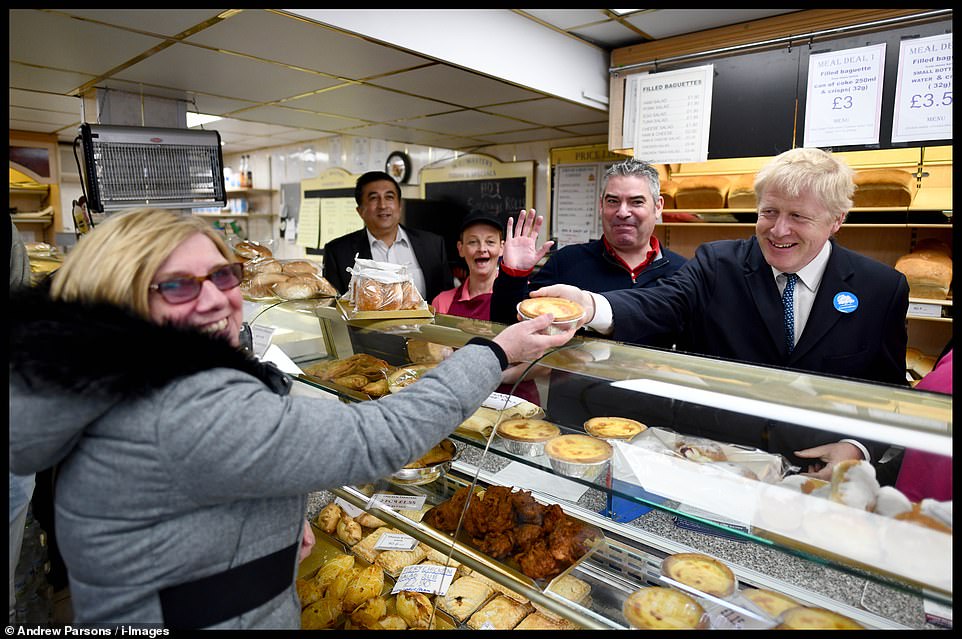 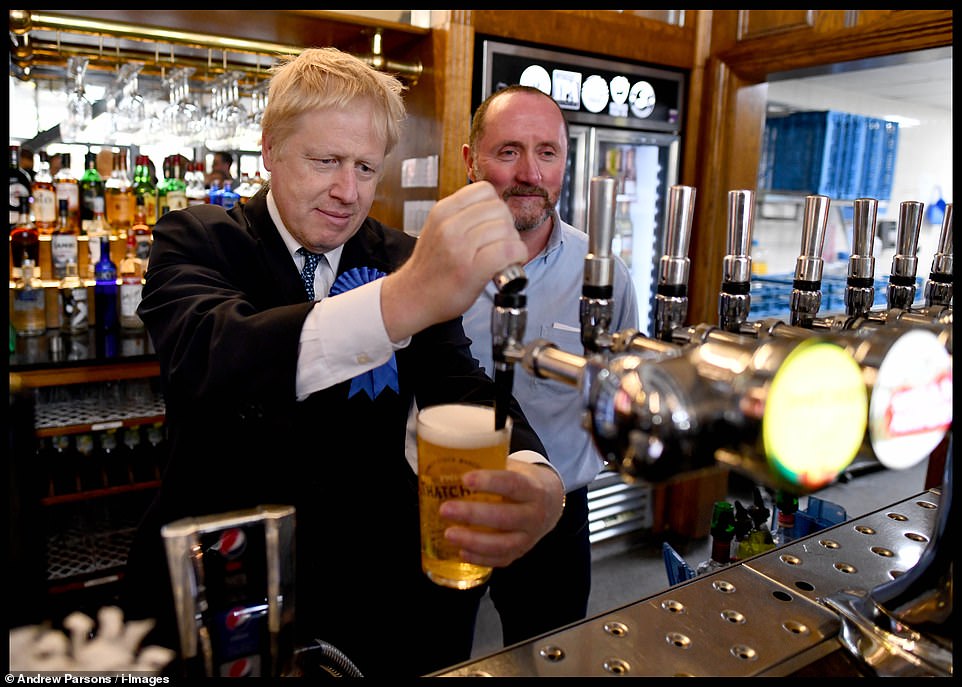 Johnson appears focused as he pulls a pint at a local pub in Walsall, kindly watched over by the barman to ensure things run smoothly 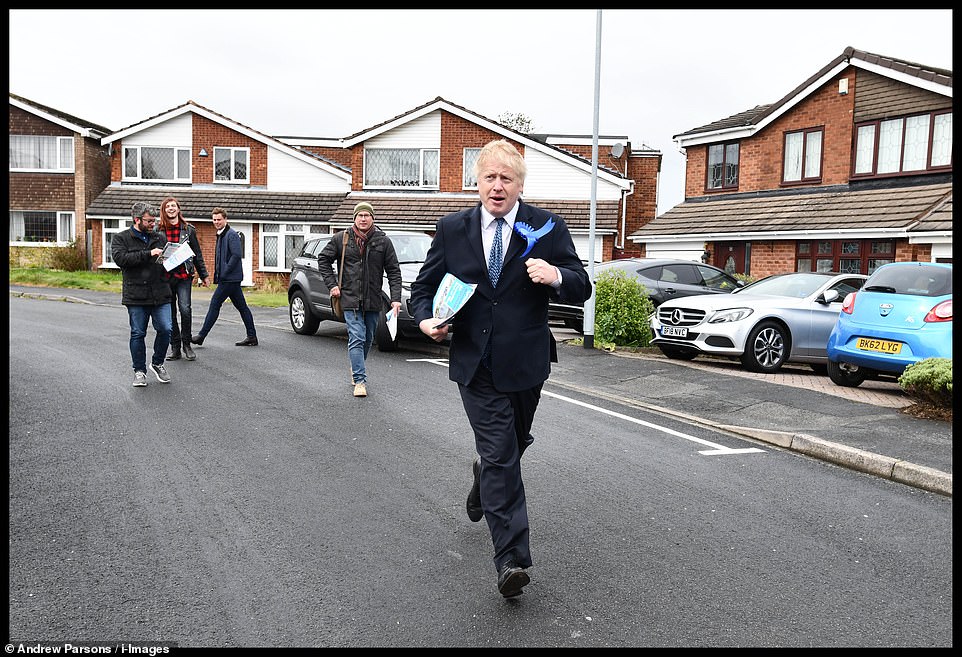 Johnson broke into a light jog as he moved between houses at a rate of knots on Saturday, covering Atherstone, Walsall and Tamworth 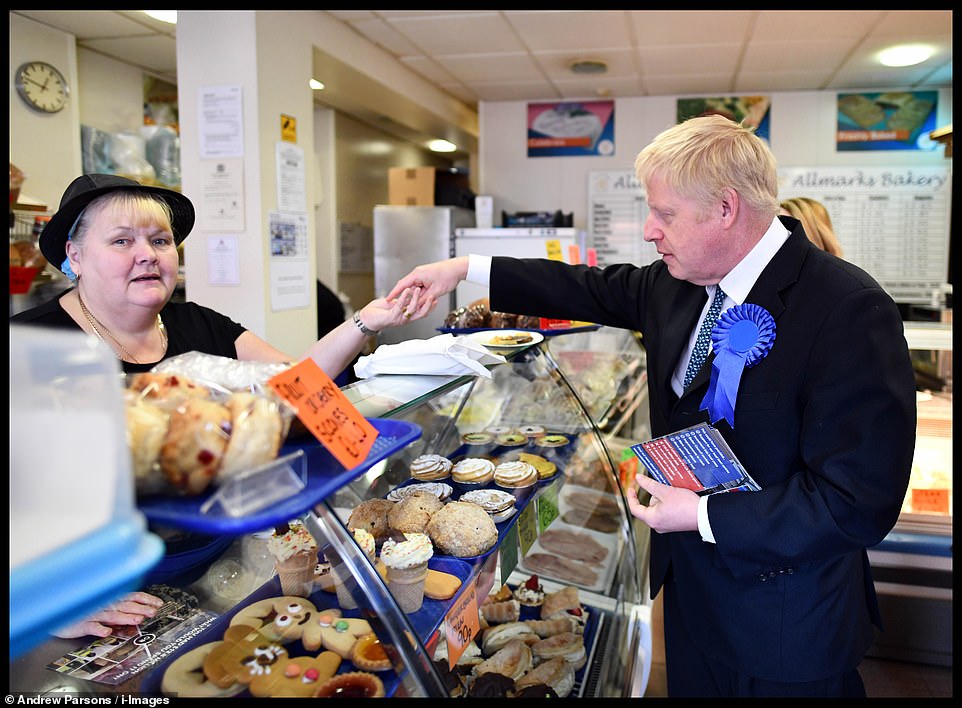 Stopping for a snack: Johnson was pictured handing over some cash in this bakery as he grabbed a bite to eat for some much-needed energy on the campaign trail

Conservatives are fielding about 8,000 candidates in the council elections, which suggests the party is contesting about 95% of the seats available.

This is a higher proportion than in the previous two elections in the cycle in 2011 and 2015 – a point highlighted in analysis by elections commentator Rob Hayward, the Tory former MP Lord Hayward.

Labour has about 6,500 candidates, fighting 77% of the available seats, a much lower proportion than the Tories but still higher than in 2011 and 2015. 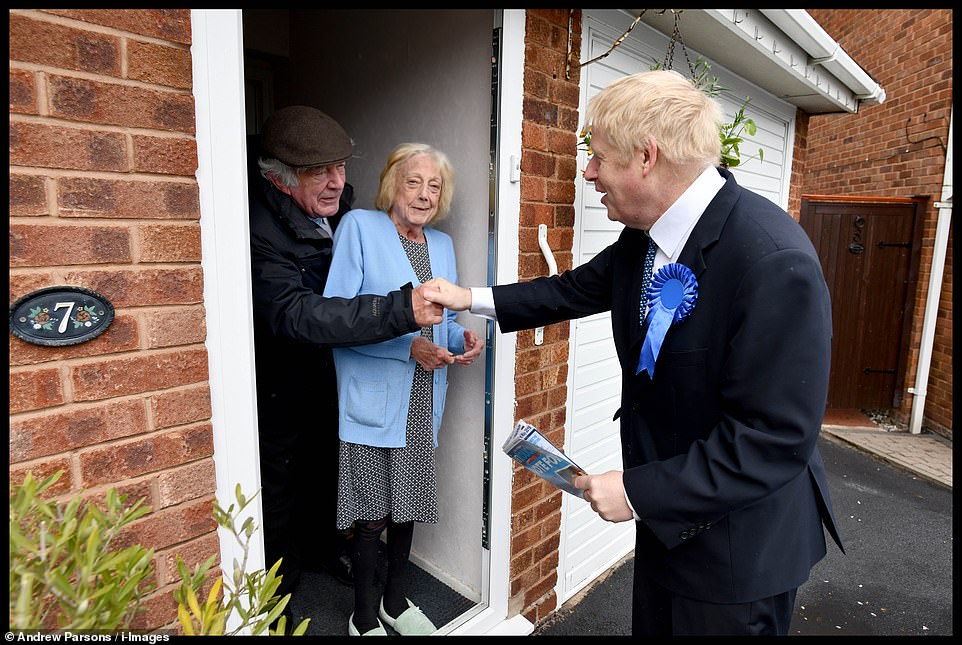 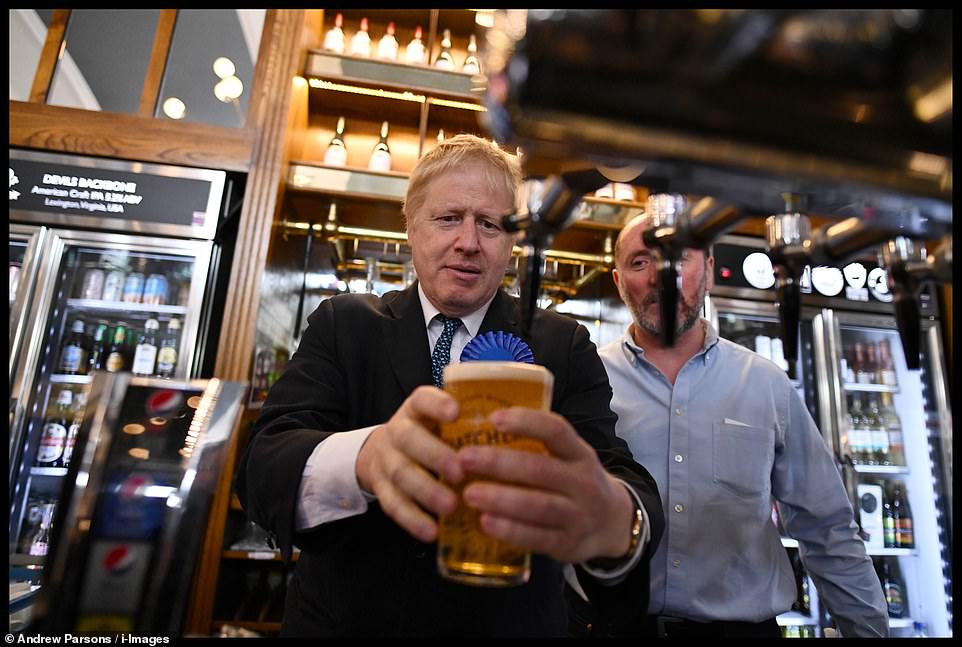 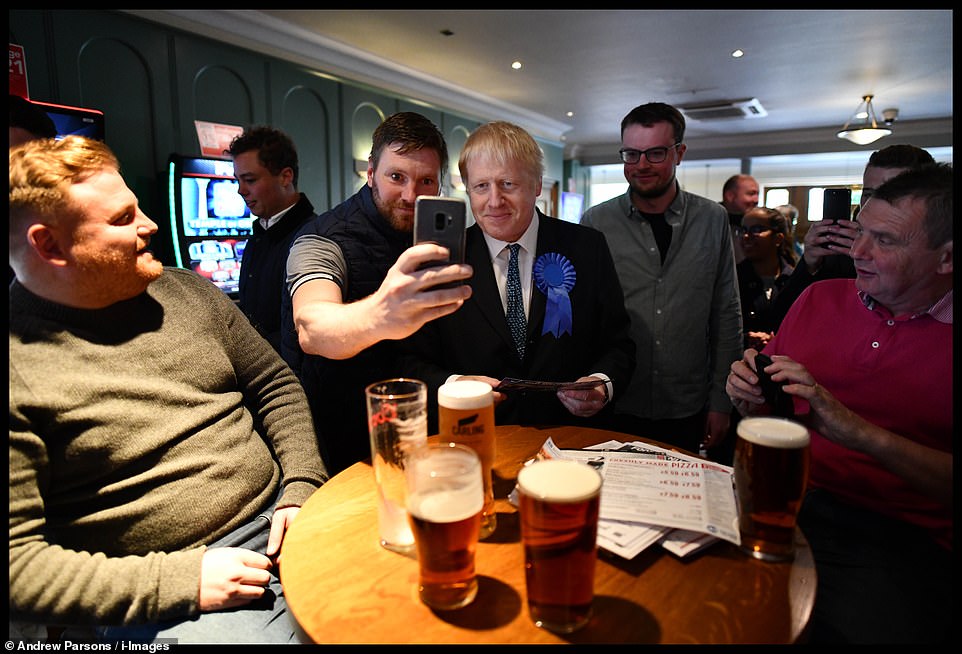 Selfie time: Johnson smiles as he gathers round a table at a pub in Walsall on Saturday, as locals appeared overjoyed to be with the senior Tory 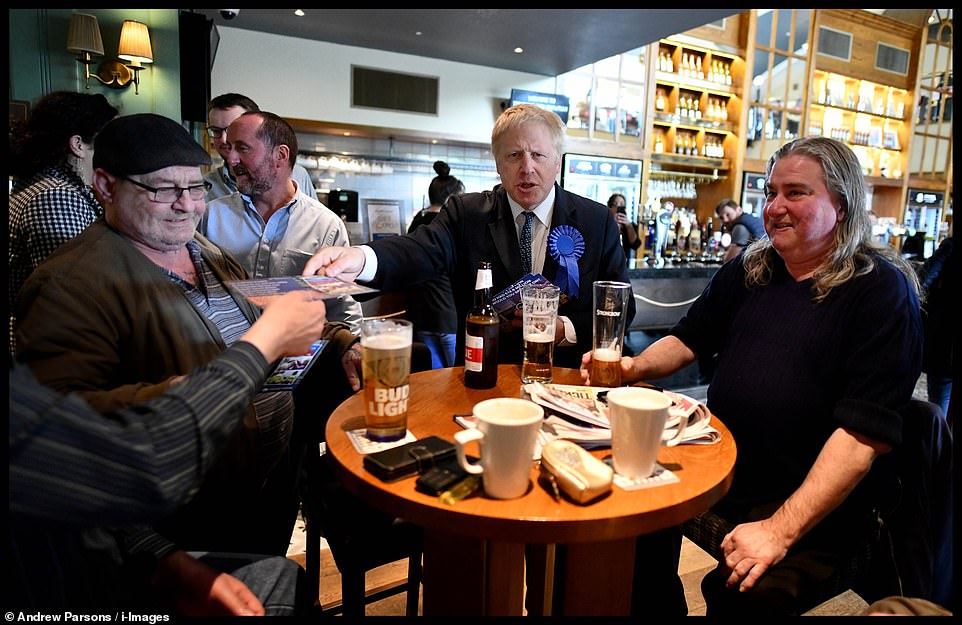 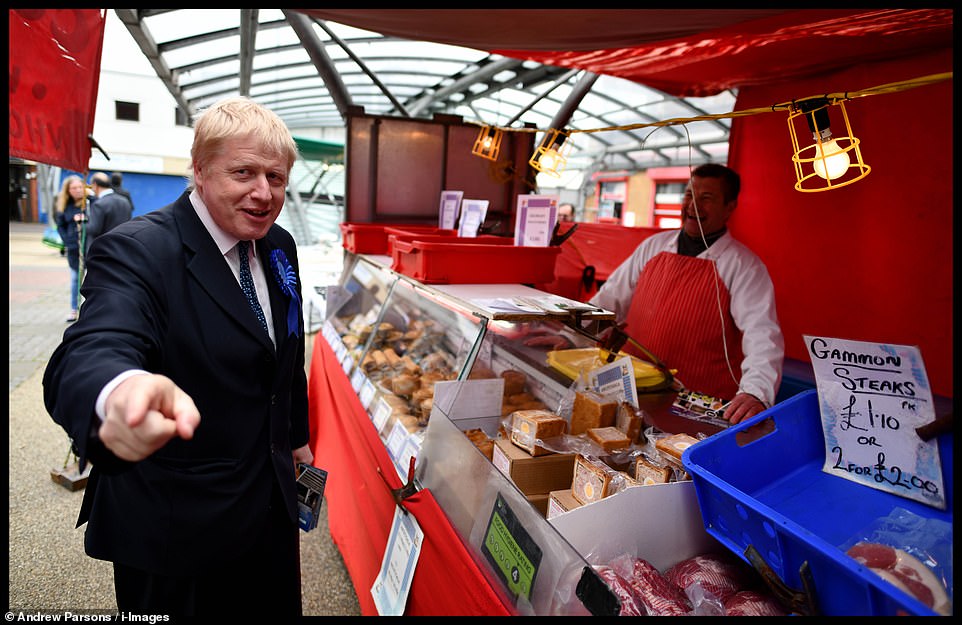 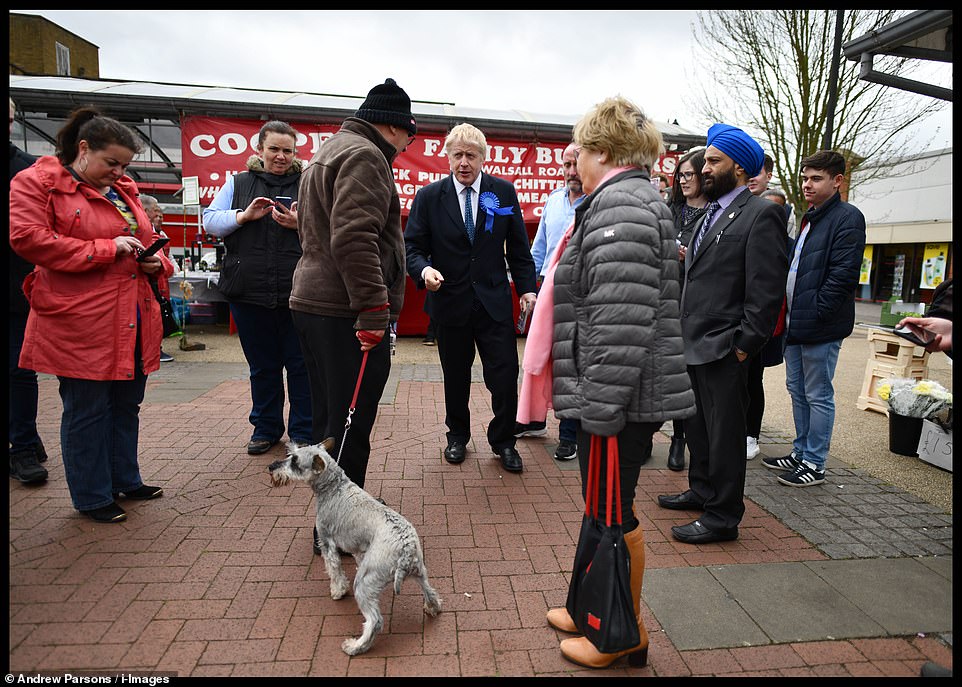 Conservatives are defending about 5,000 of the seats and have the most to lose after making solid gains in the 2015 polls. Those coincided with the general election in which the Tories, then led by David Cameron, won a 12-seat majority.

Some 8,650 councillors are due to end their terms of office before polling day, but there will be about 450 fewer councillors elected because of an overall reduction in seats at councils where there have been boundary changes and because of new councils with fewer seats resulting from local authority mergers.

The elections will see polls at five new authorities that are replacing 15 existing ones. They are: Bournemouth, Christchurch & Poole; Dorset; East Suffolk; West Suffolk; and Somerset West & Taunton. 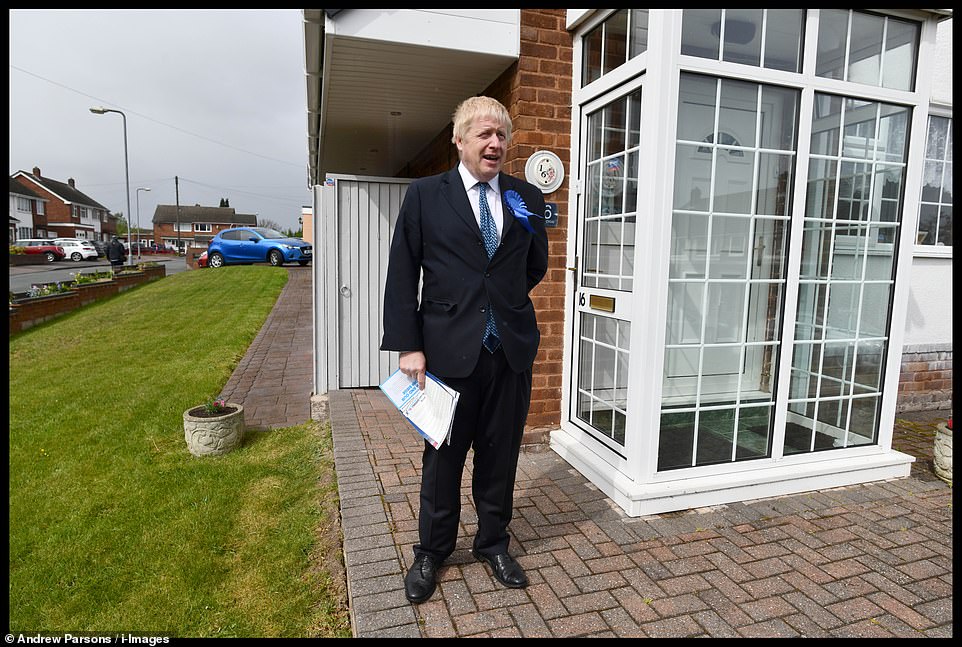 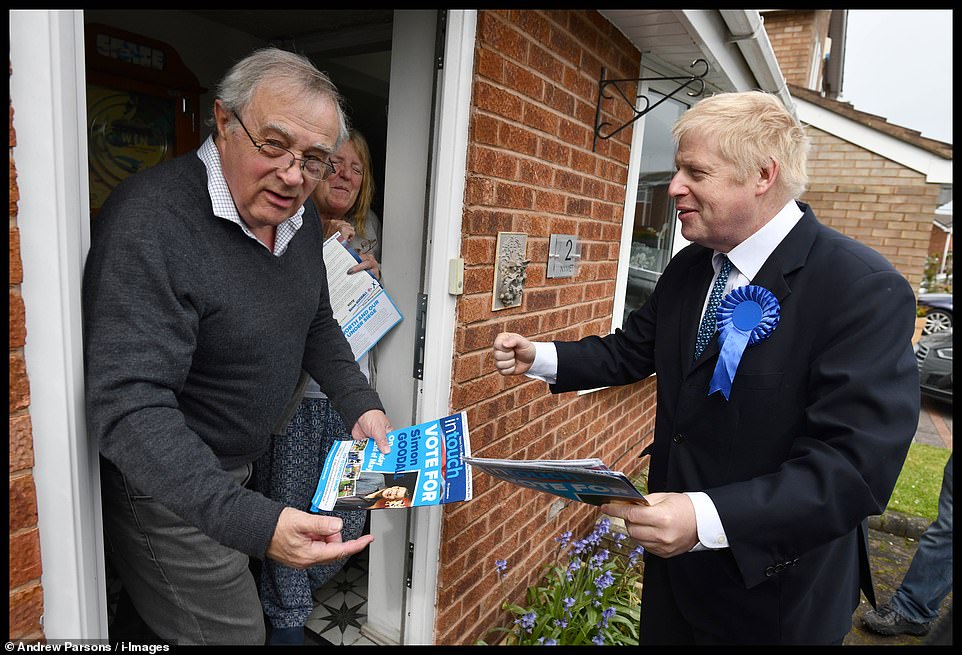 Johnson greets a couple at their front door in Atherstone on Saturday, handing them a Tory leaflet saying: ‘Vote for Simon Goodall’ 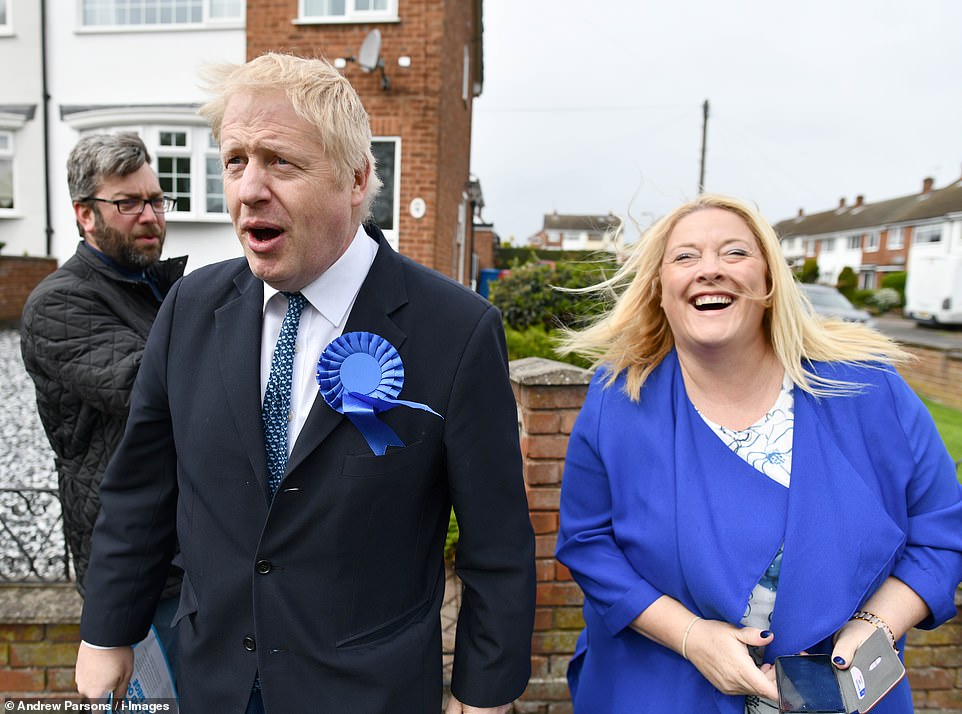 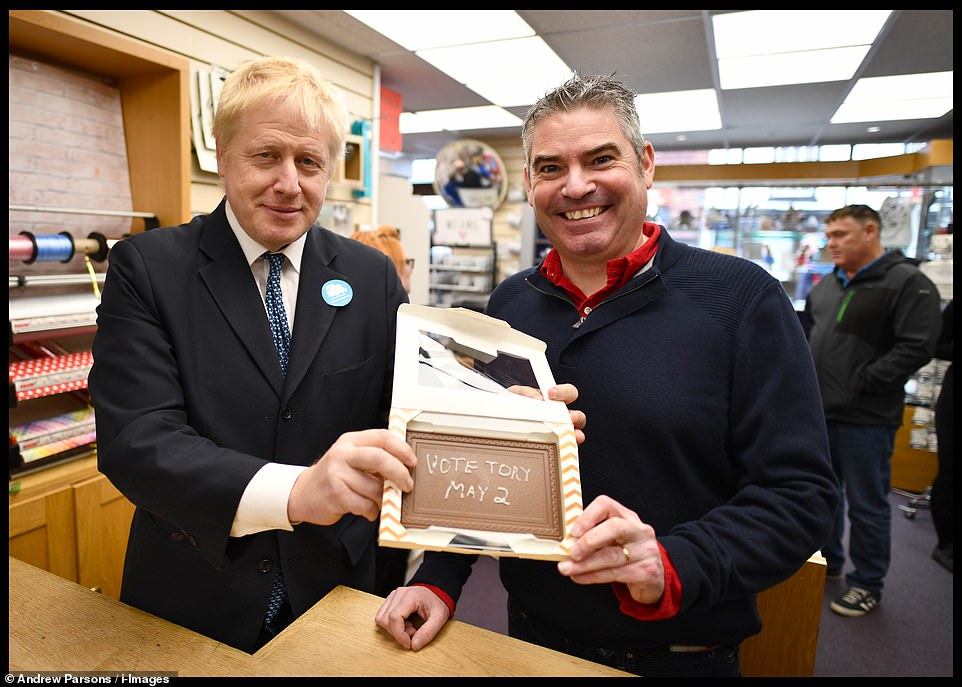 Boris holds forth some piping work at a shop in Atherstone, the sign reads: ‘Vote Tory May 2’ 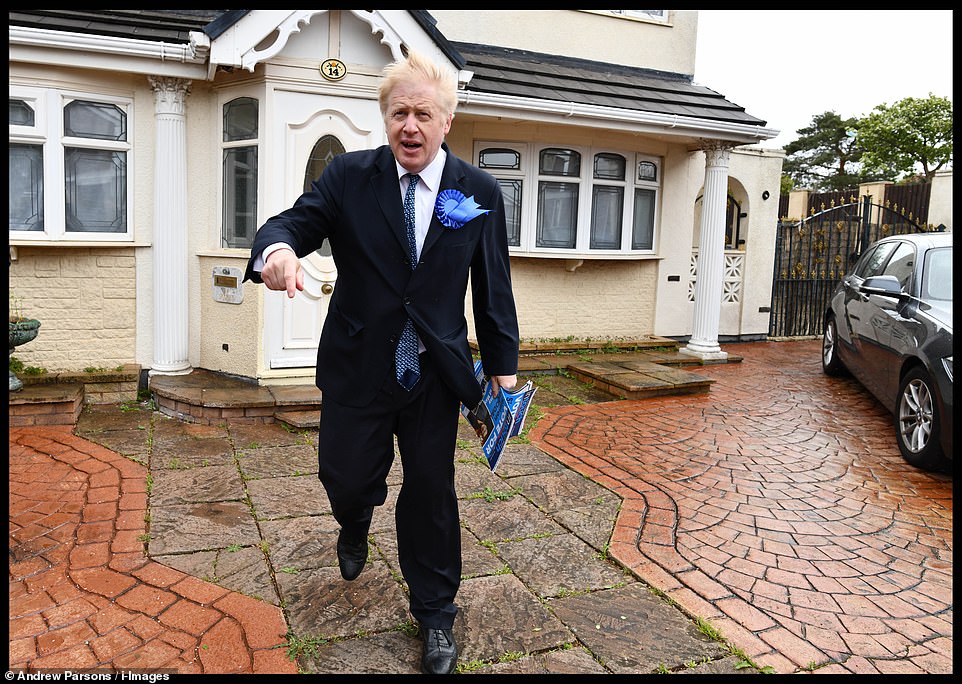 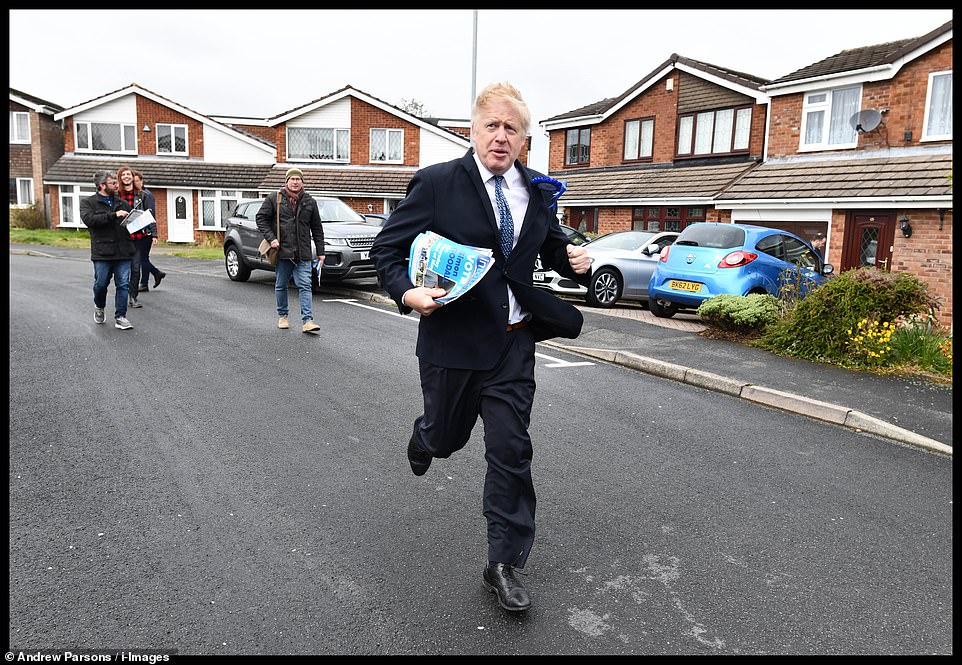 Action man: Johnson – no stranger to some light exercise – runs through the streets of Tamworth on Saturday

The trials, which will require voters to produce various forms of ID before they can vote, follow similar pilots at five councils last May.

Polls also take place on May 2 at all 11 local authorities in Northern Ireland. 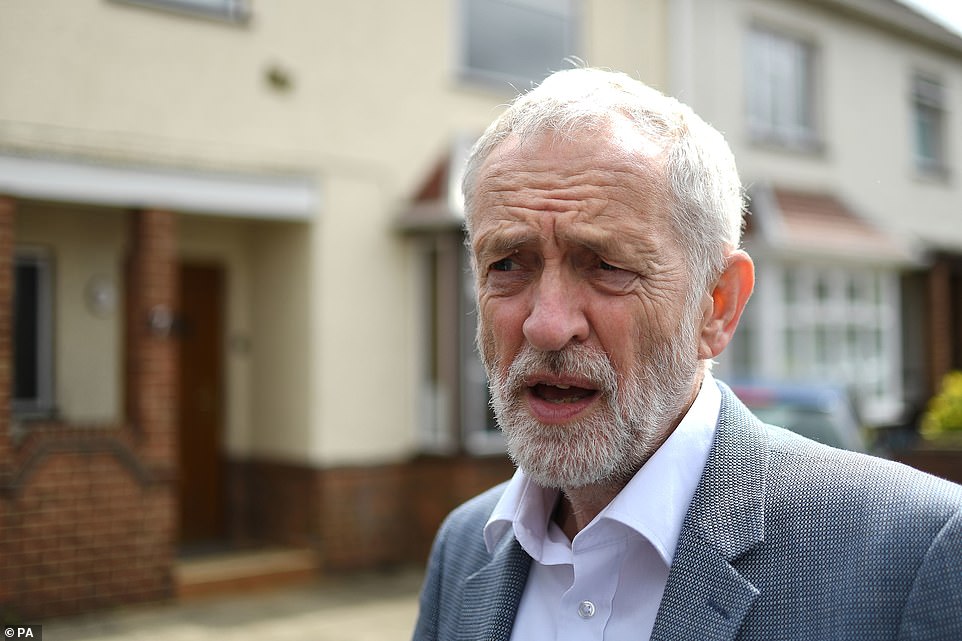 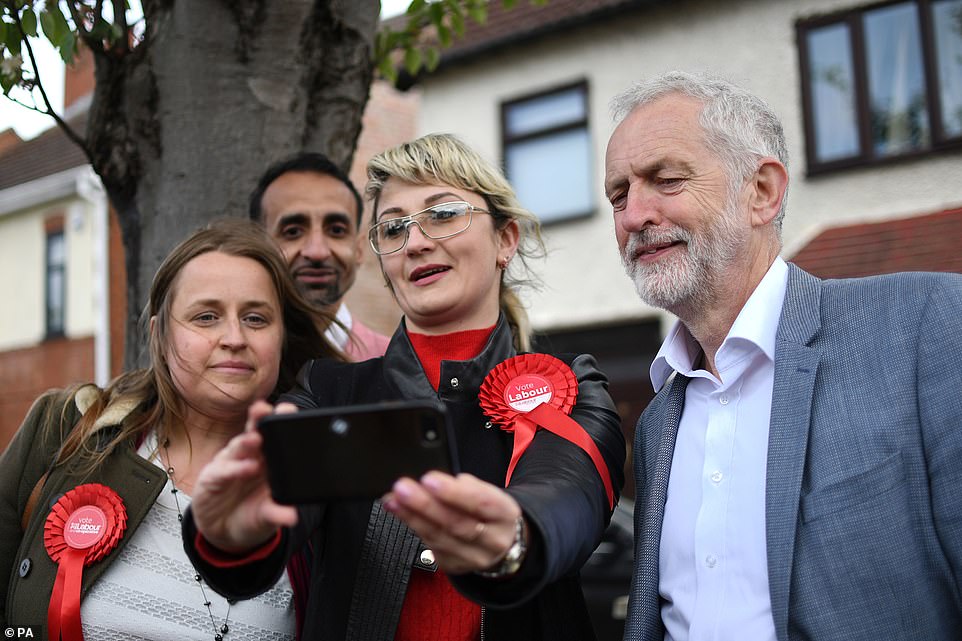 Labour leader Jeremy Corbyn poses for a selfie with Lucinda Robinson, Shaz Nawaz and Katia Yurgutene during campaigning in Peterborough 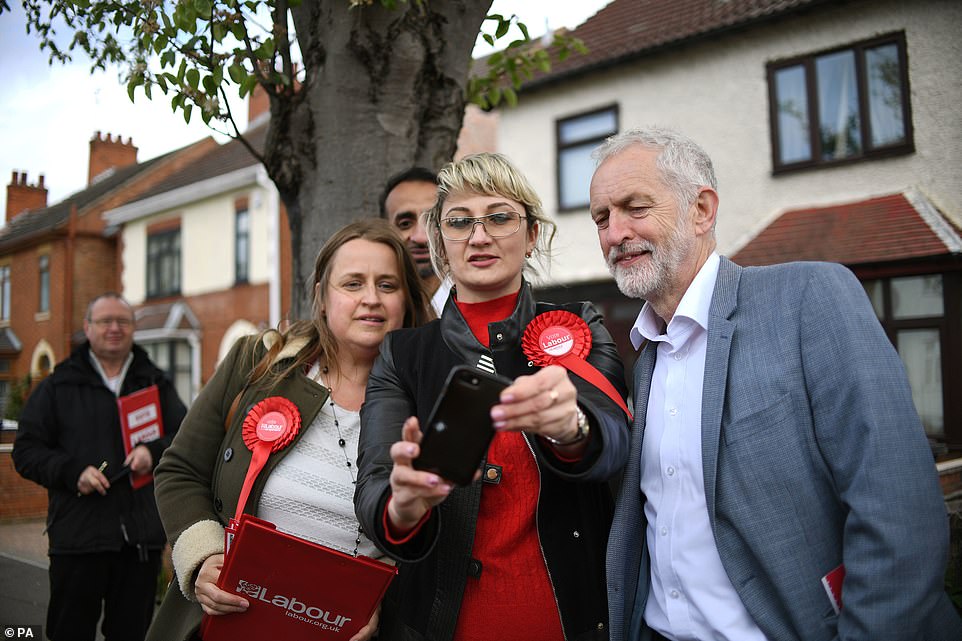 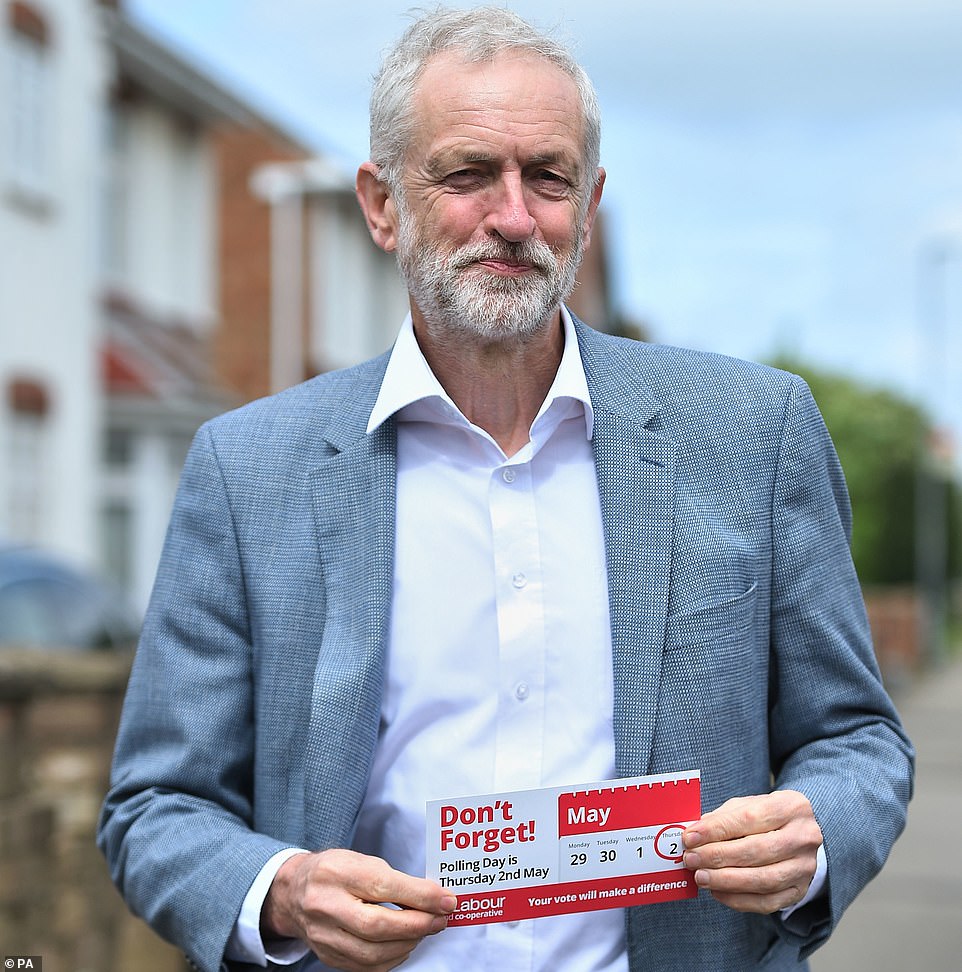 Corbyn holds a Labour leaflet which says ‘Don’t forget’ with the May date circled, as he tries to drum up support for his party on Saturday 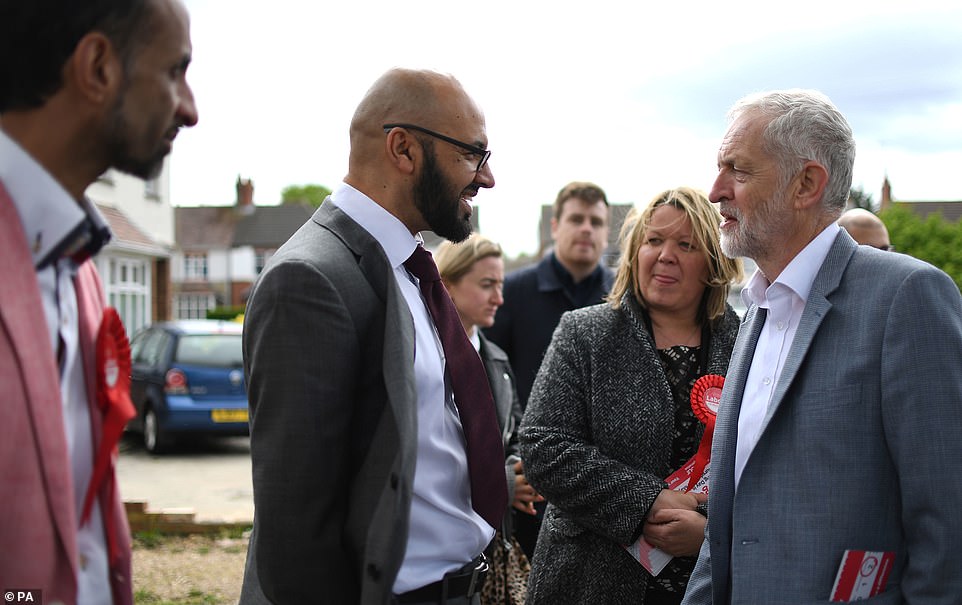