Penghu, Taiwan Strait: In his windswept shop on a small archipelago in the middle of the South China Sea, Chen Kuo-Chung collects buoys from the stretch of water that divides Taiwan from China.

The buoys are dipped in red, yellow, black and blue, and then plastered with blessings. The local artist, ice cream merchant and pork-floss distributor hopes for peace but is prepared for war. 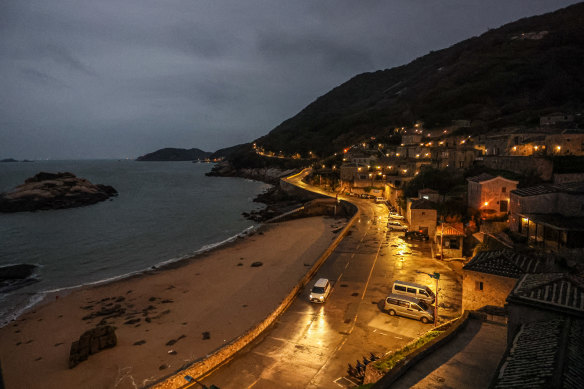 The historical Chin-Be village on Matsu island, Taiwan Strait, where locals say they have witnessed missiles being fired during the PLA live fire drills.Credit:Daniel Ceng

“If China really attacks, we will all defend Penghu,” he says. “We have been trained by the military. It will be easy for us to use weapons if needed.”

Chen is 60 but looks 48. The sun and sea that beat down on this two-kilometre-wide row of islands in the middle of one of the world’s most disputed areas have been kind to him. He sleeps early and rises at daybreak. So do most of Penghu’s inhabitants, a Taiwanese island chain that China claims as its own. 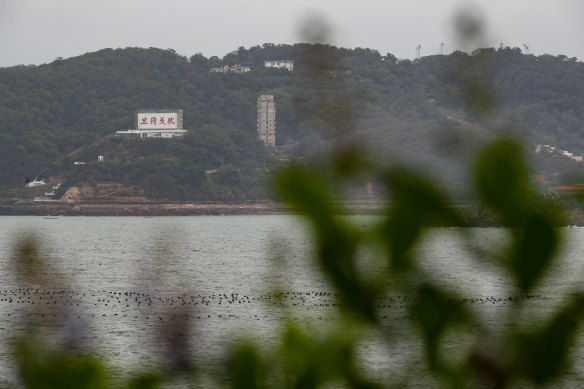 A billboard with a message reminding people to be ready to fight is seen on the Taiwanese island of Matsu that is close to Fujian, China.Credit:Daniel Ceng

Like the artworks in Chen’s shop, most everything comes from the sea in Penghu. The walls in his village of Xiyu are made of coral, the statues are of fishermen. Boat captains sit first at dinner. The two-lane motorway connecting the archipelago is buttressed on both sides by the ocean. It batters a landscape filled with crabs and cacti. The native plants are so short they named one stretch of road lined with six five-metre trees “the tall-tree highway”. 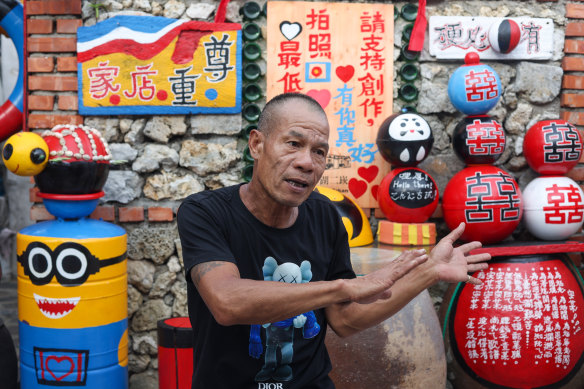 The wind that starts at the end of September and goes until March will not let many plants grow above head height. Locals call it a constant “light typhoon”. To protect the crops, trenches and barricades made of coral have been built all over the island. They plant Taiwanese flags in the soil to stop the birds from eating the local green onions.

“They are better than Chinese chives,” says Chen Peng-chieh, a taxi driver.

Penghu, like many isolated and agricultural islands around the globe, is bedevilled by the economic forces that have seen young people leave as access to information about the outside world has exploded. That it sits on the front line of Taiwan’s defence is of little immediate concern to its inhabitants who worry more about fishing stocks and whether there will be new generations to replace them.

But Penghu’s geographic reality has dominated questions about its future and a local political campaign. Taiwan’s governing party, the Democratic People’s Party [DPP] has made Saturday’s local midterm mayoral and local council elections – usually dominated by concerns about potholes, garbage delivery and subsidies – about national security. It has emphasised the threat of China at every opportunity.

“The DPP has a very important agenda for the election this time,” says its candidate to become county head of the islands Chen Kuang-fu. “It is to protect the land and to fight for Taiwan. How Taiwan performs in democracy, politics and economics should be cherished by the whole world.” 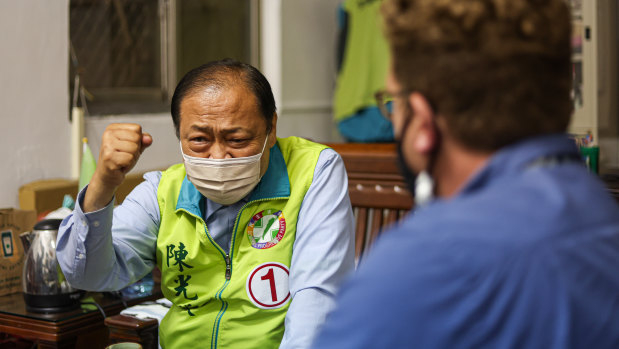 From the south-western edge of this island, 500 kilometres from Taipei, a Chinese armada would first emerge over the horizon if Beijing were to launch an amphibious assault on Taiwan. On its furthest point, a lighthouse built by the British in the 1870s sits next to a military base built to protect Taiwan.

Below, jagged cliffs give way to pebbly beaches and winding villages that snake up the escarpment like Portofino, Italy. Inside, barricades, runways and walls painted in camouflage pockmark the islands. China would have to seize control of all of it if it were to land on the Taiwanese mainland and prevent a rearguard action by Taiwanese forces.

“In terms of both economics and tactical strategies, Penghu is really important,” says Chen. “Since Penghu is in the middle of the Taiwan strait, transportation here is crucial.”

The tactics have divided voters. “I think they are trying to make us scared,” says 50-year-old retiree Jay Lee.

“The government should make people feel secure. China is like a fierce hound. People should not try and make it angry.”

Taiwan’s opposition, the Kuomintang, has run a campaign based on local community needs and tried to veer away from geopolitics. The Kuomintang fought a civil war with the Chinese Communist Party in the 1940s before fleeing to Taiwan but is now seen as more sympathetic to cultivating ties with the Chinese mainland. 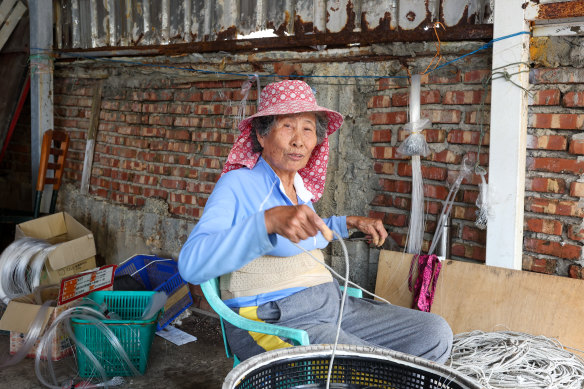 Chen Wan-Hao works on fishing tools at a village near Xiyu Island, Penghu, an archipelago of 90 islands and islets in the Taiwan Strait.Credit:Daniel Ceng

Chen Wan-hao, 82, a grandmother to 26 who makes fishing lines in Baisha village, says voting for the Kuomintang would be like “voting to move straight to China”.

“If China attacks, we may die, but as long as our offspring are alive, that’s fine,” she says.

Lee is more cynical. “I’m not worried about it at all. If China really attacks, Kinmen and Matsu would be the first to be hit, not Penghu.”

The lights flicker over the horizon on the islands of Matsu. Twenty-five minutes away by boat lies the Chinese coast of Fujian. 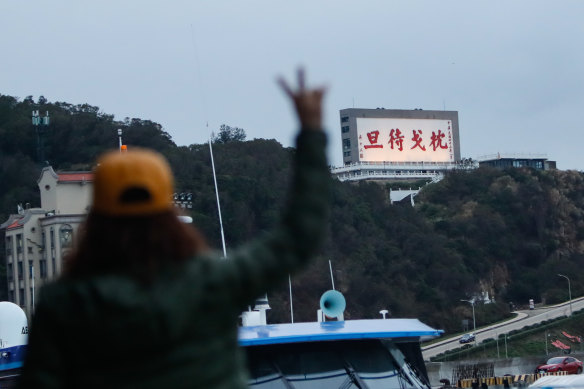 A tourist reacts near a billboard with a message reminding people to be ready to fight that is seen on the Taiwanese island of Matsu that is close to Fujian, China.Credit:Daniel Ceng

Down the Minjiang River, the People’s Liberation Army, waits. The Longtian and Huian airbases were expanded by President Xi Jinping in 2020. Chinese warplanes can reach Taipei in seven minutes from Fujian.

Taiwan’s Chief of General Staff Huang Shu-kuang ordered the military to conduct a review of the formation and tactical position of air defence forces in response to the expansion last year. Nearby, sits one of China’s amphibious bases used for housing boats that can land troops on the ground. Pingtan Island, 80 kilometres south of Matsu, was the stage for China’s live-fire exercises when US House Speaker Nancy Pelosi landed in Taipei in May. Kinmen is even closer than Matsu, but it is too near to the Chinese coast to be a threat and less strategically significant.

The Taiwanese military trucks that patrol Matsu are too narrow for its streets. When the local infantry launches live ammunition it cracks in the night and fires up the sky. The language here is closer to Fujian and Fukien, but most residents are patriotically Taiwanese.

“Always be ready to fight even when you are sleeping,” says a ten-metre-tall stone sign carved in red into the rock of the bay opposite. 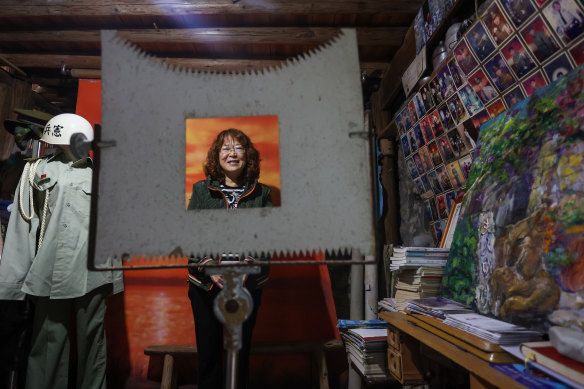 Wang Chun-chin reacts to the camera inside her family’s gallery and coffee shop popular among Taiwanese soldiers on the island of Matsu, close to Fujian, China.Credit:Daniel Ceng

On the other side, Wang Chun-chin patrols her Furen coffee shop, army picture gallery and fish noodle dispensary. She remembers sheltering in her shop as a teenager when Chinese bombs fell on Matsu.

“We hid in bomb shelters, we’ve seen people die, relatives losing their hands because of artillery or bombing, missing legs because of attacks,” she says. “These younger generations have not been there like us.”

But she says she is done with feeling anxious about the threat of her home of 55-years being taken over by China. “These threats happen on a daily basis. How much longer can we worry?”

Tsao Erh-yuan, the local Kuomintang candidate in Matsu, says he thinks Matsu and Taiwan will remain safe “if Taiwanese independence is not declared”. 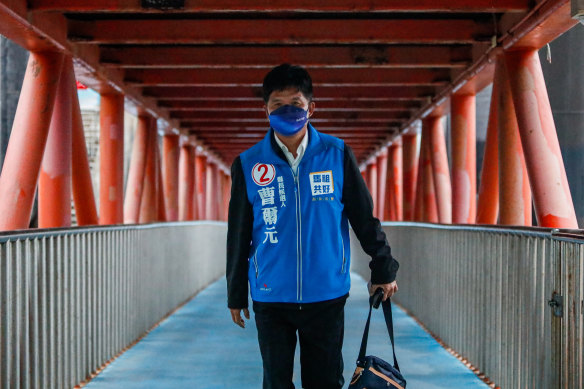 “Matsu has been a key partner with mainland China in terms of trade and economic ties. It’s important to keep those links operating.”

In Qinbi, on Matsu’s second-largest island of Beigan, Chen – who asked to be identified only by his last name – wanders between bunkers and the century-old homes that dot the coast of this stone village on Thursday morning. The number of military exercises on both the Chinese and Taiwanese side have surged in this area this year. Like some of his compatriots on the islands that separate the superpower from its democratic neighbour, he walks with a dose of realpolitik.

“We will follow whichever power takes over,” he says. “What can we do?”