Amid feverish diplomacy, a couple of issues keep cropping up, including NATO and a gas pipeline. Why?

In the latest volley of accusations and demands in the Ukraine crisis, a few topics have surfaced. Since Moscow has arguably orchestrated the crisis around Ukraine by placing more than 100,000 battle-ready troops on the border, the Kremlin has sought to define the crisis by articulating its grievances.

Given the open-ended nature of the crisis, these points of tension, on both the Kremlin’s and the West’s sides, could change again. For now, a couple of issues are up for debate.

So, what are they? 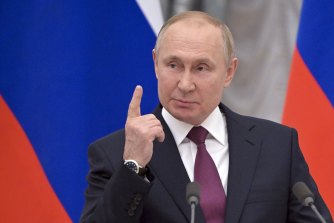 Russian President Vladimir Putin gestures as he speaks during a joint news conference with German Chancellor Olaf Scholz in Moscow.Credit:Kremlin/AP

What does NATO membership have to do with it?

The vexed issue of NATO membership for Ukraine is at the source of conflicting signals from Ukraine, Russia, Europe and the United States. It’s vexed in part because, from certain angles, it’s a non-issue. As a sovereign nation, Ukraine has the right to join the trans-Atlantic defence pact – NATO, or the North Atlantic Treaty Organisation – that was created to protect Western Europe from Russia during the Cold War.

At the same time, it’s no secret that this move would anger Russia, which has watched helplessly as most of its neighbours clamoured to join NATO after the end of the Cold War. Remember, the Moscow-led Cold War Warsaw Pact was one of the alliances that, essentially, invaded itself. Twice. That was in Hungary in 1956, when the Soviets put down the Hungarian Revolution, and Czechoslovakia in 1968, during the Prague Spring.

While the US and NATO support Ukraine’s sovereign right to join, they haven’t asked it to join.

In recent months, however, Putin has zeroed in on the fear of possible Ukrainian membership of NATO. It’s for this reason that Western observers note that the talk about Ukraine joining NATO is driven by Russia.

But this is part of the broader issue with the current Ukraine crisis; it has been sparked by Russia placing troops at Ukraine’s border and now Russia seeks to resolve the tensions it has created through concessions from Ukraine, NATO, the EU, US or the West in general.

Importantly for Ukraine, any talks at which the country isn’t present sends a worrying signal about the nation’s genuine independence and sovereignty. Likewise, US-Russia or US-NATO discussion that Ukraine is not consulted on is seen as a tacit victory for Putin, as it reasserts the idea that the country, a former part of the Soviet Union, is really a territory under a zone of influence.

“We are not seeking direct confrontation with Russia,” US President Joe Biden said, but the US will send arms and assistance, and will use diplomacy, sanctions and other measures. Just no US troops in Ukraine.

Putin, however, isn’t reassured that the West won’t allow Ukraine to join NATO.

When German Chancellor Olaf Scholz told Putin that NATO’s eastward expansion “is not on the agenda – everyone knows that very well”, Putin asked, “They are telling us it won’t happen tomorrow. Well, when will it happen? The day after tomorrow? What does it change for us in the historic perspective? Nothing.”

What are the Minsk accords and why do they matter?

It was French President Emmanuel Macron who recently signalled the possibility of using the Minsk accords to reach a compromise between Russia and Ukraine. The agreements, signed in the Belarus capital of Minsk in 2014 and 2015, were designed to end the war in eastern Ukraine, which has been fought between Russian-backed separatists (Russia denies involvement) and Ukrainian forces since 2014.

The two sets of agreements were worked out between Russia, Ukraine and the Organisation for Security and Cooperation in Europe, as well as the leaders of the two pro-Russian separatist regions – the people’s republics of Donetsk and of Luhansk. Leaders of France, Germany, Russia and Ukraine signed a separate declaration of support for the deal.

The deal was negotiated at a time when Ukraine had a particularly weak hand: Russia had just seized Crimea, sending in troops and calling a referendum on the political status of the peninsula.

The Minsk agreements set out a series of military and political steps but they have never been implemented. Since 2014, nearly 15,000 people have died in the conflict. Australians will recall that a Russia-made Buk missile shot down Malaysia Airline flight MH17 on July 17, 2014, killing 298 people, including 29 Australian citizens and residents. Dutch investigators believe it came from Russia’s 53rd anti-aircraft missile brigade, which is based in the Russian city of Kursk. In other words, the missile was fired from territory controlled by Moscow-backed separatists inside Ukraine.

The Kremlin asserts that the Minsk accords contain a pledge that Ukraine won’t join NATO. But Kyiv and Washington – and NATO – reject that. One difficult clause of the Minsk deal stipulates that Ukraine will write a “neutrality clause” into its constitution that “would rule out NATO accession”.

Another major blockage in implementing the Minsk agreements has been Russia’s insistence that it is not a party to the ongoing separatist conflict and therefore is not bound by the deal’s terms. Yet Moscow’s ongoing role in eastern Ukraine has prompted the White House to warn Russia not to “further invade” Ukraine because Russian arms, equipment, personnel and diplomatic support have been on the ground since 2014.

And what’s the relevance of the Nord Stream 2 pipeline?

Nord Stream 2 is the 1230-kilometre-long natural gas pipeline under the Baltic Sea, running from Russia to Germany’s Baltic coast. Owned by Kremlin-aligned Gazprom, the completed project would double the capacity of an earlier Nord Stream pipeline to 110 billion cubic metres of gas a year.

Most analysts believe the project would increase Russia’s leverage over Europe. The pipeline has been filled with gas but is not operating yet pending approval by the European Commission and utility regulators in energy-hungry Germany.

And this is where it gets complicated.

Biden has waived the threat of sanctions on the project because the US doesn’t want to deny Germany its needed gas. But should Russia attack Ukraine, the US could impose heavy financial sanctions – penalising anyone or any company that does business with Russia over the pipeline.

Yet Germany’s new business-minded Chancellor will not say whether Germany would, on its own, reject the project if Russia invades Ukraine.

So while Nord Stream 2 has emerged as a bargaining chip, it’s far from clear who will ultimately have the upper hand: Russia, if the pipeline opens despite its invasion-threats; the US, if it forces Russia to back down on Ukraine; or Germany, in some scenario where Russia tensions continue but the US no longer objects to the Nord Stream 2.

How does cyberspace play into it?

Russia-state-aligned cyber attacks and use of disinformation pose a threat to the economic and political well-being of democracies. It’s expected that any invasion of Ukraine will be matched by a cyber offensive, which could be widespread and aimed for maximum damage, not just of Ukraine but the US and its allies.

Given the murky nature of cyber combat, it may already be happening.

Although Russia has been behind a string of cyber attacks (and, presumably, the National Security Agency has hacked Russian targets back), the growth of ransomware gangs operating under the protection of the Kremlin has begun to pose a genuine economic challenge to companies in Western nations. (The hack of meat processor JBS in Australia in May was linked to a Russian ransomware operator, for example.)

For this reason, Biden warned in his speech on Wednesday, “If Russia attacks the United States or allies through asymmetric means, like disruptive cyber attacks against our companies or critical infrastructure, we are prepared to respond.”

Biden’s pledge to defend companies in this instance is noteworthy because of how blurry the borders of responsibility are for cyber-defence. Unlike jurisdictions in the physical world, defending the companies on the internet is much more layered and diverse.

Biden appeared to be drawing a line in the sand on the issue, in the process elevating its priority in the ongoing tensions over the Ukraine crisis.