The View will have some familiar faces for its 25th season.

ET confirms that Meredith Vieira, Elisabeth Hasselbeck and Star Jones will return to the daytime talk show to guest co-host the show next month. The three ladies will make their appearances on separate dates throughout the month of February to celebrate season 25 of the The View.

ET has also learned that all past co-hosts of The View over the last 25 years have been or will be invited back this season.

Jones, 59, is set to co-host The View's Friday, Feb. 4 show, per People who was first to report the news. Vieira, 68, and Hasselbeck's dates have yet to be announced at this time.

Jones and Vieira were original co-hosts, alongside creator Barbara Walters, Joy Behar and Debbie Matenopoulos, when The View premiered in 1997. They both left the show during season 9 in 2006. Hasselbeck, 44, on her end, was a co-host from 2003 to 2013.

After the news broke, Hasselbeck — who made a guest appearance in March 2020 — took to her Instagram Story to share her thoughts on her return.

"Will it be an honor? Yes. Will there be a curve ball? Likely. Why? I have some things to say and share. Will I finish a complete sentence or thought? likely not," she wrote, adding a winking face emoji.

During Hasselbeck's 2020 appearance, she sparred with Behar and Sunny Hostin about former President Donald Trump's leadership amid the pandemic and said people should pray that the coronavirus goes away. 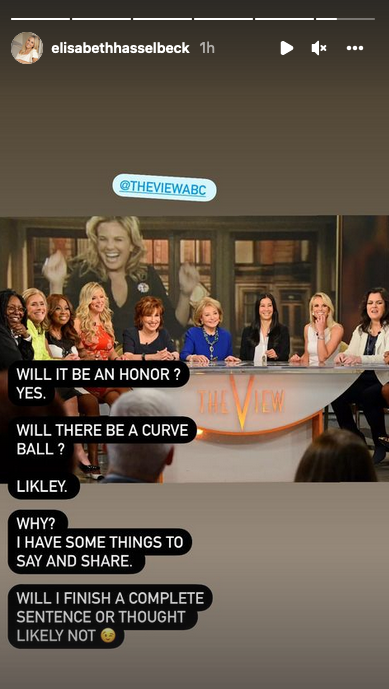 Meanwhile, this week, former co-host Lisa Ling, who had a spot at the table from 1999 to 2002, was the first guest host.

Eboni K. Williams Wants to Be Full-Time on 'The View' and 'RHONY'