Chinese government-controlled media has threatened Australia with further trade strikes after former prime minister Tony Abbott accused Beijing of bullying Taiwan and claimed China could “lash out disastrously” if it was not stopped.

China Daily, which is managed by China’s State Council Information Office and is seen as a forward indicator of Chinese government international positioning, said in an editorial that Abbott’s visit to Taiwan last week was a provocation that had smeared the mainland and risked “dragging Australia deeper into the mess of its own making”. 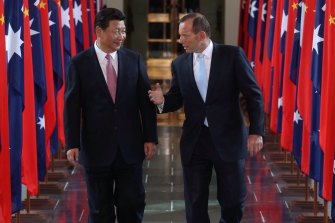 “Australia, a country that relies heavily on trade with China, has persistently prodded the most sensitive nerve of its biggest trading partner,” the state media outlet wrote.

“With politicians in Canberra continuing to act and sound increasingly hostile toward China, the worst is probably yet to come.”

China launched trade strikes on $20 billion worth of exports last year across the wine, beef, barley, seafood, timber and coal sectors. Australian exports have largely held up in nominal terms by diverting products to other markets, but individual exporters – particularly in the seafood and wine sectors – have borne the brunt of the tariffs and border measures.

China, the world’s second-largest economy, is running out of Australian exports left to strike that would not harm its own economy. Last week it started accepting some shipments of Australian coal because it is running low on fuel to power its economy.

It has also left iron ore, now worth $13 billion a month, untouched as it looks to steel its post-coronavirus economy through infrastructure and construction. However, Australia’s $4 billion-a-year Chinese international student market remains vulnerable as education agents report students wanting to finish their Australian degrees but few new ones signing up.

Abbott, who visited Taiwan last week in a private capacity but said he would talk to the Australian government upon his return, accused Beijing of weaponising trade. “Its embassy has published 14 demands – essentially that we become a tributary state – that no self-respecting country could accept,” he said.

Abbott hosted Xi Jinping in Canberra when he was prime minister in 2014 as part of negotiations over a China-Australia free trade deal, but labelled the Chinese President “a new red emperor” in his speech on Friday.

The relationship between Australia and China deteriorated sharply before the coronavirus pandemic after almost a year of disputes over investment deals, national security measures and human rights concerns in Hong Kong and Xinjiang. The Morrison government’s call for an inquiry into the origins of COVID-19 deepened a diplomatic freeze that has seen all ministerial contact cut off for more than 18 months.

The Australian government has been cautious in its approach to democratic Taiwan, which China regards as one of its provinces, lest it further inflame the relationship. Abbott’s visit last week, which included meetings with Taiwan’s President Tsai Ing-wen, was the highest-profile by a former Australian leader in more than five decades. It came after Beijing threatened the island of 24 million by sending more than 100 warplanes towards its airspace over the course of a week.

“Canberra should bear in mind that it is cutting off its nose to spite its face, as meddling in the Taiwan question is a dead end,” said China Daily. “Beijing has both the determination and capability to shore up the irreversible trend of national reunification.”

China Daily, which is seen as more moderate than the nationalistic Global Times, accused the US, Australia and their allies of “posing a real threat to regional peace and stability”.

“By sending warships to sail through the Straits and selling colossal amounts of arms to the Chinese island, the US itself is the one banging the so-called drums of war,” it said.

But it also made clear that Beijing’s central concern was not the status-quo, where Taiwan operates separately while not being recognised as formally independent internationally, but what it frames as the threat of separatists who want official independence.

“The message is obvious: Rather than counting on support from the US and its allies, the Taiwan separatists will have to fend for themselves,” said China Daily.

“Hence, Abbott’s speech should, in fact, serve as a wake-up call for those in Taiwan who still indulge in the daydream that colluding with outside forces will enable them to split Taiwan from the motherland.”

Taiwan’s government has not laid out any plans for a formal separation and has maintained a policy of ambiguity over its international status to keep the peace.

China has vowed to unify with Taiwan by 2049, a century after it separated from the mainland. The consensus among military analysts is that the probability of war will not increase significantly until the 2030s when China’s military capability matches that of the United States.