The father of Rust armorer Hannah Gutierrez Reed says she was fully trained and not at fault for the fatal shooting death of cinematographer Halyna Hutchins on the Bonanza Creek Ranch set.

Thell Reed, a weapons expert and veteran Hollywood armorer himself, gave his first interview to ABC News on Tuesday to defend his daughter. He said the 24-year-old has "been raised around gun safety since she was a little girl" and he is not concerned she will go to jail.

"She didn't need more training," Thell, 78, said of Hannah's résumé, despite the fact that she only served as lead armorer on one other film. "She's got me."

Thell —who was armorer on films including Tombstone and 3:10 to Yuma, and coached actors, including Russell Crowe, on weapon handling — said Hannah accompanied him to sets since she was a child.

"She's been raised around gun safety since she was a little girl," he said. "She liked film [and] thought about [doing] camera [operation], but she started working with me as an armorer and she liked that better."

Thell said Hannah was overtaxed having two jobs for the indie film, acting as assistant props person in addition to armorer.

"I didn't like it — and she complained about it too," he said of Hannah juggling jobs on Rust. 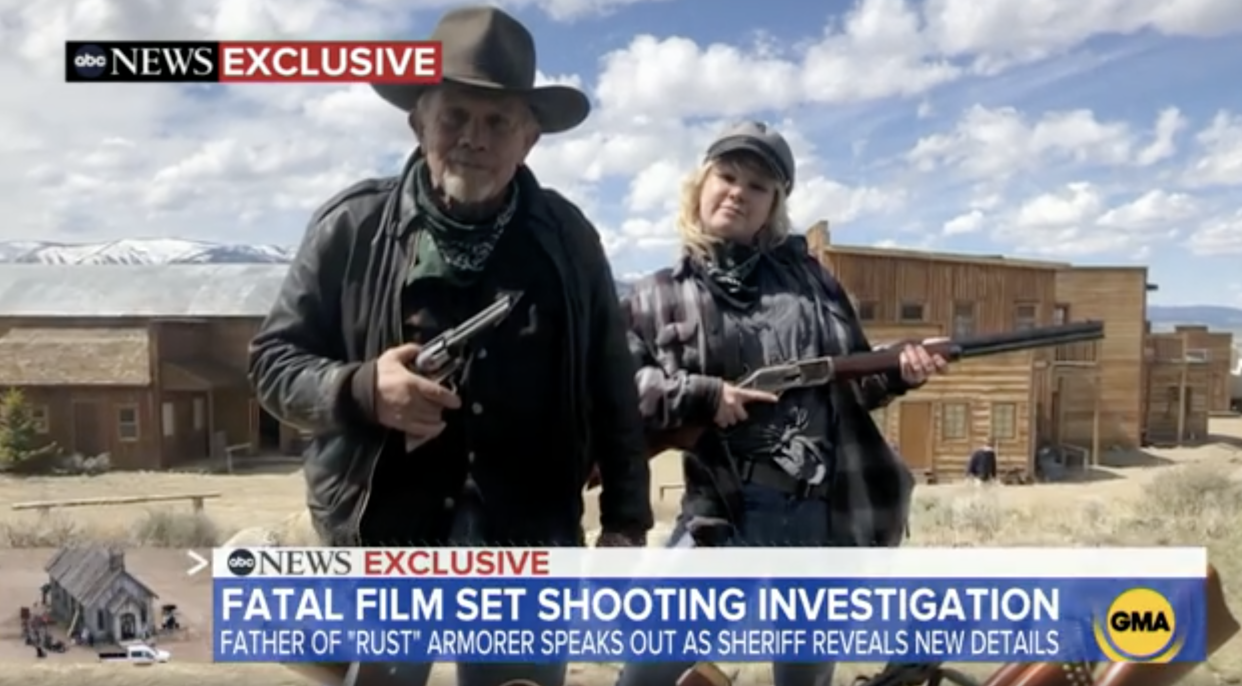 For the rehearsal during which the fatal shooting took place, Hannah wasn't present, having been called away for her other job. While she handed the gun to Alec Baldwin on every other occasion during production, this time, assistant director Dave Halls was the one who gave it to Baldwin, declaring it a "cold gun," or safe to use. Hall has since told investigators that he should have checked the gun more thoroughly as we now know there was live ammunition in it — not a dummy or a blank. Baldwin said in his interview last week that Hutchins instructed him on where to point the antique gun to get the best shot, and he cocked it but never pulled the trigger. When he let go of the hammer, he said it went off.

"They should have had [Hannah] on set to recheck that gun," Thell said. "If there was a live round placed in there, she would have found it."

He insisted Hannah would have "absolutely" rechecked it and prevented the fatality, saying, "She knows what to do."

Thell insisted Hannah's skills are as good as his own.

As for how the live ammo got to the set, Hannah's attorney maintained it was "sabotage," previously blaming union workers who walked off the movie set. (A crew member has called the allegation "incredibly irresponsible.")

Thell agreed to the theory, saying there was "a lot of motive there" for sabotage. As for whether Thell is worried Hannah could face jail time for the death of Hutchins and shooting of director Joel Souza, the senior Reed said, "No. The sheriff's department will get to the bottom of this. I'm not worried at all."

Thell didn't speak to how the live ammo got on the set. A search warrant contained a statement Thell gave investigators with his theory, leading authorities to collect evidence at PDQ Arm & Prop in Albuquerque, N.M., last week. However, the store owner, Seth Kenney, said he wasn't the only weapons provider for Rust and was certain his business didn't send those live rounds to the Rust set — even accidentally.

"We have not ruled out anyone in this case," he said, "and I don't believe the district attorney has either."

Potential criminal charges aside, two lawsuits have been filed so far in the shooting. Rust gaffer Serge Svetnoy named Gutierrez Reed one of the defendants in his lawsuit, and has said she was too inexperienced for the job.