For one, Meghan and Harry aren't in it.

Over the weekend, Buckingham Palace shared a brand-new portrait of the royal family. And while everyone is all smiles in the new snapshot (as awkward as it is), the fact that Prince Harry and Meghan Markle aren't included in the new photograph is ruffling feathers for royal fans. What's more, Harry and Meghan were actually in town when the shot was taken and royal experts note that they very well could have been in on the family fun if it wasn't for technicalities.

The portrait was taken at Buckingham Palace just one night before Queen Elizabeth II’s funeral at an event that welcomed visiting dignitaries and heads of state. According to sources at The Telegraph, Meghan and Harry were initially invited to the reception, but later "uninvited" and informed that it was for "working members of the royal family only."

Royal expert Richard Kay added in an article for the Daily Mail that "the unspoken elephant in the room is the absence of the king's younger son" and speculates that the photo may "deepen feelings of exclusion and exile." 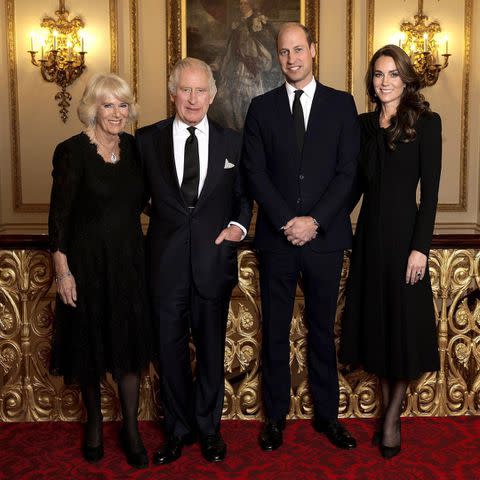 Kay adds, "There is a finality about this photo that suggests there is no way back for a couple who could have been at the epicenter of royalty, but are now at its margins."

Cosmopolitan notes that neither Harry nor Meghan have commented on the photo and their exclusion from it, though there's probably not a possibility that it'll come up in their Netflix documentary or Harry's memoir, as past reports make it seem like the Duke of Sussex is trying to tiptoe around royal drama as much as he can.