Theresa May was today accused of ‘concealing the facts’ by refusing to publish the full legal advice on her Brexit deal.

The Prime Minister finally caved to the demand and released the secret documents today after MPs voted to find the Government in contempt of Parliament last night.

It was the first time in modern history MPs have passed such a vote and dealt the PM’s authority a humiliating blow.

The advice, published today, revealed that Attorney General Geoffrey Cox warned Britain could be stuck in the Irish backstop forever if trade talks with the EU break down.

The SNP’s Ian Blackford rounded on the PM in the Commons, furiously accusing her misleading MPs over her Brexit deal.

He lashed her Government – saying it is one that ‘has suffered three consecutive defeats in just two hours – the first Government to do so in 40 years, and now a Government found to be in contempt of Parliament.

‘Isn’t it time that the Prime Minister take responsibility for concealing the facts of her Brexit deal?’ 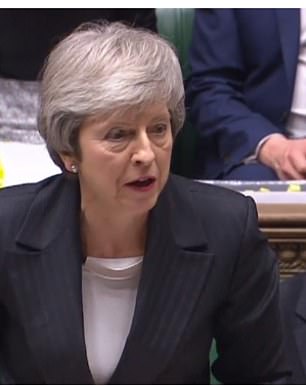 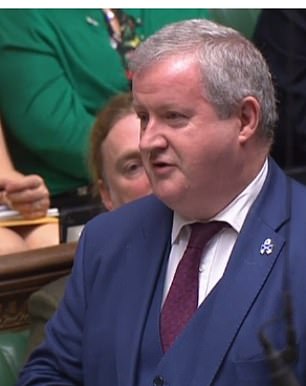 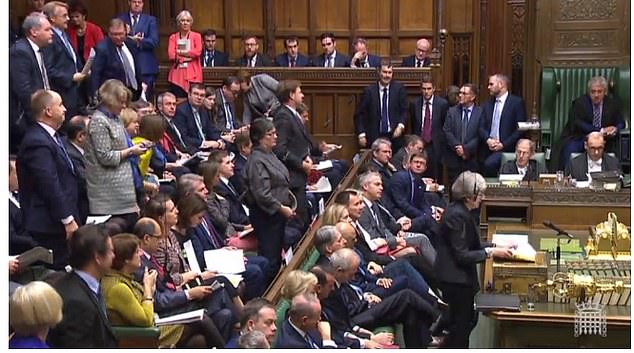 Mrs May hit back saying: ‘You are wrong – this government has not concealed the facts on the Brexit deal.’

But Mr Blackford hit back, saying: That is a disappointing response from the PM. The facts had to be dragged out of the Government by this Parliament.’

63 minutes of mayhem: how May was defeated three times in an hour

Theresa May suffered the worst day of any Prime Minister in 40 years in the Commons yesterday as MPs inflicted three defeats on her in barely more than an hour.

This is how it unfolded:

4.41pm: The first vote is announced on the Government’s amendment to the contempt motion, attempting to kick it into the long grass. Government loses 311 to 307.

4.58pm: The main Labour motion declaring the Government to be in contempt of Parliament is announced. Government loses 311 to 293.

5.44pm: Dominic Grieve’s amendment on what happens after the deal is rejected is announced. Government loses 321 to 299.

5.48pm: Theresa May stands up to make the case for her deal at the Despatch Box.

He added: ‘The Prime Mister has been misleading the House – inadvertently or otherwise.’

But his remarks sparked a furious ticking off by Commons Speaker John Bercow who said the SNP politician cannot accuse the PM of purposely lying to MPs.

While the SNP leader swooped in on the Brexit disarray tearing her party and government apart, Jeremy Corbyn did not mention the UK’s looming departure or last night’s embarrassing Commons defeats once in his questions.

The parliamentary clash came after ministers bowed to pressure and published the full legal advice they were given by Mr Cox.

He warned that Britain could be stuck in the Irish backstop forever if trade talks with the EU break down.

The document, drawn up by Mr Cox for senior ministers, said the measure is ‘intended to subsist even when negotiations have broken down’.

He told the Cabinet that ‘despite statements in the Protocol it is not intended to be permanent and the clear intention of the parties that it should be replaced by alternative, permanent arrangements, in international law the protocol would endure indefinitely until a superseding agreement took its place.’

Mr Cox said it was impossible for Britain to escape the backstop unilaterally and it was a political deal with Brussels was the only way out.

Earlier, MPs were warned they would live to ‘regret’ forcing the Government to publish the document.

Tory rebels joined forces with Labour to consign Mrs May to three humbling defeats in 63 minutes of chaos last night – the worst hour in Parliament for any Prime Minister in 40 years. 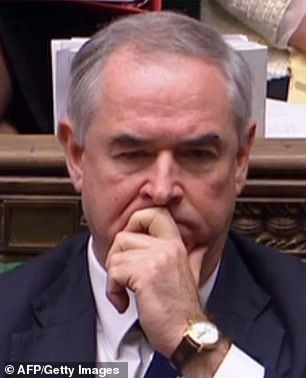 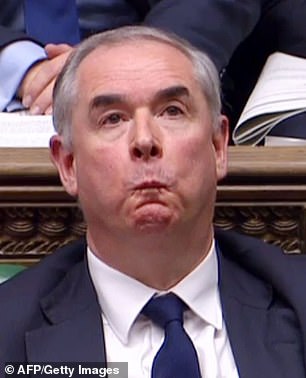 Both Leave and Remain MPs wanted the advice amid suspicion Attorney General Geoffrey Cox gave a bleaker assessment of how the deal works privately to Cabinet than he revealed publicly on Monday.

Mrs Leadsom said ministers would now follow the orders of Parliament but said it undermined ‘decades if not centuries of convention’ where ministers received advice from the law officers in secret.

She said: ‘I think any parliamentarian who wants at some point in the future to be in Government is going to live to regret their vote last night.’