Prime Minister Theresa May has delayed the next ‘meaningful vote’ on Brexit by two weeks and said that it will be held by March 12.

The PM made the announcement as she landed in Sharm el Sheikh, Egypt, for an EU conference with the Arab League starting today.

It is thought that the choice of date could increase her chances of getting her deal through Parliament because a vote to delay Brexit is also scheduled for March 12.

Hardline Brexiteers led by Jacob Rees-Mogg would have to decide whether to shoot down the plan in the knowledge that – were they to vote against the PM and defeat the government – the very next vote on the ballot paper might lead to Brexit being postponed.

Mrs May also resisted calls to sack three Cabinet members who openly argued in the Daily Mail – in defiance of the government’s position – that Article 50 should be extended and the UK’s EU departure date delayed.

She insisted Cabinet collective responsibility had not broken down after pro-EU ministers Amber Rubb, David Gauke and Greg Clark signalled they could support backbench moves to delay withdrawal in order to prevent a no-deal Brexit. 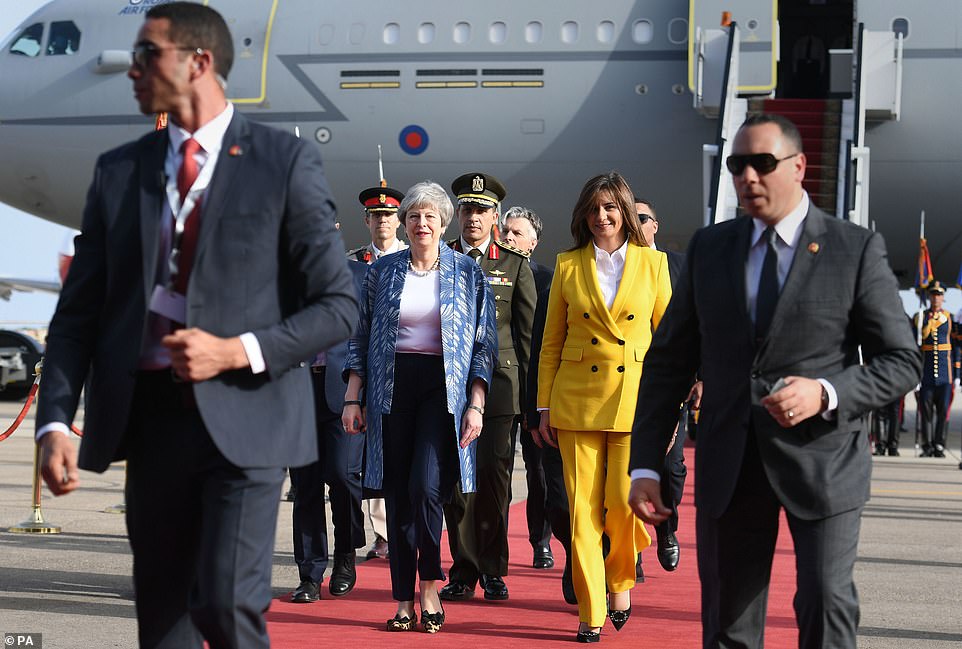 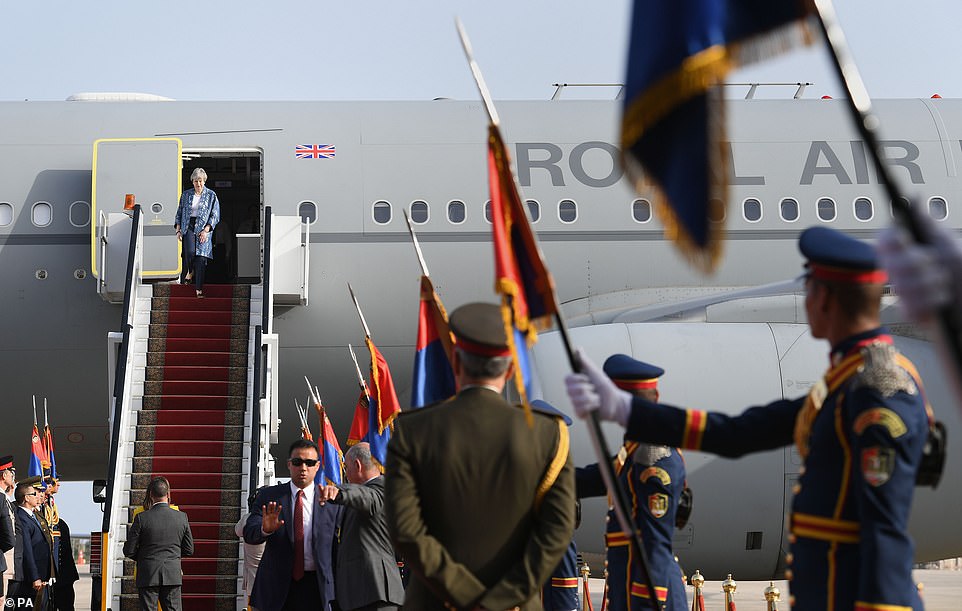 Mrs May getting off the plane in Sharm el Sheikh, Egypt, in advance of a conference with the Arab League starting today

The PM said that because ‘positive’ talks were ongoing with the EU, a meaningful vote would not be held this week.

But the delay could also be seen as a tactical move to increase the Prime Minister’s chances of passing her deal.

Should the two votes take place on the same day which now looks likely, MPs would be voting on the Prime Minister’s deal in the knowledge that a ‘no’ vote could be followed by a vote instructing Mrs May to return to Brussels and ask for more time.

That might apply pressure on the ERG-group of hardline Brexiteers to support her plan despite their serious misgivings, for fear of seeing their Brexit dream delayed or taken from them at the final moment.

The March 12 deadline also leaves open the possibility that the Chancellor’s Spring Statement, scheduled for the following day, could be converted into an emergency budget to prepare the country for No Deal in the event of a defeat for the government.

‘My team will be back in Brussels again this coming week. They will be returning to Brussels on Tuesday.

‘As a result of that we won’t bring a meaningful vote to Parliament this week. But we will ensure that that happens by March 12.

‘But it is still within our grasp to leave the European Union with a deal on March 29.’ 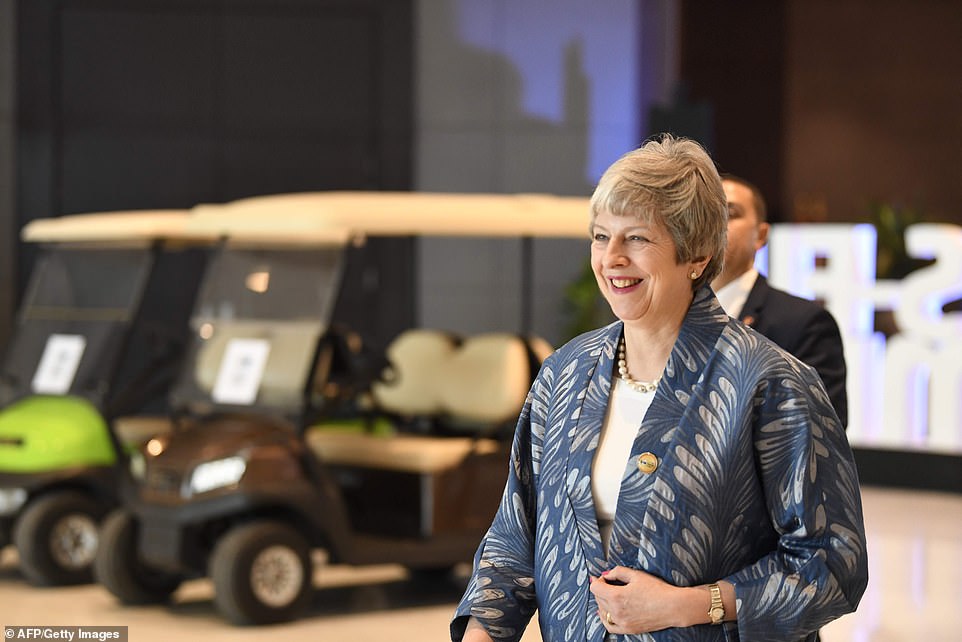 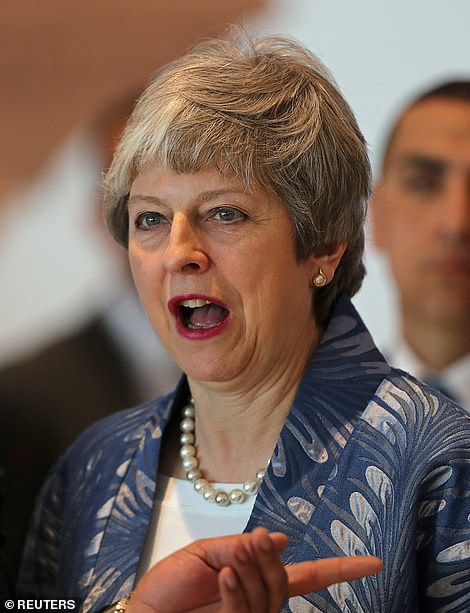 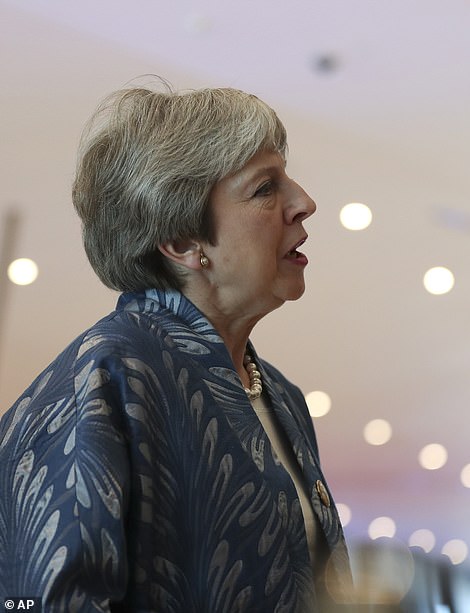 Mrs May said: ‘My team will be back in Brussels again this coming week. They will be returning to Brussels on Tuesday. ‘As a result of that we won’t bring a meaningful vote to Parliament this week’

“Theresa May is recklessly running down the clock in a desperate attempt to force MPs to choose between her deal and no deal. Parliament cannot stand by and allow this to happen.”

And Ms Cooper tweeted: ‘Still drifting. Still no progress. Nothing has changed. Getting ever closer to a chaotic No Deal. This is incredibly irresponsible when food prices, manufacturing jobs, medicine supplies & security are all at stake. Makes it even more important to support our Bill this week’

She added later: ‘Utterly shambolic and irresponsible. Each time she promises a new date. Each time she delays. Each time we get closer to cliff edge. How are businesses, public services & families supposed to plan in this chaos? Why shd anyone believe these pledges when she keeps ripping them up?’ 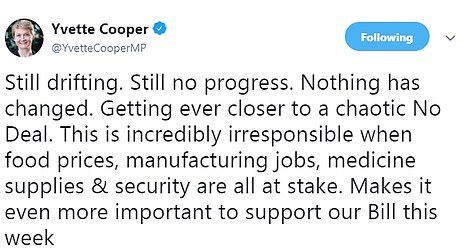 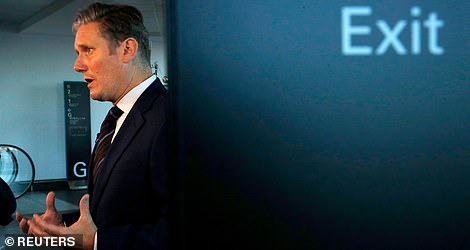 ‘You haven’t even seen what motion the Government is going to put down – as I say, it won’t be the meaningful vote.

‘I will be making a statement to Parliament on Tuesday. And then, obviously, we’ll be having the debate the next day.’

The PM said the Government was still in talks with the EU about the Northern Ireland backstop.

Mrs May said: ‘We are still in that negotiation. We are still talking to the EU about various ways in which we can find a resolution to the issue that Parliament raised.’

‘It is pointless, we should focus on what we are doing now, which is working to get a deal, and bring that deal to a meaningful vote – which I want to see passed by the House of Commons and leave on 29 March.’

The PM insisted collective Cabinet responsibility had not broken down after the intervention by Amber Rudd, Greg Clark and David Gauke.

‘No,’ she said, ‘collective responsibility has not broken down.

‘What we have seen around the Cabinet table, in the party, and in the country at large is strong views on the issue of Europe. That is not a surprise to anybody. 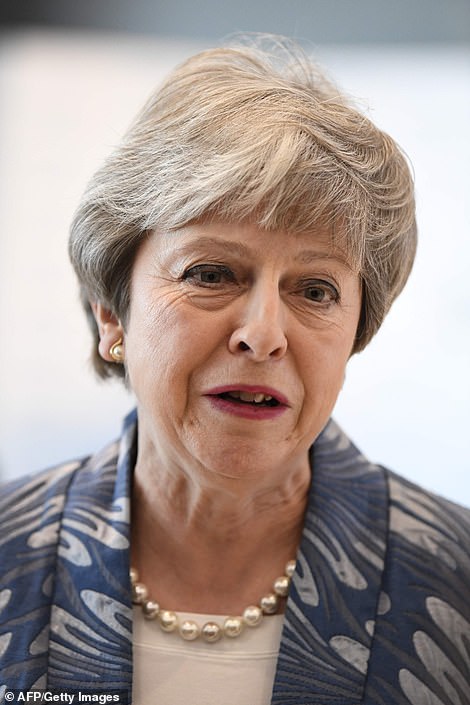 ‘We have around the Cabinet table a collective, not just responsibility, but desire, to actually ensure that we leave the European Union with a deal. That’s what we’re working for and that’s what I’m working for.’

Asked if the three ministers should remain in Government, Mrs May said: ‘What we see around the Cabinet table is strong views held on the issue of Europe.’

Mrs May said that extending Article 50 would not deal with the issues.

The PM said: ‘Now, often people talk about the extension of Article 50 as if that will actually solve the issue. Of course it won’t. It defers the point of decision. There comes a point where we need to make that decision.

‘There will always come a point where we have to decide whether we accept the deal that’s been negotiated or not.

‘And that will be a decision for every member of Parliament across the House.

‘Every member of the Commons will have to face that decision when that point comes.

‘The Government will be bringing back, working with the EU, and will want to put a deal to the House of Commons in a meaningful vote.’