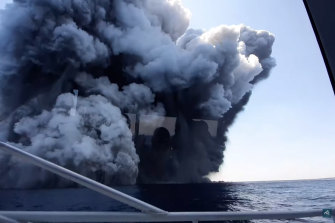 Ten parties face fines of $NZ1.5 million while three individuals are charged in relation to due diligence, facing maximum fines of $NZ300,000, it reported.

Worksafe is due to release its investigation into the volcanic eruption on Monday afternoon.

A media conference at 3pm, NZ time, is expected to include details of any prosecutions over the tragedy which made world headlines, and left some survivors still undergoing treatment almost a year later.

Forty-seven people were on the island 52 kilometres offshore from Whakātane when the crater exploded on December 9 last year, showering tourists and guides with rocks, clouds of ash and toxic gases. Fourteen Australians, five Americans, two New Zealanders and one German national.

Many survivors suffered horrific burns and Ngāti Awa-owned tour operator White Island Tours came under scrutiny for continuing to run guided trips, even though GNS Science had raised its volcanic warning to alert level 2 two weeks earlier and banned its staff from going near vents a week before the eruption.