Three adult cats refused to leave a small kitten stranded and helped it to make a five-foot jump on to a rooftop so it could be reunited with them.

The cats peered over the edge of the building in Naples, Italy, while the little feline, who was too small to make the jump, was stuck on the steps below, a video shows.

The footage, taken by a nearby resident identified only as Lucio, shows the touching moment that one of the cats leaps down to carry the helpless kitten to safety. 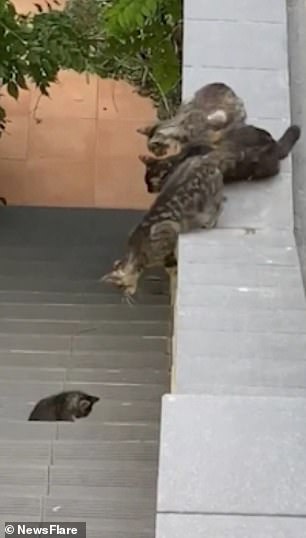 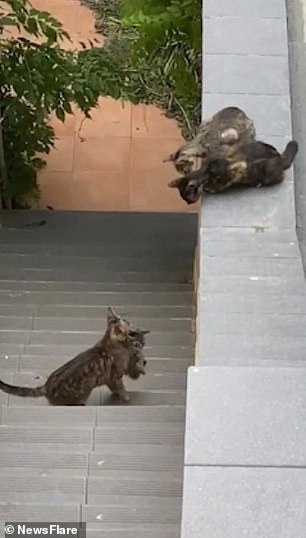 Three cats refused to leave a kitten stranded on a building’s steps in Naples, Italy, and helped the young feline make the five-foot jump to join them on the roof, footage shows

The older cat grabs the kitten between its teeth and attempts to make the jump, but the small feline slips from its mouth and tumbles down the hard steps.

But the cat refuses to leave the kitten behind, clambering back down to make the five-foot leap and carry its feline friend to safety.

On its second attempt, the cat manages to launch itself on top of the roof without dropping the kitten and reunites it with the other felines.

All three cats are seen crowding over the kitten sure it is not hurt before the four felines happily bound across the roof together. 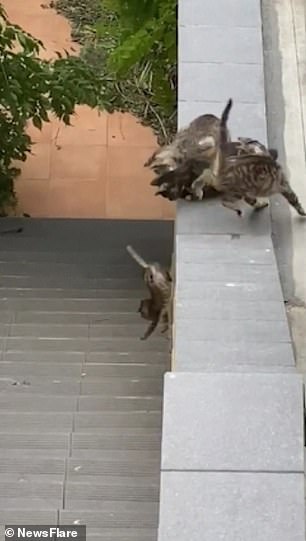 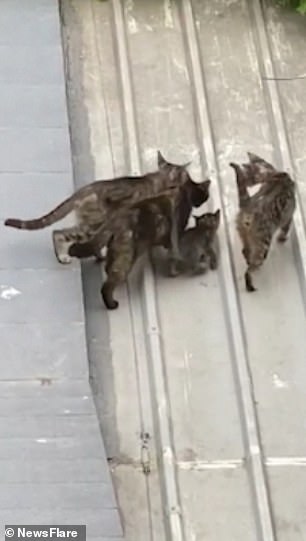 The cat tried to help the kitten to safety by jumping with it between its teeth, but the small feline fell off the roof (left). But after a second attempt, the four cats were reunited (right)

Lucio said: ‘I witnessed this scene this morning. The anxiety and suspense were very dramatic. I was willing them to succeed. It was like a National Geographic show.’

It is not known if the kitten had fallen from the roof or if the three cats had leapt up first and had to go back for their younger feline friend.

The heart-warming video footage was captured on May 14 this year.