‘Micro-penthouse’ the size of a garden shed overlooking Harrods sells for £325,000 – but you’ll have to sleep on the sofa!

One of Britain’s tiniest flats has sold for an eye-watering £325,000 – despite being the size of a garden shed.

The tenth-floor apartment in central London measures just 143sq ft, and is just a stone’s throw away from Harrods and Harvey Nichols in the exclusive borough of Knightsbridge.

The sale of the ‘micro-penthouse’ in Princes Court, on the Brompton Road, equates to £2,272 per sq ft – making it one of the priciest ever sales in London.

The apartment is described as ideal for ‘staff’ who may work for a super-rich family with a bigger apartment in the same building. 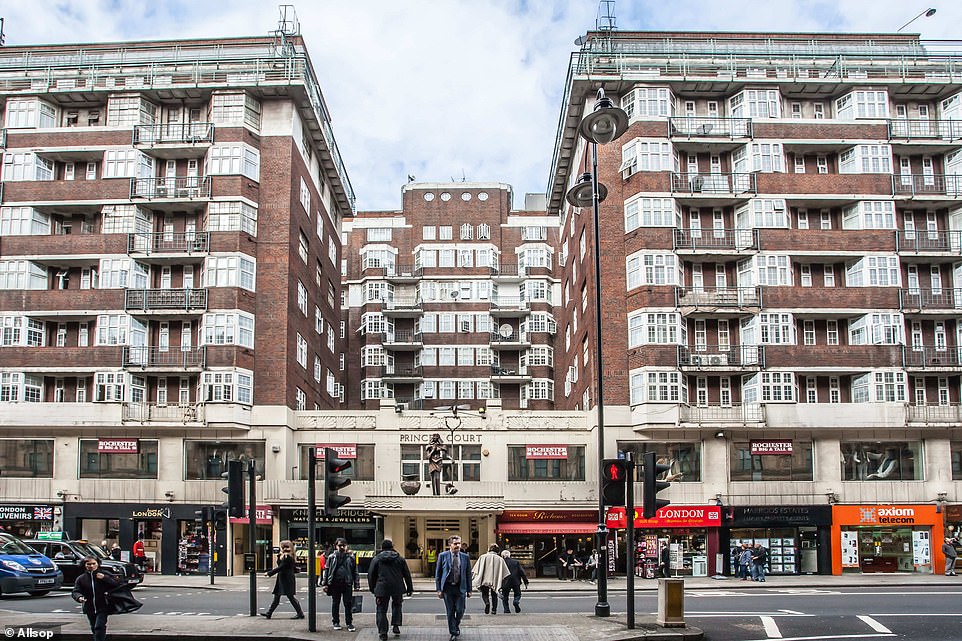 The tiny apartment is situated at Princes Court (pictured) in Knightsbridge, overlooking Harrods and Harvey Nichols 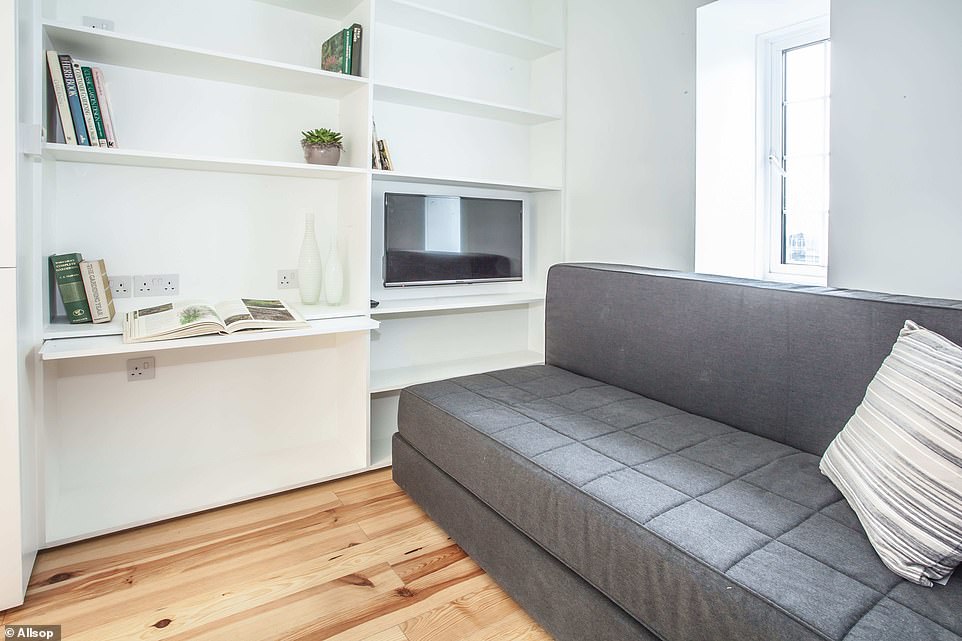 The living area consists of a grey sofa which can transform into a bed, shelves and an integrated TV, while a lengthy window lets in sunlight 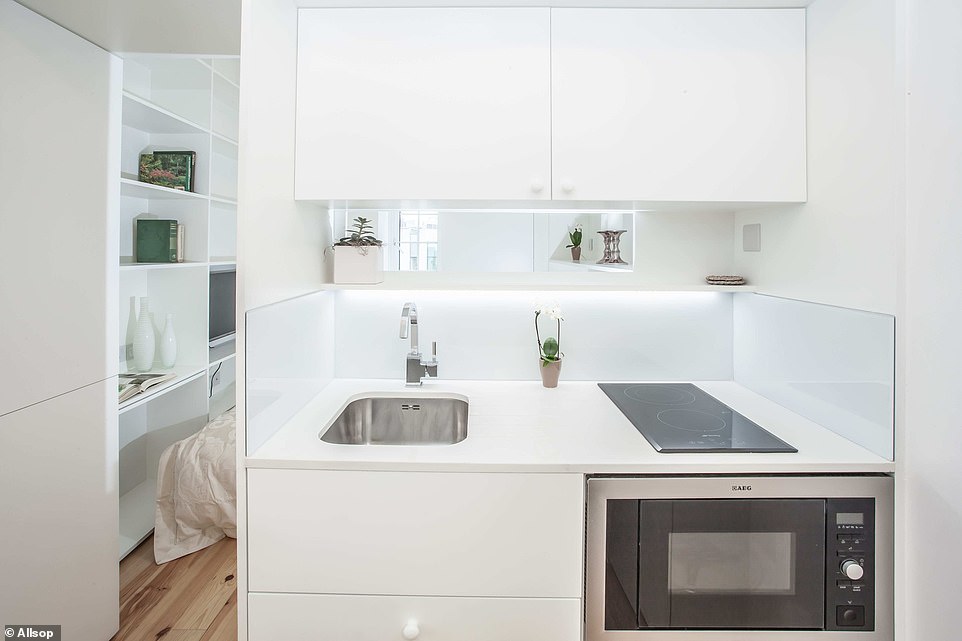 Next to the sofa/bed is a stylish kitchenette – which doubles as a room divider – featuring a hob, oven, sink and draws and overhead cupboards to store plates and bowls 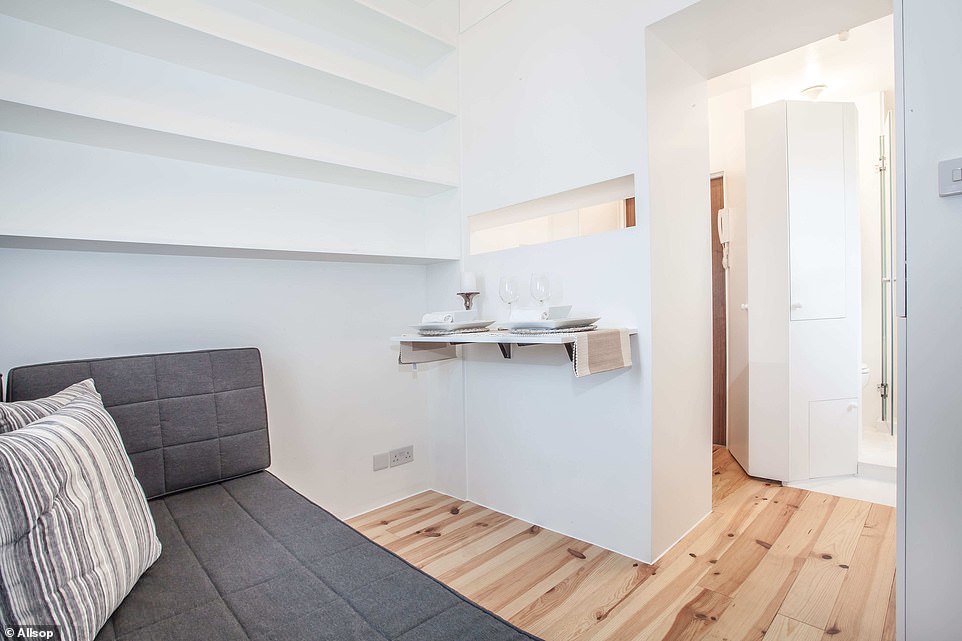 Directly opposite the bed, a shelf attached to the back of the kitchenette can be used as a dining table if stools are place underneath it 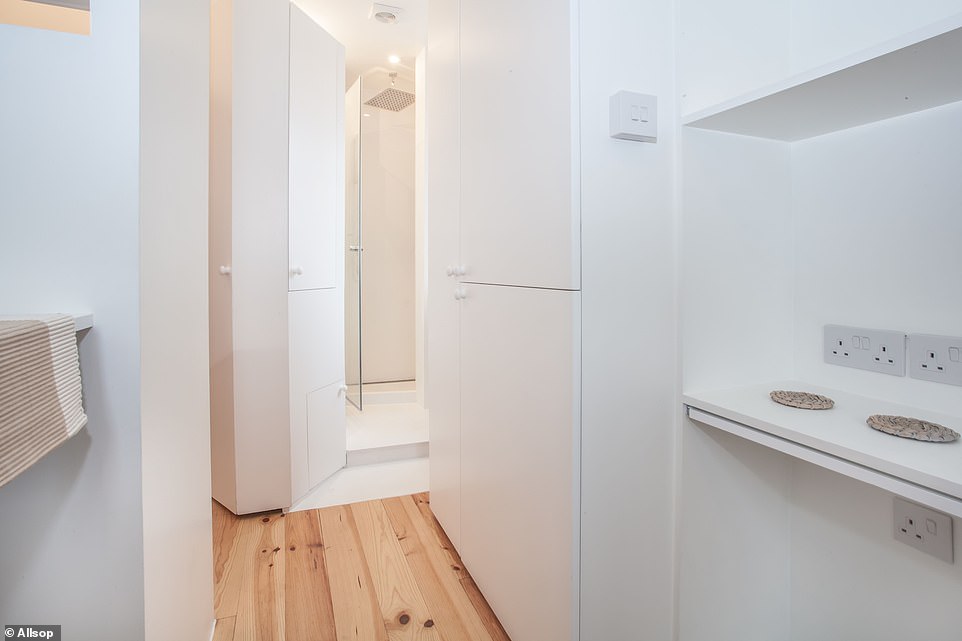 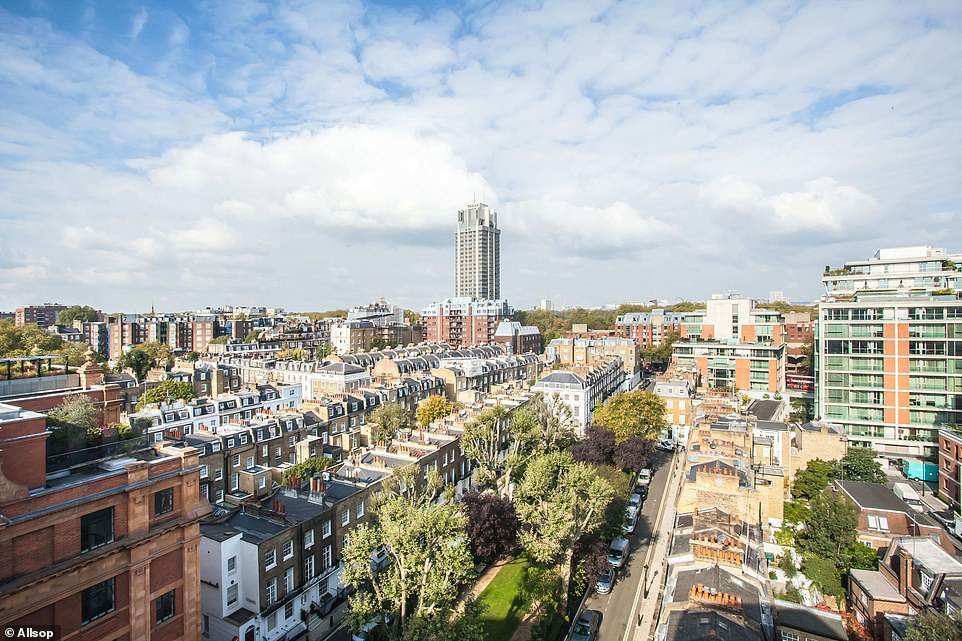 The property offers stunning views of Knightsbridge and had previously been listed for sale in January 2018 for £400,000 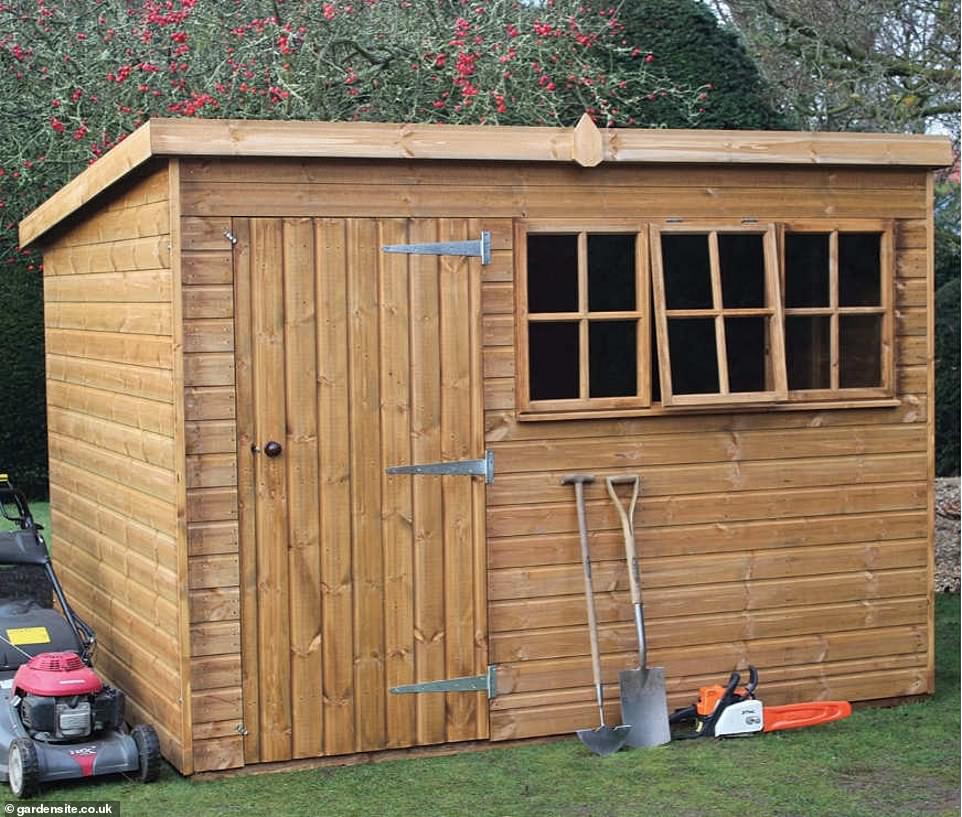 The home is no larger than a regular garden shed (pictured) 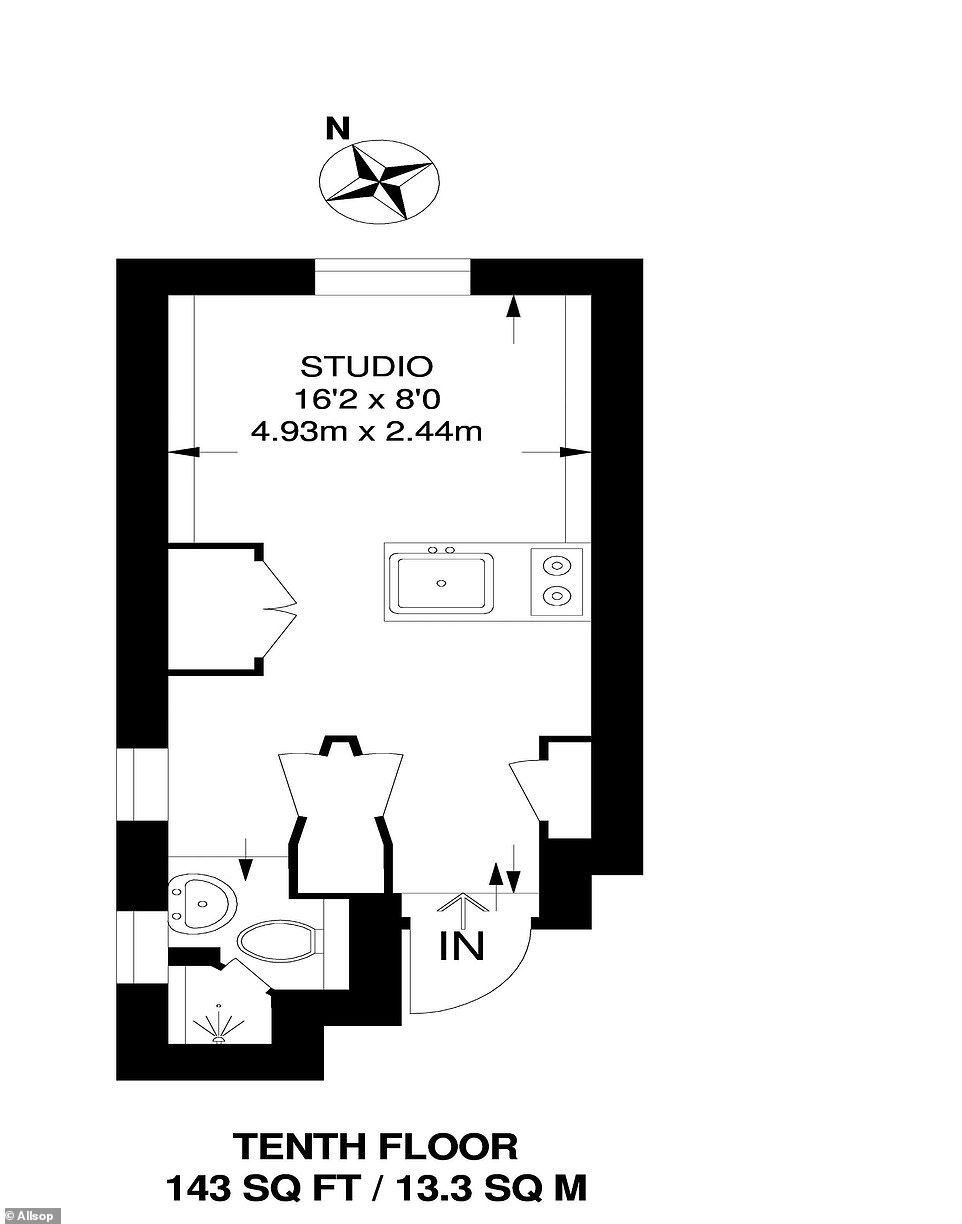 Floor plans show the tiny property, sold at auction by Allsop, manages to squeeze in all the living essentials

It is so small that a Caiano Morgado, a Portuguese firm of space-saving architects, was brought in by its previous owner to maximise the amount of liveable floor area.

The home now boasts a bed which transforms into a sofa, shelves with an integrated TV and a kitchenette complete with an oven, hob and sink built into a room divider.

Cupboards dotted along the hallway allow for maximum storage while the toilet boasts a sink and overhead shower.

A clever wooden divide can be pulled shut to conceal the loo from the main living space.

The owner or tenant will benefit from a 24-hour porter, but the home is subject to a short lease, with 120 years from 1977 – meaning it could be pricey to renew as just 76 years remain.

However the ground rent is just £225 a year – a steal for Knightsbridge. 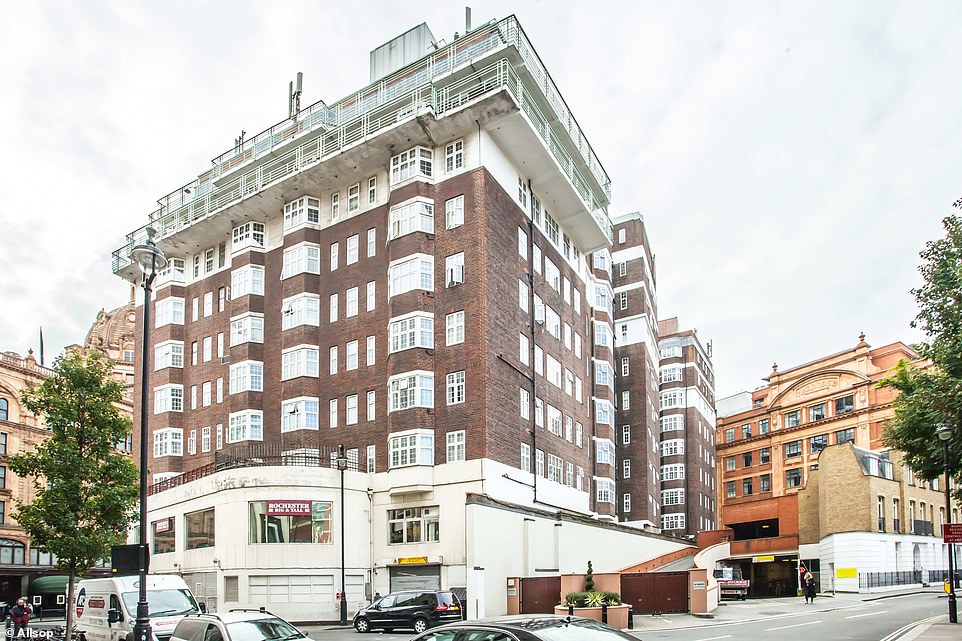 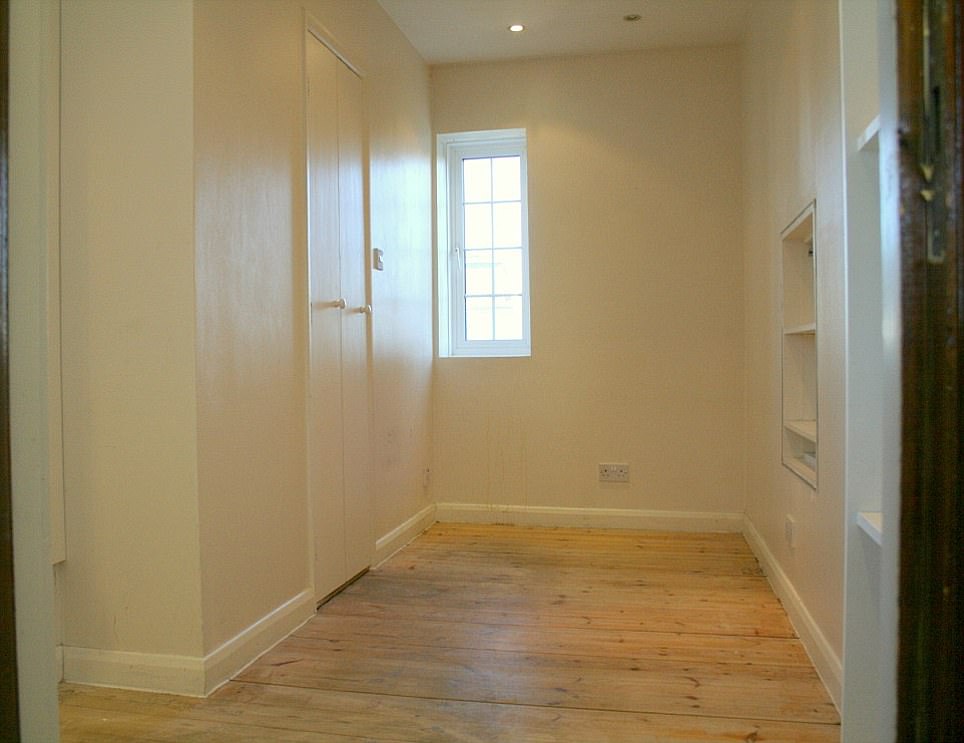 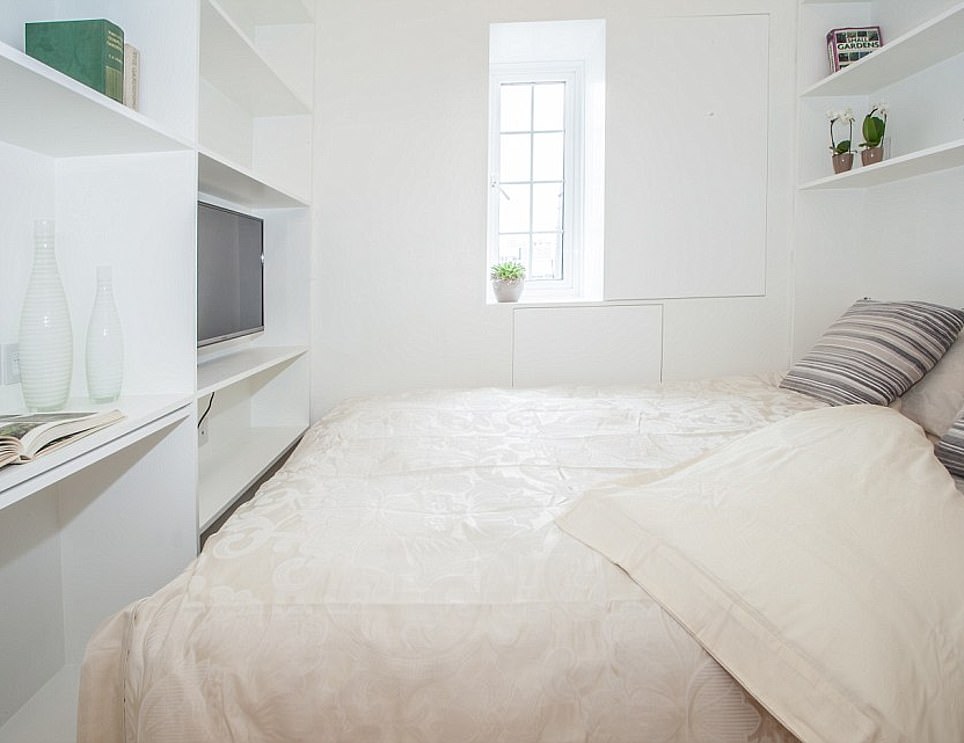 Caiano Morgado was roped in to transform the apartment. Pictured: Before and after of the bedroom/living space 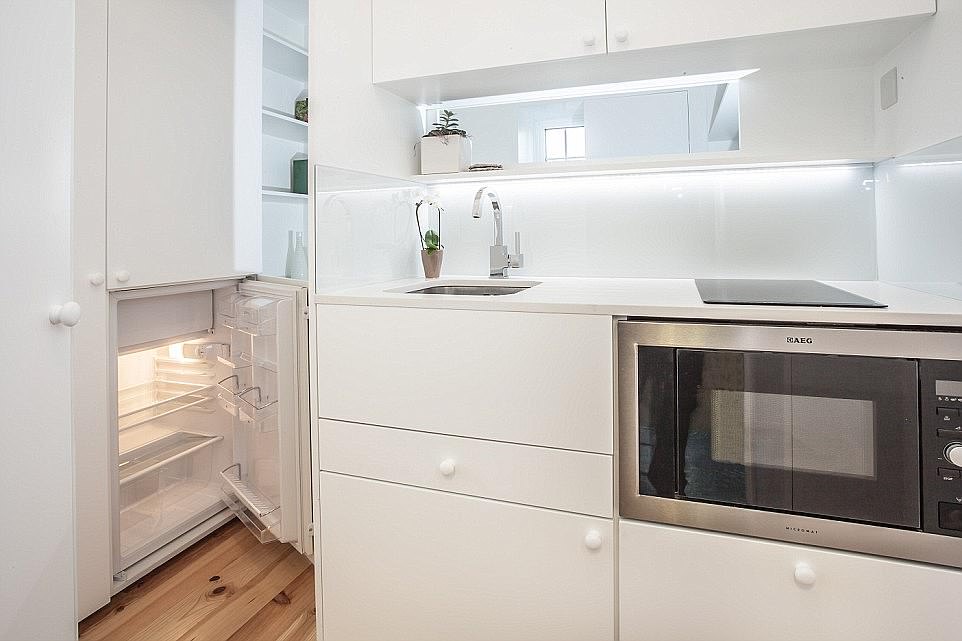 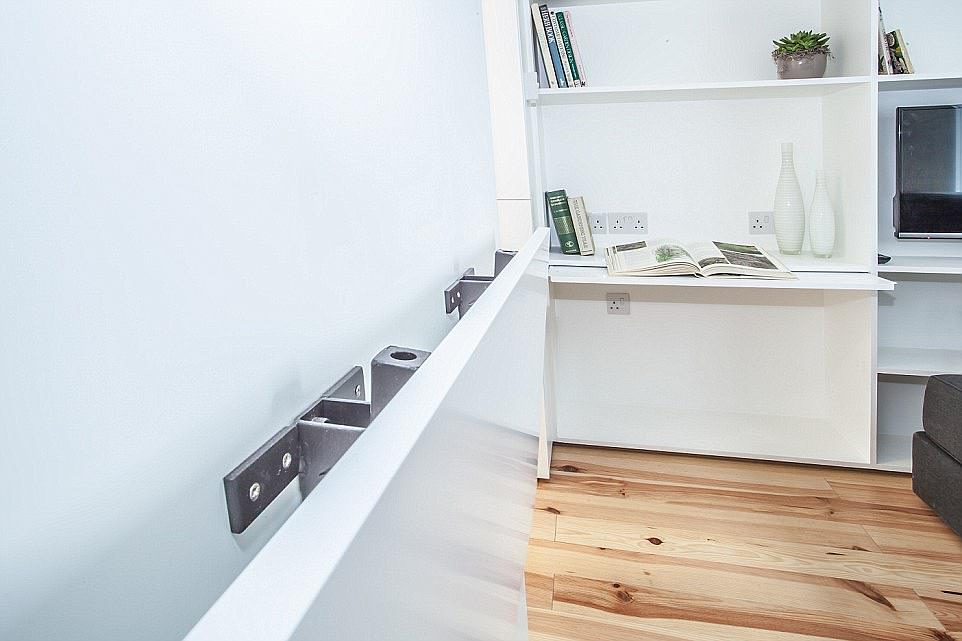 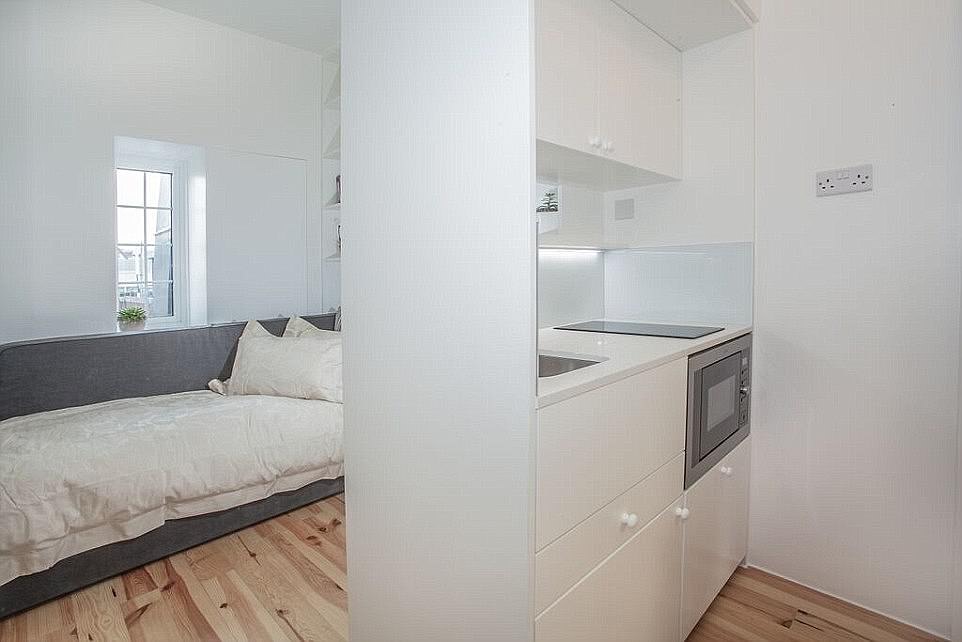 Nina Harrison, London Specialist at property advisors Haringtons, said the flat was one of the priciest she had seen per sq ft.

Nina Harrison, London Specialist at property advisors Haringtons, said the flat was one of the priciest she had seen per sq ft.

She added: ‘Tiny flats are few and far between in prime Central London, so there is often a premium.

‘A tiny flat would be ideal for a staff member who needs to be on call all the time for families that have a large apartment in the same building.

‘It would also be a very convenient place to store luggage and shopping while on a flying visit to Harrods or London Fashion Week.’

Amazingly there are smaller flats in the same building, with one – basically a cupboard at 89sq ft – on offer at £150,000 earlier this year. 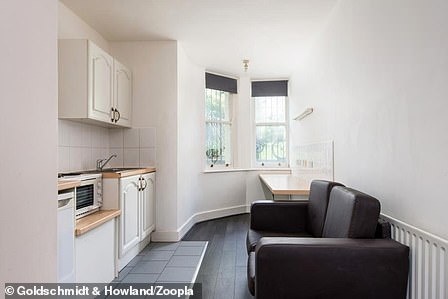 In the flat, which measures 22ft by 10ft, the owner has crammed in a kitchen, with sink and microwave as well as a sofa

A tiny studio flat – which doesn’t even have a bed – was on the market for a whopping £900-a-month in Belsize Park, north London, earlier this year.

The miniscule apartment is even smaller than the six-yard box on a football pitch.

The estate agent described the tiny, furnished property as ‘fantastic’.

The studio is 22ft in length and fewer than 10ft in width – meaning it has a mere 242 square feet of space.

The advert says the flat does come with free WiFi. Despite the lack of space, it is on the market for a whopping rental price.

The flat is situated in Belsize Park, north west London, which is a popular celebrity haunt.

Tom Hiddleston and Jude Law have also lived in the posh area, along with Sean Bean and Hugh Laurie.

However their celebrity pads are much larger than the tiny studio flat.

Outrage over 89sqft flat with no bedrooms or bathrooms 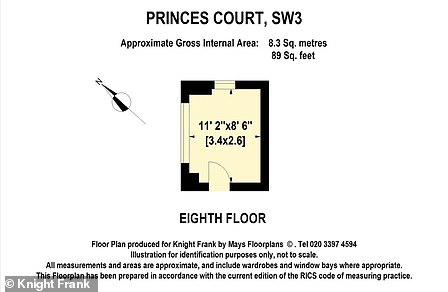 Regulations prevent property developers building new homes that are smaller than 400sqft (37sqm) but as the flat was first leased in 1976, the flat is not technically breaching current laws

MPs slammed the UK’s broken housing market after a flat in Princes Court in Knightsbridge was put on the market for £150,000 despite having no bedrooms or bathrooms.

It overlooks the capital’s prestigious Harrods department store and Hyde Park, but there is a catch — the pad is only 89sqft (8.3sqm).

Politicians blasted the ‘outrageous’ listing, saying it is demonstrates the need for more affordable homes in the capital.

Knight Frank, selling the house, said the flat complies with ‘all relevant regulations’ and added it comes with heating and hot water included in the service charge.

A spokesman said: ‘The minimum space standards are only relevant to planning permissions in London for newbuild residential developments and converted properties constructed after 2011.

‘The property at Princes Court on Brompton Road was originally leased in 1976 and has been used as residential accommodation prior to the minimum space standards coming into effect.’

Doors are the windows to the home at one ‘ridiculous’ listing, again in London 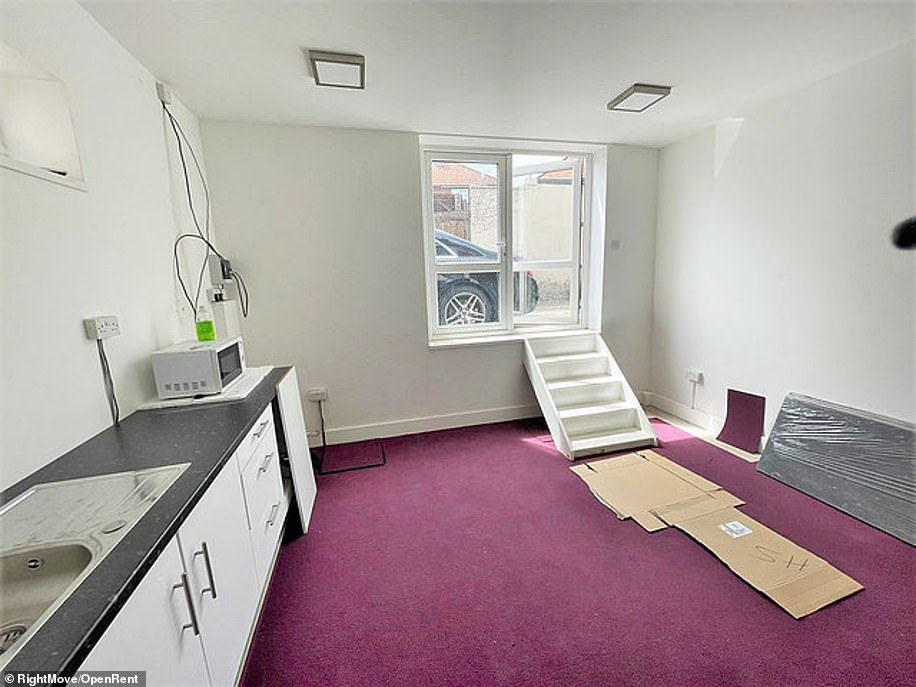 House hunters reacted with outrage after a ‘family friendly’ studio flat was listed online where the door appears to be a repurposed WINDOW.

Those searching for properties on the website Rightmove couldn’t believe their eyes when they spotted the apartment being put up for rent.

The studio flat on London’s Edgware Road is on offer for a staggering £750 a month and has been advertised as having ‘great location for transport links’.

But it can only be accessed through what appears to be a window with steps leading down to the main room.

The tiny bathroom also appears to be converted out of a former cupboard, while the kitchen appeared to have only a sink, microwave and a small fridge.