Tired-looking Russian defence minister Sergei Shoigu, 66, appears on TV as Kremlin battles to dispel rumours that he has suffered a heart attack

Russian defence minister Sergei Shoigu appeared tense and tired as he was today shown on TV chairing a meeting as the Kremlin sought to dispel swirling rumours that he had suffered a heart attack.

The wax-faced 66-year-old army general, whose voice was rough and raspy, was reading from notes in an apparent crisis session to obtain more cash for his disastrous war from the Finance Ministry.

There was no immediate proof of when the televised Shoigu session broadcast took place, although it clearly referred to the ‘special military operation’ – Kremlin-speak for the war – underway in Ukraine. 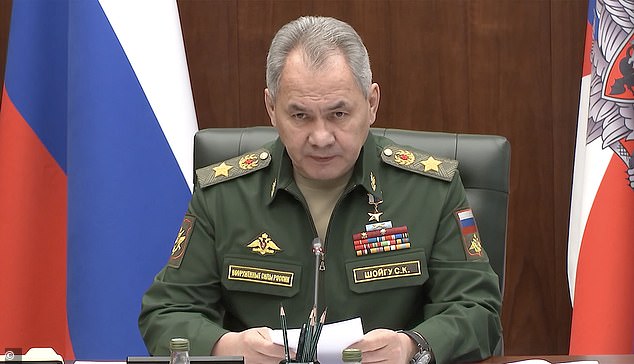 There is also speculation that Shoigu had sought to resign at the start of the war – like other members of Vladimir Putin’s inner circle – but that his plea was rejected by the strongman.

The defence minister told military officials after a session with the finance ministry that it was essential to keep up the pace of weapons deliveries to troops.

The previous definite appearance of Shoigu was on 11 March, although the Russians say he attended a video conference with Vladimir Putin on 24 March. Sceptics believed this was a fake with Shoigu’s face on the screen but likely not in fact in attendance.

Ukrainian government advisor Anton Gerashchenko on Friday seized on speculation in Moscow that Shoigu had suffered either heart problems or an actual heart attack.

‘Shoigu’s heart attack happened after a tough accusation by Putin for a complete failure of the invasion of Ukraine,’ said the Ukrainian. Ksenia Shoigu, 31, the daughter of Russia’s Minister of Defence Serge, pictured with her father

He appears to allude to a version in Moscow that Putin and Shoigu fell out in the first few days of the war in February when it became clear a quick victory was out of the question.

One claim is that security was strengthened around Shoigu – ostensibly to stop Western assassination attempts.

Some in the inner circle perceived this as a ‘form of arrest’, it was claimed.

Shoigu – who has been mentioned as a plausible Putin successor – complained of a deterioration of his health, but the Russian leader was said to be unsympathetic.

One one occasion, Putin was informed that Shoigu ‘felt unwell and complained of pain and burning in the region of his heart’. Ksenia pictured with her father, holding her baby daughter Milana, and with husband Andrey

The Russian president denied medical assistance to his friend and instead branded him a ‘malingerer’, according to General SVR Telegram channel, which claims inside sources.

‘Only after the president was informed that Shoigu had lost consciousness did Putin allow physicians to be admitted.’

It is also claimed that Shoigu had sought to resign on 10 March but was refused by Putin, who said he would be transferred to other duties after the war.

Meanwhile, Putin is said to be taking military advice on the war from Valery Gerasimov, Chief of the General Staff of the Russian Armed Forces, rather than Shoigu whose role at meetings is like that of ‘an extra’.

There have been rumours that others who sought to resign since the start of the were Head of the Central Bank, Elvira Nabiullina, FSB Director Alexander Bortnikov, and even Foreign Minister Sergei Lavrov. Shoigu’s daughter Ksenia, 31, a financial analyst, caused surprise by posing with her baby in an image dominated by the blue and yellow colours of Ukraine

Nabiullina was persuaded by Putin to work for ‘several months’ and ease the major financial crisis now engulfing sanctions-hit Russia before being allowed to quit and even emigrate.

Shoigu’s daughter Ksenia, 31, a financial analyst, caused surprise by posing with her baby in an image dominated by the blue and yellow colours of Ukraine.

In the video issued today, Shoigu said: ‘Taking into account the conduct of the special military operation, this year it is necessary to maintain the set pace for the supply of advanced weapons to troops.’

This should include ‘robotic systems, information support and electronic warfare…and logistics’. One one occasion, Putin was informed that Shoigu ‘felt unwell and complained of pain and burning in the region of his heart’

When asked about Shoigu’s whereabouts, the Kremlin said the defence minister was devoting less time to media appearances because of the war.

Spokesperson Dmitry Peskov said: ‘The defence minister has a lot on his mind right now.

‘A special military operation is under way. Now is not really the time for media activity.’

This comes as it was revealed that Putin had started a witch-hunt among his inner circle and was growing wary of close allies after the US and Britain received leaks of his military plans.

According to sources the leaks, which have been passed by London and Washington to Kyiv, had been blamed as the reason Russia’s top generals and elite forces have been targeted so effectively in Ukraine.