Tommy Robinson has been summonsed to court to face contempt proceedings after he failed to attend the High Court for questioning over his finances.

Robinson, whose real name is Stephen Yaxley-Lennon, was due to appear at the Royal Courts of Justice in London last month in connection with unpaid legal bills after he lost a libel case brought against him by a Syrian teenager last year.

But a High Court judge has now issued a summons ordering Robinson to attend a hearing on May 6 after the 39-year-old did not appear for questioning.

In an order dated last Friday, Mr Justice Nicklin said Robinson’s non-attendance on March 22 was referred to him as a potential contempt of court.

The judge wrote that he considered ‘a prima facie case of contempt of court is made out’ and was therefore issuing the summons.

His order warns that if Robinson fails to attend the hearing in May to face the contempt allegation, a warrant for his arrest could be issued.

The news comes less than two weeks after he says he was arrested for ‘national security reasons’ on holiday.

While on his Easter getaway to Mexico with his family he shared footage of him allegedly being arrested at Cancun Airport.

‘I have been arrested, separated from my kids and now I’m being deported as a matter of national security’, he said. 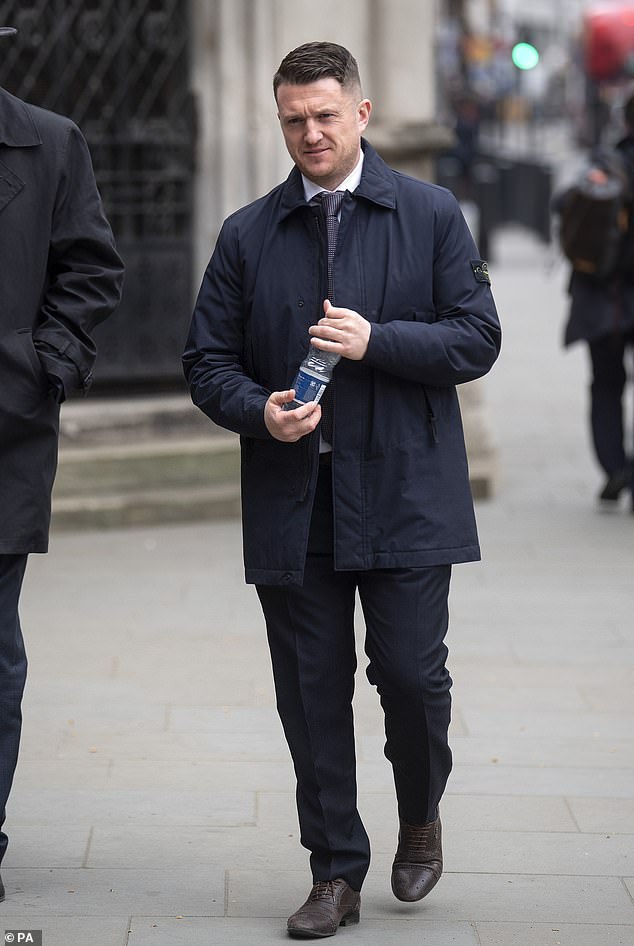 Tommy Robinson (pictured), 39, has been summoned to court to face contempt of court proceedings after not turning up at High Court for questioning over his finances 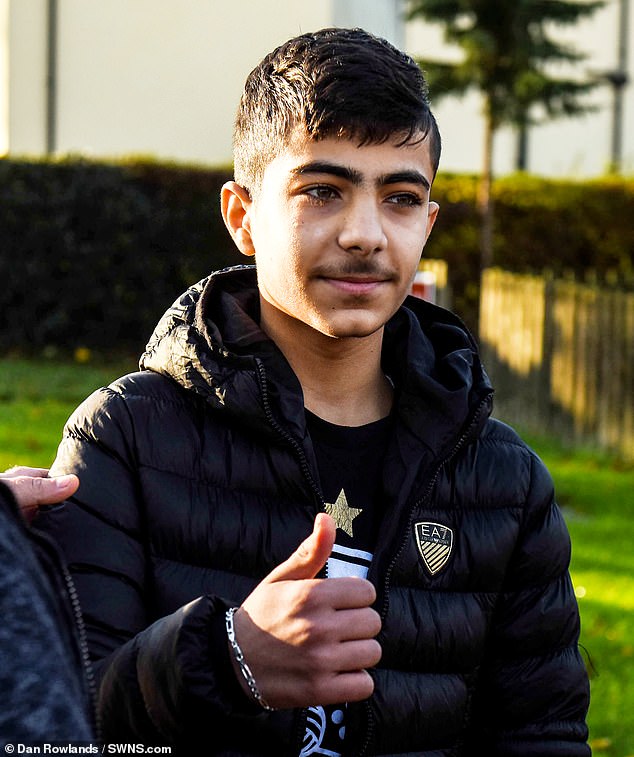 Robinson was due to appear at the Royal Courts of Justice in London last month in connection with unpaid legal bills, understood to be over half a million, after he lost a libel case brought against him by Jamal Hijazi (pictured) 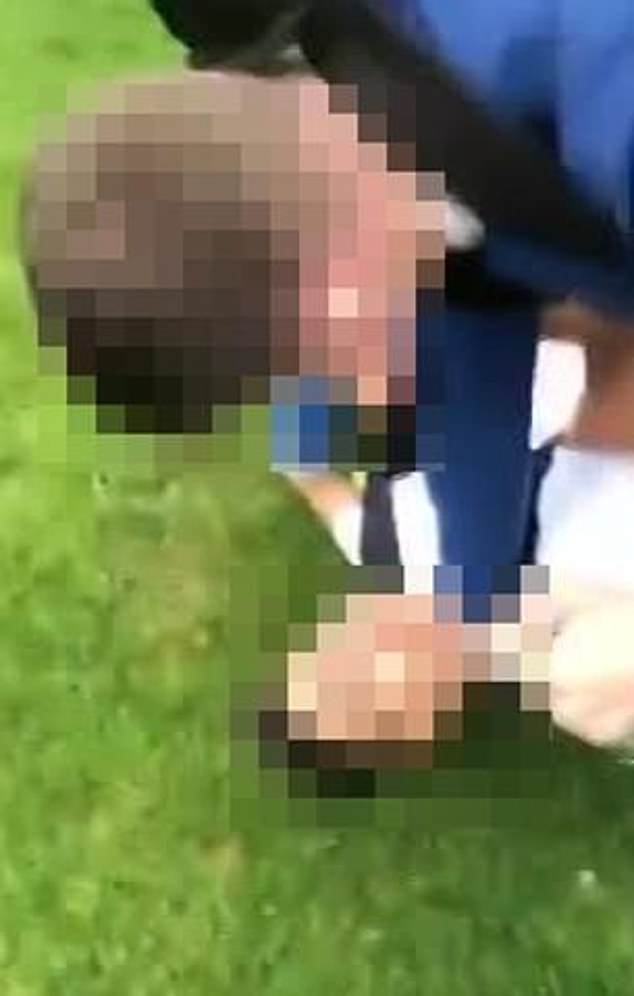 The libel case revolved around a viral video in which Mr Hijazi was assaulted at his school (pictured), Robinson then publicly made false claims about the teenager

The English Defence League founder was successfully sued by Jamal Hijazi after the then 15-year-old was assaulted at Almondbury Community School in Huddersfield, West Yorkshire, in October 2018.

Shortly after a video of the incident went viral, Robinson claimed in two Facebook videos that Mr Hijazi was ‘not innocent and he violently attacks young English girls in his school’.

In the clips viewed by nearly one million people, the 39-year-old said Jamal ‘beat a girl black and blue’ and ‘threatened to stab’ another boy at his school, claims a High Court judge later found to be false.

After a pre-trial hearing for the libel case in November 2020, Robinson was ordered to pay more than £43,000 in legal costs.

He declared bankruptcy about four months later, which the court heard has since been discharged.

In February, Mr Hijazi’s lawyers successfully applied for an order requiring Robinson to return to the Royal Courts of Justice to answer questions about his finances.

Ian Helme, for Mr Hijazi, previously told the court there was information ‘that what is stated in his bankruptcy application is not a full account of (Robinson’s) assets’. 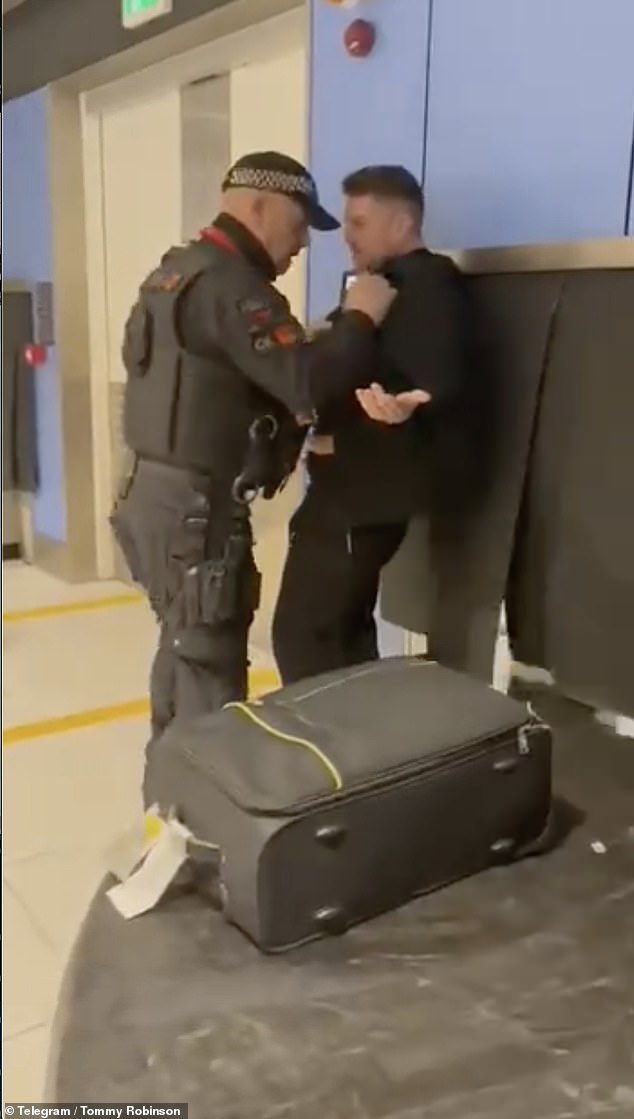 Earlier this month Tommy Robinson was detained by police (pictured) who accused him of a security breach at Manchester Airport, shortly after he was deported from Cancun Airport

In his witness statement, Jamal said he joined Almondbury Community School in the city at the age of 13, with very poor English, and was met with hostility from some other pupils.

He wrote: ‘I faced a lot of issues when I was at the school, including a campaign of bullying and attempts by other students to make me unhappy, so I would go home.

‘I was called names which at first I did not understand.

‘My Syrian friend explained to me what these words meant and suggested I should report these incidents to a teacher because the names were racist.

‘I refer below to a gang of students who regularly bullied me. They often called me ‘P**i’, ‘Syrian’ or ‘immigrant’ in an aggressive way.’

Jamal said the attack in the viral video was not isolated and detailed other incidents, including being threatened with a knife in November 2017.

He said his sister Fariha was also bullied, referencing an incident where her hijab was deliberately removed by another student.

Jamal also said in his statement he had ‘no idea’ about Robinson before the Facebook videos were made.

He added: ‘His job has been explained to me by both my litigation friend and my solicitors, but I still do not fully understand what he does.

‘I understand that a part of what he does is to make content and that the more attention it gets, the more money and support he can gain.’

After Robinson failed to appear in March, Mr Helme said lawyers had ‘tried various methods to bring this to Mr Lennon’s attention’ including sending documents by post to multiple addresses – including one in Tenerife and his ex-wife’s home – and to different phone numbers via WhatsApp.

Judge John Dagnall found that Robinson knew ‘perfectly well’ that he was due to attend court on Tuesday, adding that Robinson had emailed the court asking for the hearing to be adjourned.

Judge Dagnall said that ‘all I can do’ is to refer Robinson’s non-attendance to a High Court judge.

However, the judge added that any committal for contempt of court could be suspended.

When originally ordered to pay the costs to Mr Hijazi, Robinson, who represented himself and attended the remote hearing by video link, said he was ‘gobsmacked’ by the costs, which he said included £70,000 for taking witness statements.

He said at the time: ‘I’ve not got any money. I’m bankrupt. I’ve struggled hugely with my own issues these last 12 months… I ain’t got it.’

The sentencing judge acknowledged ‘there are limits on what can be enforced against him’ as a result of Robinson’s bankruptcy.

Catrin Evans QC, for Jamal, previously said that Robinson’s slurs led to the teenager ‘facing death threats and extremist agitation’ and that he should receive damages of between £150,000 and £190,000.

In his judgment, Mr Justice Nicklin accepted that Jamal suffered ‘particularly severe’ consequences due to Robinson’s videos, which he ruled made claims that were without foundation.

He said: ‘The defendant’s allegations against the claimant were very serious and were published widely. The defendant has admitted that their publication has caused serious harm to the claimant’s reputation.’

Robinson was previously jailed after being found in contempt of court after he filmed men accused of the sexual exploitation of young girls and live-streamed the footage on Facebook, in breach of a reporting ban, outside Leeds Crown Court in May 2018.

He was sentenced to 13 months after being found in contempt of court on the day of the broadcast. He served two months in jail before being freed after that finding of contempt was overturned by the Court of Appeal in August 2018.

But the case was then referred back to the Attorney General and he was jailed again in July 2019.