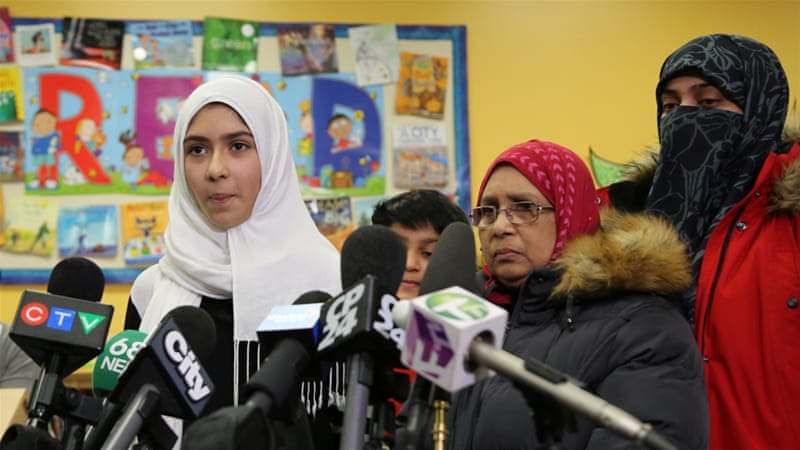 Police in the Canadian city of Toronto are investigating a possible hate crime after an 11-year-old Muslim girl was attacked by a man who allegedly tried to cut off her hijab twice on her way to school.

Sixth-grade student Khawlah Noman was walking with her younger brother on Friday near the Pauline Johnson Public School in Toronto when a man holding scissors came from behind and started cutting her headscarf, the victim said.

The girl turned and screamed, forcing the suspect to flee. But shortly after the first assault, the same man returned and “continued cutting” Noman’s headscarf while grinning, before running away.

“Sadly, someone insulted me by cutting my hijab two times,” Noman, who was not hurt in the incident, told reporters. “I felt really scared and confused because I didn’t feel comfortable that people are doing this.”

The hijab is a headscarf worn by many Muslim women who feel it is part of their religion.

Police described the suspect as a medium-built Asian man in his 20s.

‘Not what Canada is’

Prime Minister Justin Trudeau condemned the attack, along with other Canadian politicians.

“My heart goes out to the young girl who was attacked, seemingly for her religion,” he said during a speech in London, Ontario. “I can’t imagine how afraid she must have been. I want her and her family and her friends and community to know that that is not what Canada is.”

Ontario Prime Minister Kathleen Wynne called the alleged assault a “cowardly act of hatred, which has no place” in the province.

“This is not who we are,” she wrote on Twitter. ” We must stand firm in our support to this young girl who was assaulted simply for wearing a hijab.”

Since 2013, hate crime has been on the rise in Canada. In 2016, there were 1,409 police-reported hate crimes, according to Canada’s national statistical agency.

A gunman shot and killed six Muslim men at the Quebec Islamic Cultural Centre in Quebec City, the provincial capital, on January 29 last year. Several others were injured.

Incidents of Islamophobia have increased in Quebec in recent years. The full-face covering became a big issue in the 2015 Canadian federal election, especially in Quebec, where the majority of the population supported a ban on it at citizenship ceremonies.

After the attack, Noman told local reporters that she was scared to walk to school.

Addressing her attacker, the girl said: “What you’re doing is really wrong, you should not act like this, and especially, I’m a kid.”