A truck driver who was drug affected and sleep deprived when he caused a head-on crash that killed a mother and her son – and then hid his diary and ice pipe – has been jailed for 13 years.

Amanda Kilmister and her 12-year-old Harrison were killed and two family members were seriously injured when Ryan Kenny’s prime mover veered onto the wrong side of the Murray River Highway and crashed into the family’s Audi on November 2, 2018. 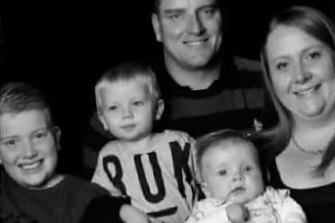 Paul and Amanda Kilmister and sons (from left) Harrison, Morgan and Austin.

Ms Kilmister was driving husband Paul and three of their four sons home after dinner in Corowa when at 9.48pm she had little chance of avoiding the collision near Brimin. After the crash, witnesses heard Mr Kilmister say, “He was on our side of the road”.

Kenny was an experienced truckie who worked 14 hours in the 24 hours before the crash and only had five hours of sleep in that time, the County Court heard on Wednesday.

The court heard he knew he was breaching industry rules related to rest and work when he took on extra work for an abattoir because another driver was unwell.

Four weeks later, police found Kenny’s diary, ice pipe and a bag of white crystals stashed in a tree 140 metres from the scene. 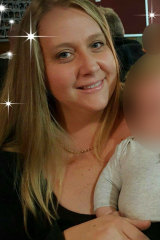 Judge Carolene Gwynn acknowledged Kenny might have been in shock when he hid the items but said “it is most disturbing that your priority immediately after the accident was to protect your own interests”.

“It is perhaps trite to say but the impact of your offending on the Kilmister family has been catastrophic,” Judge Gwynn said in ordering the 33-year-old serve eight years and nine months before he is eligible for parole.

Mr Kilmister had daily physical struggles with an acquired brain injury and chronic pain, the court heard, was unlikely to work again and suffered immense emotional anguish through the loss of his wife and a son.

Judge Gwynn said Kenny took a grave risk driving that night, should have taken extra care in an unfamiliar truck, and found his culpability high. Prosecutors had argued the truckie ought to have known he would have been fatigued and the ice in his system meant he was incapable of driving safely.

“The risks associated with driving a heavy vehicle while fatigued and impacted by methamphetamine use instead of being in proper control of that vehicle represents a grave set of circumstances,” the judge said.

Kenny told a psychologist he was not a habitual drug user but used ice to stay alert when working. But he had two previous court appearances for drug-driving and the judge said he ought to have learnt from those incidents.

Kenny also told investigators he was “encouraged” by the transport company he worked for to take on the extra driving.

He pleaded guilty to two counts of culpable driving causing death, two of negligently causing serious injury and one of destroying evidence.

The father of two became emotional at times as he watched the hearing on a video link from prison. He has already served 75 days.