Washington: The Trump administration has blocked a planned deposition from Gordon Sondland, the US ambassador to the European Union and a central figure in the Democrats' impeachment inquiry, according to a statement by his lawyer.

Sondland, the US ambassador to the European Union was scheduled to be deposed on Tuesday morning, local time, before House committees seeking information about his activities as President Donald Trump urged Ukraine to investigate his political opponents, according to his lawyer, Robert Luskin. 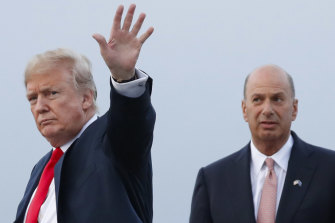 Luskin said Sondland was not appearing at the direction of the State Department.

"As the sitting US Ambassador to the EU and employee of the State Department, Ambassador Sondland is required to follow the Department's direction," Luskin said.

"Ambassador Sondland is profoundly disappointed that he will not be able to testify today. Ambassador Sondland travelled to Washington from Brussels in order to prepare for his testimony and to be available to answer the Committee's questions."

Text messages made public last week show that Sondland, whose portfolio does not include US-Ukraine relations, inserted himself into the effort to obtain a commitment from Ukraine to launch the investigations. At the time, the government in Kiev was eagerly awaiting the release of nearly $US400 million ($593 million) in US military aid and the arrangement of a face-to-face meeting between Trump and Ukrainian President Volodymyr Zelensky.

In one text message, Sondland wrote that Trump "really wants the deliverable," referring to a clear demonstration from Ukraine that it would undertake the investigations.

Sondland worked closely with Kurt Volker, the US special envoy to Ukraine, to shape US foreign policy around Trump's desire to investigate Joe Biden's son Hunter, who was on the board of a Ukrainian gas company, as well as an unsubstantiated theory that Ukraine had interfered in the 2016 presidential election to undermine Trump's candidacy.

Lawmakers heard last week from Volker after he resigned his position and turned over his communications to Congress. Sondland remains in his post and has turned over the documents that lawmakers want to the State Department instead, setting up a fight between the legislative and executive branches over access to the information.

Sondland, 61, appears never to have held a position in government before being named the ambassador to the EU in June 2018. He built his fortune acquiring and managing luxury hotels in the Pacific Northwest and gave $US1 million to Trump's inaugural fund via shell companies that obscured his involvement.

The text messages released last week show what appear to be Sondland's effort to minimise political fallout from the administration's dealings with the Ukrainians.

On September 9, William "Bill" Taylor, the senior US diplomat in Ukraine, texted Sondland: "I think it's crazy to withhold security assistance for help with a political campaign."

Hours later, Sondland, who had been aggressively pursuing a public agreement for Ukraine to launch the investigations, replied, "Bill, I believe you are incorrect about President Trump's intentions. The President has been crystal clear: no quid pro quo's of any kind."