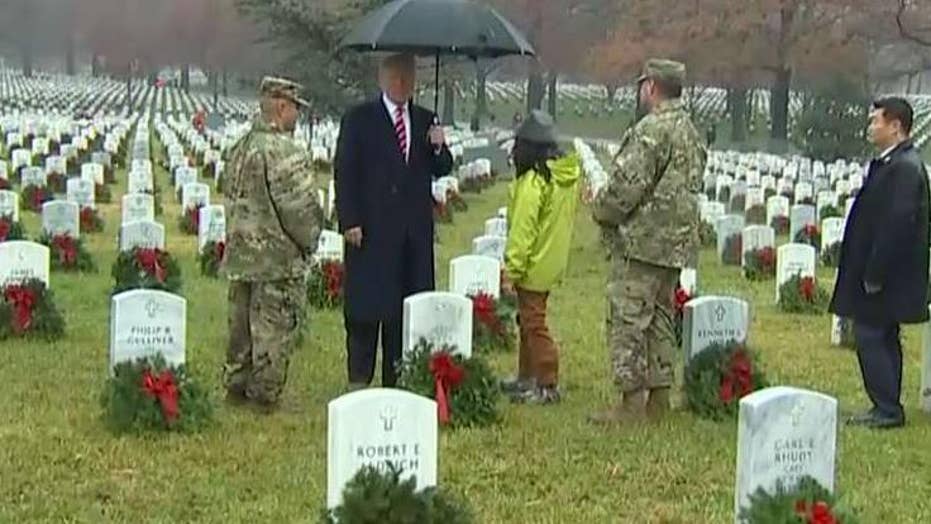 President Trump arrives at Arlington National Cemetery to participate in Wreaths Across America.

President Trump paid a Saturday visit to Arlington National Cemetery, where thousands of volunteers had just taken part in the rain in the annual holiday wreath-laying tribute to those who served—and died– in America’s wars.

Trump made the unscheduled stop to the famous military ceremony about 2:15 p.m. ET, hours after the event began.

"They do a great job, a really great job. Thank you," Trump said during the visit.

Every December, Wreaths Across America places wreaths on the graves at Arlington and other veterans cemeteries.

“Spending a rainy Saturday morning helping with Wreaths Across America at Arlington!!” Jessica Moyer told her followers on Facebook. “Such a humbling experience.”

This year, the organization shipped a staggering 1.75 million wreaths to 1,640 locations that will hold ceremonies across the U.S., according to the Pentagon.

WREATHS ACROSS AMERICA FACES SHORTAGE OF WREATHS FOR ARLINGTON CEMETERY

A few dozen locations overseas are participating. Wreaths Across America says 2018 is the first year permission was granted to place wreaths at Normandy to honor those who died during World War II’s D-Day invasion.

The Wreaths Across America caravan departed Columbia Falls, Maine, where the wreaths were made on Dec. 8 for the journey to Arlington.

"We know that for a Gold Star Family member, every day is Memorial Day for them and we understand that at the holidays, it's an especially difficult time with an empty seat at the table all year round,” Bre Kingsbury of Wreaths Across America said, according to Fox 5 DC.

“The holidays, it can be especially tough. So that wreath really is a symbol that shows them that they are not forgotten and that their loved one is not forgotten," she said.

This is the event’s 27th year at Arlington, honoring the men and women who've served in the U.S. armed forces.