Footage from the anti-racism demonstrations in Pennsylvania, over the weekend shows the group screaming expletives at white diners before one protester appears to swipe an elderly couple's beer. 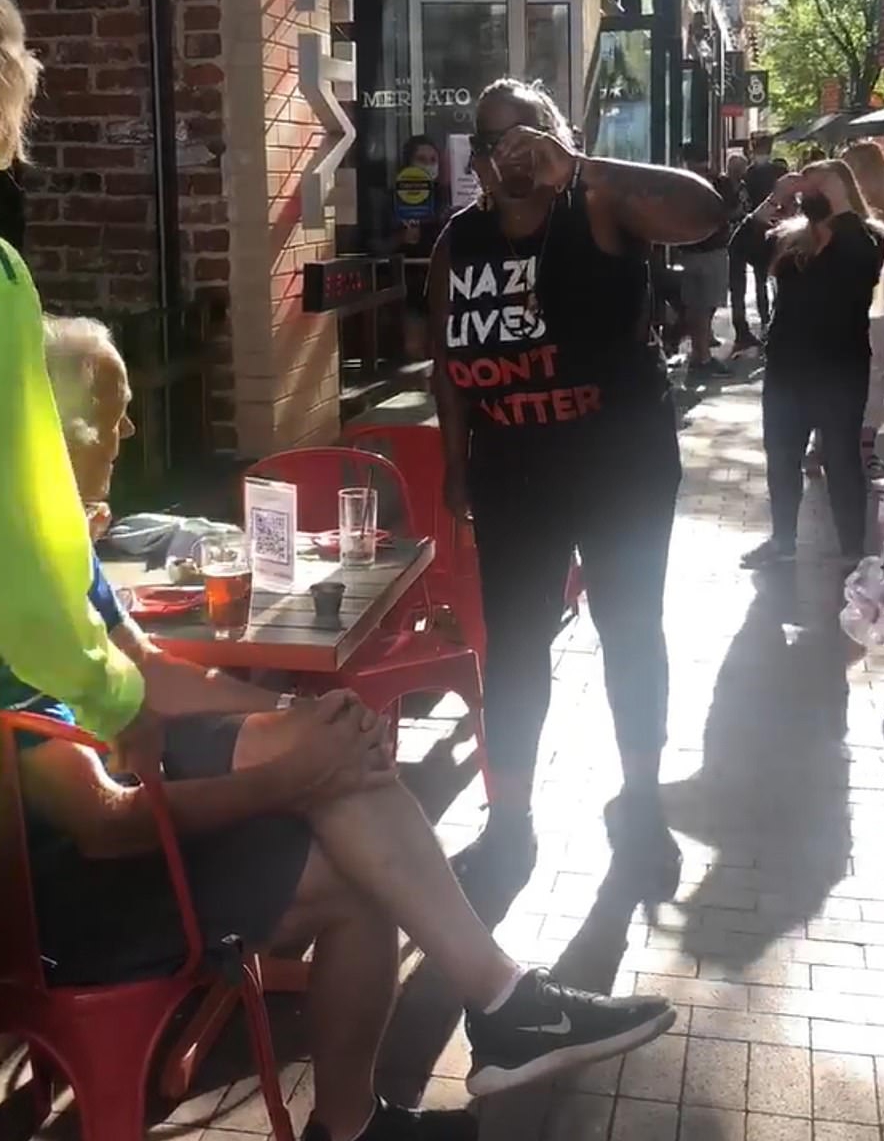 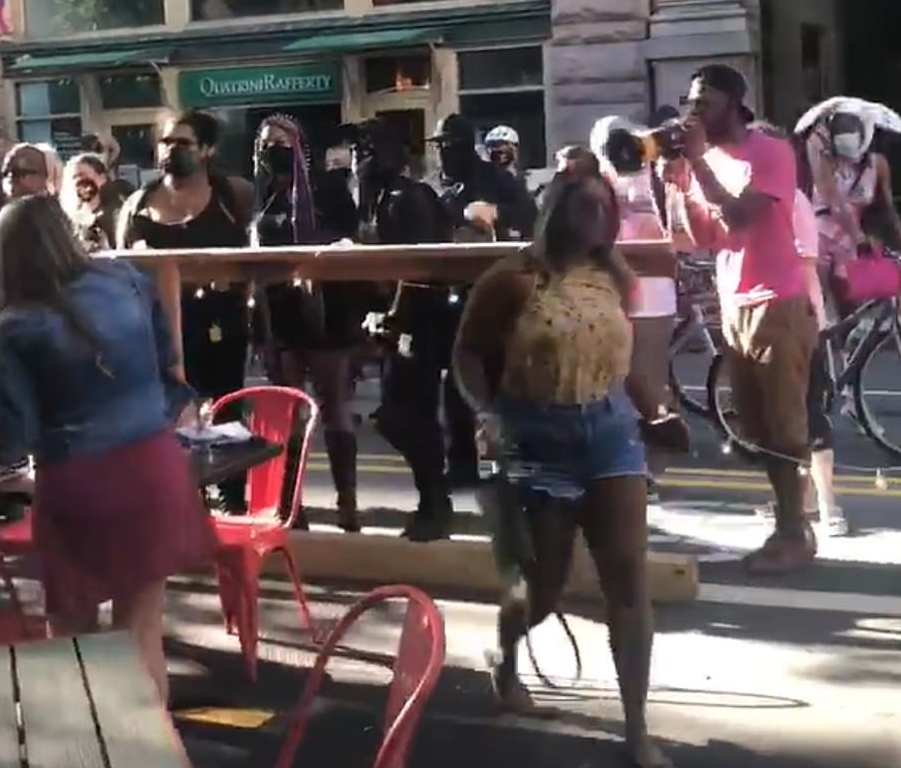 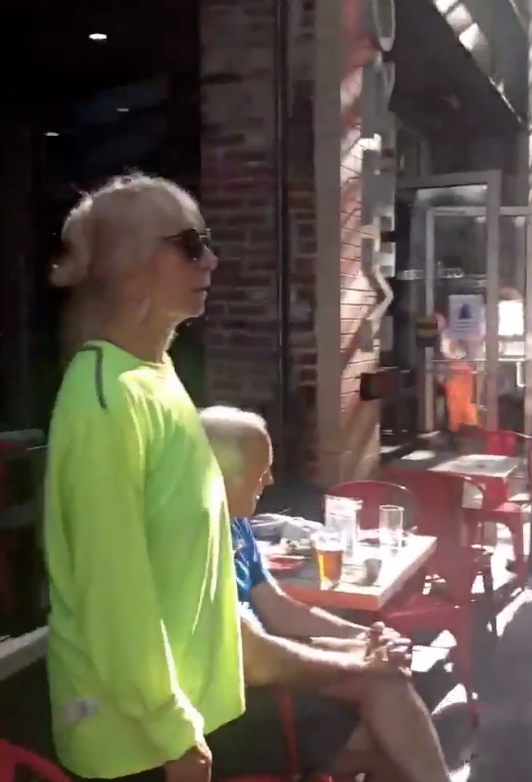 The president has now commented on the incident, telling Twitter followers on Tuesday: "BLM Protesters horribly harass elderly Pittsburgh diners, scaring them with loud taunts while taking their food right off their plate. These Anarchists, not protesters, are Biden voters, but he has no control and nothing to say. Disgraceful. Never seen anything like it. Thugs!

"….And because of weak and pathetic Democrat leadership, this thuggery is happening in other Democrat run cities and states. Must shut them down fast. Biden and his most Liberal in Senate running mate, Kamala, won’t even talk about it. They won’t utter the words, LAW & ORDER!"

However, the protesters have insisted they are not aggressors.

But Nique Craft – who is seen in the footage marching up to an elderly couple's table before grabbing a beer and downing it – told The Pittsburgh Post-Gazette the woman invited her over for a drink.

The BLM activist, who identifies as nonbinary, said a group of men began screaming "Blue Lives Matter" at the group, which the footage does not show.

They said during the shouting match one man swung a bike at protesters, and another swung a skateboard.

According to Craft's account, a strange man began grabbing their hair and putting his hands on their chest – insisting he was trying to avoid further confrontation.

Craft claimed following the physical confrontation, another person – who appears to be the white-haired elderly man seen in the clip – criticised the protester's actions.

Craft said it was at this point that the elderly woman with him, seen in the clip wearing a bright green top, invited them over for a drink to discuss the situation.

“So, being a theatrical, snarky type of person that I am, I said that I don’t have time to wait for you to order another beer; I will take the one you have,” Craft explained.

The moment, captured in viral footage sparked outrage, with one user writing: "These terrorists have no place in Pittsburgh or anywhere in America.

In the video, another protester also appears to deliberately smash glasses to the floor – which the BLM activists say was an accident. 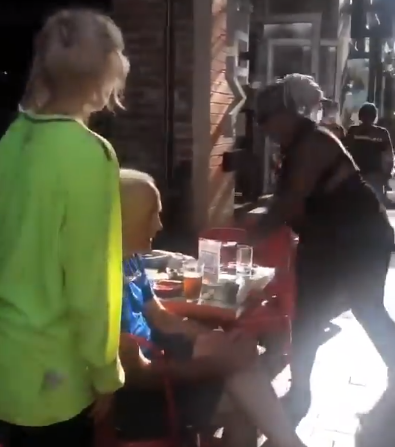 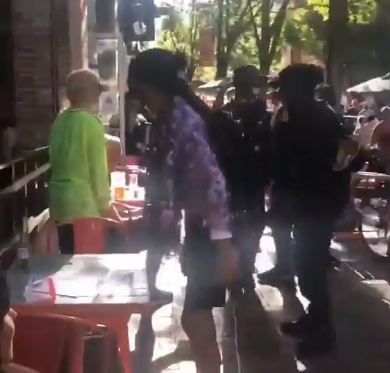 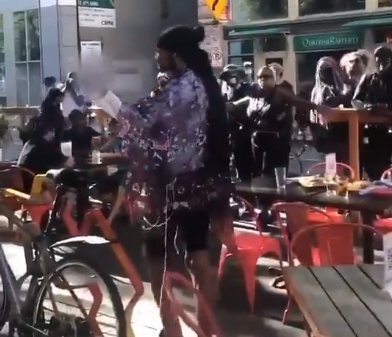 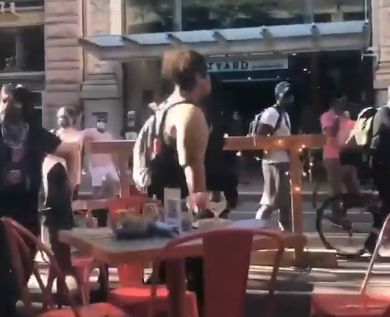 Another man, Lorenzo Rulli, who can be seen in the clip wearing a purple jacket, swearing at diners and showing them the middle fingers, also insited the full story had not been shown.

He said: "We don’t target businesses. Our restaurant industry in the city supports us very much.

He added: "The reason I engaged the individual man and his wife is because her husband called me 'an embarrassment' and 'disgusting'."

On Sunday, local station WTAE revealed authorities were looking into the video from the restaurant and different footage of a cyclist carrying a bike who was targeted by enraged protesters.

Tensions escalated over the holiday weekend, which saw diners harassed and a car plowing into a crowd.

The supposedly peaceful protests were punctuated with scenes of violent clashes – including the moment one man is mown down by a car.

A red car can be seen driving directly into a group of protesters standing at an intersection in Rochester, New York, as tensions across the country reached a boiling point.

Screams and shouts can be heard as the car drives directly through the group, spraying an unknown substance at them.

A sickening thud can be heard and a woman screams as a man rolls across the car's bonnet and crashes to the ground.

The protester who shared the footage said: "The driver was not arrested at the scene. Volunteer medics responded to the injured protestors."

The marches across America are in response to the of the shooting of Jacob Blake, and the deaths of Daniel Prude and George Floyd. 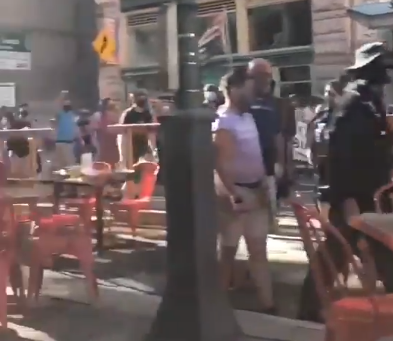 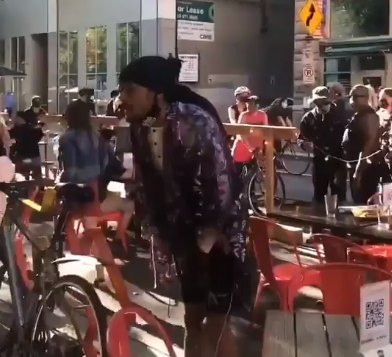