Washington: It was a dizzying day for NASA. First, the agency announced a plan to allow private citizens to fly to the International Space Station and stay for the tidy sum of $US35,000 ($50,000) per night. The news flash was a major change in policy for NASA, but was soon overshadowed by a tweet from President Donald Trump that called into question his own administration's much-publicised goal of returning astronauts to the moon by 2024.

"For all of the money we are spending, NASA should NOT be talking about going to the Moon – We did that 50 years ago," Trump said on Twitter. 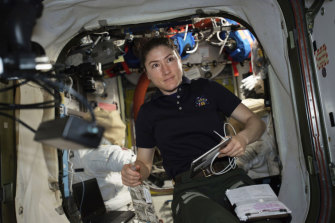 Astronaut and Expedition 59 Flight Engineer Christina Koch works on US spacesuits inside the International Space Station.Credit:AP

"They should be focused on the much bigger things we are doing, including Mars (of which the Moon is a part), Defense and Science!"

It is unclear if Trump was unhappy with the current NASA plan or was expressing exasperation at the pace of human exploration of deep space. Trump's confusing language about the moon being part of Mars plausibly referred to NASA's framing of the moon plan as part of a longer-term goal of exploring Mars.

The administration's decision to send astronauts back to the moon followed a unanimous recommendation to do so by the National Space Council, chaired by Vice President Mike Pence, in October 2017. This is a strategic pivot for NASA, which under Barack Obama did not plan to repeat the Apollo-era achievement of landing astronauts. That had been the goal of NASA under President George W. Bush, but Obama killed the program.

Now, NASA has pivoted again to the moon, and Trump had hyped the plan on several occasions. NASA initially aimed for a landing in 2028, but earlier this year Pence, citing Trump's wishes, ordered the agency to get there by 2024.

That would potentially be before the end of a second Trump term.

Trump's confusing tweet came just hours after NASA's administrator, Jim Bridenstine, warned that the biggest challenge to the moon plan was not technological but rather "political risk."

Speaking at the International Space Development Conference in Arlington, Bridenstine said, according to SpaceNews, "How do we retire the political risk? We go faster. We accelerate the program. The longer it drags out, the more risk there is we're going to get diverted into something else."

Bridenstine late Friday offered no pushback to his boss, instead echoing – and interpreting – Trump's tweet. "As @POTUS said, @NASA is using the Moon to send humans to Mars!" Bridenstine wrote on Twitter. He added a shout-out to NASA's robotic missions: "Right now, @MarsCuriosity and @NASAInSight are on Mars and will soon be joined by the Mars 2020 rover and the Mars helicopter."

A White House official said late on Friday that the administration's goal "has always been to get to Mars" and that the moon 2024 plan would enable the United States to reach Mars "roughly a decade after creating a sustainable presence on the lunar surface."

The big news of the day was supposed to be the new commercial opportunities at NASA. The agency wants to open the International Space Station to more commercial interests, including filming advertisements. NASA touted the plan as a way to help fund its ambitious plan to return astronauts to the moon by 2024 as it tries to build a sustainable economy in space.

But it's unclear how much money the agency stands to make under the new policy.

NASA's announcement is a significant change for the agency, which has had a long-standing prohibition against allowing tourists on the station. Russia, however, has allowed several private astronauts on the station.

Under the NASA plan, as many as two private citizens per year could fly to the station and stay for up to 30 days, with the first mission coming as early as next year. 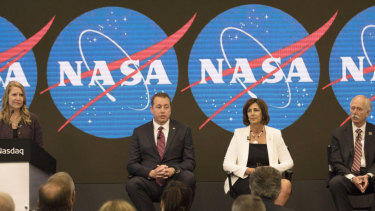 Jeff DeWit, NASA's chief financial officer, estimated the cost per trip would be about $US50 million a seat. But the cost and arrangements would be left to SpaceX and Boeing, the two companies NASA has hired to fly crews to the station. They would keep that money and also have to make sure that private astronauts "meet NASA's medical standards and the training and certification procedures" for crew members.

While onboard the station, NASA would charge people for food, storage and communication, a cost that would come to about $US35,000 a night.

"But it won't come with any Hilton or Marriott points," DeWit said.

In addition, NASA would charge companies as much as $US18,000 per kilogram for a round trip to and from the station. It also would charge for astronauts' time: $US17,500 an hour.

Still, that is not likely to make a dent in the massive costs required to get people to the surface of the moon.

Space Adventures, a Virginia-based company that has helped several private citizens get to the station on Russian rockets, has a contract with Boeing to help sell seats aboard its spacecraft. A spokesman said the company has not yet determined a price.

Right now, commercial activity on the station is largely limited to science experiments. "We have no idea what kinds of creativity and literally out-of-the-world ideas can come from private industry," Bill Gerstenmaier, NASA's head of human exploration, said during a news conference.

Gerstenmaier acknowledged that the policy changes were a risky bet that may not produce results immediately.

"Economic market development takes a long time; transitions take a long time," he said. "This is the very beginning."

The announcement comes as the agency is trying to return humans to the moon by 2024, a mission that officials said would require significant additional funding.

NASA has already amended its budget request for next year to ask for an addition $US1.6 billion, and has said that it would need significantly more money in the years to come to have any chance at pulling off such an ambitious plan.

There is a long history of businesses going to space to market their products. In 1999, Pizza Hut paid to paint its logo on a Russian rocket. In the mid-1990s, an Israeli milk company filmed a commercial on the space station Mir, and a pair of Russian cosmonauts even appeared on QVC to sell a pen able to write in a weightless environment.

Bridenstine has said he wanted to raise the profile of the agency's astronauts by allowing them to appear in commercials and on cereal boxes. But that was met by pushback from critics who said it would violate government ethics regulations that prohibit government officials, even astronauts, from using public office for private gain.

In the proposal unveiled on Friday, NASA astronauts' participation in such activity would be limited to commercial activities "with ties to microgravity, NASA's mission or sustaining a low-Earth-orbit economy." They would be prohibited from appearing in advertisements, for example, and NASA said it would continue its policy of not endorsing any particular brand.

Traditionally, NASA has steadfastly stayed away from that – even going so far as to call the M&Ms astronauts gobble in space "candy-coated chocolates" out of fear of appearing to favour one brand of candy.

Private astronauts, however, would be free to conduct a wider range of commercial activity as long as it meets a list of requirements, such as not endangering the crew and ensuring it doesn't reflect unfavorably on NASA.

NASA's new directive would also allow a private module to be attached to the station to be used for commercial activities.

"NASA is entering an era of financial exploration where we need to discover what the different commercial activities are that could sustain a presence in low-Earth orbit," said Mike Gold, the vice president of civil space for Maxar Technologies who also served on a NASA advisory committee.