Speaking to shooting survivors, Trump suggested teachers who are ‘adept at firearms’ could help stop a school shooting.

US President Donald Trump has been slammed for suggesting that teachers should be armed to help prevent school shootings.

Trump made the divisive proposal on Wednesday during a “listening session” with survivors of last week’s mass shooting at a Florida high school.

Following the remarks, families of victims of gun violence, survivors of mass shootings, gun control advocates, teachers and some politicians called the idea “terrible” and said the administration should instead focus on reforming gun control legislation.

“It’s not personally something that I support,” Nicole Hockley, whose son Dylan was killed during the 2012 shooting at Sandy Hook elementary school in Newtown, Connecticut, told Trump.

“Rather than arming them with a firearm, I would rather arm them with the knowledge of how to prevent these acts from happening in the first place,” she said.

Trump, who admitted it was a controversial idea, said he believed “a teacher who was adept at firearms … could very well end the attack very quickly”.

He added: “I really believe if these cowards knew that the school was well-guarded … I think they wouldn’t go into the school to start off with, it could very well solve your problem.”

Trump in the past has said it was “wrong” of anyone to suggest that he was in favour of bringing guns into the classroom.

At least 17 people were killed last week when a gunman opened fire on students and teachers at the Marjory Stoneman Douglas High School in Parkland, Florida. According to police, 19-year-old Nikolas Cruz confessed to carrying out the shooting rampage.

There was an armed guard on duty at the Parkland high school last week, but he was not able to engage with the gunman before the shooting ended.

‘Teachers meant to be educators’

Alfonso Calderon, a survivor of the shooting, said arming teachers was a “terrible idea”.

“I don’t know if Donald Trump has ever been to a public high school, but as far as I’m aware, teachers are meant to be educators,” Calderon told CNN on Wednesday night.

“They are meant to teach young minds how to work in the real world,” he added.

Scott Israel, who is the sheriff in the county where the Florida shooting took place, said he doesn’t believe in arming teachers.

Several teachers took Twitter to highlight the consequences of being armed in the classroom. Many added that they don’t want to be armed.

Florida Senator Marco Rubio, who is from Trump’s Republican party, also said the idea of arming teachers had “practical problems”.

“The notion that my kids are going to school with teachers that are armed with a weapon is not something that, quite frankly, I’m comfortable with,” Rubio said during the CNN Town Hall.

Florida Democratic Senator Bill Nelson added that he believes it is a “terrible idea”.

The suggestion, which was also brought up after the Sandy Hook school shooting in 2012, has garnered support from some.

A few raised their hands when Trump asked those present at the listening session if they were in favour of the idea.

According to a Washington Post-ABC poll after the shooting, the majority of Republicans surveyed (59 percent) said they believe that arming teachers could have prevented last week’s school shooting. 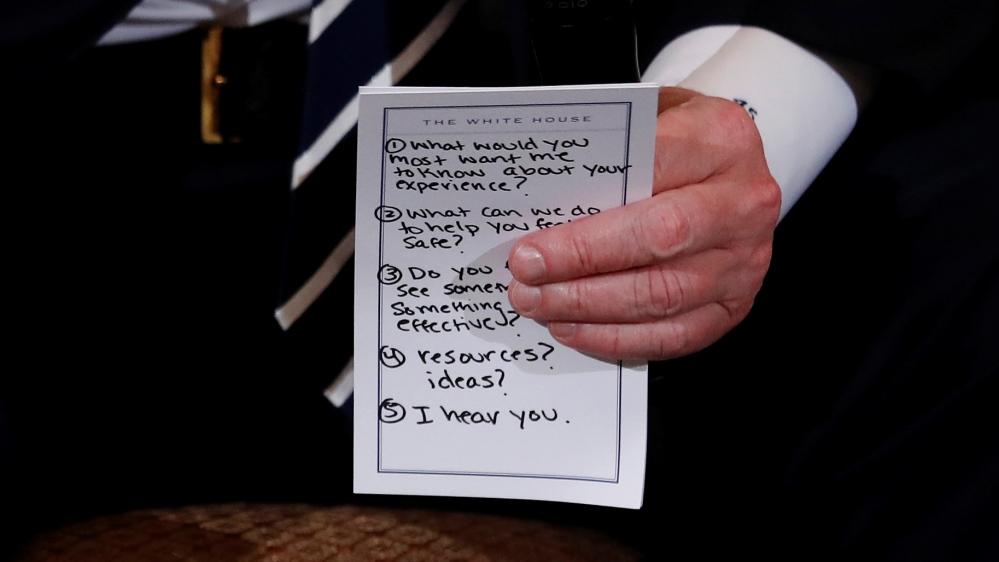 Politicians in at least six states have proposed bills this year that would make it easier to allow firearms on campuses, according to Politico.

Responding to criticism, Trump tweeted on Thursday that he “never said ‘give teachers guns'”. He said that he was suggesting legislators “look at the possibility of giving ‘conceal guns to gun adept teachers with military or special training experience”.

He added: “Highly trained teachers would also serve as a deterrent to the cowards that do this. Far more assest at much less cost than guards. A ‘gun free’ is a magnet for bad people. ATTACKS WOULD END!”

Trump, who was endorsed by the National Rifle Association (NRA) during the 2016 presidential election, also said he would be in favour of stricter background checks for gun buyers.

Earlier this week, the president called for a ban on bump stocks, a device that allows semiautomatic rifles to fire at the rate of a machine gun.

Students throughout southern Florida walked out of their classrooms to demand stricter gun control.

Thousands also descended on the Florida state capitol under the banner “never again”.

Next month, a nationwide march and walkout is being planned by those who organised the Women’s March.

“Students in allies are organising the national school walkout to demand Congress pass legislation to keep us safe from gun violence at our schools, on our streets and in our homes and places of worship,” the group wrote on Facebook.