Washington: President Donald Trump invited the top congressional leaders from both parties to a White House briefing on border security on Wednesday and suggested he wants to "make a deal" to end the government shutdown.

It's the first sign of a possible opening for negotiations to break the stalemate that's had parts of the government shut for 11 days. Congressional aides said the offer was extended to the eight top leaders from both parties in the new House and Senate that convenes on Thursday and will include a briefing by Homeland Security officials. 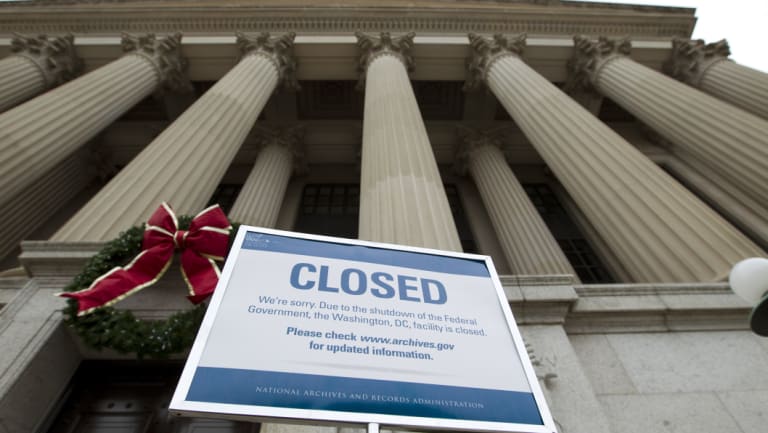 A closed sign is displayed at The National Archives entrance in Washington.Credit:AP

Trump in a tweet on Tuesday suggested he was offering an olive branch to House Democratic leader Nancy Pelosi, who's set to become House speaker later this week when her party takes control in the chamber.

"Border Security and the Wall "thing" and Shutdown is not where Nancy Pelosi wanted to start her tenure as Speaker! Let's make a deal?" the president said on Twitter.

Pelosi responded with a tweet, saying Trump "has given Democrats a great opportunity to show how we will govern responsibly & quickly pass our plan to end the irresponsible #TrumpShutdown – just the first sign of things to come in our new Democratic Majority committed to working #ForThePeople."

Trump's tweet was a shift from recent remarks that indicated he was digging in on his demand for $US5 billion ($7.1 billion) to start constructing a wall or barrier on the US Mexico border as part of a deal on spending that would reopen parts of the government.

"We have no choice, we have to have border security and a wall is part of border security," Trump said in a telephone interview with Fox News broadcast on Monday night. He said he was "not giving up" in his standoff with Pelosi and Senate Minority Leader Chuck Schumer.

Earlier on Tuesday he used Twitter to accuse Democrats of not caring about "Open Borders and all of the crime and drugs that Open Borders bring!"

Democrats have rejected Trump's request for border wall funding. When the new Congress convenes, House Democrats plan to pass two separate bills, one reopening eight departments which have been closed since December 22 and another temporarily reopening the Department of Homeland Security until February. 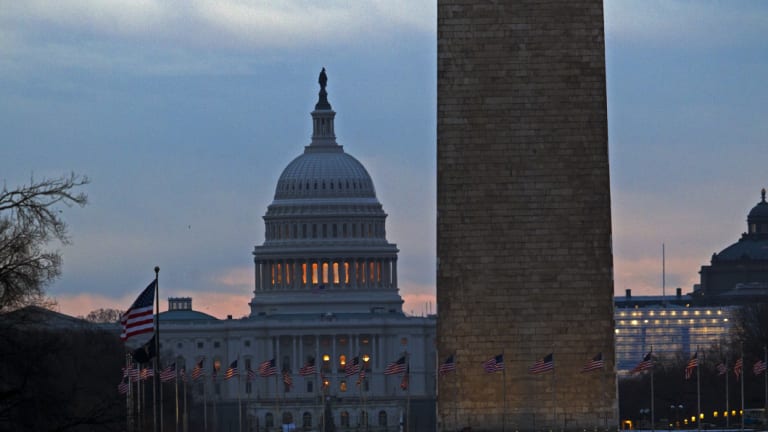 The US Capitol is seen early in the morning in Washington on Tuesday.Credit:AP

That would allow negotiations over Trump's request for border wall money to continue while the rest of the government would reopen.

A spokesman for Senate Majority Leader Mitch McConnell, Don Stewart, said on Monday that the chamber won't take up legislation that the president won't sign, leaving it up to Trump and Democrats to come to terms.

The president last month scuttled an apparent deal to fund the government through to February 8. After the Senate easily passed the measure without any money for the wall, Trump rejected it in the wake of criticism from conservative pundits, voters and lawmakers.

The shutdown affects nine of the 15 federal departments, dozens of agencies, and hundreds of thousands of workers. The effects of the standoff are becoming increasingly visible to the public.

Smithsonian Institution museums and the National Zoo in Washington will close on Wednesday for lack of funds. The Federal Communications Commission will suspend most operations on Thursday, no longer taking consumer complaints and halting review of proposed mergers such as wireless provider T-Mobile US Inc's $US26.5 billion bid for Sprint Corp. Many national parks were without most staff, resulting in some facilities being overwhelmed with rubbish.