Turkey sends police to the border to stop Greece pushing migrants back: Refugees are caught in the middle as Erdogan continues to use them to ‘blackmail’ the EU

Turkey is deploying 1,000 police officers to the border with Greece to stop migrants being pushed back in a deepening crisis at the gateway to Europe.

Turkish president Recep Tayyip Erdogan has been accused of using the refugees as a political football to ‘blackmail’ the EU in a row stemming from the flow of migrants into Turkey from Syria and beyond.

Turkish Interior Minister Suleyman Soylu announced the deployment of police today, adding that 164 migrants had been wounded by Greek authorities, in a continuing war of words between the two sides.

Athens has accused Ankara of actively promoting the flow of migrants, even using army trucks to transport them to the border and firing tear gas at Greek police on the other side. 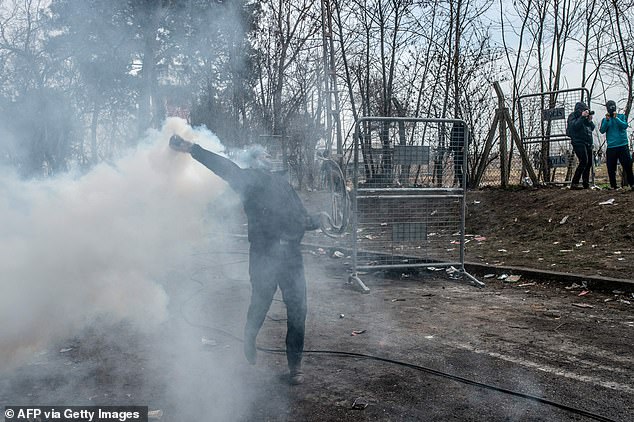 A migrant throws a gas canister back to Greek police on the buffer zone Turkey-Greece border, near Pazarkule crossing gate in Edirne, Turkey, yesterday 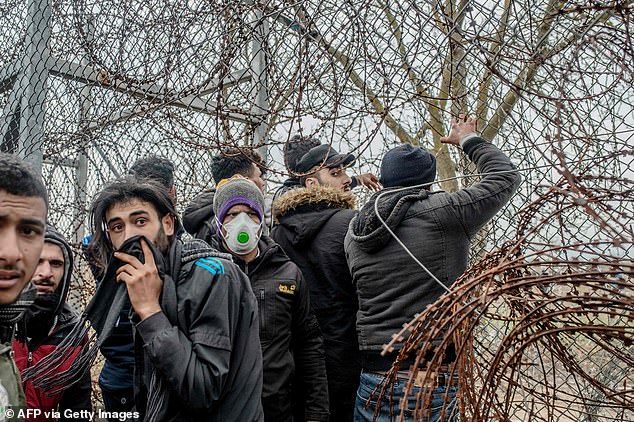 Migrants try to remove fences during the clashes with Greek police, after they tried to pass on Greek side on Wednesday

Ankara has accused Greek authorities of shooting dead and injuring migrants near the border. Athens has rejected this, calling it ‘fake news.’

It comes after Trukey chose to make good on its threat to no longer abide by a 2016 deal with the EU to halt illegal migration flows to Europe in return for billions of euros in aid.

Speaking to reporters in the northwestern border province of Edirne, Soylu said Greek police had wounded the scores of migrants trying to cross the border.

‘They wounded 164 people. They tried to push 4,900 people back to Turkey,’ he said. ‘We are deploying 1,000 special force police to the border system… to prevent the push-back.’ 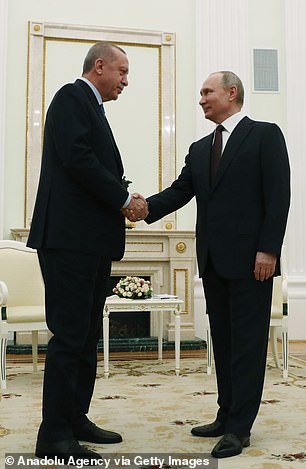 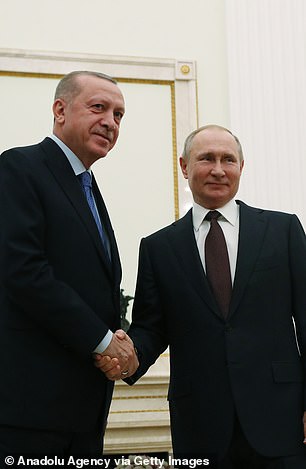 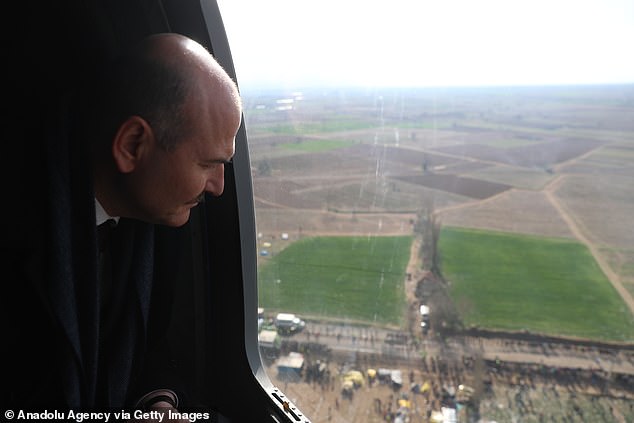 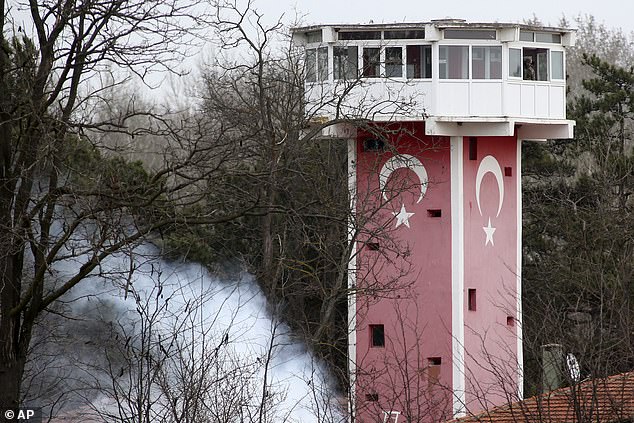 A Turkish soldier observes from a guard post during clashes between migrants and Greek police at the Greek-Turkish border in Kastanies on Wednesday, March 4

Turkey, locked in a military conflict with Moscow and Damascus in northwest Syria, hosts 3.6 million Syrian refugees and has said it cannot handle more.

It wants the EU to more forcefully back its efforts in Syria and deliver more funds to care for the nearly one million displaced there.

President Recep Tayyip Erdogan met with EU officials on Wednesday to discuss developments in Syria and the migrants flooding the European borders.

Erdogan’s spokesman later said ‘no concrete proposition’ on the migrants was made at the talks.

The situation at the Kastanies border crossing was calm on Thursday. Migrants – many of whom are from Afghanistan and Pakistan as well as Syria and other Arab nations – huddled in tents and makeshift camps on the Turkish side of the border.

Greek border guards rebuffed nearly 7,000 attempts in the last 24 hours alone, taking the total since Feb. 29 to 34,778 and the number of arrests of those who got through to 244, the Greek government sources said.

Migrants who arrived in Greece illegally after March 1 will be transferred to the northern city of Serres and deported back to their own countries, Greek Migration Minister Notis Mitarachi said late on Wednesday.

‘Our aim is to return them to their countries,’ he told the Athens News Agency.

Mitarachi also said migrants who entered Greece prior to January 1, 2019 and are living on its Aegean islands would be transferred to the mainland in the coming days.

Athens announced on March 1 that it would not accept any new asylum applications for a month following the build-up of migrants at the border. This has triggered criticism from human rights agencies. 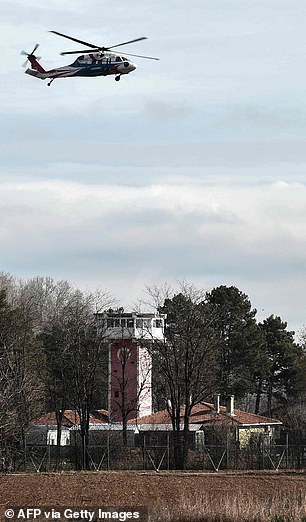 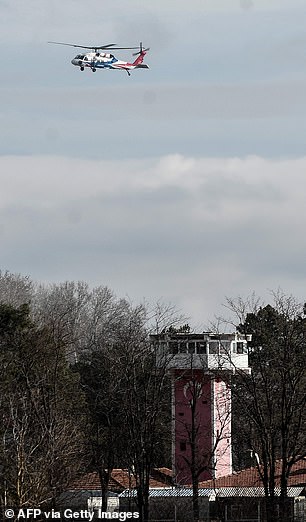 A Turkish police helicopter flies overhead in Turkey as it monitors the Greek-Turkish border near Kastanies, northern Greece on Thursday

The Aegean Sea remained choppy on Thursday and there were no further sightings of dinghies carrying migrants to Lesbos and other Greek islands from the nearby Turkish coast.

Lesbos already hosts more than 20,000 asylum seekers, many of them living in filthy conditions in overcrowded camps

Greece and the EU accuse Turkey of deliberately goading the migrants to cross the border as a way of pressuring Brussels into offering more money or supporting Ankara’s geopolitical aims in the Syrian conflict.

Turkey, which already hosts 3.6 million Syrian refugees and faces another influx from an upsurge in fighting in northwest Syria, says it cannot take in any more and complains that EU aid falls well short of what is needed for the refugees.

President Tayyip Erdogan discussed the migrant issue with senior EU officials in Ankara on Wednesday but his spokesman said the Europeans had made ‘no concrete proposition’ on how to resolve the crisis.

Ankara’s change in policy towards the migrants on its soil came after at least 33 Turkish soldiers were killed by Russian-backed Syrian government forces in an air strike in Syria.

Erdogan flew to Moscow on Thursday for talks with Russia’s President Vladimir Putin over a potential ceasefire in Syria’s Idlib, where their militaries are facing off in a war that has displaced nearly a million people in three months.

Erdogan said he hoped decisions made at his meeting with Putin would ease the situation in northwest Syria’s Idlib region, where conflict has escalated in recent weeks.

Speaking in front of cameras at the start of their meeting, Erdogan said relations between Turkey and Russia were at a peak and his goal was to strengthen those ties.