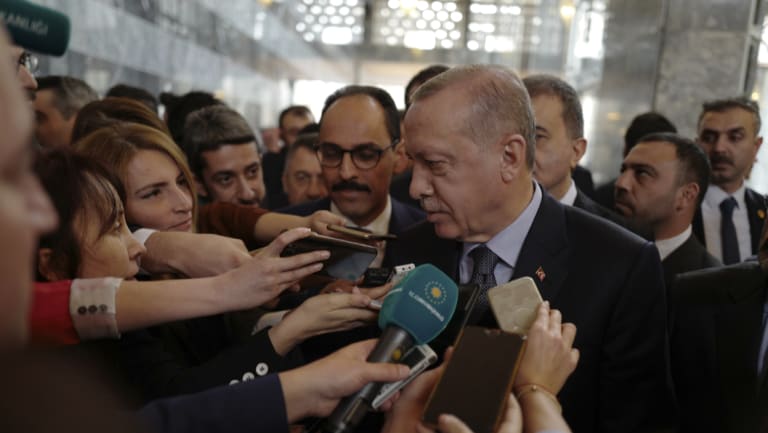 Turkish President Recep Tayyip Erdogan speaks to the media at the parliament in Ankara.Credit:AP

Turkey considers the Kurdish forces terrorists and has vowed to attack them in north-east Syria as soon as the Americans leave.

The furious response in Ankara was the latest setback for the White House's troubled effort to extricate 2000 American troops from Syria – a withdrawal Mr Trump announced suddenly last month without a detailed plan to implement it.

Bolton and Secretary of State Mike Pompeo are touring the Middle East, seeking to explain the policy and elicit support. But administration efforts at reassurance have instead raised doubts about the plan, laid bare internal disagreements and perplexed US partners.

In Jerusalem on Monday, Bolton listed pre-withdrawal "objectives" – including the final defeat of Islamic State and protection of Kurdish allies – that went well beyond Trump's simple assertion that US forces were heading home from Syria.

"The message that Bolton gave in Israel is unacceptable; it is not possible for us to swallow," Erdogan said during a televised address to legislators in his political party.

He suggested he also might ignore the Trump administration's request to delay a Turkish military operation against the US-allied Kurdish fighters. "Very soon, we will take action to neutralise terrorist organisations in Syria," Erdogan said.

The Trump administration encountered similar pushback elsewhere on Tuesday, as US allies pressed their own priorities.

In Jordan, Foreign Minister Ayman Safadi greeted Pompeo with kind words and a smile, but was unyielding in demands that the US co-ordinate any troop withdrawal from Syria with regional allies. The minister also rejected Israel's request that the US recognise Israeli sovereignty over Syrian territory that Israel occupies in the Golan Heights. 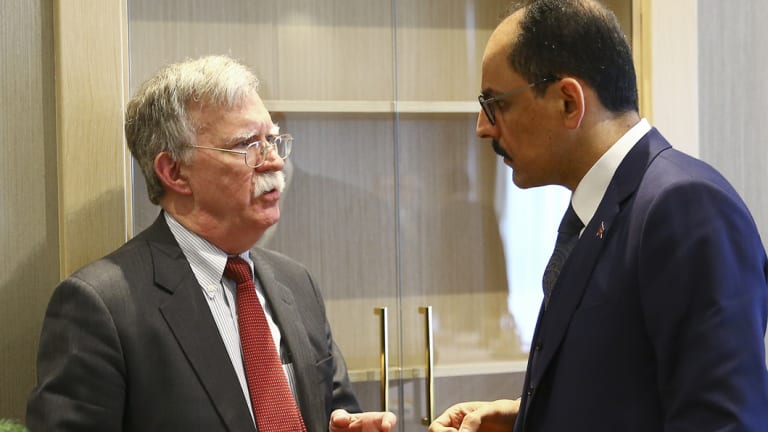 Safadi also emphasised the position of Jordan and other US allies in the Arab world that a pending American proposal for Israeli-Palestinian peace must recognise Palestinian statehood with East Jerusalem as the Palestinian capital.

Aaron Stein, the Middle East director at the Foreign Policy Research Institute in Philadelphia, said the tensions over the administration's Syria policy were largely the result of Trump's staff ignoring "the intent of the President".

"Whatever you think of Donald Trump, he has been very, very clear that he wants to withdraw from Syria. Instead of listening to that, what the national security bureaucracy is doing is putting together a plan that depends on a forever US presence. Everyone is scrambling to reinterpret the president's message."

As a result, the US deliberations over Syria, which would normally occur behind closed doors, are "literally happening in front of the entire world," Stein said.

Bolton presented Turkish presidential spokesman Ibrahim Kalin with a document restating Trump's intention to withdraw US forces but also insisting on protection for Kurdish fighters, said according to a person briefed by a senior administration official who attended the session, speaking on the condition of anonymity.

According to US talking points, American troops and their allies in Syria would continue attacks against remaining Islamic State forces during an "orderly" US departure period. Though orders have been given to the US military to begin preparing for withdrawal, troops will carry out operations against the militant group as they leave. To prevent an Islamic State resurgence, the US will retain unspecified capabilities on the ground for ongoing operations.

Bolton's delegation stressed that Washington was seeking a negotiated solution to Turkey's concerns and would cooperate with Ankara on deconflicting airspace over north-east Syria.

During the discussions, Bolton stressed US opposition to any Turkish mistreatment of the Syrian Democratic Forces, which have fought alongside the United States against the Islamic State. But Kalin did not budge from Turkey's insistence that the bulk of those fighters, who are members of the Syrian Kurdish Peoples Protection Units, or YPG, are allied with Kurdish separatists in Turkey. He said that no offensive action would be taken in Syria while US forces remained but that Turkey was fully within its rights to attack the Kurdish "terrorists''.

Bolton and Pompeo have both insisted on protection for all of the SDF, whose estimated 60,000 fighters include Syrian Arabs as well as Kurds. But this concern has not been made a formal condition of the pullout, according to one person familiar with the situation, who spoke on the condition of anonymity. This person said that "there will definitely be a fight" between Turkey and the Kurdish forces once the Americans leave Syria.