Never mind who wins, which COURT SKETCH came out on top? Digital doodle of duelling barristers is latest image from Coleen Rooney and Rebekah Vardy’s £3M Wagatha Christie war to take Twitter by storm… but which one is YOUR favourite?

The nation has been gripped by the twists and turns of the Wagatha Christie libel trial between Rebekah Vardy and Coleen Rooney over the past week.

From shocking revelations to catty exchanges and floods of tears, the battle between the two women has dominated the headlines and taken over social media.

Yet one of the most popular talking points of the trial has nothing to do with what the two women have said – but instead how they have been depicted by the court sketch artists covering proceedings.

From comparisons to potatoes, boxing stars and art from the 1400s, social media has been awash with hilarious commentary on the sketches.

Social media users have also been tickled by the court sketches which have emerged from the trial, some suggesting that Rebekah should ‘change target mid-case’ and others saying her and Coleen should ‘both be suing the court artist’.

Today saw the final day of the Wagatha Christie libel trial brought by Mrs Vardy to ‘establish her innocence and vindicate her reputation’ after Mrs Rooney accused her personally leaking false stories to The Sun in October 2019.

Making his closing arguments on the final day of the trial, Hugh Tomlinson QC, for Mrs Vardy, said she has suffered ‘very serious harm to her reputation’ as a result of Mrs Rooney’s post.

He also said that Mrs Rooney has ‘failed to produce any evidence’ that Mrs Vardy had ‘regularly and frequently abused her status as a trusted follower’ of her private Instagram account by passing on information from it to The Sun newspaper.

Meanwhile, Mrs Rooney’s barrister declared Mrs Vardy ‘lied under oath’, gave ‘implausible’ evidence that ‘cannot be trusted’ and deleted incriminating WhatsApp messages in a fatally flawed libel action she brought against her rival Coleen that should never have made it to the High Court.

The scene was depicted today in court sketches that showed the two barristers earlier today – with David Sherbourne QC standing to make his closing statement to the court, as Hugh Tomlinson QC looked on. 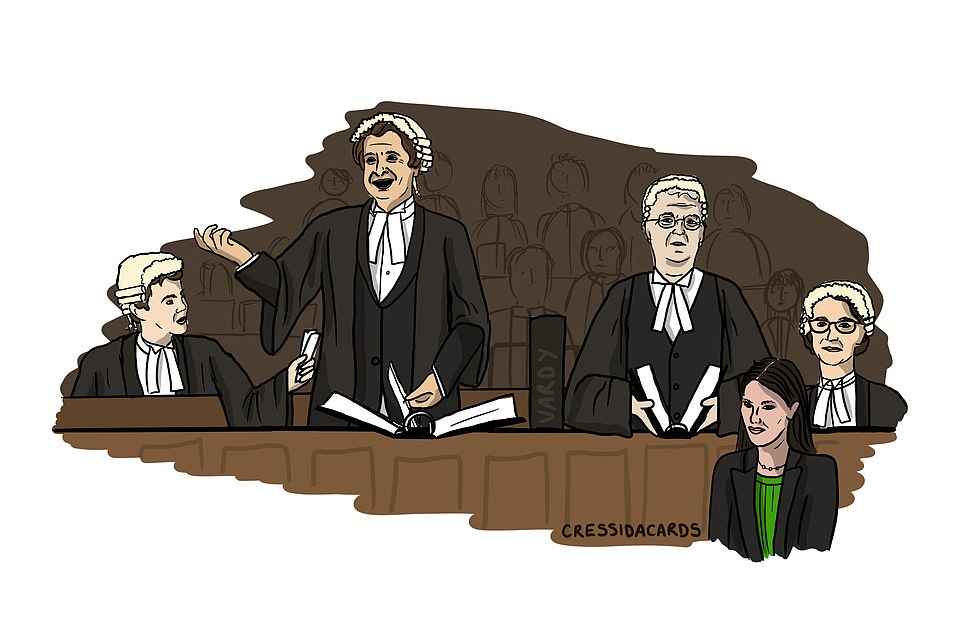 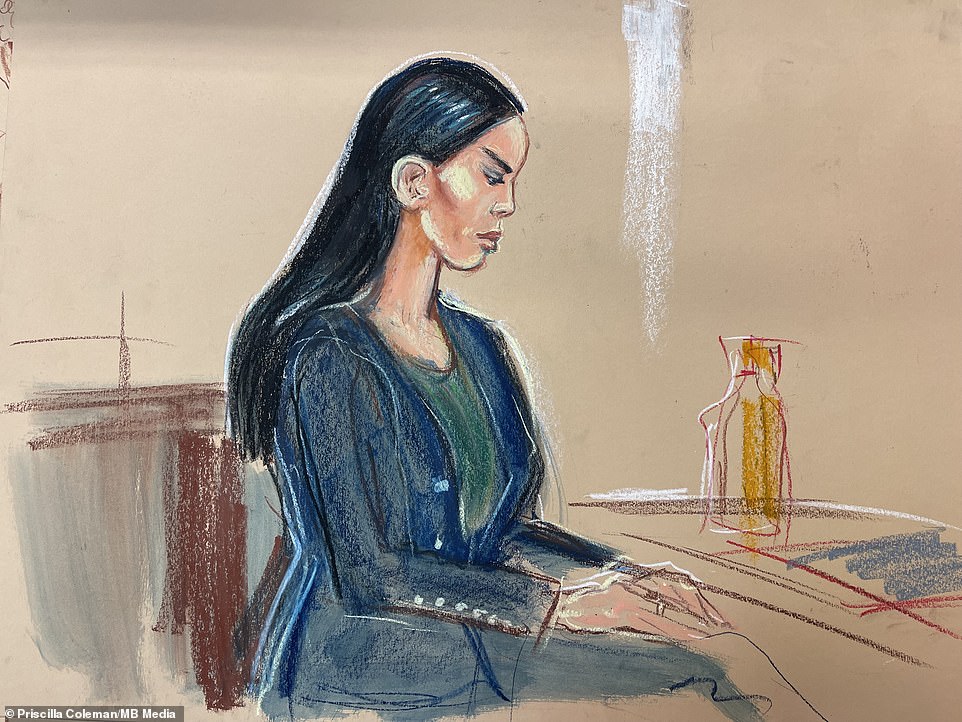 Rebekah Vardy sketched in the High Court today where she was accused of lying and giving ‘implausible’ evidence. She left court today for an hour without explanation, returning with some Lucozade, her laptop and her lawyer 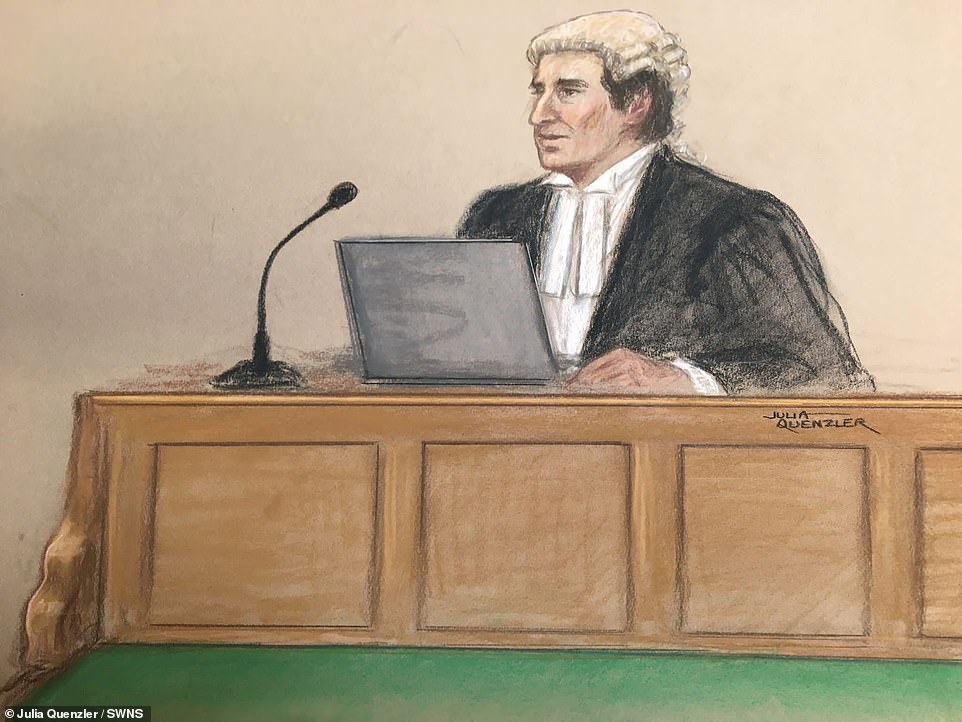 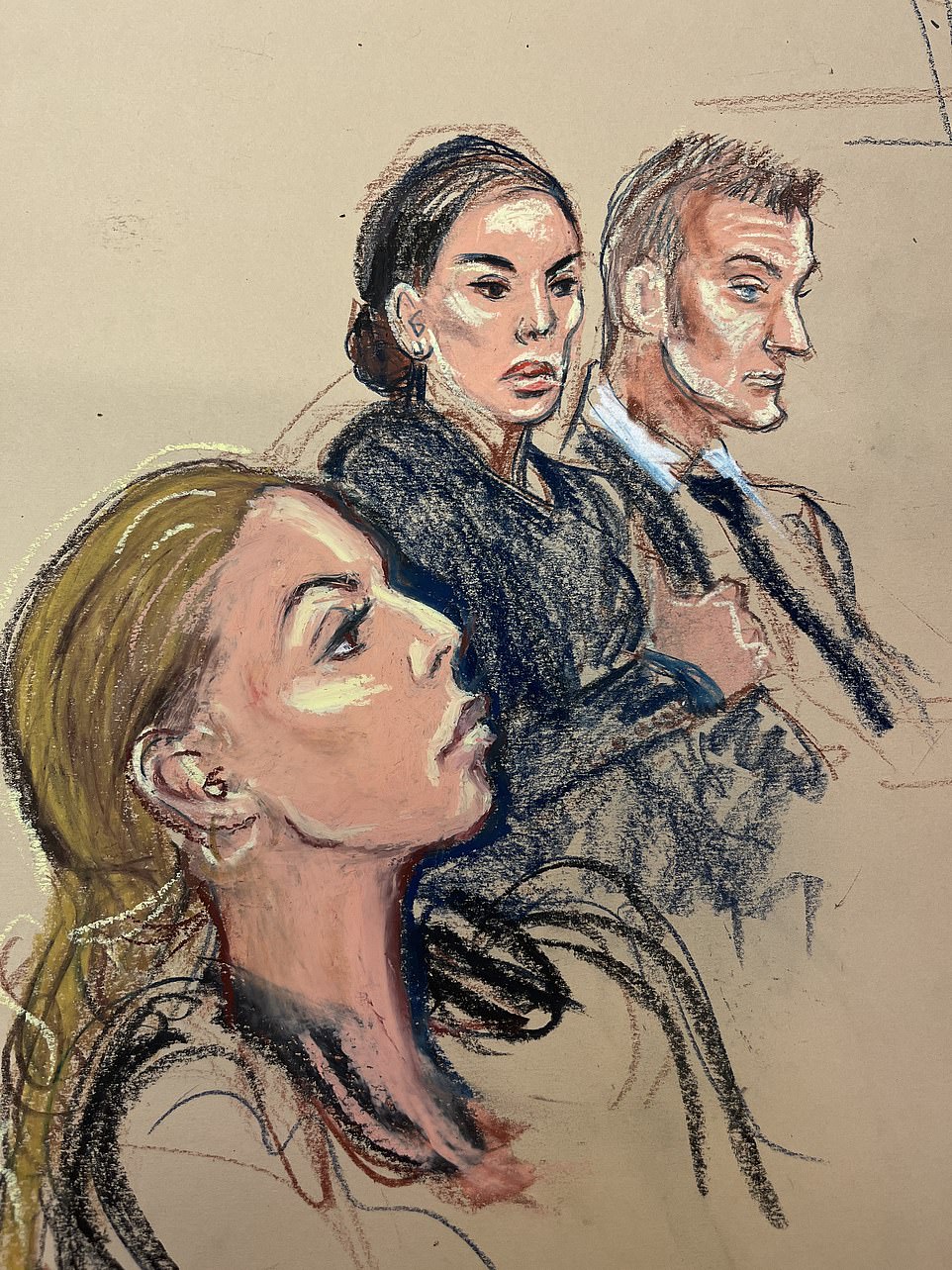 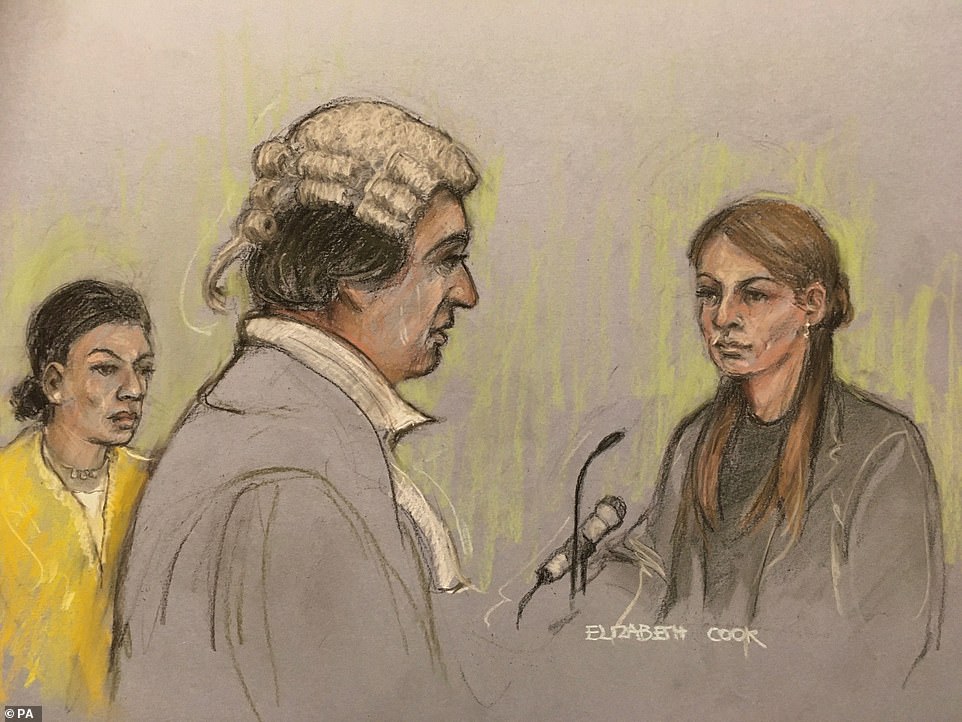 Court artist sketch by Elizabeth Cook of Coleen Rooney, watched by Rebekah Vardy, being re examined by her own barrister, David Sherborne, as she gives evidence at the Royal Courts Of Justice in London 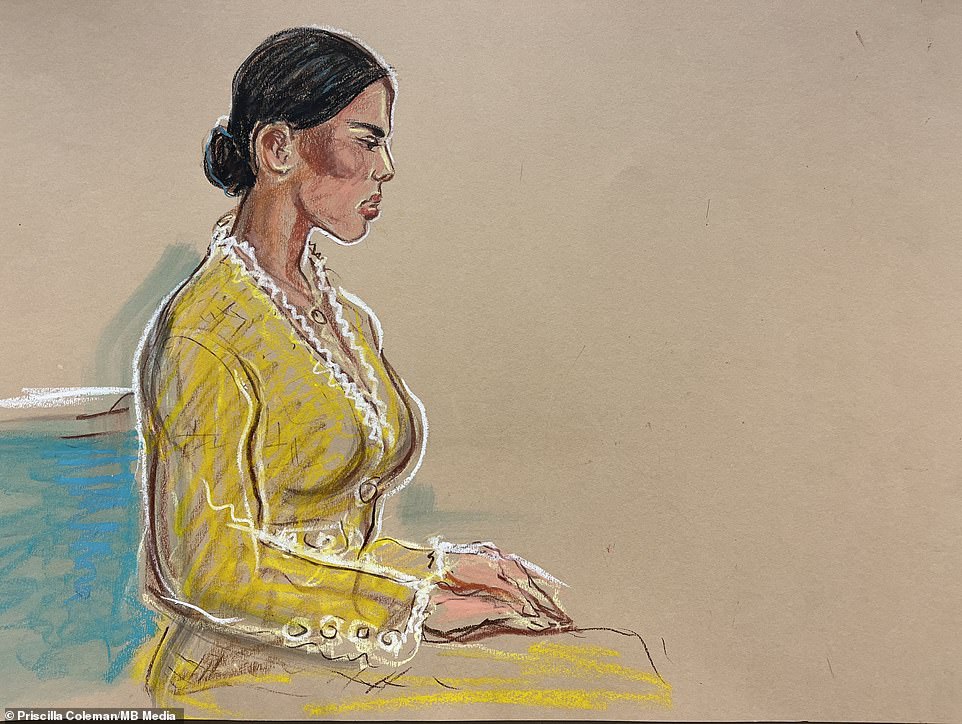 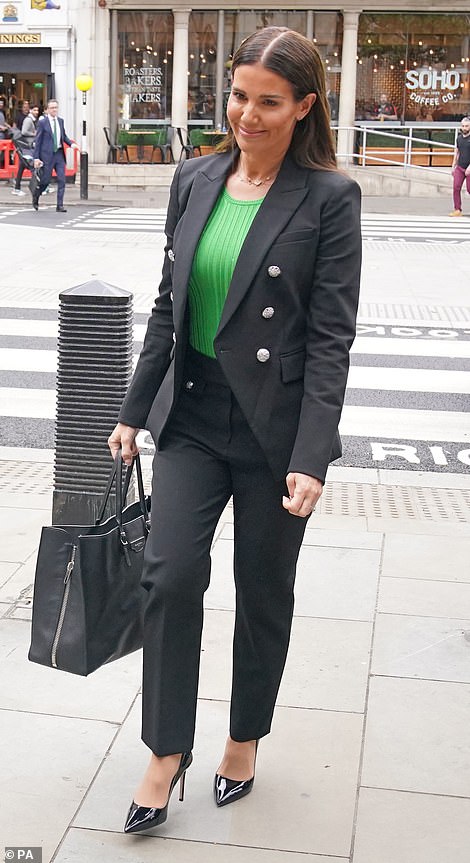 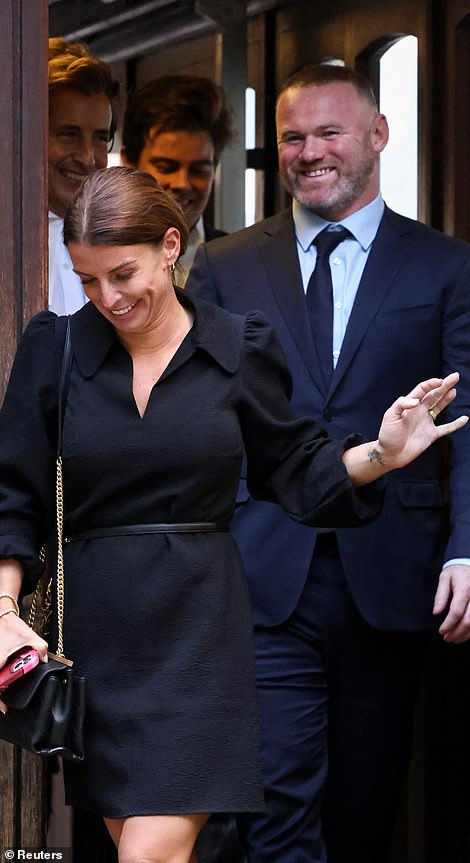 Flanked by security, Rebekah Vardy, wife of Jamie Vardy, arrives at the Royal Courts of Justice today, on the final day of her Wagatha Christie libel trial. Pictured right: The Rooneys leave court as legal experts suggested the case was going their way on Wednesday before arriving at Manchester Airport on Thursday morning as the head out to Dubai with their children and her parents for a holiday on the final day of the libel trial

It comes as esteemed court sketch artist Priscilla Coleman – who has been drawing scenes for over 20 years – told MailOnline that it is a ‘weird thing’ she does and it’s ‘getting weirder every day’.

The artist explained how she isn’t allowed to make sketches while sitting in court and has to pick the best moment when to leave to draw.

She said: ‘I’m like a human camera that has flaws. It comes out in my material. I’m not a snapper, I can take notes but if I try to do a drawing in a court room I’d be arrested and fined.

‘I sometimes wait for a moment for paper to be passed around. That’s a good time to go out. You have to go with the flow.

Priscilla also explained how famous people can look very different in person and highlighted the difficulties of covering the Wagatha Christie trial as a sketch artist.

She wrote: ‘People in court can be very emotional. Vardy is usually photographed when she’s confident and bubbly, but in court on Wednesday she was like a kid getting in trouble with her teacher.

She added: ‘It’s really popular so at the start it was pretty tough to get a seat in the court. I’ve got a great position now, really close. I can almost touch Wayne Rooney if I reach out.

‘My drawings are getting better every day the better I get to know them.

Priscilla said she was aware of some of the criticism of sketch artists covering the trial.

She admitted some court artists can ‘massacre faces’ but stressed trolls ‘just want attention’ and every drawing could be ‘picked on’.

Priscilla said: ‘I have a troll up north and she has a nice looking face and she works with the NHS. Her Twitter is full of people telling her she’s so sweet and nice. But then she’s trolling sketch artists. The trolls want attention. They love attention.

‘You can probably pick on every drawing. I went to see a Rembrandt drawing and my friend was picking on Rembrandt.’

It comes following the past days’ hilarity at the drawings, which saw Wayne Rooney being compared to a ‘potato’ and Coleen, to ‘Norman Bates’ mother’ on social media.

One user wrote: ‘Never mind suing Rebekah Vardy, I’d be suing the court artist if I was our Coleen. Terrible business this.’

Another said: ‘Coleen Rooney & Rebekah Vardy should both be suing the court artist.’

‘If I was Rebekah Vardy I’d be asking if I could change my target mid-case from Coleen Rooney to these court artists. Just superb,’ someone added.

Twitter user, David Jones, quipped: ‘I hope someone is keeping a collection of all these Wagatha court sketches in which everyone involved looks like a completely different person in every picture, but never themselves in real life.’

Pointing out a comparison, another user commented: ‘Who on earth is doing the court’s drawings? This is meant to be #coleenrooney It looks absolutely nothing like her.

But the rival WAGs haven’t been the only ones whose depictions have faced scrutiny.

Last week social media users were also left in stitches by the Wagatha Christie court sketches – with some saying the artists have made Wayne Rooney look like a ‘potato’.

One fan, commenting on the court sketch of Wayne, said it had made him look like a certain heavyweight boxer. They wrote: ‘Tyson Fury will be furious.’

Another said: ‘That’s taken artistic liberty too the extreme.’ And one Twitter user simply described the person in the snap in one word: ‘Potato!’

Commenters on Twitter have also likened one portrait of the Rooneys to art styles from the 1400s.

Mike Peters said: ‘Thanks to the court artist for allowing us to imagine what it would look like if the Rooneys were at Agincourt.’

He was referencing a battle between the English and French in 1415, which has been heavily depicted through paintings. 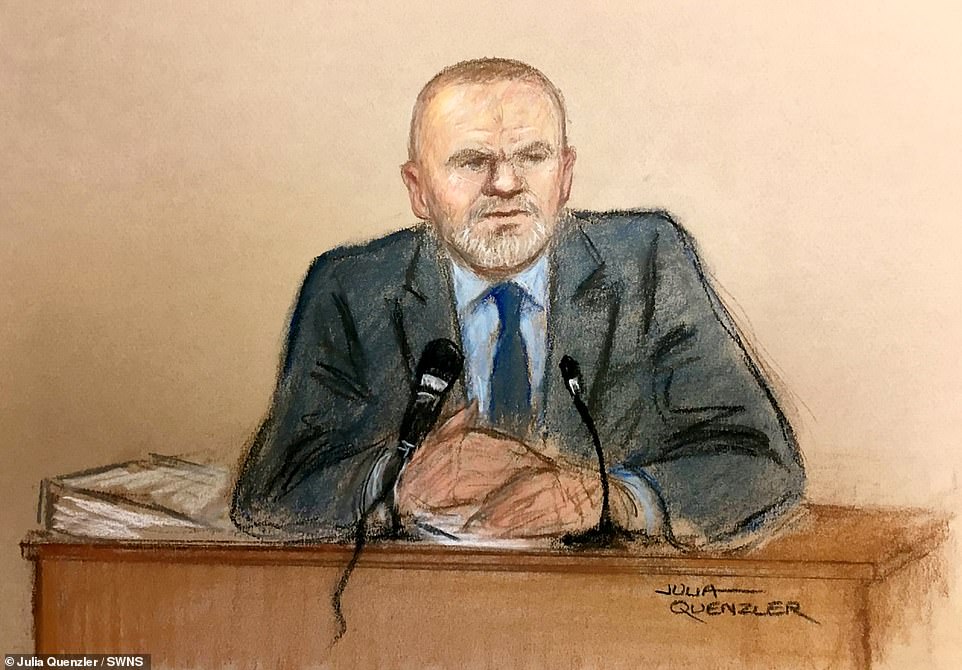 Artist impression of Wayne Rooney at the Royal Courts of Justice in London on May 17. The ex-Manchester United star was asked by his then England manager Roy Hodgson to ask teammate Jamie Vardy to get his wife to ‘calm down’, the High Court heard 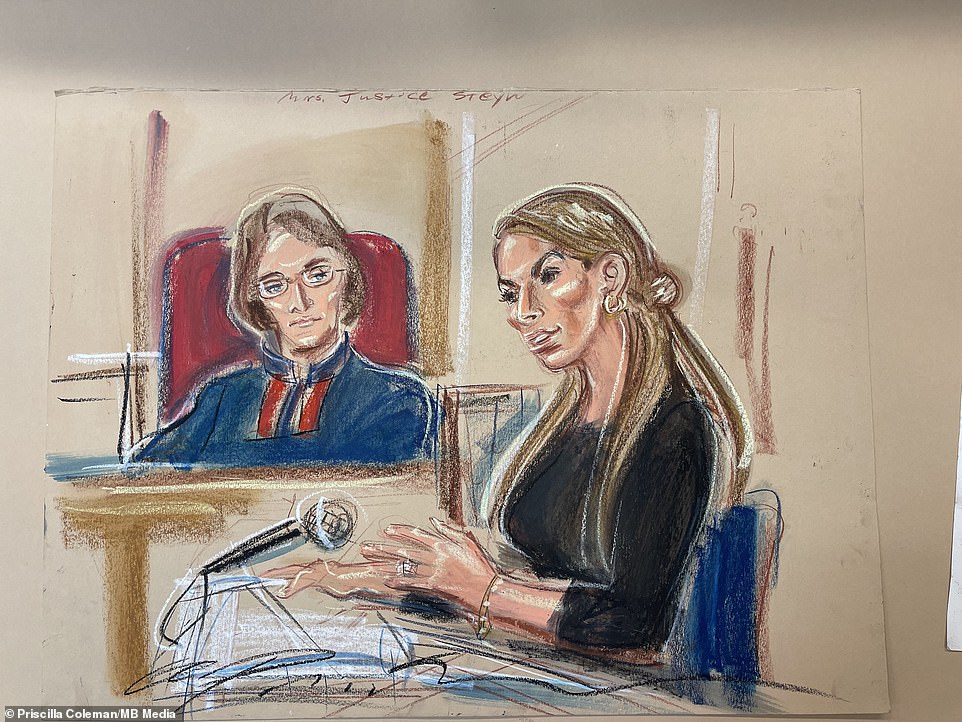 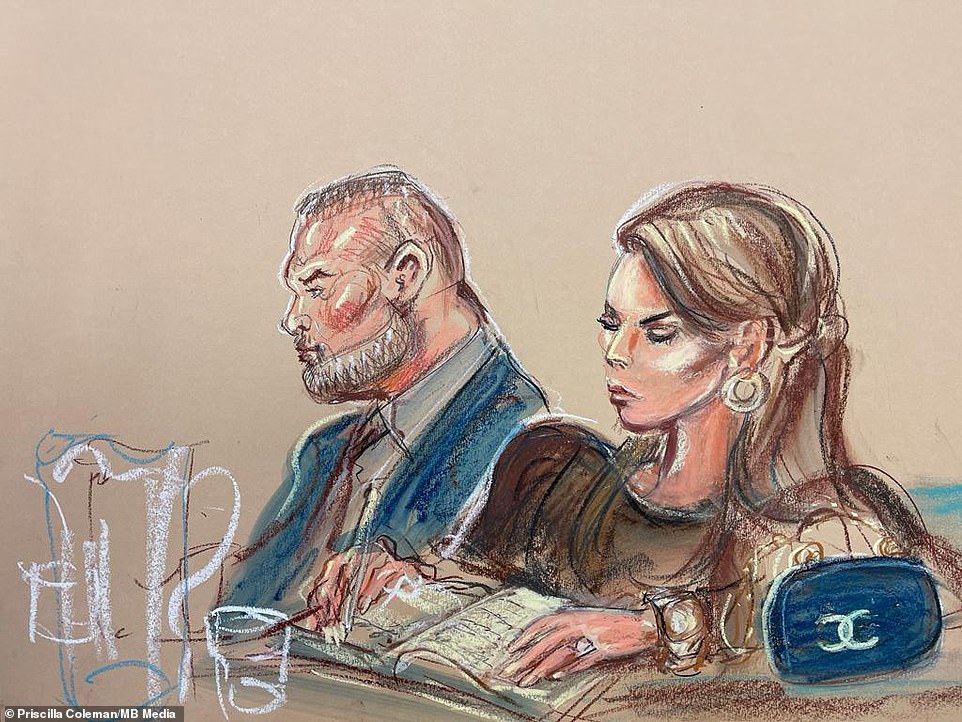 Pictured: Coleen Rooney is seen sitting next to her husband Wayne Rooney, taking notes while Rebekah Vardy on stand giving evidence in a libel case on May 12 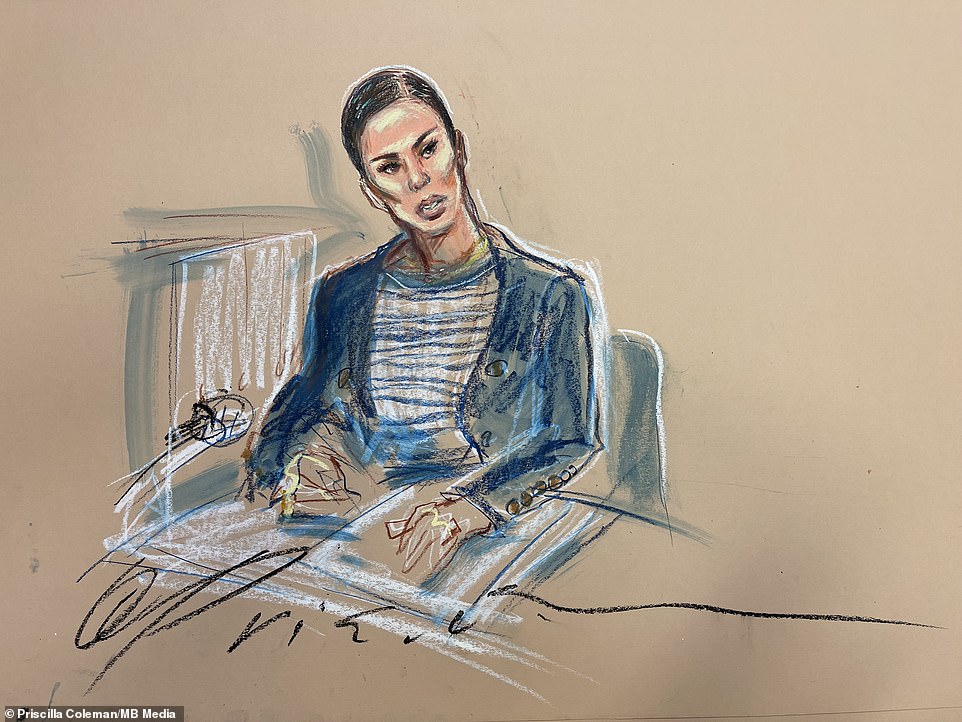 LAST THURSDAY: A sketch by court artist Priscilla Coleman of Rebekah Vardy giving evidence on May 12 after taking the stand 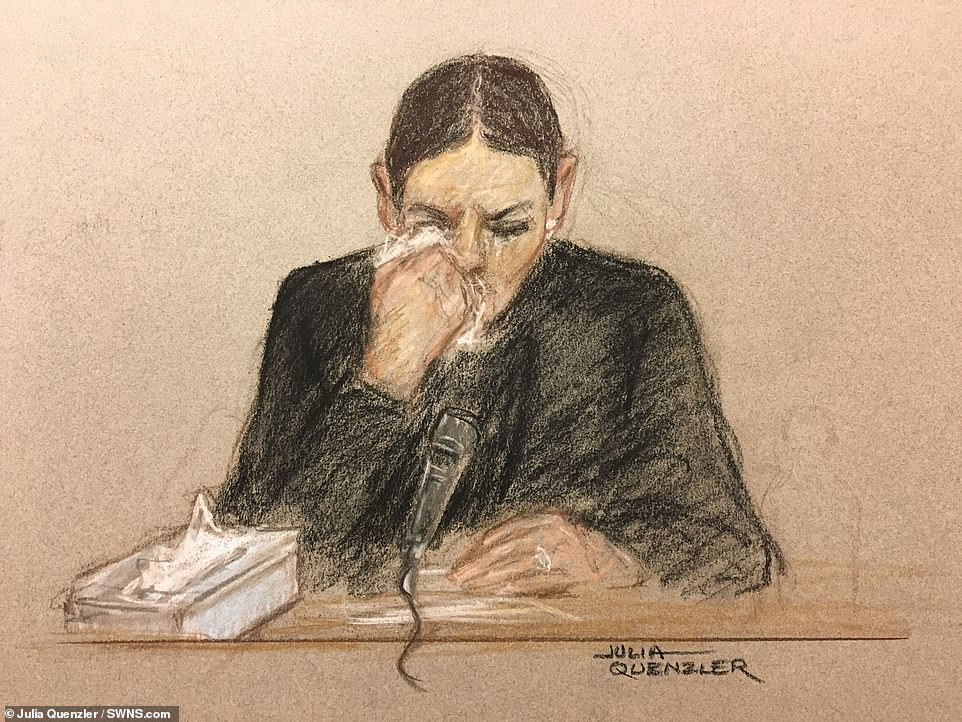 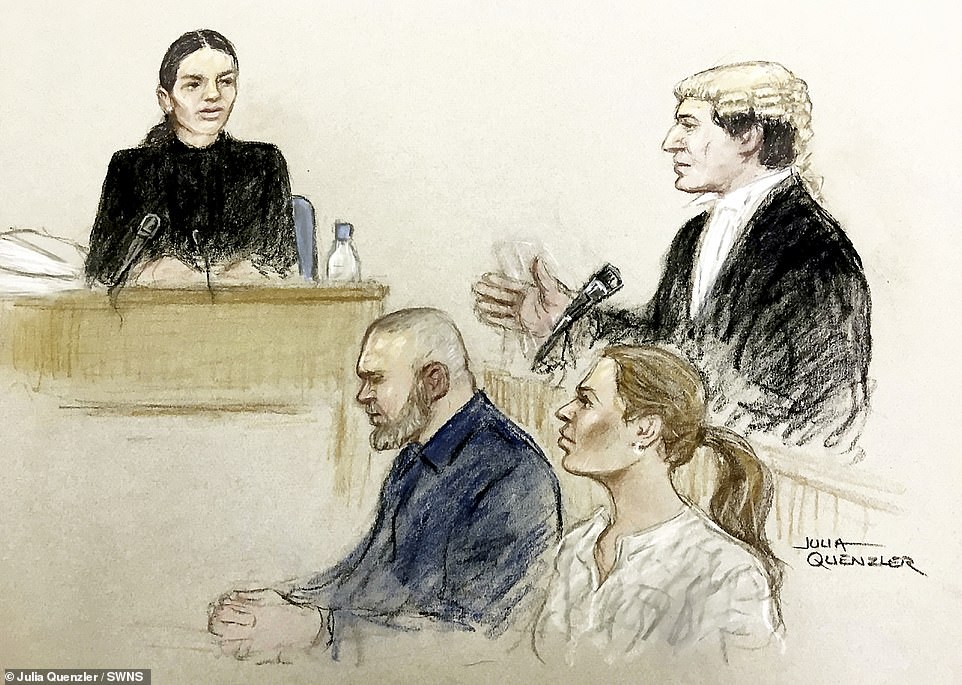 Other sketches from the trial have also been picked up on social media, with people suggesting that both Rebekah and Wayne Rooney ‘aren’t happy’ with the way they have been depicted.

Charlotte Johnson said on Twitter: ‘I keep seeing random things on Twitter about Rebekah Vardy and Coleen Rooney, not even interested in this nonsense, but I applaud the sketch artist in court for getting Michael Jackson pretty much bang on.’

Others focused on the portrayal of Wayne Rooney, with one likening his image to American professional wrestler, Brock Lesnar.

Another compared an image of the football manager, 36, to the restoration of a Spanish fresco of Jesus, now referred to as ‘Monkey Christ’, by Cecilia Jimenez.

It comes as the sensational trial today saw Mr Sherborne claim he had proved that Rebekah Vardy had ‘regularly and frequently’ leaked information to The Sun about his client and others in her sphere.

He said: ‘Just because she [Vardy] was not the one who pulled the trigger on occasion, it does not mean she was not responsible’.

Mr Sherborne also said the court ‘can and should conclude’ that the loss of WhatsApp messages between Rebekah Vardy and her publicist Caroline Watt was ‘the result of deliberate deletion’. ‘The loss of documents is substantial in this case,’ he said. 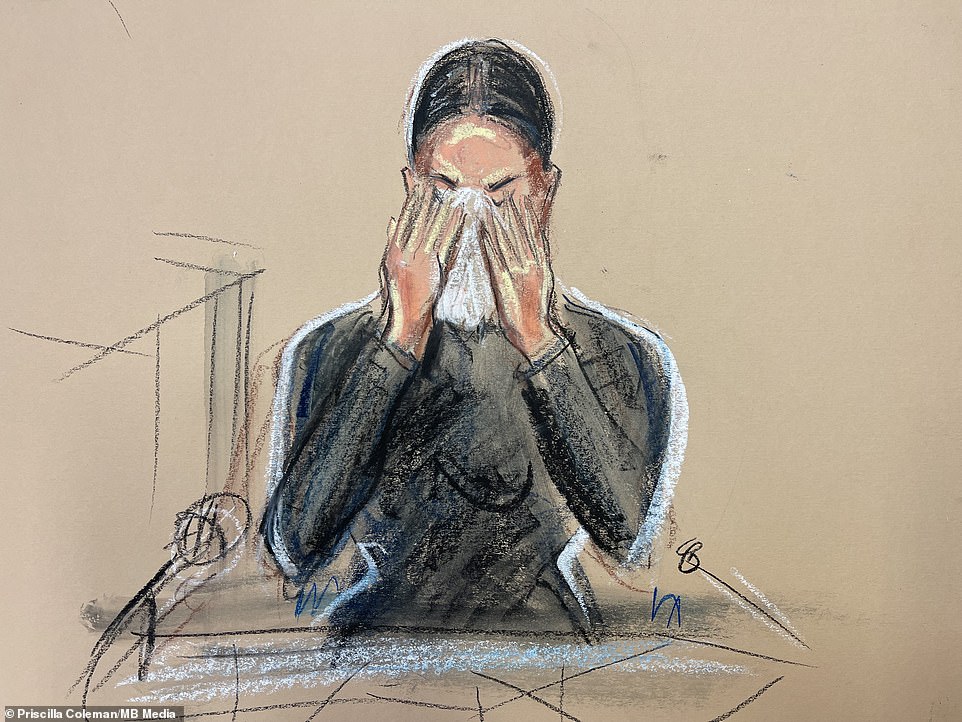 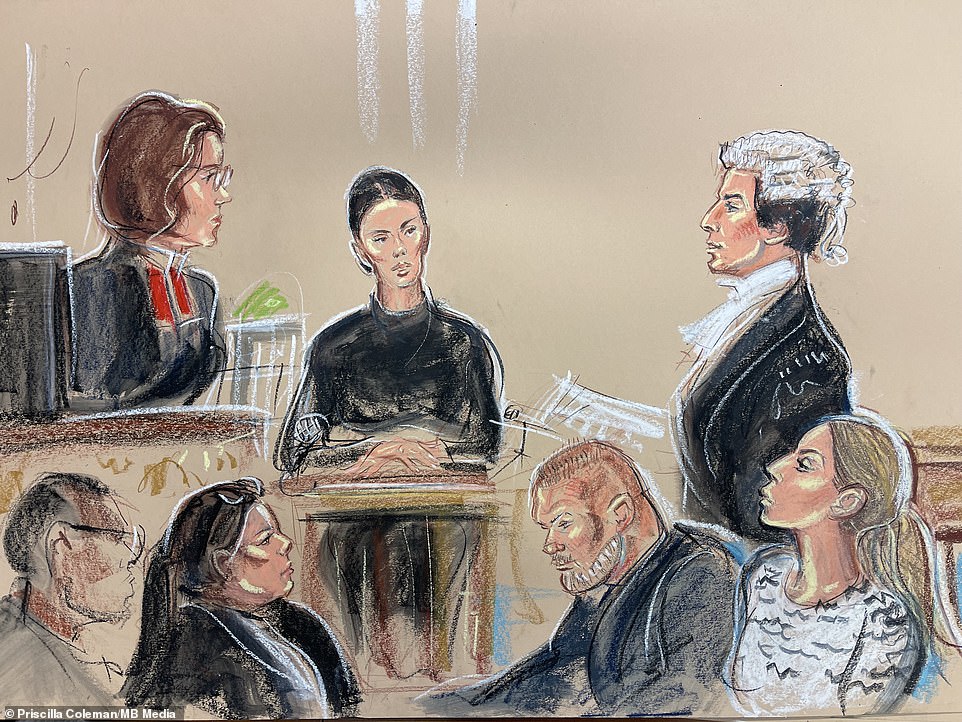 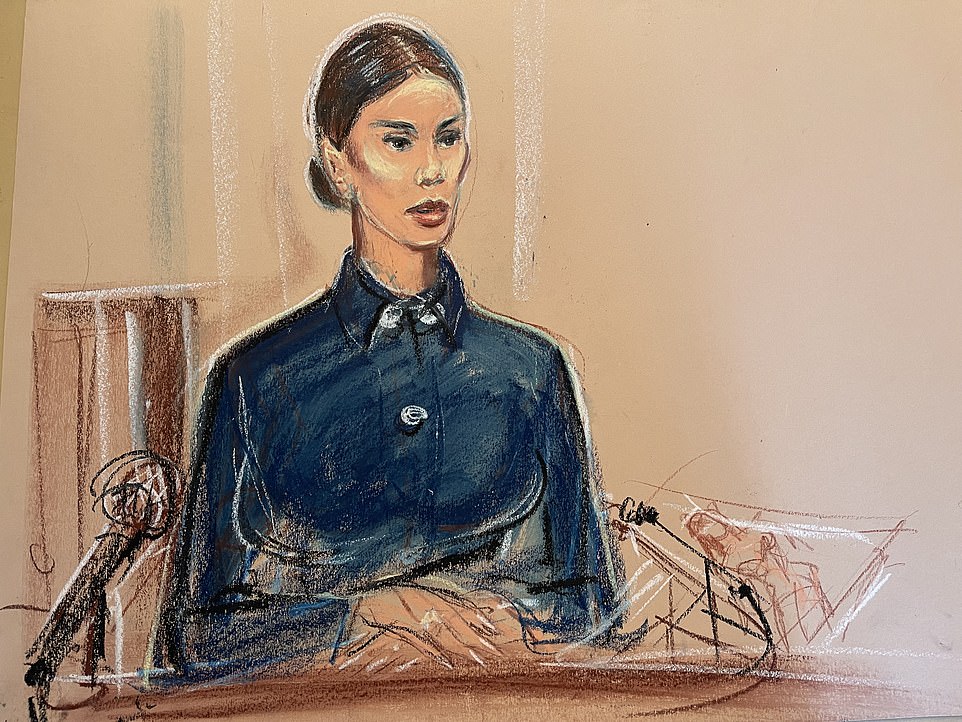 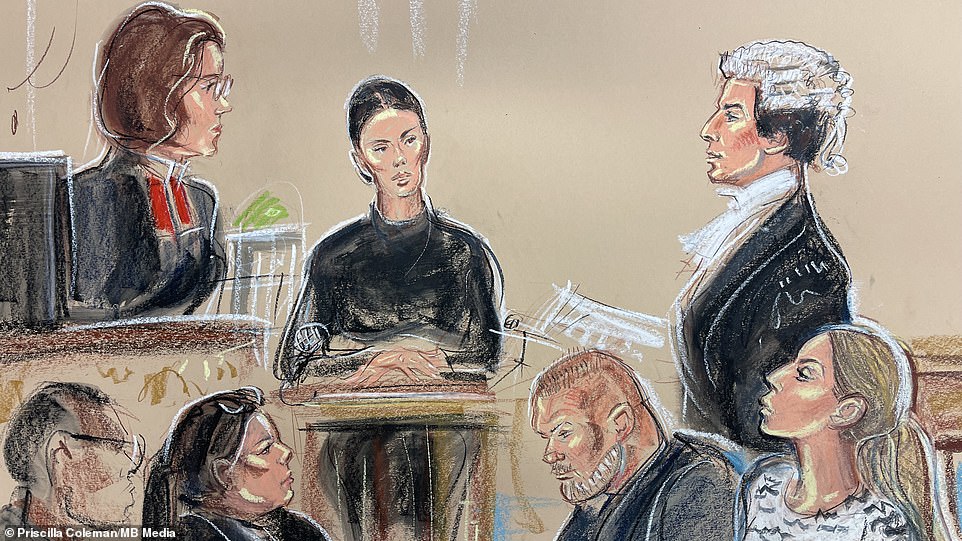 Mr Sherborne said these were deliberately deleted – despite claims from Vardy they were lost accidentally.

He described the case as a ‘deliberate trail of destruction’ and a ‘series of improbable events’.

Vardy’s suggestion that a ‘new phone’ was responsible for the loss of messages is ‘wholly unsupported by the evidence’ said Mr Sherborne, with no evidence a new device was used to log into Instagram.

‘If there was no new device, and the experts are agreed that there was not, then the only explanation is manual deletion,’ he added.

He said Rebekah deleted the messages to ‘cover up the collusion’ between her and Ms Watts, claiming they had been ‘corrupted’ during the exporting process.

‘She says the WhatsApp export was carried out on an old laptop which stopped working between October and December 2019 and no longer functions,’ says the lawyer.

When Coleen’s legal team asked to forensically examine the laptop they were told it had been ‘disposed of’ by Rebekah because it ‘had been damaged beyond repair’. 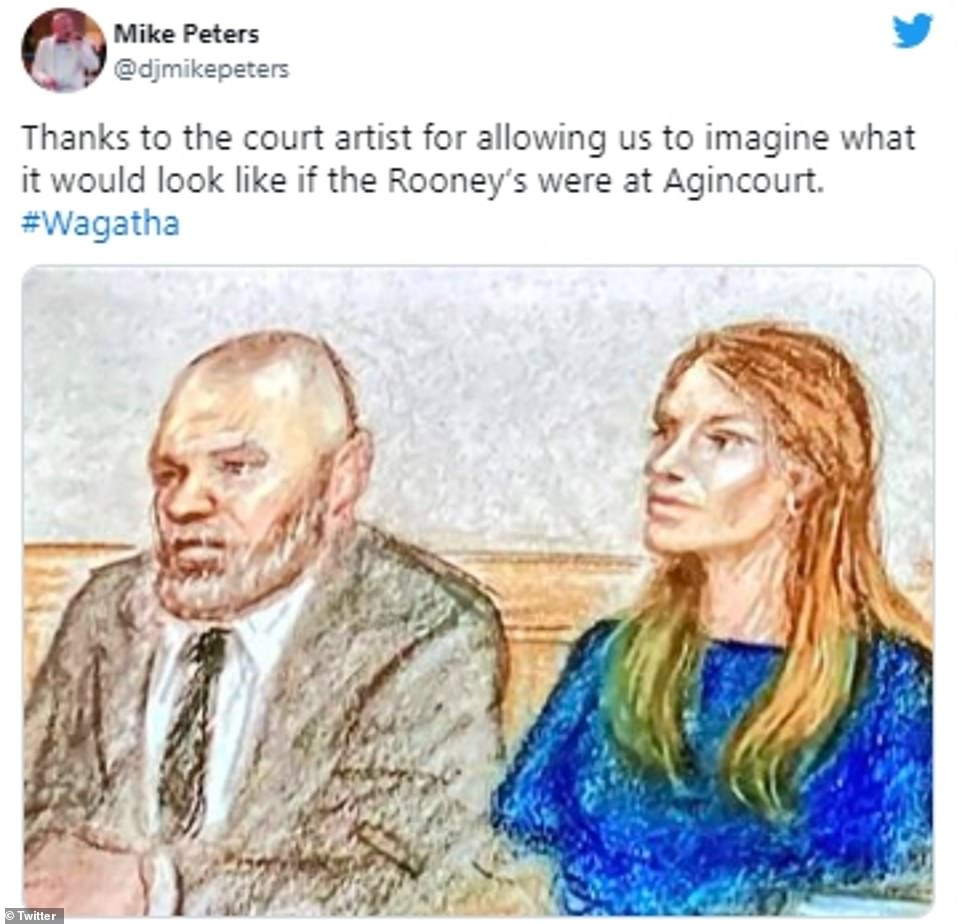 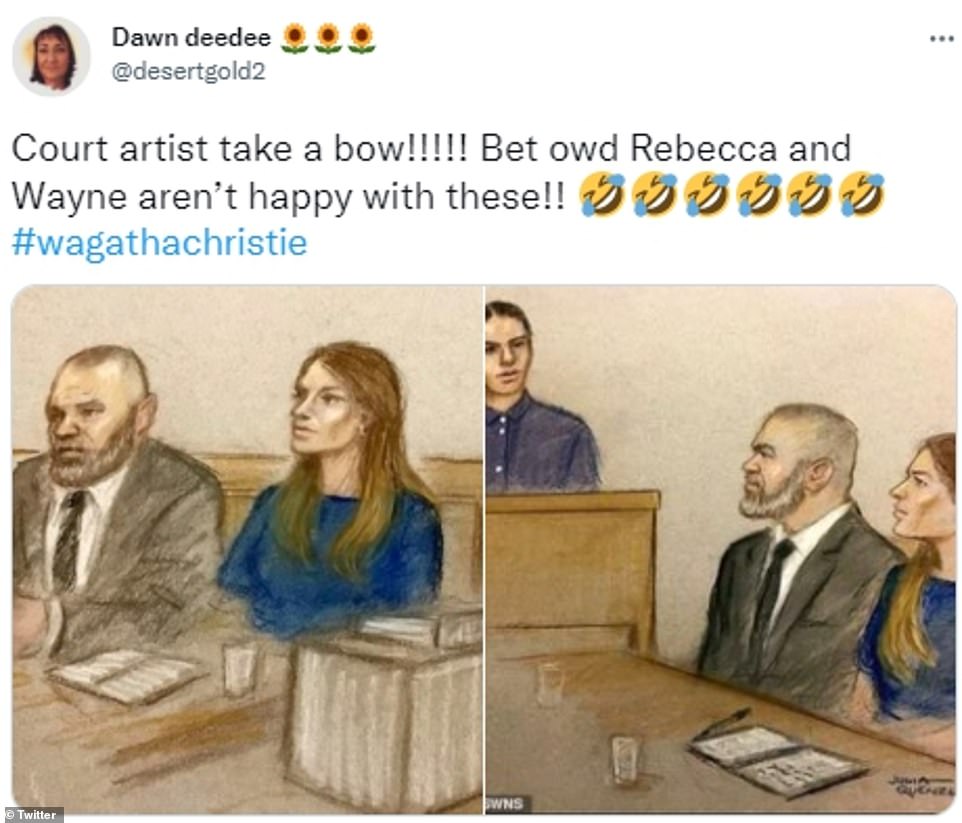 ‘No explanation has been given for this deliberate destruction of evidence’, he said.

‘She could not recall when she actually destroyed the laptop but accepted it was after she had been told to preserve everything.’

Then, the fact Ms Watt’s phone was ‘dropped in the north sea’ during a trip to Scotland is ‘fishy enough’, Mr Sherborne said.

‘If Ms Watt’s phone had not been destroyed then the claimant’s messages (including all media files) would have been accessible. It was therefore necessary for both to be destroyed to properly cover up any wrongdoing and conceal discovery.  RIP Ms Watts phone’.

He then pointed to the fact that the court had also not heard evidence from agent Caroline Watt who he alleged ‘clearly had repeated contact with these journalists’. Ms Watt had a ‘hand-in-glove’ relationship with Mrs Vardy, Mr Sherborne claimed, adding: ‘No Caroline Watt is like Hamlet without the Prince of Denmark’.