In the poorest countries, about half of facilities do not have basic water services- water delivered by pipes or boreholes that protect it from faeces. 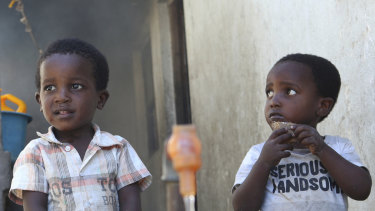 Children wait to fill up a bucket in Mozambique, where millions of people have been affected by Cyclone Idai.Credit:AP

The World Health Organisation (WHO) and UN Children's Fund (UNICEF) said more than one million deaths a year were associated with unclean births and 15 per cent of all patients attending a health facility developed infections.

Worldwide, nearly 900 million people have no water at all at their local health facility or have to use unprotected wells or springs.

One of the development goals agreed by world leaders in 2015 was for all to have access to safe water and sanitation by 2030.

"Sick people shed a lot more pathogens in their faeces, and without toilets, staff, patients – this includes mothers and babies – are at a much greater risk of diseases caused and spread through human waste."

The agencies said good water and sanitation services were crucial to reducing the spread of antimicrobial resistance, one of the greatest global health threats.

The data showed that West Africa had some of the lowest rates of access to water and sanitation.

WaterAid said this was alarming given a lack of clean water and good hygiene had contributed to the spread of the world's worst Ebola outbreak in the region, which killed more than 11,300 people between 2013 and 2016.