The "extremely dangerous" object darted above fuel tanks at the Air Force Base before being chased by customs and border officials, says the FBI. 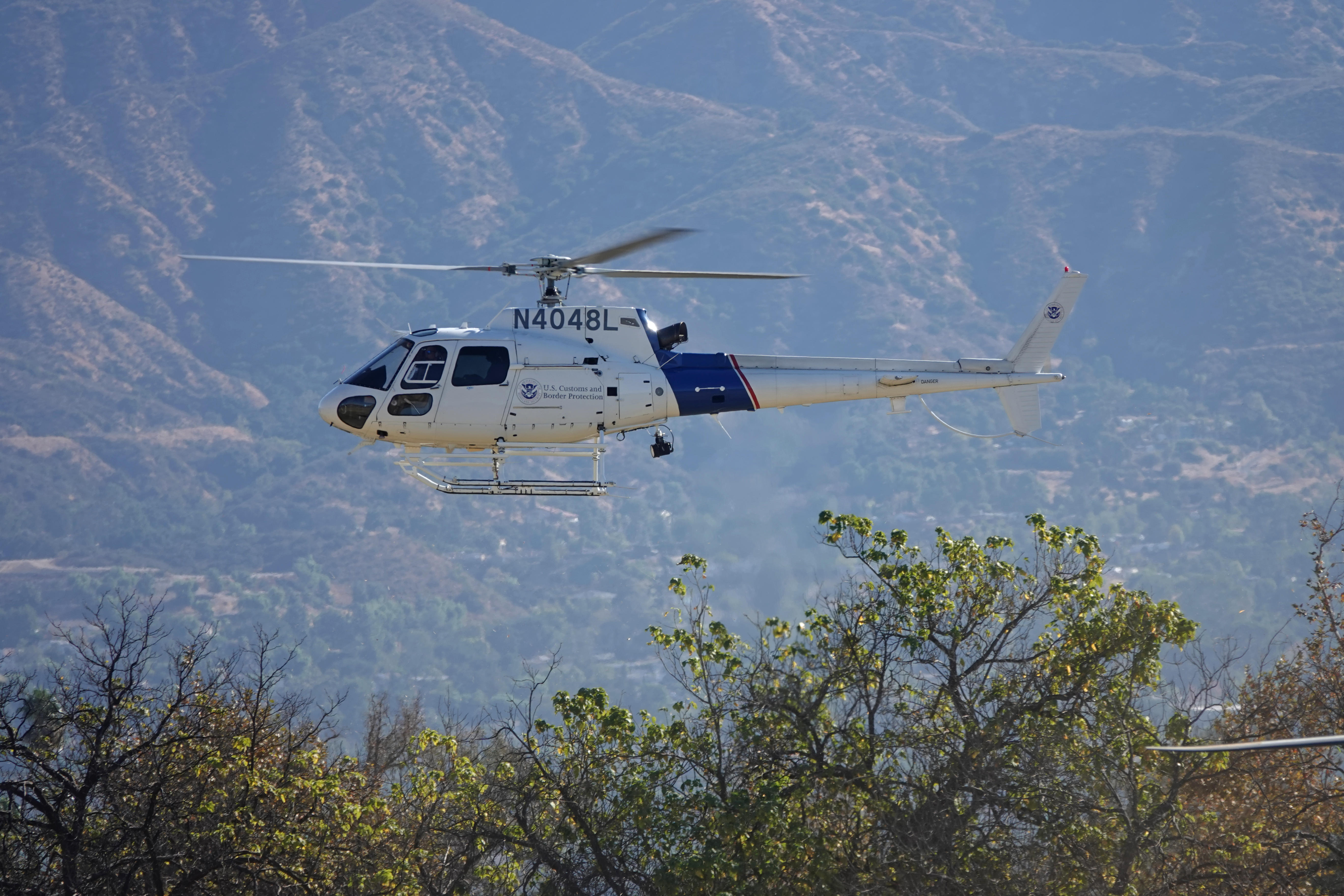 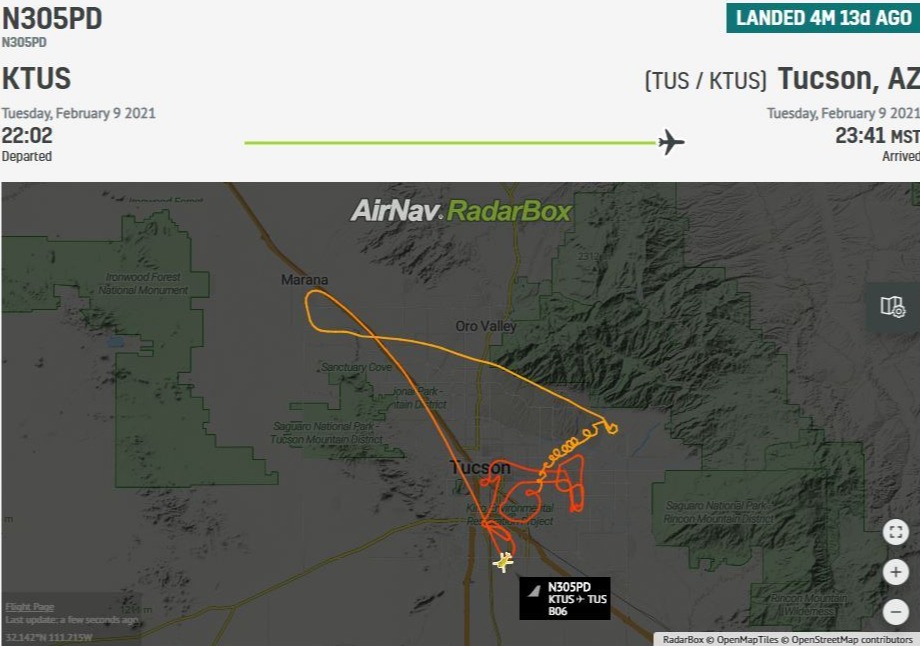 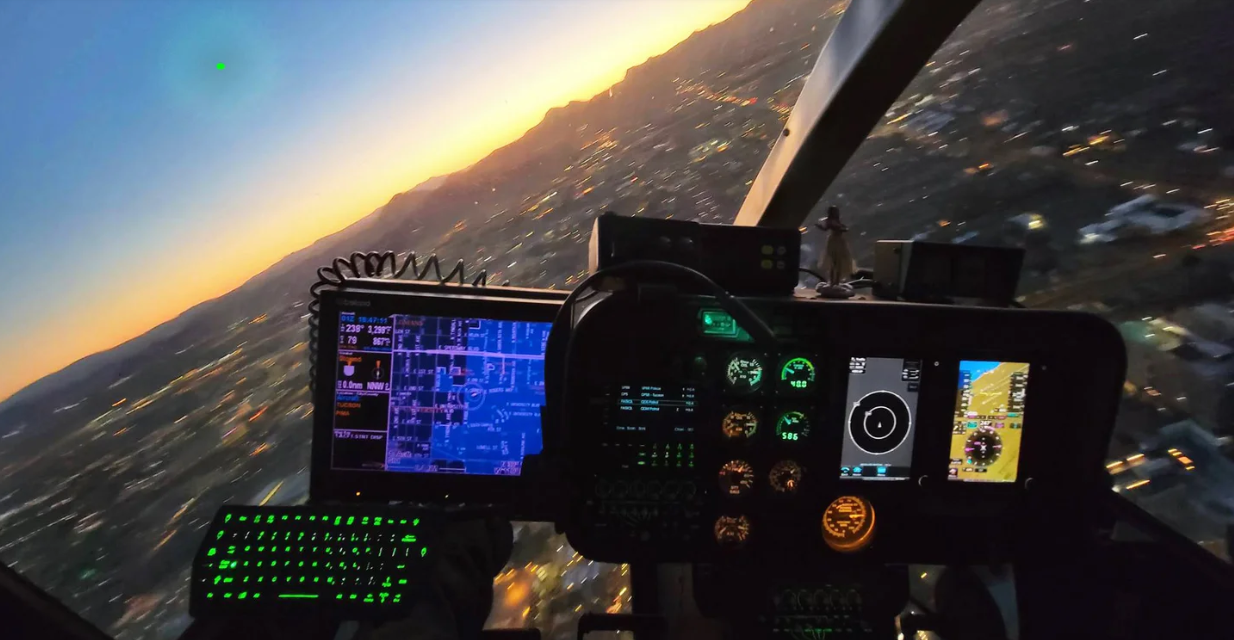 The unexplained flying object cropped up above fuel tanks west of Davis-Monthan Air Force Base, reports The Drive.

It then darted into controlled airspace around the military field, and the Tucson International Airport – with cops and border crews in hot pursuit.

Plus it managed to out-fly the choppers by speeding away at more than 100mph – despite fleeing into a headwind.

The website – citing official reports – says it had a single green light underneath it, and it "was difficult for the police spotter to observe through night vision goggles".

Unfortunately no video recording was made of the bizarre incident.

FBI agents reported it as being "highly modified," and making “erratic maneuvers".

The elusive object has mystified authorities for months, with the FBI still seeking information since it was spotted near Tucson on February 9, 2021.

The agency said that at 10.30pm that night, a US Customs and Border Protection chopper crew told the Tucson Police Department a drone was flying dangerously close to their helicopter.

"Over the next few hours, multiple law enforcement agencies worked to locate the drone’s operator but were unsuccessful.

"The drone appeared to launch from an area about five miles south of Tucson and flew across Tucson and north over Marana," the FBI added. 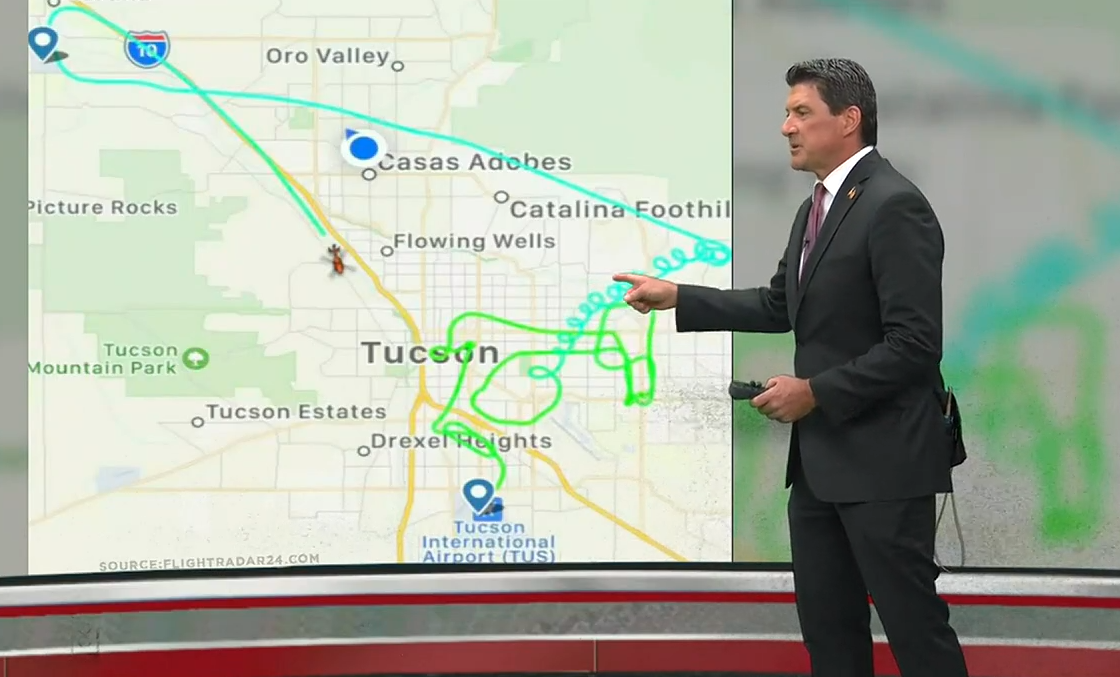 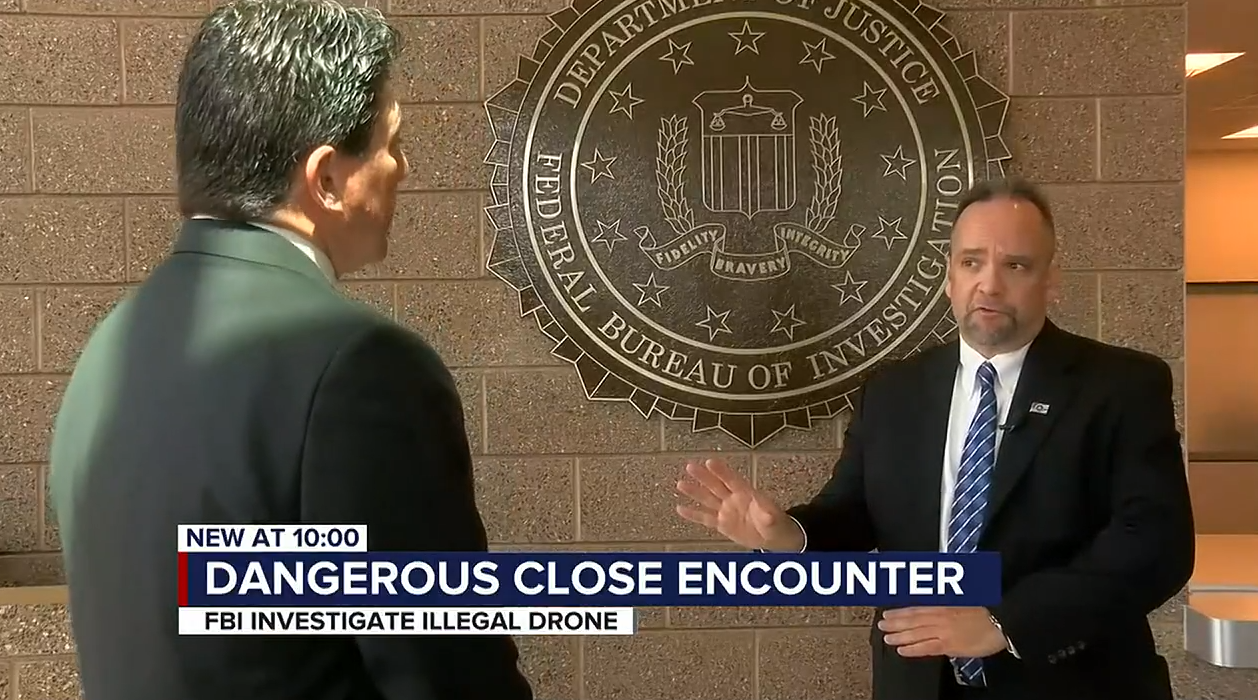 The FBI told KOLD News that it was unclear whether it was a quadcopter or hexcopter configuration.

But, worryingly it was close to a fuel terminal operated by energy company Kinder Morgan and just west of Davis-Monthan AFB.

The official report published by The Drive adds that it “maneuvered all over the city” while flying above 10,000 feet.

And it flew “in a manner to hamper [the TPD crew’s] ability to track it visually".

The cops noted it “appeared to move in an erratic pattern as if the signal with its home station was getting weaker”.

Tucson Police Department's helicopter pilot wrote that the crew “had hoped the unmanned aircraft systems (uas) would exhaust its battery reserves and be forced to land,” but “unfortunately, this was not the case".

The pilot also believed the uas was "very sophisticated/specialized and able to perform like no other uas” as it escaped them by traveling at speeds “well in excess of 100mph". 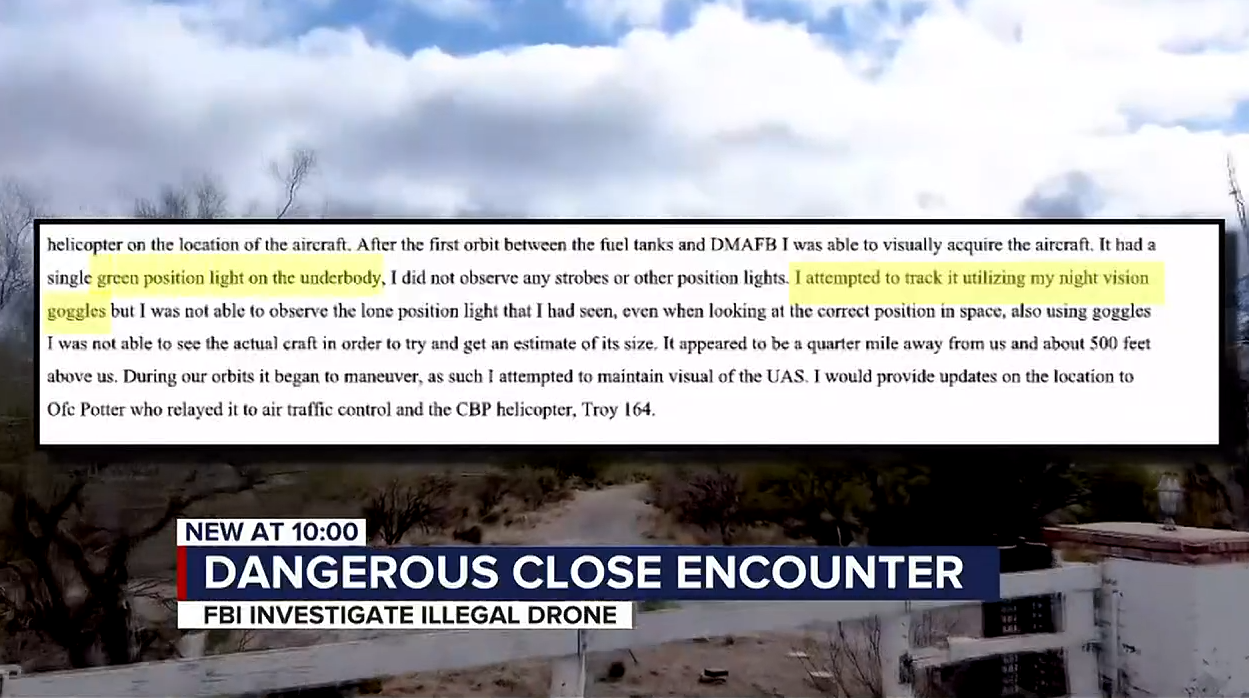 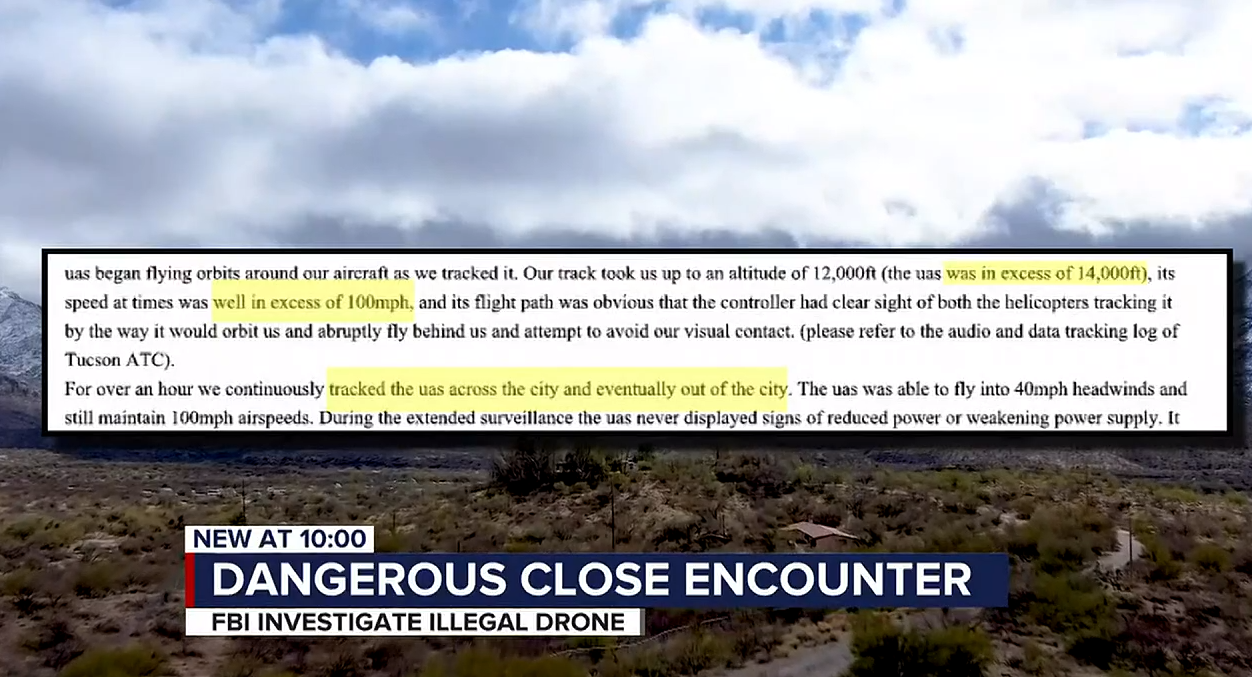 They added that it was “obvious the controller had clear sight of both the helicopters tracking it by the way it would orbit us and abruptly fly behind us and attempt to avoid our visual contact".

"Although we could not determine its exact size or characteristics we primarily tracked it by a single green non-blinking light illuminating from the craft," the report adds.

Eventually, after chasing the drone-like object for more than hour, both the customs and police choppers were forced to land and refuel.

The uas disappeared into cloud cover.

The pilot's report added: “It is unknown what the intentions of the sophisticated uas were during its time near the Air Force Base, or how far away its origination/destination spot was.

“It was quite clear though that this was not like any other uas that we have experienced.”

The FBI said "no one was injured and no other similar incidents have been reported involving this specific drone.

"While the drone(s) did not come into direct contact with an airplane or cause a pilot to make an evasive maneuver, the actions are illegal and extremely dangerous." 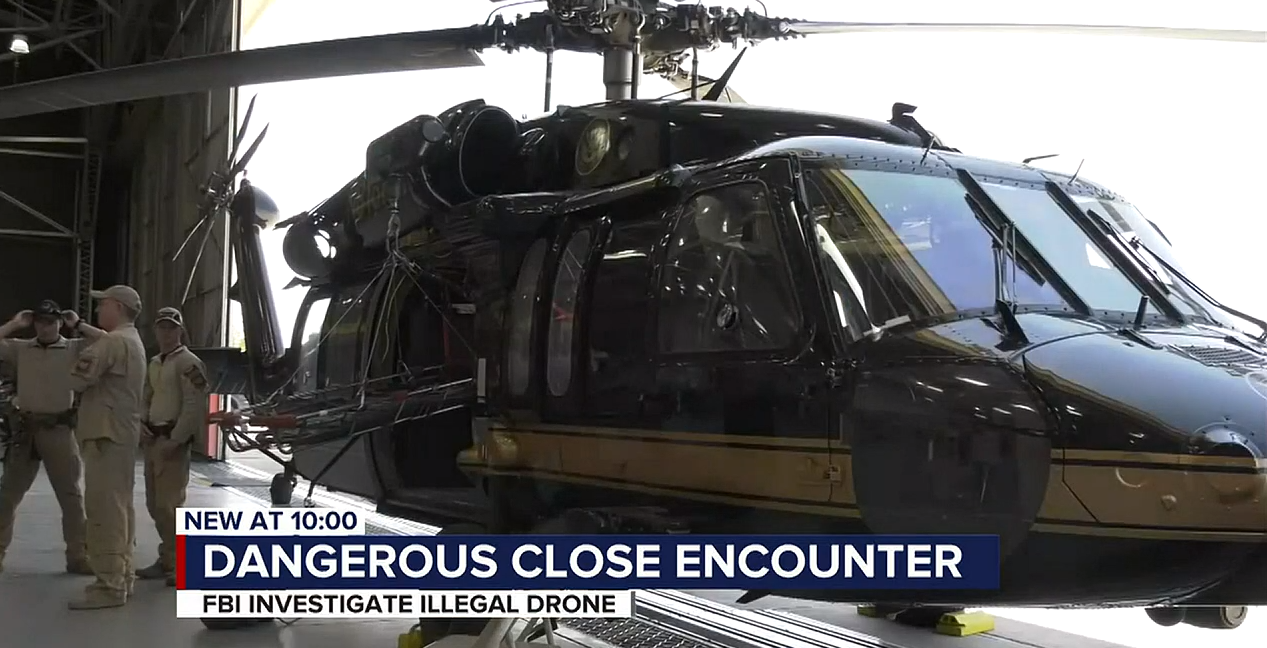