THE exact date snow will fall in the UK this autumn has been revealed – and it's sooner than you think.

However, some winter-watchers may be disappointed to find there won't be a dusting of the white stuff everywhere just yet. 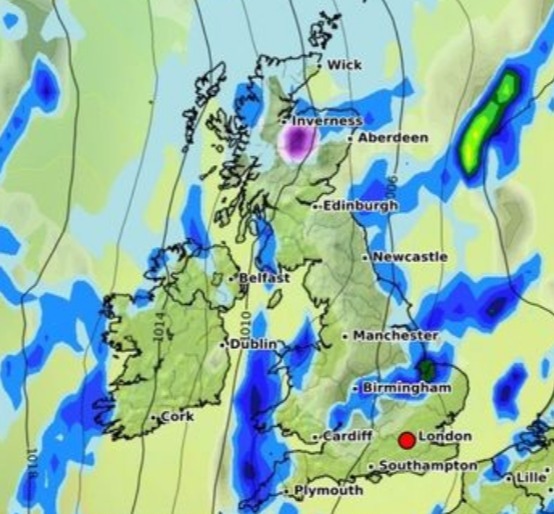 The highest peaks in northern Scotland will see snow from midnight tonight.

It will then drift further south, and could potentially reach Carlisle by the early evening on Wednesday.

Other areas of northern England could well be hit by the middle of the month too.

Four inches could fall across November.

Meanwhile, bookies have slashed the odds on some Brits seeing a white Bonfire Night as temperatures plunge amid a four-day Arctic blast this week.

Meteorologist Helen Roberts of the Met Office said: "Will there be snow from midnight tonight?

"Yes is the short answer, with some caveats.

"It won't be continuous.

"There'll be showers on and off, really over the very highest parts of the Cairngorms and possibly also part of central and southern Highlands.

"However, that will really be focused for the time being on just the highest peaks."

The chilly blast will see snow for the next few days – before things turn milder at the end of the week and rain washes any accumulations away.

Her colleague Aiden McGivern said a "much colder north-westerly air flow" will send the mercury tumbling this week.

"There'll be a cold feel because the wind is coming from the north," he said.

"As a result, it'll be another frosty one in places on Thursday morning, certainly in rural spots, where we'll see temperatures dipping below freezing."

And Stavros Danos of the BBC said: "We'll see increasing amounts of sunshine but we will notice it's going to be turning colder with northerly winds – it'll be cold by day and by night with overnight frosts.

"On Wednesday, colder air will be drawn down from the Arctic."

He said temperatures won't get much beyond 8C, and it'll feel particularly chilly in the wind.

James Madden of Exacta Weather said there'll be "significant snow events over higher ground" in the days to come.

"Looking to Bonfire Night, there will be a risk of widespread frosts as we get a taste of some early wintry conditions," he said.

“We are about to see a change in the weather paving the way for cold and wintry end to autumn.”

Ladbrokes has slashed the odds on snow falling anywhere in the UK on Bonfire Night from 5/1 to just 2/1.

Alex Apati, who works for the bookies, said: "Things are about to take a turn for the worse on the temperature front.

"We could be set for Bonfire Night snow if the latest odds are anything to go by."