STORM Ciara strikes the UK this weekend, bringing with it winds of up to 80mph and almost a month's worth of rain.

Yellow weather warnings have been issued by the Met Office for the next four days as Britain braces for wind, rain and snow. 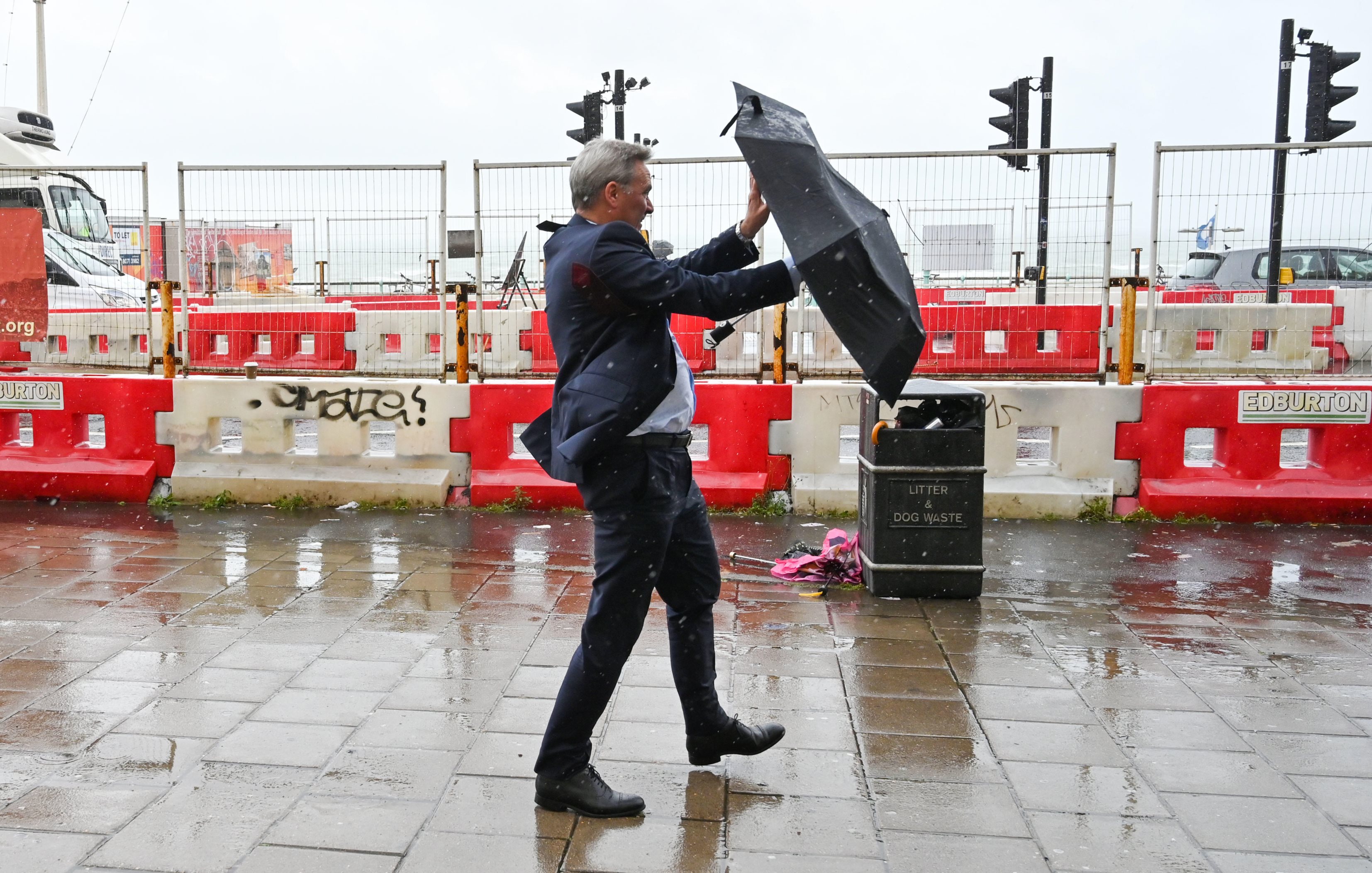 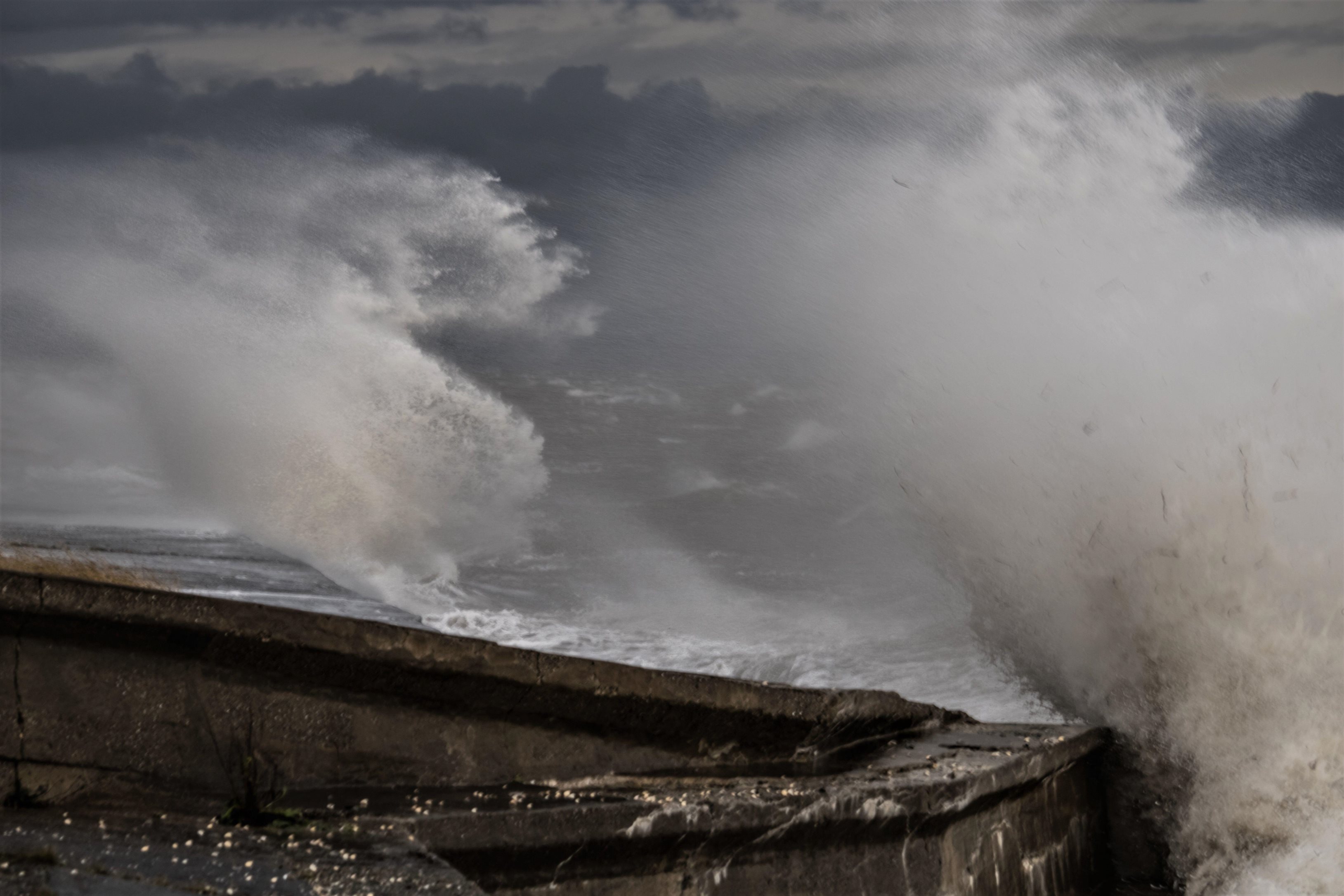 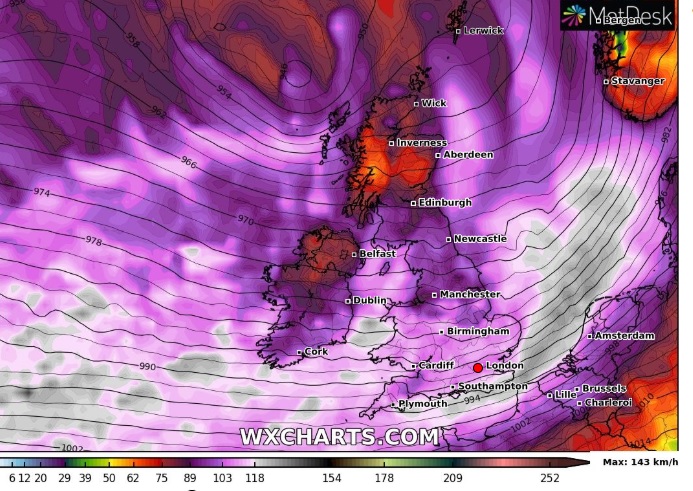 A warning for wind is in place from midday on Saturday as powerful gusts from Ciara whip northern England and Scotland.

The whole of Britain will be pounded by more strong gales from Sunday, with a risk of injuries from flying debris.

The Met Office issued another yellow weather warning for rain with torrential downpours due to drench much of the UK on Sunday.

Residents have been warned to expect flooding of homes and businesses and delays to bus and train services.

Power lines could be downed and coastal routes and sea fronts blasted by large waves.

Rain warnings are in place for South Wales, North West Wales and Cumbria and Lancashire on Sunday with up to 80mm of rain expected.

The average rainfall in South Wales for February is 85mm.

And more bad weather is due on Monday with and up to four inches (10cm) of snow expected in Scotland from Monday and fears of blizzards.

Met Office chief forecaster Neil Armstrong said: "An extremely strong jet stream flowing from North America will be steering a succession of low-pressure systems towards the UK at least into the middle of next week. 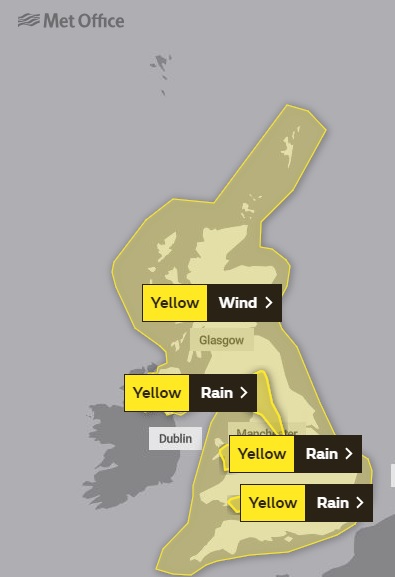 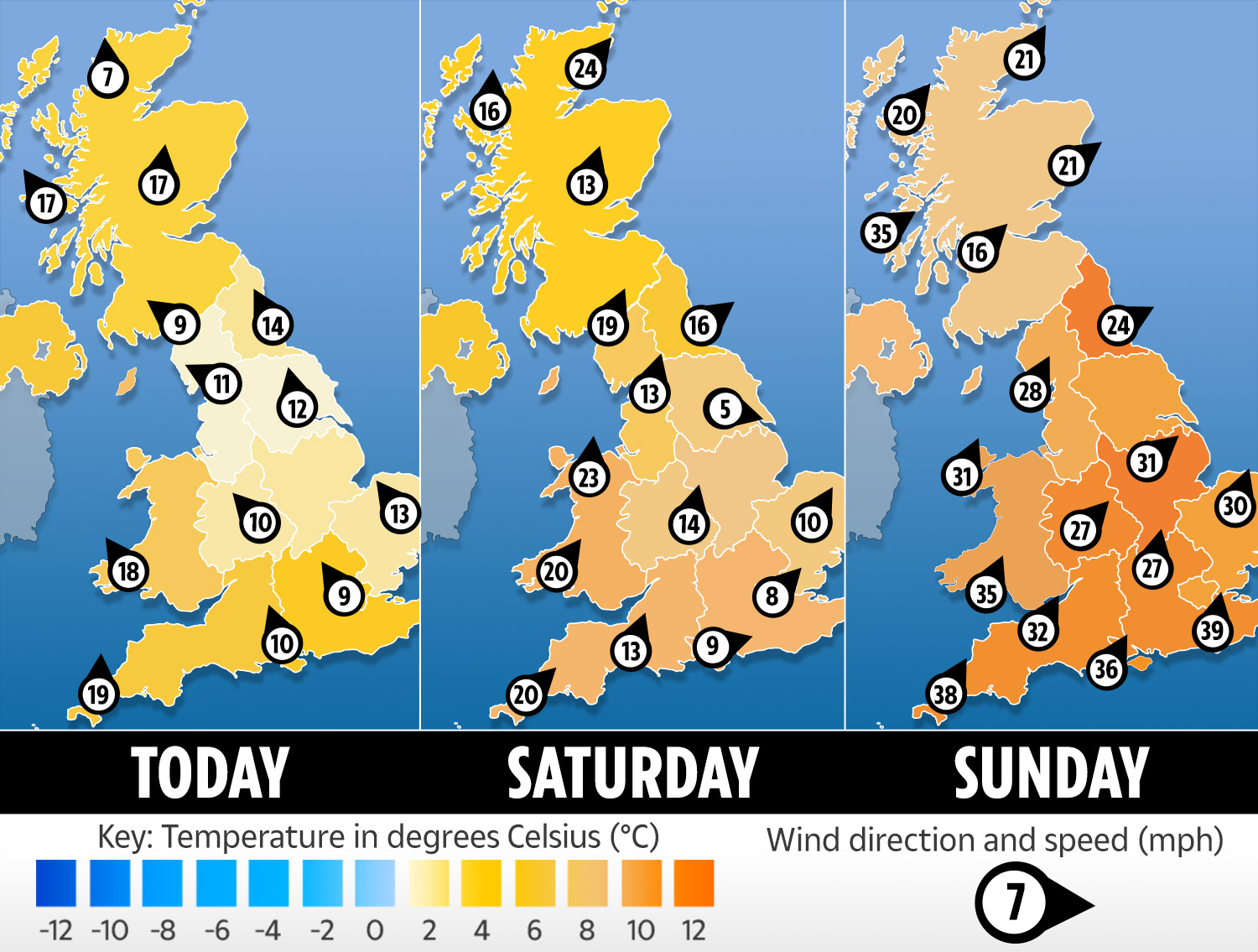 How to save £268 on your energy bills (Sponsored)

Why is it important to switch suppliers regularly?

Switchcraft lets you know every time you can save money by switching.

The £5 will be paid into your bank account within 120 days of completing the switch. *Prepayment meter customers will receive a £5 Amazon voucher. Open to those 18 and over. UK residents only. Click here for full T&Cs. News Group Newspapers Limited has a brand partnership with Switchcraft.

"The relative predictability of this pattern has provided an early warning and has given us the certainty to be able to name this storm four days ahead."

Storm Ciara barrels into Britain after Storm Atiyah smashed into our shores in December and Storm Brendan last month.

A Met Office warning said: "Very strong winds are likely across much of the UK later on Saturday and through Sunday.

"Gusts of 50 to 60 mph are likely across many inland areas, with gusts of 70mph, possibly 80mph, around some exposed coasts and hills, especially in the North and West.

"Heavy rain will be an additional hazard." 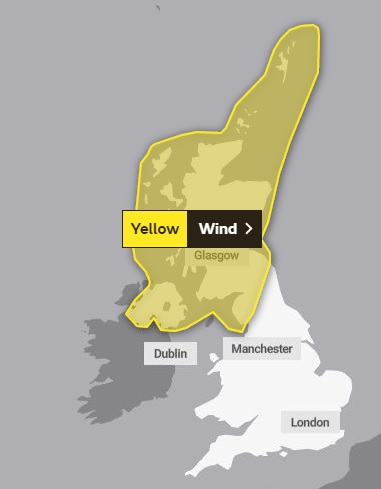 The severe warning for wind and heavy snow runs from midnight to 12pm on Monday and Tuesday in Scotland – with the Met Office warning there may be blackouts, travel delays and stranded vehicles.

But it looks like things will only get WORSE as the week goes on.

Analysis of weather data by the weather service WXCharts shows snow falling throughout next week, with flurries expected across northern England, including Liverpool, Manchester and Leeds, and Wales on Monday.

By Thursday, these are forecast to reach southern England, with the South Downs in Sussex, and parts of the South West.

Snow is more likely over higher ground, with it probably falling as sleet or wet snow in the south and unlikely to settle.

But WXCharts predicts up to 13 inches could accumulate in Scotland. Forecaster Snow Watch went even further – saying it might be as much as 20 inches.

It tweeted: "The stormy weather we are likely to see over the weekend will bring the risk of snow to high ground, particularly so over the Scottish Mountains where we could see 40-50cms by Tuesday." 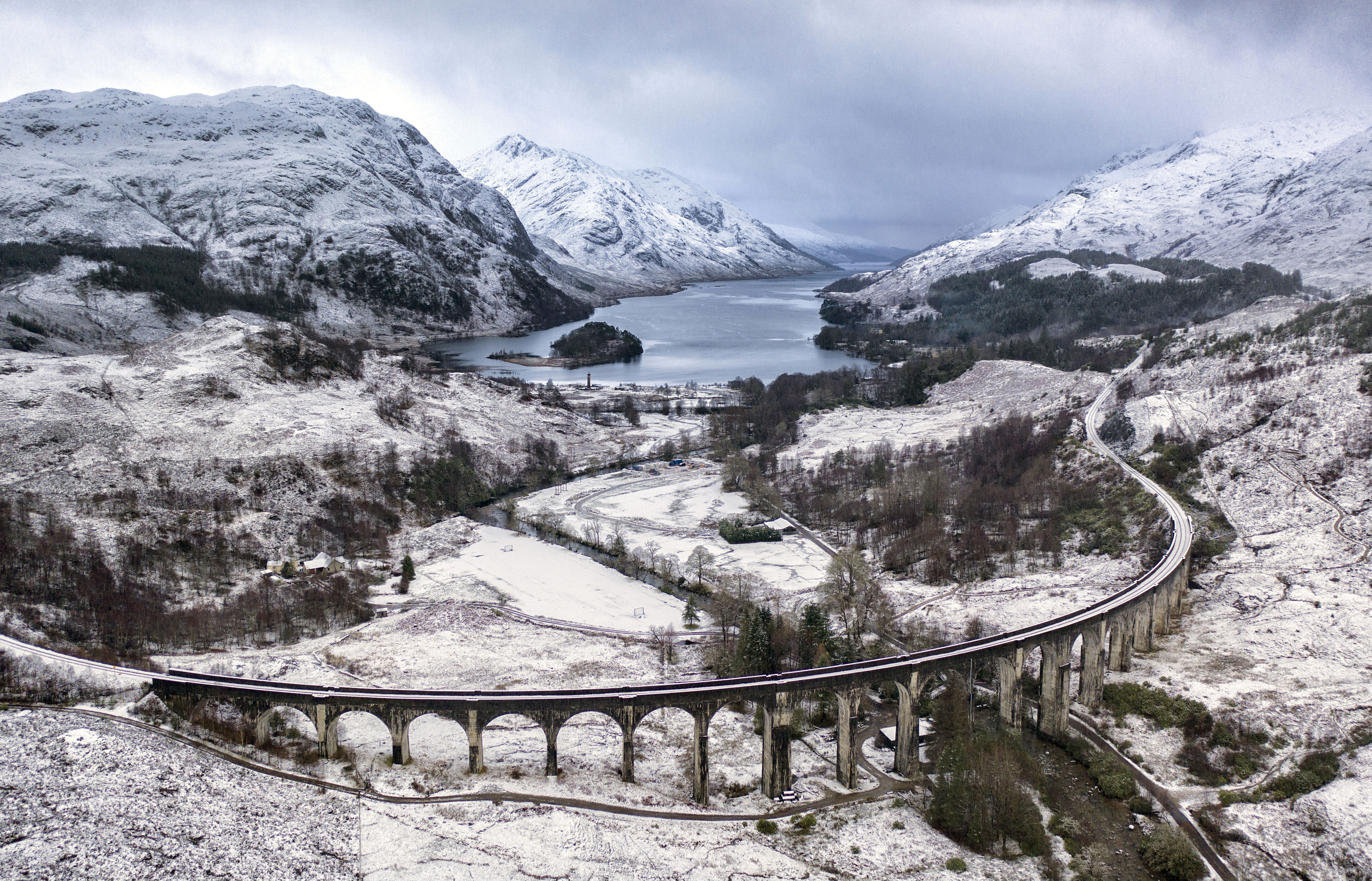