Kyiv: A third Russian airfield was ablaze from a drone strike, a day after Ukraine demonstrated an apparent new ability to penetrate hundreds of kilometres deep into Russian airspace with attacks on two Russian air bases.

Officials in the Russian city of Kursk, located just north of Ukraine, released pictures of black smoke above an airfield in Tuesday’s (Ukraine time) early hours after the latest strike. The governor said an oil storage tank had gone up in flames but there were no casualties. 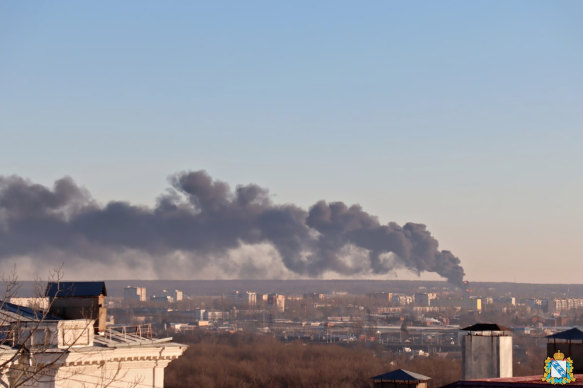 Smoke rises from the area of Kursk airport outside Kursk, Russia.Credit:AP

It came a day after Russia confirmed it had been hit hundreds of kilometres from Ukraine by what it said were Soviet-era drones – at Engels air base, home to Russia’s strategic bomber fleet, and in Ryazan, a few hours’ drive from Moscow.

Kyiv did not directly claim responsibility for the strikes, but nonetheless celebrated them.

“If Russia assesses the incidents were deliberate attacks, it will probably consider them as some of the most strategically significant failures of force protection since its invasion of Ukraine,” Britain’s ministry of defence said on Tuesday.

Russia’s defence ministry said three service members were killed in the attack at Ryazan. Although the attacks struck military targets, it characterised them as terrorism and said the aim was to disable its long-range aircraft.

The New York Times, citing a senior Ukrainian official, said the drones involved in Monday’s attacks were launched from Ukrainian territory, and at least one of the strikes was made with the help of special forces close to the base.

Ukrainian presidential adviser Oleksiy Arestovych went further, noting that Engels is Russia’s only base fully equipped for the fleet of huge bombers Moscow has used to attack Ukraine.

“They will try to disperse (strategic aircraft) to airfields, but all this complicates the operation against Ukraine. Yesterday, thanks to their ‘unsuccessful smoking’, we achieved a very big result,” he said. 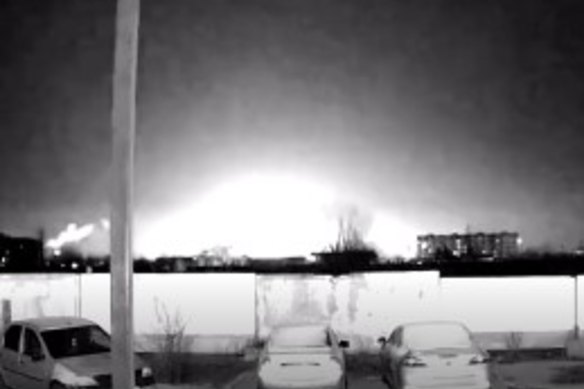 A blast at Engels air base near Saratov, Russia.Credit:Gerashchenko_en

The damage to the warplanes also caused grumbling among Russian military bloggers, whose social media posts can provide a window into the mood in Russia on the course of the war.

“And I, a naive civilian fool, thought that planes were kept under concrete shelters during war, no?” wrote Vladlen Tatarsky. “It turns out that small drones, the danger from which was so neglected, can attack strategic aircraft.”

The huge Tupolev long-range bombers that Russia stations at Engels form a major part of its strategic nuclear arsenal, similar to the B-52s deployed by the United States during the Cold War. Russia has used them in its campaign since October to destroy Ukraine’s energy grid with near weekly waves of missile strikes.

The Engels base, near the city of Saratov, is at least 600 kilometres from the nearest Ukrainian territory.

Russia responded to Monday’s attacks with what it called a “massive strike on Ukraine’s military control system”, though it did not identify any specific military targets for what Ukraine called Moscow’s latest strikes on civilian infrastructure.

Missiles across Ukraine destroyed homes and knocked out power, but the impact seemed less severe than barrages last month that pitched millions of Ukrainians into darkness and cold.

Ukraine’s air force said it had shot down more than 60 of around 70 missiles. President Volodymyr Zelensky said at least four people were killed.

A missile tore a crater out of the earth in the village of Novosofiivka, 25 kilometres east of Zaporizhzhia in southern Ukraine, and completely shredded a house. Ambulance workers collected two bodies lying by a destroyed car.

Olha Troshyna, 62, said the dead were her neighbours who were standing by the car seeing off their son and daughter-in-law when the missile struck. With her home now destroyed and winter setting in, she had no idea where she would go.

“We have no place to go back to,” she said. “It would be fine if it were spring or summer. We could have done something if it were a warm season. But what am I going to do now?”

On Tuesday, Zelensky visited troops in the eastern Donbas region that has seen the war’s heaviest fighting.

He praised soldiers in a selfie video filmed in front of a sign on the road outside Sloviansk, near the city of Bakhmut that Russian forces have been trying to encircle for weeks. He also presented medals and shook hands with troops in a hangar.

Russia claims a military justification for attacks on Ukraine’s civil infrastructure. Kyiv says the strikes are intended to hurt civilians, a war crime.

“They do not understand one thing – such missile strikes only increase our resistance,” Ukraine’s defence minister Reznikov said.

No political talks are underway to end the war. Moscow insists it will not negotiate unless Kyiv and the West accept its sovereignty over Ukrainian lands it claims, while Kyiv says Russia must leave all its territory.

Kremlin spokesman Dmitry Peskov said on Tuesday talks would only be possible when Russia achieves the goals of its “special military operation”, which he did not define.

“Russia must and will achieve the goals it has set,” he said “As for the prospects for some kind of negotiations, we don’t see them at the moment, we have repeatedly said so.”

However, Russia and Ukraine said on Tuesday they had swapped 60 prisoners of war on each side in the latest such exchange.

A Russian defence ministry showed men in military clothing walking off a bus and making phone calls. “All is well, alive and well. I’ll be home soon,” one said.

Ukrainian presidential chief of staff Andriy Yermak hailed the returning Ukrainians as heroes and said they included dozens who had held out in the city of Mariupol until Russia forced its surrender in May.