Liana Slipetsky is wearing a T-shirt that reads “STOP Putin your hands on Ukraine”.

The T-shirt is not just a political statement referring to fears Russian President Vladimir Putin will launch an attack against Ukraine, it’s a fundraiser.

The Noble Park branch of the Association of Ukrainians in Victoria is donating all profits to the Ukrainian Army, bracing for an invasion 15,000 kilometres away. 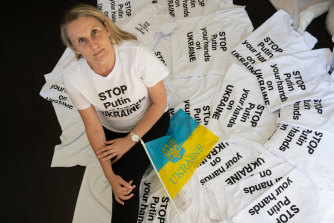 Liana Slipetsky is the president of the Noble Park chapter of the Ukraine Association of Victoria.Credit:Jason South

“Here in Australia we are incredibly concerned,” says Ms Slipetsky, president of the Noble Park branch of the Association of Ukrainians, an active community that celebrates Ukrainian culture, language, history and traditions.

“(Volodymyr) Zelensky, the (Ukrainian) president, said there’s no need to panic, but he kind of has to do that because can you imagine if the whole country was on war alert, you know, what would happen?”

Ms Slipetsky said the fact Russia had moved troops to Ukraine’s northern neighbour Belarus for joint military exercises was a big threat considering Russia invaded and annexed Crimea in 2014 and there was ongoing conflict in eastern Ukraine.

“Ukraine’s been living under the threat of war for years. So yes, we’re incredibly concerned, but also I guess buoyed by the fact that the world seems to have cottoned on to the fact that Putin is a spin doctor,” she said.

“He’s going to try and concoct a reason to then say that Russians were threatened and he had to attack.”

Ms Slipetsky, who was born in Australia to Ukrainian parents, still has family who live in an industrial village in eastern Ukraine.

“They’re not wealthy … they can’t just buy a plane ticket and get out of there. So they are just being cautious. One of their sons is 17 and he’s a cadet in the army. He’s been told that if war erupts he’ll need to go, trained or not trained.”

Ms Slipetsky also has family in western Ukraine, who told her there is a feeling in the air that war is imminent.

“I also have an Australian friend who’s living in Kyiv. She’s decided to stay put. She has an emergency plan. She hasn’t told me what that is yet. I think she is keeping her cards close to her chest.”

There are currently 147 Australian citizens, permanent residents and their dependents registered as being in Ukraine, where Australians have been told to leave as soon as possible.

Prime Minister and Cabinet acting deputy secretary Rod Brazier told a Senate estimates hearing on Monday the decision to close the embassy in Kyiv was made over the weekend. Three diplomats and two Australian Federal Police officers are now running a temporary office in Lviv, near the Polish border.

Ms Slipetsky said she believed Australia’s response had been swift and measured.

“I know there’s criticism that Australia is not going to be sending any military aid, but I don’t think that they’re in a position to do that.”

However she would like to see Western powers – including Australia – introduce tougher sanctions against Russia.

Trade Minister Dan Tehan said on Monday it was highly likely there would be very strong sanctions against Russia if it invaded and “we’ll have to play our part in that regard”.

“We want a de-escalation, but if (invasion) happens, then you’ll be looking at sanctions and we’ll be a part of that,” he said.

Australia already has sanctions in place against Russian figures, which were first imposed in 2014 and extended in 2015.

They have sought to punish 52 entities and 168 individuals since the annexation of Crimea and the downing of Malaysian Airlines Flight MH17 in 2014.

Sergiy Demyanchuk, who moved to Sydney from Ukraine in 2014, said Russia should be shut out of the global financial system.

“I think that would be a very strong message to the Russian government, to the president that if you try to meddle with us this is what’s going to happen.”

US President Joe Biden has reportedly considered excluding Russian banks from the SWIFT global payment system, which handles international financial transfers and is used by more than 11,000 financial institutions in over 200 countries. However, there is resistance to this from European lenders who expressed concern that banning Russia from SWIFT would mean billions of dollars of outstanding loans they have in Russia would not be repaid. Reuters reported on February 11 it was not under active consideration.

Mr Demyanchuk said he is in constant contact with his parents, sister and friends in Ukraine.

“Everyone is concerned but being quite, you know, strong and stoic, I would say and they say like, you know, we keep calm and polish the gun,” Mr Demyanchuk said.

“They say, ‘Look, we’re staying where we are and if this is going to happen, well, so be it, we will fight back’.”

He said his family told him some Ukrainians were stocking up on groceries but there was no food shortages and nothing like the panic buying seen in Australia during the pandemic.

“I spoke to my friends this morning and they said, ‘you know, where we saw the queues? The gun shop’. If you get a licence, you get a permit from the police, you can buy a gun. So they say there is a spike in the demand for guns.”

He said Ukraine should have been allowed to join the North Atlantic Treaty Organisation, something that requires all member states to agree.

“They should have done that a long time before.”