A company chaired by former Victorian premier Steve Bracks has accused AMP Capital of damaging its brand after the global firm locked small businesses out of three of its flexible working hubs amid a dispute over unpaid rent.

AMP put padlocks on the doors at three high-profile CBD buildings in Melbourne and Sydney that were occupied by flexible office provider Victory Offices at the start of this month after Victory defaulted on its rent. 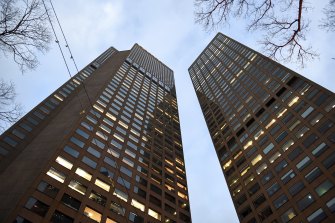 Collins Place is at the top of Collins Street.Credit:Penny Stephens

The relationship between the two companies has broken down as they have failed to come to an agreement over the owed rent, with AMP hitting back at ASX-listed Victory and claiming it has not paid rent since before the coronavirus pandemic struck. Victory does not dispute this.

A Victory spokesperson accused AMP of “unfair treatment” and of locking out businesses that lease the hubs with no warning as they faced COVID-19-related economic challenges. The hubs are at level 30 Collins Place, level 35 Bourke Place and the EY Centre in Sydney.

“AMP Capital’s actions have damaged our business, our brand and undermined the confidence and trust of our shareholders and market,” the spokesperson said.

“Our members, who are mostly small businesses – already impacted by COVID’s economic downturn and lockdowns – have unnecessarily suffered further by AMP’s actions. 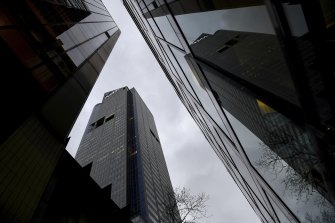 “Without any warning, formal notice and contrary to our ongoing discussions, AMP Capital locked access to our offices.”

The spokesperson said Victory had provided more than $1 million in rent relief to its members but AMP had refused to give a reduction despite being offered solutions.

However, an AMP spokeswoman said Victory first defaulted on its rent in 2019 and that AMP had provided ample warning it would need to take action over “significant outstanding debts”.

“We have been in good-faith discussions with Victory Offices for almost two years about its non-payment of rent at CBD properties in Sydney and Melbourne,” she said. “We put forward a number of proposals to Victory Offices. Despite agreeing to various options at different times, Victory has never made any payments for outstanding rents.”

The AMP spokeswoman said the investment management company had responsibilities to its investors, including Australian super funds managing retirement incomes.

“We were left with no choice but to take this action,” she said. “We have demonstrated compassion and support for Victory Offices at all times and feel we have done everything possible to avoid this outcome.”

Victory has been hit hard by Victoria’s lockdowns, noting in its March-quarter update that it was in negotiations to surrender five leases.

But its spokesperson said Victory remained in a financially sound position. “Our board and senior management team is as confident as ever in our being a leader in the flexible workspace solution industry,” they said.

Collins Place law firm Robert Gray Lawyers told the Australian Financial Review, owned by Nine, which also owns The Age and Sydney Morning Herald, that Victory’s members had been caught by surprise. “There were a bunch of businesses there who did not know there was a problem and suddenly have nowhere to operate from,” principal Kevin Broadribb said.

“You’re running a law firm, you’re doing well, and all of a sudden you turn up and the doors are locked and you can’t get in to get to your equipment or talk to your clients. It’s absurd.”

The law firm is representing Victory in the dispute.

The Victory spokesperson did not answer questions about how many businesses had been affected by the closures.

The AMP spokeswoman said the firm had provided significant rent relief to its tenants during the pandemic and was among the first companies to welcome a mandatory code of conduct for commercial landlords.

The Victory spokesperson said it had reached compromises with almost all of its other landlords.