Washington: Congressional Democrats dropped opposition on Thursday to a $US4.6 billion ($6.5 billion) bill passed by the Republican-controlled Senate that would dispatch emergency funds to address worsening humanitarian conditions for migrant children and families on the US-Mexico border, lawmakers said. 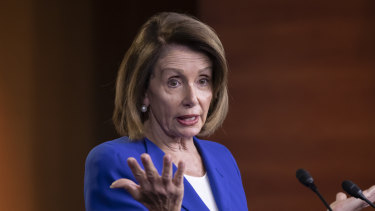 Speaker of the House Nancy Pelosi.Credit:AP

Leading Democrats in the House of Representatives said the chamber was likely to vote later on Thursday on the spending bill, which was approved by the Senate on Wednesday.

A photo of two drowned migrants and reports of horrendous conditions for detained children have spurred efforts to craft compromise legislation to send to US President Donald Trump before Congress breaks this week for the US Independence Day holiday.

House Speaker Nancy Pelosi gave in to pushback from moderate Democrats and dropped plans to add migrant protections to the Senate bill.

"At the end of the day, we have to make sure that the resources needed to protect the children are available," Pelosi said in a statement. "In order to get resources to the children fastest, we will reluctantly pass the Senate bill."

Pelosi and liberal Democrats had earlier planned to amend the Senate bill to set health standards for facilities holding migrants, establish a three-month limit for any child to spend at an intake shelter and reduce spending for the Immigration and Customs Enforcement agency.

Attorneys representing migrant children filed papers in federal court in Los Angeles on Wednesday asking that the US government be held in contempt of court for "flagrant and persistent" violations of the terms of a 1997 agreement that governs the treatment of children in immigration detention. They requested immediate action be taken to remedy the "deplorable" conditions.

Trump has made cracking down on immigration a centrepiece of his administration but officials are saying they will soon run out of money for border agencies.

Border apprehensions hit their highest level in more than a decade in May, straining resources and creating chaotic scenes at overcrowded border patrol facilities. Many of the migrants are either children or families, mostly from Central America.

“Children are suffering at the border and we must act now to stop it,” Representative Ben McAdams wrote on Twitter, urging his, fellow House Democrats to back the bill that was approved by the Senate.

Lawyers and human rights workers said they found sick and hungry children when they visited the Border Patrol facility in Clint, Texas.

"Many had been detained for weeks, one even up to a month in really horrific conditions," said Clara Long, senior researcher at Human Rights Watch.

The conditions of unaccompanied children crossing the border has become a key issue in the 2020 presidential race. During a debate on Wednesday night, many of the Democratic candidates called for an overhaul of US immigration laws and about 12 of them are set to visit a Florida facility this week.

A photo of a Salvadoran father and his toddler daughter who drowned attempting to cross the Rio Grande added urgency on both sides of the aisle to reach a funding deal.