US withdrawal of troops from Syria has officially begun, military spokesman confirms but refuses to discuss timeline of exit or specific locations

An American military official says the U.S.-led military coalition has begun the process of withdrawing troops from Syria.

Col. Sean Ryan, spokesman for the U.S.-coalition fighting ISIS, says the U.S. started ‘the process of our deliberate withdrawal from Syria.’

The withdrawal began Thursday night, according to the UK-based monitoring group Syrian Observatory for Human Rights. 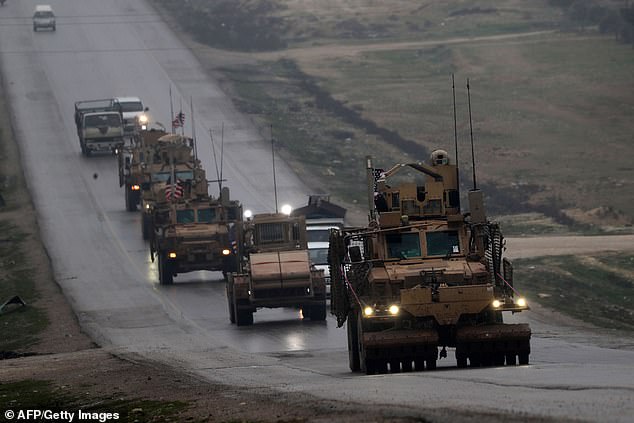 The U.S. has started ‘the process of deliberate withdrawal from Syria’. Pictured is a convoy of US military vehicles in Syria’s northern city of Manbij two weeks ago

It said a convoy of about ten armored vehicles, in addition to some trucks, pulled out from Syria’s northeastern town of Rmeilan into Iraq.

‘CJTF-OIR has begun the process of our deliberate withdrawal from Syria,’ spokesman Colonel Sean Ryan said in a statement, referring to the US-led anti-jihadist force.

‘Out of concern for operational security, we will not discuss specific timelines, locations or troops movements,’ he said.

Trump’s shock announcement on December 19 that he was withdrawing all 2,000 American troops from the conflict-wracked Middle Eastern country concerned allies and prompted the resignation of his then defense chief Jim Mattis.

Since then, however, administration officials appear to have walked back considerably and the current envisaged timetable is unclear.

The removal of the equipment in recent days was first reported by CNN, which quoted an administration official with direct knowledge of the operation as saying it signaled the beginning of US withdrawal from the Middle Eastern country. 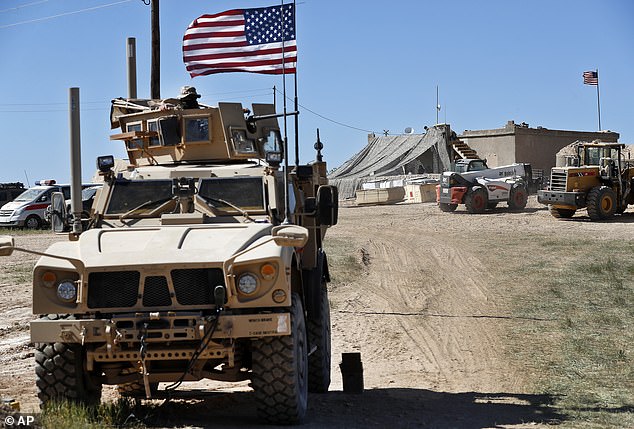 A U.S. soldier, left, sits on an armored vehicle behind a sand barrier at a newly installed position near the front line between the U.S-backed Syrian Manbij Military Council and the Turkish-backed fighters, in Manbij, north Syria in April last year

The official quoted by CNN would not describe exactly what the cargo was or how it was being transported.

They also did not say what part of Syria it came from, though it is expected the drawdown would begin in the country’s north.

The CNN report added that officials it had previously spoken to said the Pentagon wants to signal to the president it is working towards his goals following his withdrawal decision last month.

Though the removal of troops is not on the cards immediately, withdrawing equipment is a means of showing progress towards this goal, it added.

On Sunday, National Security Adviser John Bolton set out stringent conditions for the proposed withdrawal, saying the defense of allies must first be assured.

‘We’re going to be discussing the president’s decision to withdraw, but to do so from northeast Syria in a way that makes sure that ISIS is defeated and is not able to revive itself and become a threat again,’ Bolton said when meeting Israeli Prime Minister Benjamin Netanyahu in Jerusalem.

Speaking in Egypt Thursday, Secretary of State Mike Pompeo stressed the troop pullout from Syria would go ahead as he urged Middle East nations to forge a common stand against Tehran.