Taipei: Taiwan and the US are moving ahead with a plan to finance infrastructure and energy projects in Asia and Latin America as a way to provide an alternative to China's Belt and Road Initiative.

The informal US-led alliance would use capital raised from the private sector to provide greater transparency to countries seeking funding to develop their infrastructure, Taiwan's finance minister Su Jain-rong said. 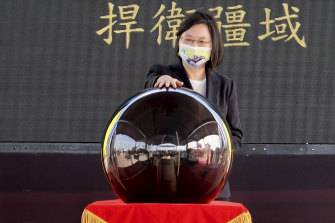 Taiwanese President Tsai Ing-wen touches a ceremonial orb to inaugurate the production of domestically-made submarines. The move marks a step forward for the island’s defence strategy amid elevated tensions with China.Credit:AP

He said he hoped to see the first projects start within the next year or two.

The plan, initiated with the signing of an agreement between the US and Taiwan in September, will to raise funds through bonds aimed at Taiwanese banks, insurers and other private capital. It is an opportunity for both Washington and Taipei to counter China's global infrastructure spree amid concerns about Beijing's commitment to international projects and worsening finances among developing countries.

The Belt and Road Initiative (BRI) relies heavily on loans from Beijing to governments and typically involves Chinese state-owned enterprises. The Taiwan-US plan, however, "strongly emphasises the participation of the private sector, while also stressing that funds should be raised via the market, which makes it highly transparent," Su said. 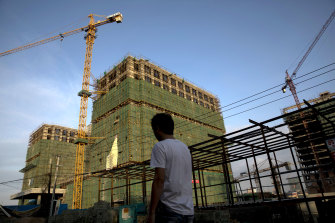 A pedestrian walks past a construction site in Sihanoukville, Cambodia, where an infusion of Chinese-built infrastructure promises to pay off with jobs and prosperity. Credit:Bloomberg

Taiwan's infrastructure lending intends to be more transparent through the greater disclosure of information, such as amounts raised, yields and intended use, as part of the bond-sale process.

The island is the latest addition to an expanding roster of US partnerships on infrastructure investment in third countries. Sixteen other countries have reached similar agreements with Washington, according to Su, under which companies from those countries work with the US International Development Finance Corporation to fund infrastructure projects. Japan, South Korea and Australia announced a partnership with the US in 2018.

One major benefit of the financing framework for Taiwan lies in offering its cash-rich insurers the opportunity to find greater yields than are typically available at home, backed up by political support from the US.

President Donald Trump's administration has made backing Taiwan a key pillar of the White House's efforts to counter Chinese influence, and Su said he didn't see the financing collaboration changing much after Joe Biden takes office on January 20. He attributed that to shared values and strong bipartisan support for Taiwan in Washington.

"After he takes office, Biden should maintain the basic framework" of the plan, the minister said. "It's unlikely that there will be an about-face."

Taiwan has found itself in something of an economic sweet spot in the escalating battle for global dominance between the US and China, with exports to the world's two largest economies surging over the past year. Taiwan's exports to the US are likely to continue their strong growth with an end to the trade war nowhere in sight, Su said. Taiwan's economy should also continue to benefit from Taiwanese companies bringing investment back from China, he added.

Taiwan's economy grew 3.3 per cent in the third quarter, government data was expected to show on Friday, according to the median estimate of a Bloomberg survey of 12 economists. The government's official full-year GDP forecast, last updated in August, is for 1.6 per cent growth.

"This year's economic growth is going to exceed what we had expected," Su said, without elaborating.