The White House freeze, according to two senior administration officials, is effective immediately and is aimed at stopping Putin from accessing his $600 billion financial reserve to stabilize his country’s economy in light of new sanctions.

The move was described as the most ‘significant action’ that Treasury has taken against an economy of Russia’s size, according to a senior administration official who briefed reporters on the sanctions on the condition of anonymity.

The Russian bank announced its main interest rate will rise to 20 percent – its highest this century – from 9.5 percent to counter the risks of the ruble’s rapid depreciation and higher inflation, which threaten Russians’ savings.

People wary that sanctions would deal a crippling blow to the economy have been flocking to banks and ATMs for days, with reports on social media of long lines and machines running out of paper currency.

The latest sanctions are likely to tank the ruble once again, triggering an even greater economic crisis for Russia.

‘Our strategy, to put it simply, is to make sure that the Russian economy goes backwards as long as President Putin decides to go forward with his invasion of Ukraine,’ a senior U.S. official said on a call with reporters.

‘The images and videos from #Kharkiv of the war crimes committed by #Putin will shock & outrage the world,’ the Florida Republican senator added.

‘Russia’s invasion has damaged and destroyed schools, hospitals, radio stations, and homes, killing and injuring civilians, including children,’ Price said in a statement.

‘That the U.S. and Europe have done this in unified fashion sends a crystal-clear message that Russia will face dramatic costs so long as Putin’s war of aggression continues,’ he added. ‘This action represents a sea change in U.S. and European strategy. Just 72 hours ago, a step like this was unthinkable.’

Ukrainian and Russian delegations are meeting for peace talks at the Belarusian border on Monday.

Ahead of the negotiations, Ukraine said it’s seeking a ceasefire and total withdrawal of all Russian forces from its country, with President Volodymyr Zelensky saying he was not hopeful of results but had to try.

Moscow did not reveal ahead of the talks what its ambitions are in meeting with Kyiv officials.

Observers have warned that the talks could pre-sage an increase in fighting between Russian and Ukrainian forces, as Putin increasingly deploys heavy forces that were absent from early fighting in an attempt to force a victory that has so-far eluded him. 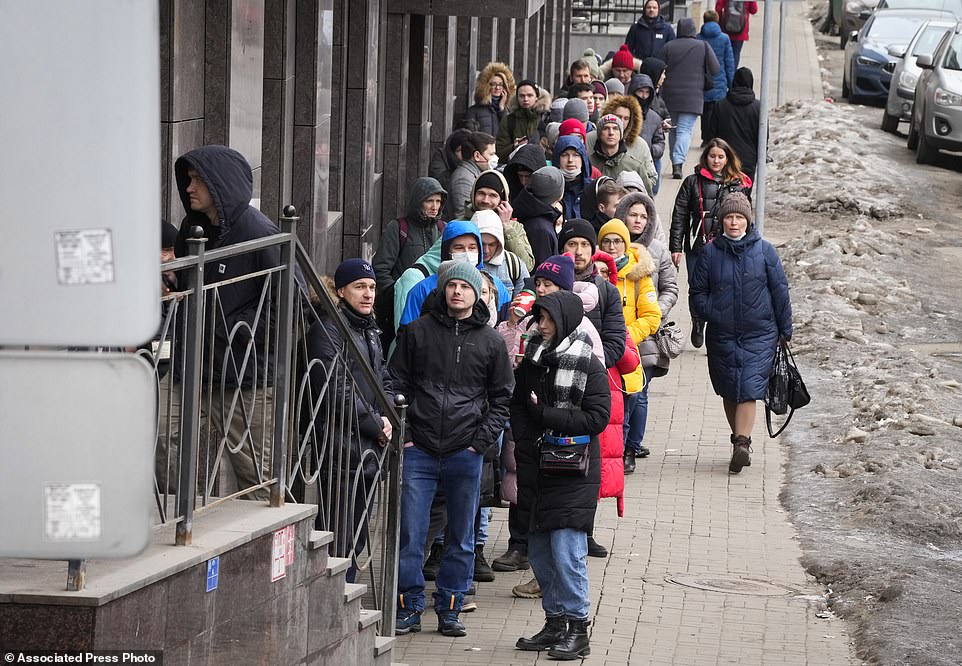 The Treasury Department announced Monday new sanctions targeting Russian financial institutions. This has led uneasy Russian people to line up at banks and ATMs on Monday (pictured) to recover money amid a barrage of severe economic sanctions following the invasion of Ukraine that has sent the ruble plummeting 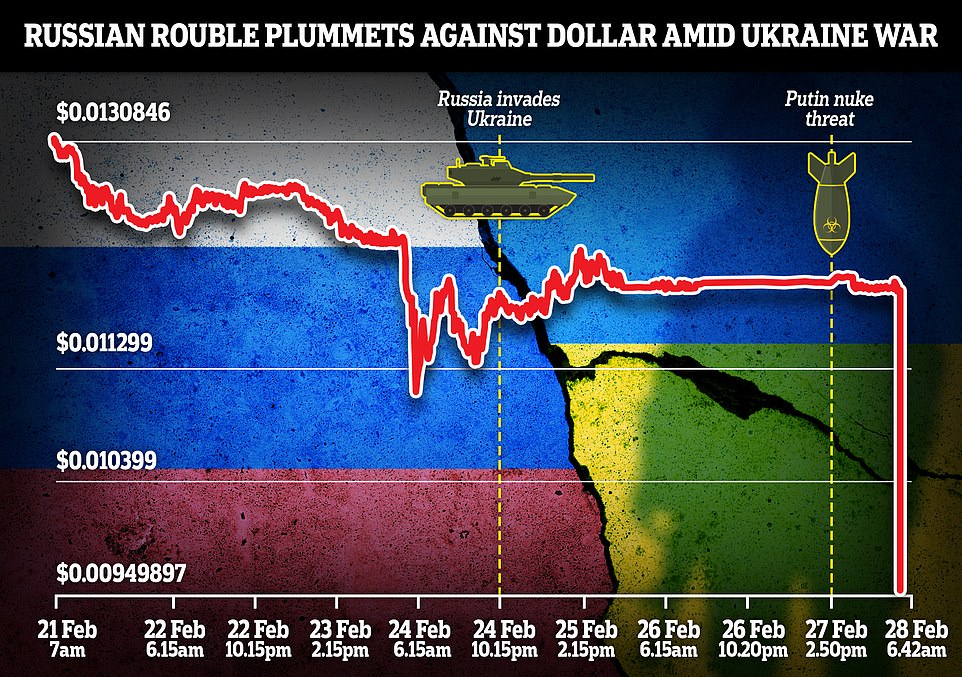 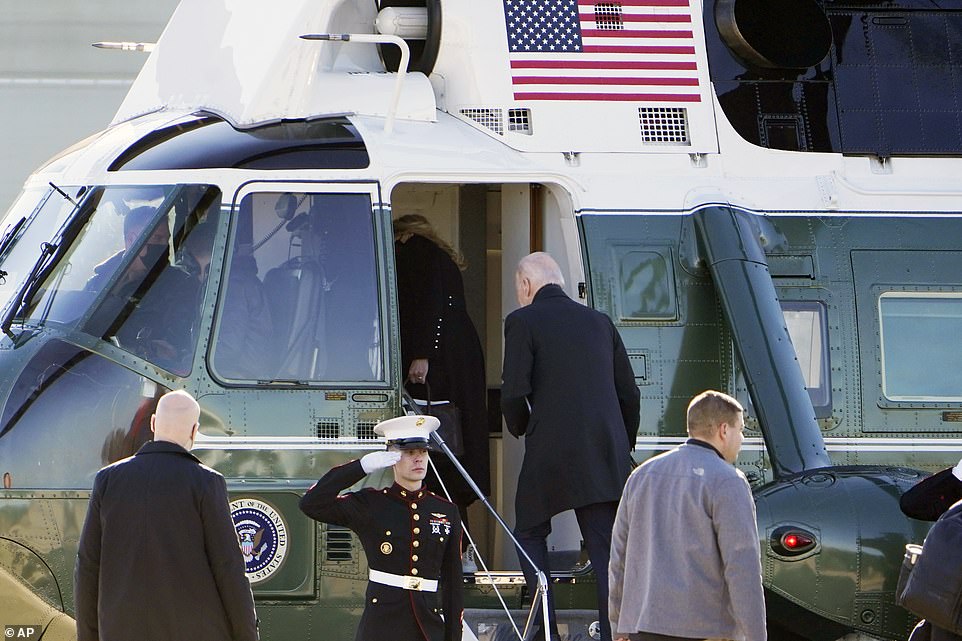 As Kyiv and Moscow hold peace talks in Belarus on Monday, President Joe Biden and first lady Jill Biden are pictured boarding Marine One to fly back from Delaware to Washington, D.C. When back at the White House, Biden will host a secure call with NATO allies and partners to discuss Russia’s attack on Ukraine and coordinate united response 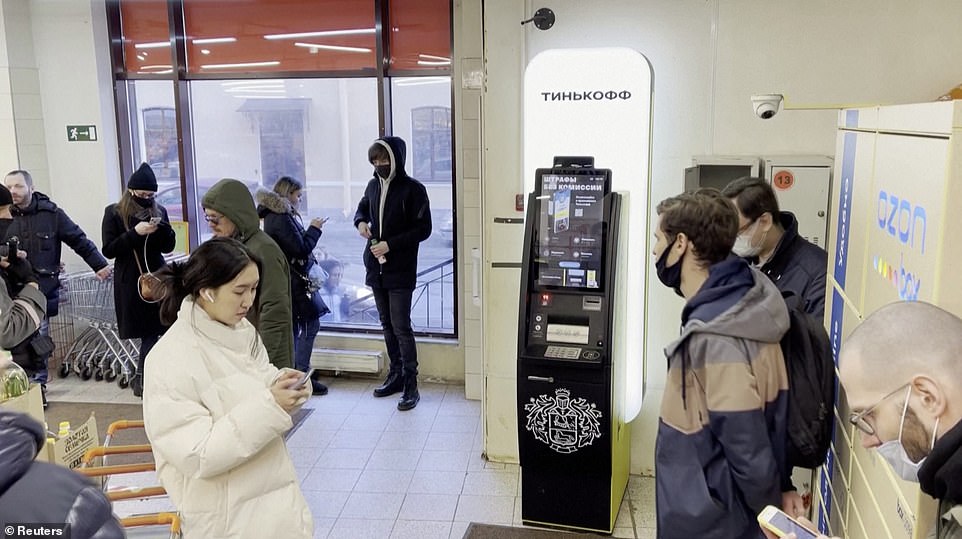 In a bid to stop a run on the ruble, Russia’s central bank, The Bank of Russia, is hiking interest rates from 9.5% to 20% this morning. Pictured: Residents queue to withdraw cash in Saint Petersburg 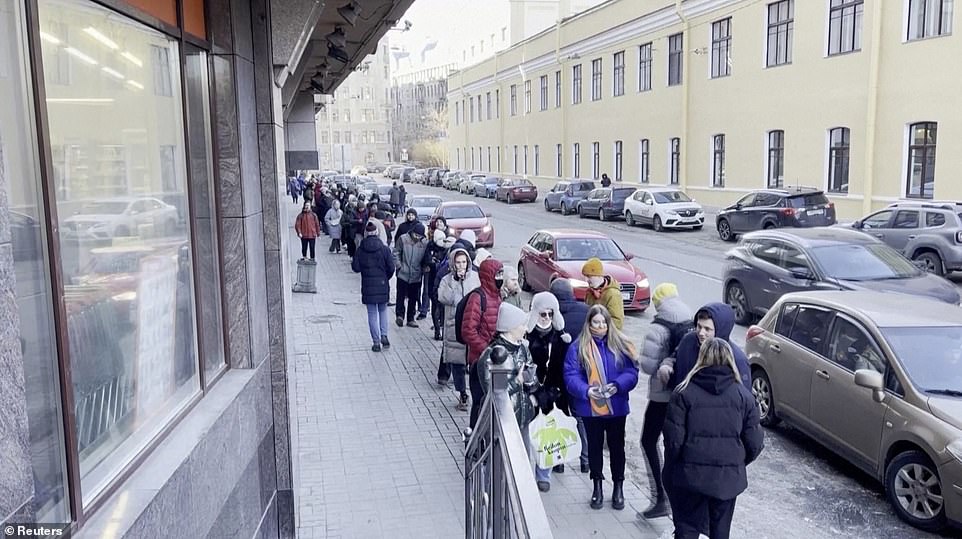 Treasury said the move effectively immobilizes any assets of the Russian Central Bank in the U.S. or held by Americans, and would severely limit Putin’s ability to mitigate impact of other sanctions.  Pictures show people in Saint Petersburg queuing around the corner to use nearby cash machines, as fears rise of an economic collapse due to biting Western sanctions

There are fears that Kyiv could soon come under very heavy attack, after the Kremlin warned civilians to leave the city via a ‘safe route’ to the south-west. Russia used similar tactics in Syrian cities while fighting alongside Basahar al-Assad before its forces heavily bombed them.

Treasury Secretary Janet Yellen said in a statement Monday that ‘The unprecedented action we are taking today will significantly limit Russia’s ability to use assets to finance its destabilizing activities, and target the funds Putin and his inner circle depend on to enable his invasion of Ukraine.’

The agency said the move effectively immobilizes any assets of the Russian Central Bank in the United States or held by Americans, and would severely limit Putin’s ability to mitigate the impact of previous sanctions.

The Biden administration estimated that the move could impact ‘hundreds of billions of dollars’ of Russia funding.

Treasury noted in its Monday statement: ‘Russian President Vladimir Putin and his inner circle of cronies have long relied on RDIF and Dmitriev to raise funds abroad, including in the United States.’

‘By further restricting these persons and entities from the U.S. financial system, the United States continues to demonstrate its unwavering commitment to support Ukraine, impose costs on Putin’s inner circle or those connected to Putin and his war of choice, and to prevent Putin’s regime from raising capital to fund its invasion of Ukraine and other priorities,’ the statement details.

On Monday, the State Department also announced it suspended operations at the U.S. Embassy in Minsk, Belarus. It also authorized the ‘voluntary departure’ of non-emergency employees and family at the embassy in Moscow.

‘We took these steps due to security and safety issues stemming from the unprovoked and unjustified attack by Russian military forces in Ukraine,’ the State Department noted in a statement on the move.

The U.S. also warned on Monday of sanctions against Belarus if it joins Russia in its assault on Ukraine. 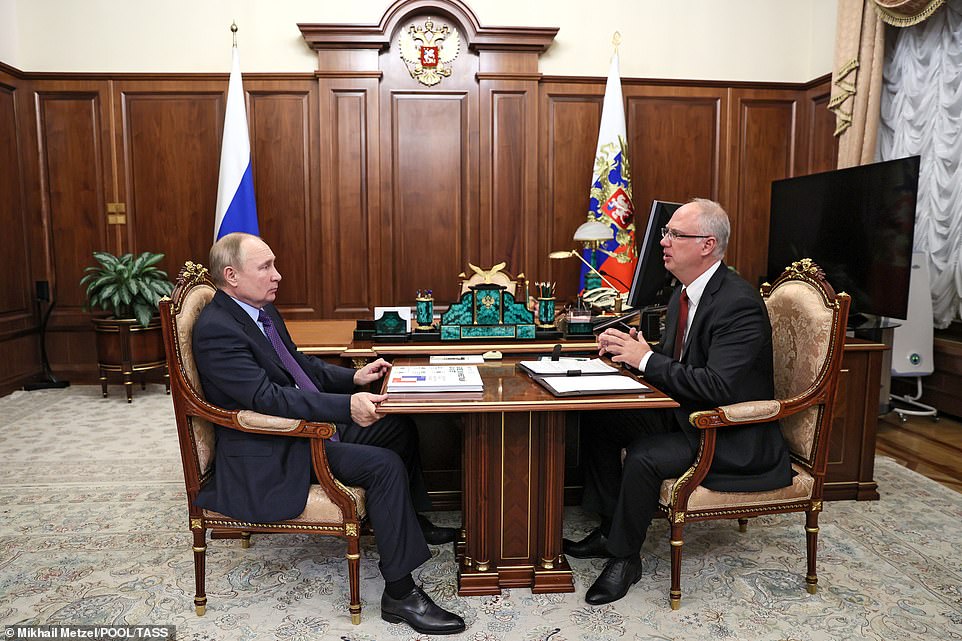 President Biden directed last week, and Treasury announced implementation Monday of sanctions on the Russian Direct Investment Fund, a key Russian sovereign wealth fund that has exposure to the U.S. financial system, and on it’s CEO and key Putin ally Kirill Dmitriev (pictured on right meeting with with Putin on December 30 in Moscow) 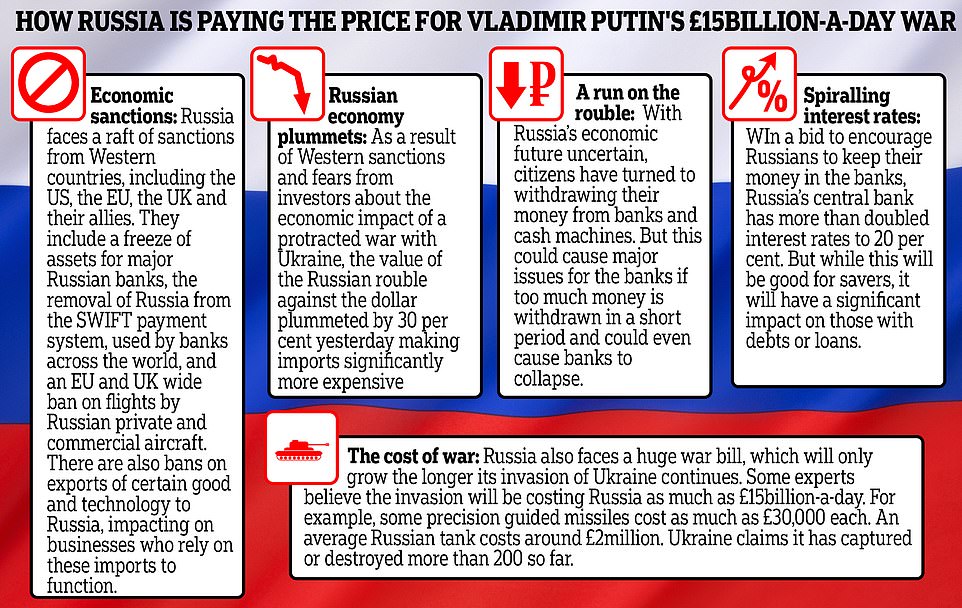 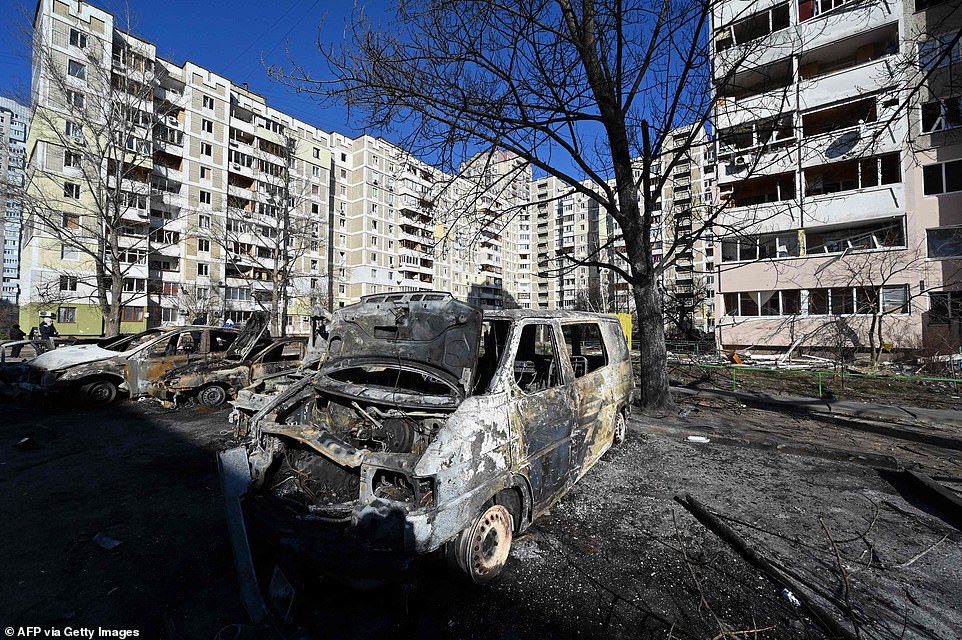 Kyiv awoke from a night of heavy Russian bombardment on Monday, as fears increase that Putin’s troops could step up attacks as Ukrainian and Russian delegations meet in Belarus for peace talks on February 28, 2022 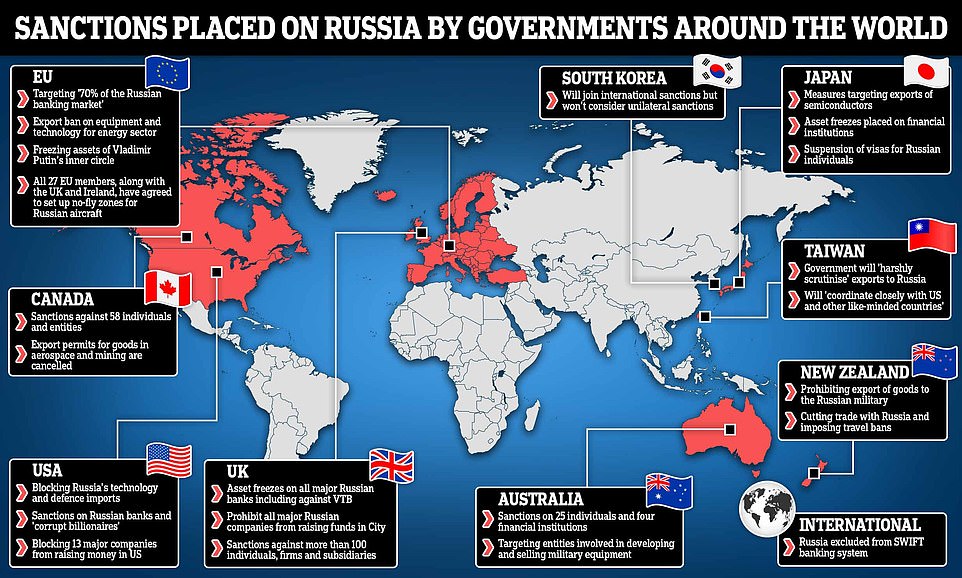 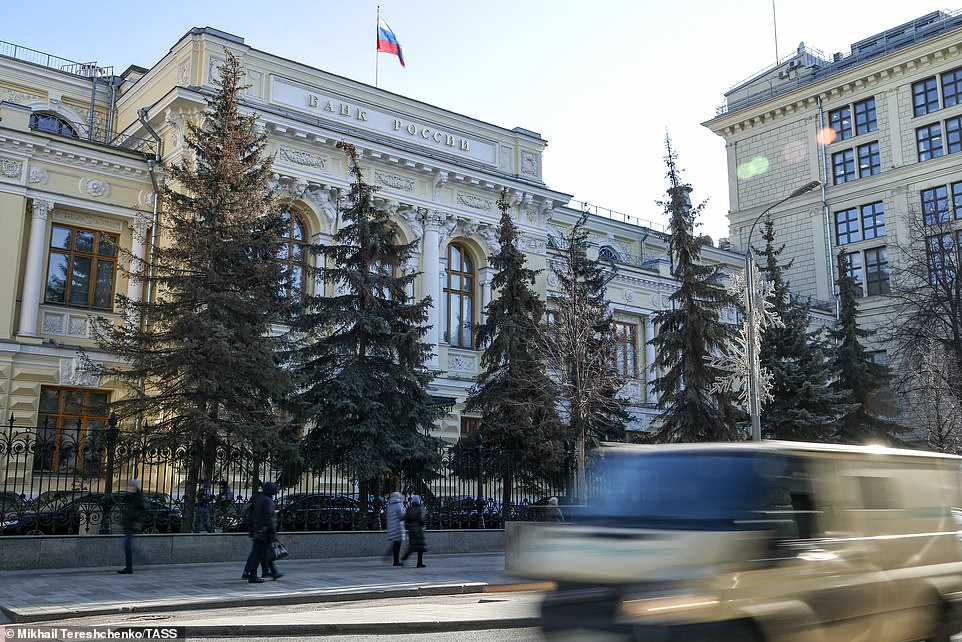 Treasury announced implementation of new sanctions targeting the Russian central bank and state investment funds in the latest retaliation for the invasion of Ukraine (pictured: an outside view of the Central Bank of the Russian Federation) 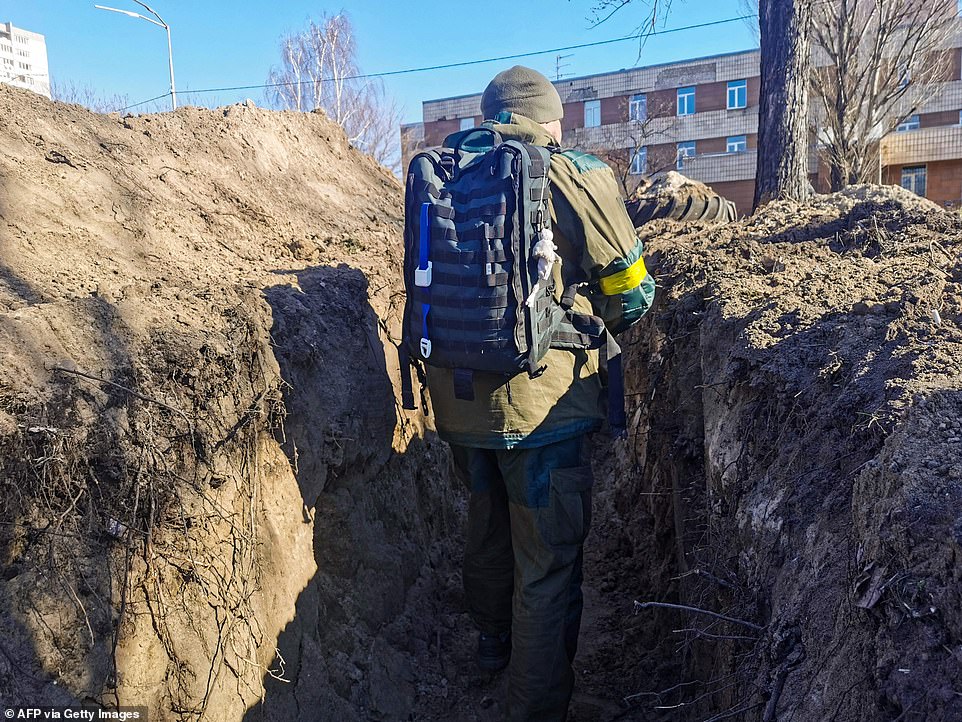 A Ukraine resident who volunteered to right against Russia prepares a post with trenches in Kyiv on Monday, February 28, 2022 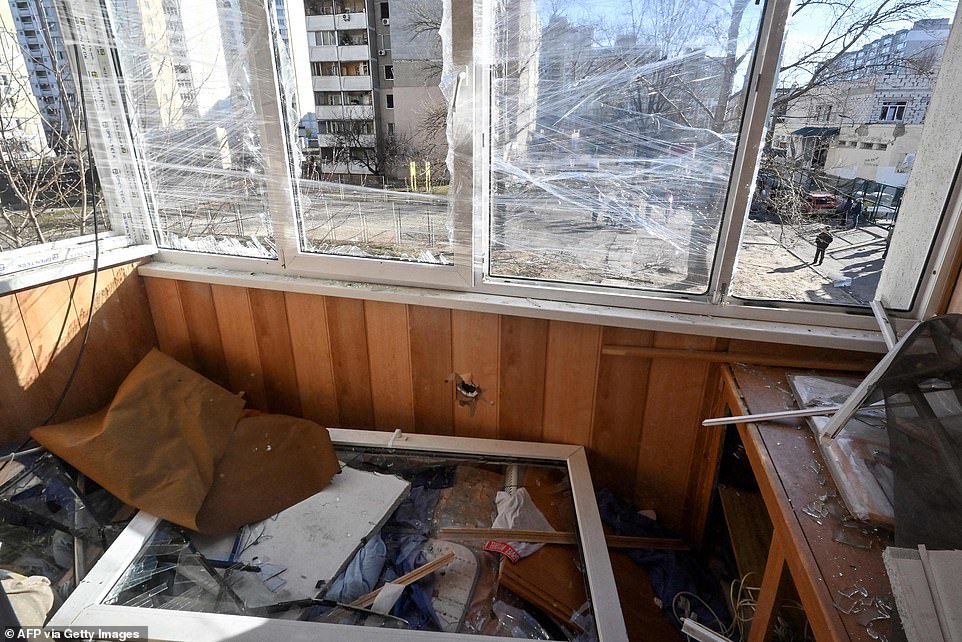 An apartment building shown Monday on the outskirts of Kyiv, Ukraine after it was destroyed by Russian shelling. At least 102 civilians, including seven children, have been killed in Ukraine since Moscow started its invasion last week

The new Treasury sanctions announced Monday come after the ruble plunged about 30 percent against the U.S. dollar when Western nations announced moves to block some Russian banks from the SWIFT international payment system and to restrict Russia’s use of its massive foreign currency reserves.

British Chancellor Rishi Sunak confirmed earlier today that the UK Government will match sanctions imposed by the US and the EU by preventing Russian central banks from accessing cash in the UK.

Mr Sunak said: ‘These measures demonstrate our determination to apply severe economic sanctions in response to Russia’s invasion of Ukraine.

‘We are announcing this action in rapid coordination with our US and European allies to move in lock step once more with our international partners, to demonstrate our steadfast resolve in imposing the highest costs on Russia and to cut her off from the international financial system so long as this conflict persists.’ 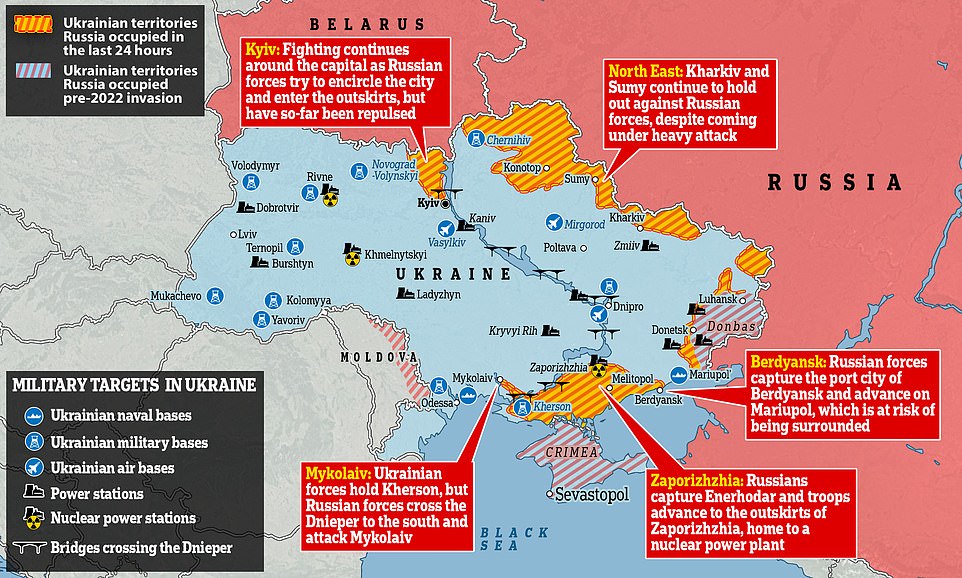 Ukraine war, day 5: Russian forces are now attempting to skirt around Kyiv and encircle it from the west. Troops fighting out of Crimea continue to make gains and are likely to surround Mariupol soon, while also reaching the outskirts of a key Ukrainian nuclear plant. Fighting in the east continues to be heavy with no breakthrough for Putin

Euroclear in Brussels said it has closed its link to rival settlement house Clearstream Banking in Luxembourg for settling trades in Russian securities in response to European Union financial sanctions.

Euroclear, owned by exchanges and banks, and Clearstream, part of Deutsche Boerse, settle securities transactions – the final leg of a trade when legal ownership is swapped between the two sides of the transaction.

‘We closed the bridge with Clearstream Banking Luxembourg for the settlement of all Russian domestic securities and all securities denominated in the Russian ruble,’ a Euroclear spokesman said on Monday.

The London Stock Exchange told its members on Monday they must conduct their own checks to ensure compliance with any applicable sanctions, as trading in UK listings of Russian energy giant Gazprom and Sberbank continued on Monday.

The LSE declined to comment on whether it planned to suspend trading in its Russian listings.

The London exchange suspended membership on Friday of VTB Capital, the trading arm of Russian bank VTB, which has been targeted with sanctions. VTB’s depository receipts on the LSE have not traded since Friday’s close.

Moscow’s department of public transport warned city residents over the weekend that they might experience problems with using Apple Pay, Google Pay and Samsung Pay to pay fares because VTB, one of the Russian banks facing sanctions, handles card payments in Moscow’s metro, buses and trams.

A sharp devaluation of the ruble would mean a drop in the standard of living for the average Russian, economists and analysts said. Russians are still reliant on a multitude of imported goods and the prices for those items are likely to skyrocket.

Foreign travel would become more expensive as their rubles buy less currency abroad. And the deeper economic turmoil will come in the coming weeks if price shocks and supply-chain issues cause Russian factories to shut down due to lower demand.

‘It’s going to ripple through their economy really fast,’ said David Feldman, a professor of economics at William & Mary in Virginia.

‘Anything that is imported is going to see the local cost in currency surge. The only way to stop it will be heavy subsidization.’

The Russian government will have to step in to support declining industries, banks and economic sectors, but without access to hard currencies like the U.S. dollar and euro, they may have to result to printing more rubles.

It’s a move that could quickly spiral into hyperinflation.

Since Russia launched its invasion last week, at least 102 civilians, including seven children, have been killed in Ukraine. 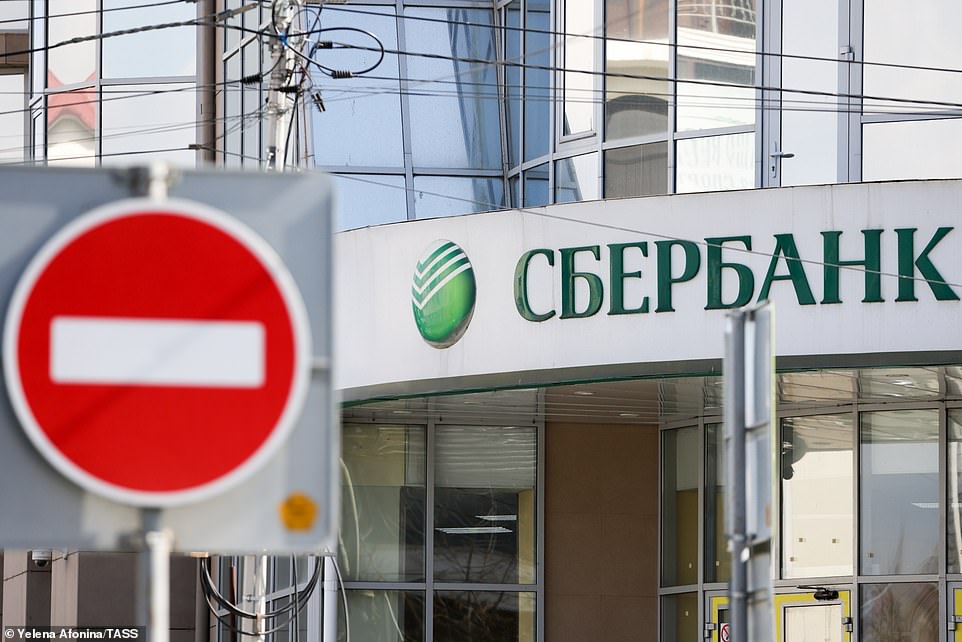