Crew members about the Navy’s USS Chafee say they’re being kept in the dark about the severity of a coronavirus outbreak among them – one that has resulted in dozens of sailors being removed from the ship in recent days, according to a report.

“No one is giving us information,” one petty officer serving aboard the Arleigh-Burke class guided-missile destroyer, who requested anonymity, told Navy Times.

A U.S. Third Fleet commander confirmed that some crew members had contracted the virus but would not supply specific numbers, citing Pentagon policy.

“The ship remains able to complete its mission,” Cmdr. Sean Robertson told the outlet. “No Chafee sailors have been hospitalized and all positives are in isolation.”

Robertson added that there was no plan “at this time” to test the entire crew of about 350 sailors.

Those infected are believed to include members of the ship’s culinary staff – meaning those who help prepare and serve food aboard the ship, which has been docked in San Diego since last weekend after arriving from Hawaii, Navy Times reported. 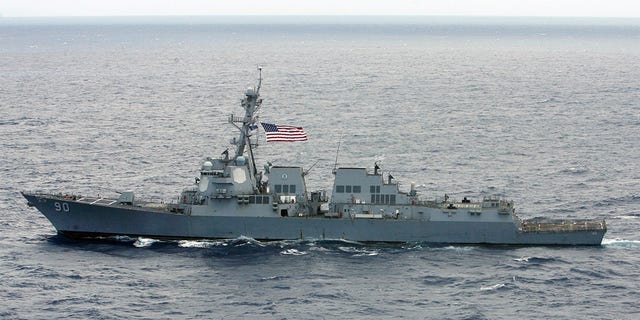 “Before pulling into San Diego we had seven people in quarantine and three tested positive,” a petty officer told the news outlet, “all the cooks that come into contact with the whole crew.”

Sailors currently in quarantine – in a barracks or at a nearby hotel — have either tested positive for the virus or come in close contact with those who have, according to the petty officer and another aboard the ship who spoke with Navy Times.

A “ROM Personnel Tracker” document obtained by the outlet this week shows 41 crew members were in quarantine for coronavirus-related reasons, the Times reported. “ROM” means “Restriction of Movement.”

The outbreak was believed to have spread to the ship’s technology, weapons and engineering crews, a second petty officer told the Times.

“I’ve had a few conversations with the engineers and at this point people are scared we won’t be able to get back to Hawaii based on the command and most likely Big Navy pushing us to certify – myself included,” the second petty officer told Navy Times.

Meanwhile, Chafee personnel told Navy Times the ship was low on supplies of N95 masks for the crew but Robertson disputed the claim.

“USS Chafee has an adequate supply of personal protective equipment and continues to maintain protective measures for its crew,” he said in an email.

Other Navy ships that have seen coronavirus outbreaks include the USS Michael Murphy last November and the USS Roosevelt last spring.