V-Day hero Martin Kenyon, 91, who became ‘national treasure’ after CNN interview reveals he used his new-found freedom to reunite with family in Shropshire over Christmas

A pensioner who became a ‘national treasure’ after getting the Pfizer vaccine on ‘V-Day’ today revealed he used his new-found freedom to reunite with his grandchildren over Christmas.

Martin Kenyon, who lives in south-west London, told ITV’s Good Morning Britain that he left the capital after having his second jab to see his family in Shropshire over the festive period.

The plain-speaking 91-year-old, who is a close friend of Archbishop Desmond Tutu and met Dr Martin Luther King, was asked by co-hosts Piers Morgan and Susanna Reid what he would do following his inoculation.

Standing outside in the cold, he paused and responded: ‘I expect you want me to say that I’m going to hug my daughters and granddaughters’.

After Ms Reid piped up: ‘Only if they live with you in a bubble’, Mr Kenyon admitted: ‘No, they’re in Shropshire where we spent Christmas together, and now I’m back here in London’.

Christmas was effectively cancelled for millions of people as the Government plunged London and the South East into Tier 4 curbs, including a ban on different households gathering.

Different households in Tier 3 Shropshire could form a bubble on December 25, meaning families were granted a one-day amnesty where they could legally celebrate Christmas together.

Mr Kenyon was one of the first people in the world to receive the Pfizer vaccine last month and became a viral star after a chance interview with CNN as he left Guy’s Hospital in London. 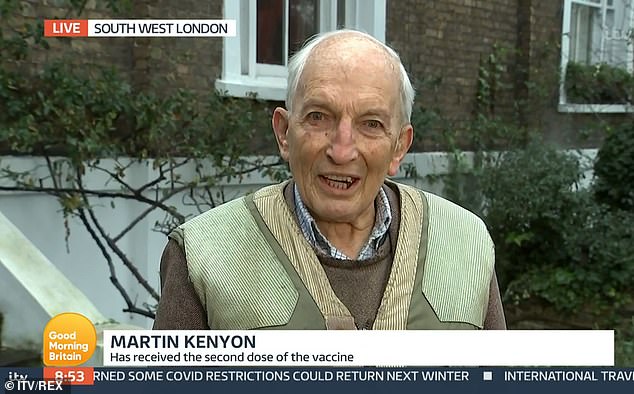 Martin Kenyon, who lives in south-west London, told ITV’s Good Morning Britain that he left the capital after having his second jab to see his family in Shropshire over the festive period 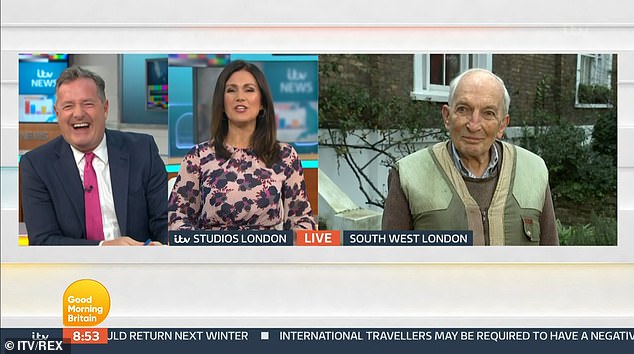 The plain-speaking 91-year-old, who lives in south London, spoke to hosts Piers Morgan and Susanna Reid about his trip out of the capital hours after his second Covid jab 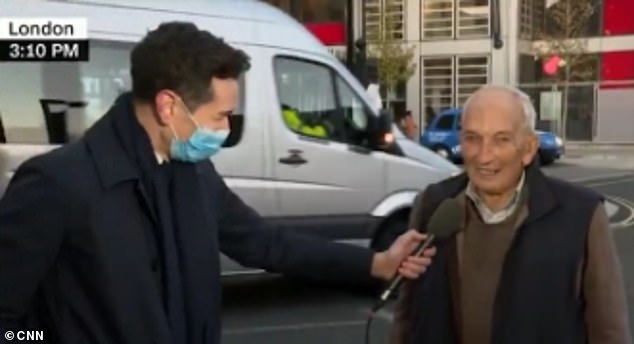 Martin Kenyon, 91, pictured during the interview, in which he spoke about being one of the first person to receive Pfizer’s jab at Guy’s Hospital in London, with CNN’s Cyril Vanier last month

Describing getting his first vaccine by simply phoning the hospital and booking a slot, he told anchor Cyril Vanier: ‘I’m not going to have the bloody bug now.’

Mr Kenyon later told Sky News he had received his second jab and described the publicity surrounding his first jab as ‘nonsense’.

He said: ‘It’s all rather uninteresting – I feel exactly the same. It’s a good idea for people to have it. It’s sensible. Rather like all the injections I’ve had all the 91 years I’ve lived.

‘I don’t understand the medical or scientific side of it all – but I do what I’m told and trust the experts.’

The 91-year-old’s CNN interview amassed tens of thousands of shares across social media, with fans praising the ‘charming gentleman’ and labelling him a ‘treasure.’

Mr Kenyon said: ‘I rang up Guy’s hospital which I know very well. I said you’re doing the vaccination and they said yes.

‘They asked me questions over the phone… about this and that and I said ‘yes, no, yes, no’ and ‘they said well come at half past twelve.’

‘Of course I couldn’t find anywhere to damn well park my car so I was late. They duly put me on the list, I went off and had a rather nasty lunch and then came back and they were ready for me.’

Hospitals will not typically allow people to phone to book a vaccine, but Mr Kenyon was given a spare appointment as he regularly attends the hospital. 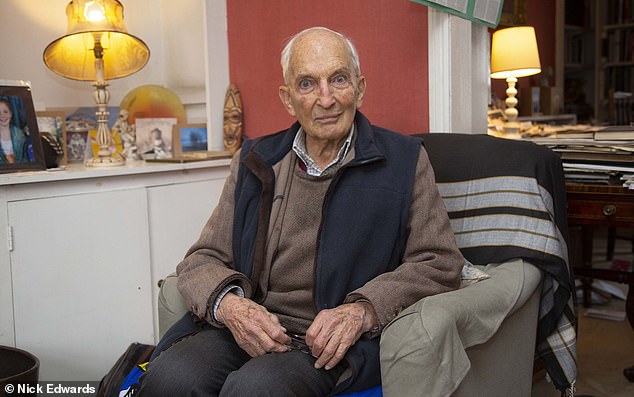 Martin Kenyon, pictured in his London home, has since received his second Covid vaccine jab 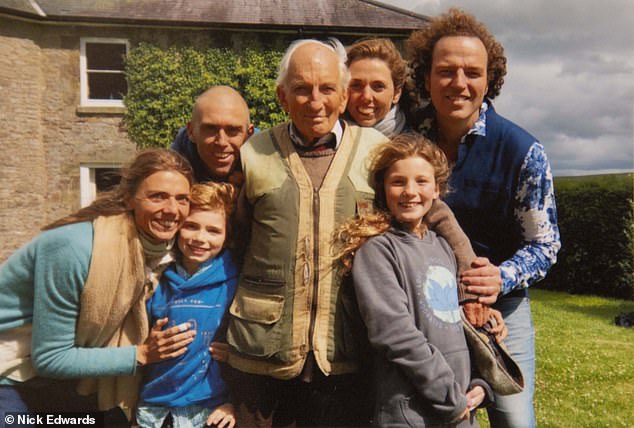 Asked how he felt about being one of the first people in the country to have the vaccine, Mr Kenyon promptly corrected the interviewer, saying: ‘In the World. I don’t think very much at all expect that I hope I’m not going to have the bloody bug now.

‘I don’t intend to have it because I’ve got granddaughters and I want to live a long time to enjoy their lives.’

He added: ‘Well there’s no point in dying now when I’ve lived this long is there? I don’t intend to anyway.’

Guy’s and St Thomas’ Hospital confirmed that Mr Kenyon had indeed promoted his own appointment.

A spokesperson for the hospital trust said: ‘He did call and there was a spare appointment so we gave it to him after we confirmed that he was one of our patients.

‘But our normal position is in line with the national one. We are proactively contacting all of our patients over 80. So we would ask patients to wait until we get in touch with them.’

Mr Kenyon told MailOnline last month he had been friends with Desmond Tutu for 60 years after he looked after the South African archbishop when he arrived in London in the early 1960s to study.

Through his friendship with the Anglican cleric, he became involved in the struggle to end apartheid in South Africa as well as racial injustice in the US, once spending an evening with Dr Martin Luther King in Chicago in 1966.

Mr Kenyon ran the Overseas Students Trust for 30 years between 1963 and 1993, and was based in South Kensington where he looked after foreign students who came to study in Britain.