Thursday's debate in Nashville, Tennessee, was supposed to be the third face-off of 2020, but was instead the second and final presidential debates after Trump declined to participate in one scheduled last week after it was moved to a virtual format following his COVID-19 diagnosis.

These are the biggest take-aways from the 90 minute debate. 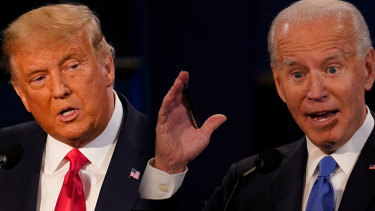 1. We have a vaccine that's coming, it's ready.

Trump announces up front of the debate that a vaccine is going to be announced within weeks, and it's going to be delivered through Operation Warp Speed with the US military organising and distributing 100 million vials of the vaccine. When the moderator Kristen Welker raised his own officials saying that a vaccine would take well into 2021 at the earliest, Trump shrugged his shoulders and said he thinks his "own timetable will be more accurate".

2. Empty chair at the kitchen table

Biden had a major moment after Trump said the United States was learning to live with the pandemic. He warned of a "dark winter". Then he said: "People are learning to die with you".

The former vice-president then looked down the camera and continued: "Folks will have an empty chair at the kitchen table this morning. That man or wife going to bed tonight reaching over to try to touch their wife or husband who is gone.

"Learning to live with it … Come on."

In order to enforce the debate's rule, the Commission on Presidential Debates resorted to something familiar to a country operating by video conferences: The mute button.

Welker kept order in the house and the public got to hear from both candidates across the topics "Fighting COVID-19," "American Families," "Race in America," "Climate Change," "National Security" and "Leadership".

She had to use the mute button only once.

Trump paid a compliment to Welker that she was doing a good job. 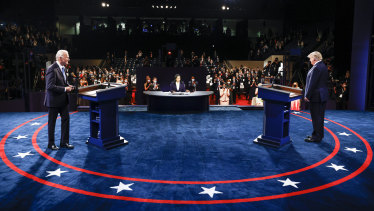 Trump and Biden on the debate stage.Credit:Reuters

Sitting presidents often fumble the first debate of their re-election. After four years in the White House, they're not used to being challenged. Both George W. Bush and Barack Obama did poorly in their first debates and then found their footing in the second debates.

This debate had a much more measured and deliberate Trump.

3. So, I called my accountants

It's the great tax return mystery.

For years the US President has promised the American public would see his tax returns soon. When asked about his much discussed tax returns, Trump goes all Blues Brothers when John Belushi tells Carrie Fisher why he didn't turn up to marry her: "There was an earthquake, a terrible flood, locusts. It wasn't my fault! I swear to God!"

When asked about his much promised tax return. Trump says: "So, I called my accountants."

"I'm going to release them as soon as we can. I want to do it, and it will show how successful, how great this company is.

"I asked them a week ago. I said, What did I pay, they should show you I pre-paid tens of millions of dollars I've pre-paid my tax….

"…I get treated very badly by the IRS very unfairly, but we had a deal done as soon as we're completed with the data, I want to release it, but I have paid millions and millions of dollars."

4. 'We should be talking about your families'

Trump spent a large part of the debate imploring the moderator and the public to look into the business dealings of the Biden family in the Ukraine and China, particularly the former vice president's son Hunter Biden.

It was widely expected that Trump would attack Biden’s son Hunter over (so far unfounded) claims of corruption relating Hunter’s business dealings.

In a bid to rattle the Democratic nominee, the Trump campaign announced just hours before the debate that a former Hunter Biden associate, Tony Bobulinski, would be one of the president’s guests at today’s event.

The move was reminiscent of a similar stunt Trump pulled in his debate against Hillary Clinton in 2016, when he entered with three women who’d accused Bill Clinton of inappropriate sexual behaviour.

But while Team Trump argued that Biden has “legitimate questions to answer”, this was nonetheless a risky strategy.

The President has his own questions to answer about China after The New York Times published a damning article revealing details about Trump’s business pursuits in China – including a previously unknown bank account.

It set up an opportunity for Biden to deliver the line:

"It’s not about his family or my family… we should be talking about your families."

5. Kill all the birds

The section covering climate change was among the most informative and divisive.

Biden's statement about increasing reliance on wind farms has Trump embarking on his dislike for them.

"We are energy independent, I know more about wind and you do, it's extremely expensive and kills all the birds," he says.

Biden responded that climate change is an immediate existential and moral crisis. He argued that heavily polluting industries including oil and gas will close over a transition period eventually.

Both candidates realise this is a big statement.

Trump shouts out to fossil fuel states like Texas, Pennsylvania and Oklahoma to remember this statement. Biden says high polluting industries will be replaced by renewables over time.