A version of this post was originally published on TKer.co.

I’m guessing you’ve seen a valuation chart that looks something like the one below.

If you haven’t, the message is simple: Five stocks (Facebook,¹ Apple, Amazon, Microsoft, and Google²) account for about a quarter of the market capitalization of the S&P 500, which consists of 500 companies. 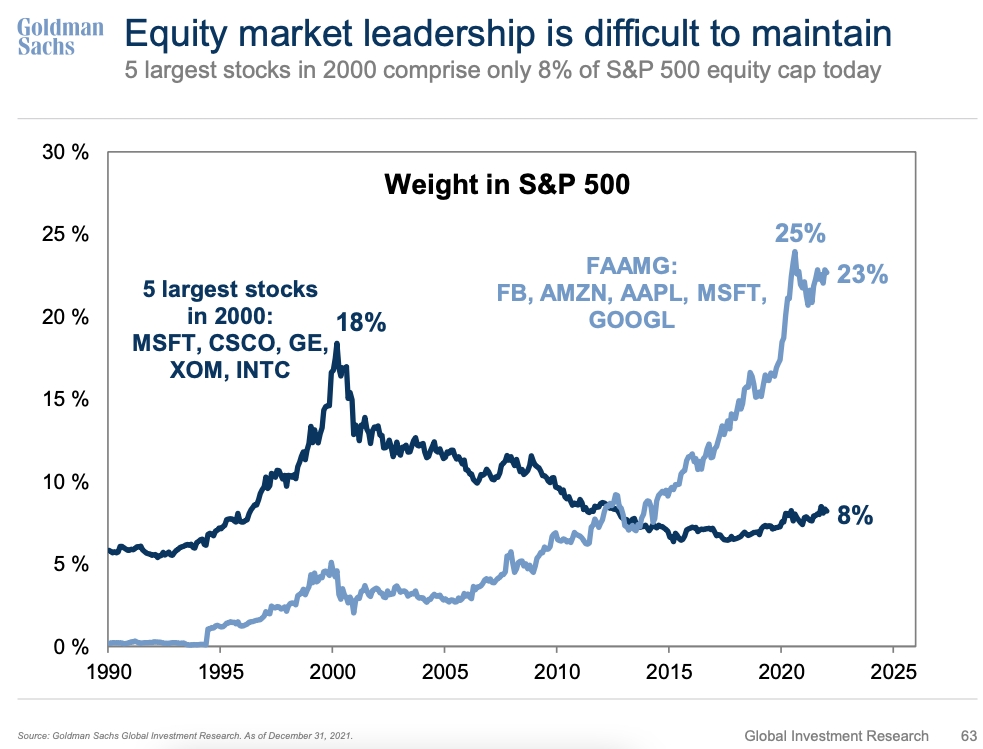 For context, the 20 smallest companies in the S&P 500 are each worth less than $10 billion.

The idea that 1% of the companies in the index account for about 25% of the total market value is jarring, and some folks see that as a vulnerability for the stock market.

In fact, companies used to represent even bigger shares of the market back in the day.

It’s imprecise to call them 5 companies

While it may be technically accurate to say these five stocks represent five companies, it’s also a gross oversimplification of the businesses and markets these companies are exposed to. 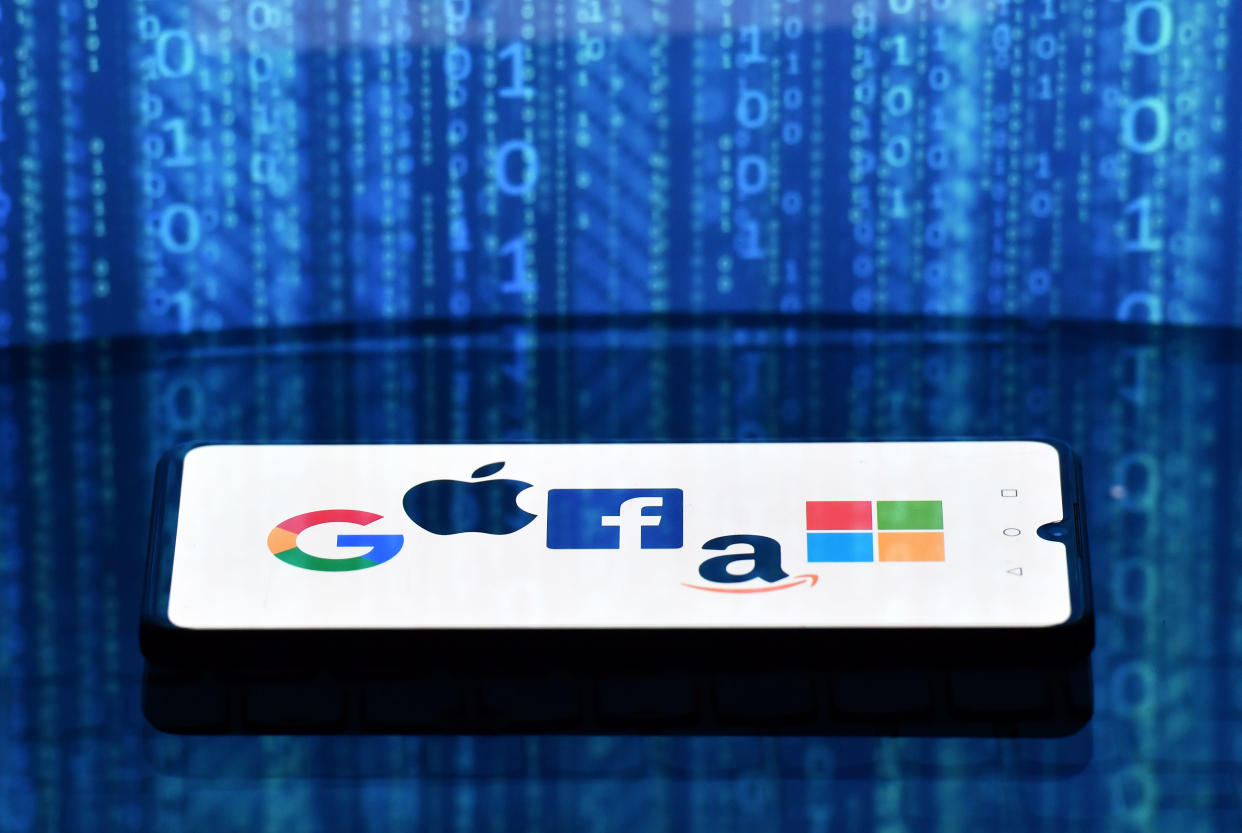 They make a ton of money

Importantly, these valuations are propped up by an ungodly amount of earnings.

Check out this chart of the big tech growth names, courtesy of Yardeni Research, which is a bit more up-to-date than the chart above. 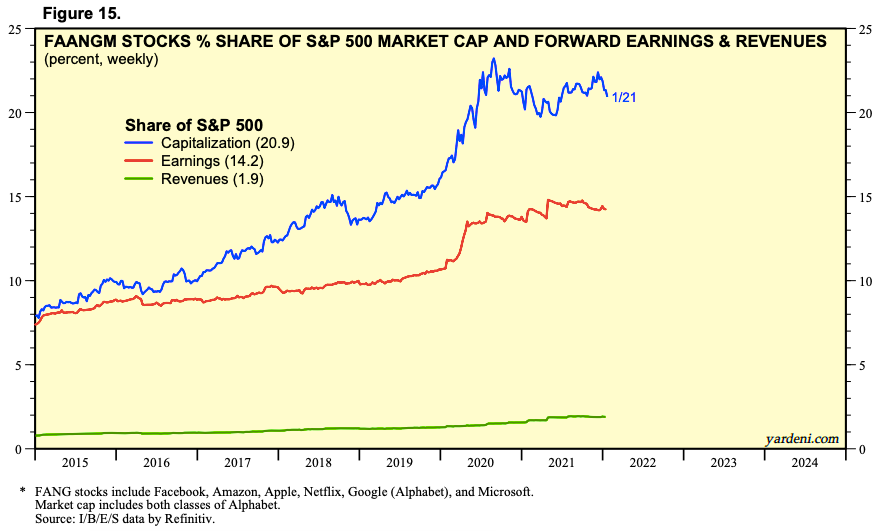 While these so-called FAANGM companies account for 1% of the names in the S&P 500, they account for a whopping 14% of the index’s earnings.

Note: These stocks represent about 21% of the index, which is a greater percentage than the 14% of earnings that they are responsible for. There’s a lot of reasons why this may be the case. Generally speaking, it’s not unusual for investors to pay a premium for tech stocks, high-growth stocks, and market-dominating stocks. The bottom line is they represent a huge share of the market cap and they generate a huge share of the earnings.

From an investor’s perspective, the worst case scenario may be that these companies get broken up, in which case they might lose some of the benefits of scale. But even in a break-up, investors would either be left with shares of the broken up company or they’d be bought out.

Like the S&P 500, the biggest five stocks in the U.S. market attract raise eyebrows because of the trajectories of their prices. But a closer look at things like business diversification and earnings show that these concerns may be a bit overblown.

Most of my savings sit in equity mutual funds and ETFs that track the S&P 500, which means I’m significantly exposed to the companies mentioned above. None of these companies pay me. However, literally every person I know — including myself — regularly does business with at least several of these companies in multiple ways.

I use an iPhone (AAPL) and everyone I know is either on an iPhone or an Android (GOOGL) phone. I use WhatsApp (FB) to communicate with people overseas. Amid the pandemic, I’ve been using Google Meet (GOOGL) and Microsoft Teams (MSFT) a lot more.

For work, I mostly use Chrome (GOOGL) on my MacBook Air (AAPL). I work with a lot of data, though I don’t have Office (MSFT). When someone sends me an Excel file (MSFT) I open it with Sheets (GOOGL). My website is powered by AWS (AMZN), though when there’s an outage I can’t help but be envious of those using Azure (MSFT). And when you subscribe to TKer, the GIF in the welcome email was created on GIPHY (FB).

When I publish, I share my work on LinkedIn (MSFT). Facebook (FB) is a much bigger platform for sharing content generally, but their algorithm doesn’t seem to pick up my stuff. Though lately, I’ve noticed my pieces have been surfacing in Google Search (GOOGL) results. Yahoo Search doesn’t seem to be sending me much traffic, though I’ll note that Yahoo Search is actually powered by Bing (MSFT). 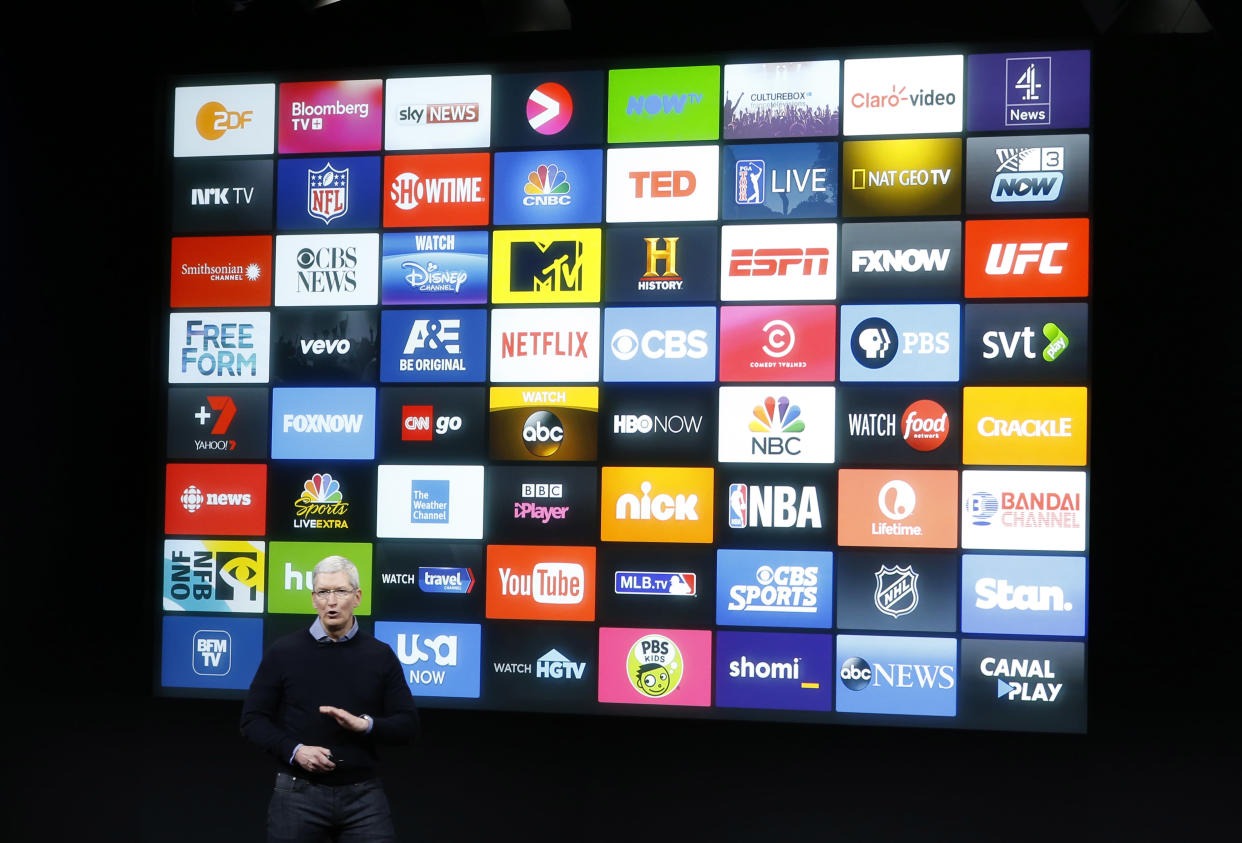 In my free time, you might catch me scrolling through Instagram (FB) while I’m streaming something from Apple TV+ (AAPL) or Prime Video (AMZN). Yes, I have subscriptions to Netflix and Hulu, though I stream it all through my Apple TV (AAPL) hardware.

I have an Echo Dot (AMZN) and Echo Show (AMZN), but I only ever use them to set timers and turn my lights on and off. I don’t use Siri (AAPL), but my sister uses it to send text messages while driving. I don’t use Nest (GOOGL) or Ring (AMZN), but my homeowner friends seem to be fans of one or the other.

For online shopping, I’m hooked on Amazon (AMZN) like everyone else. I will, however, say that Apple Pay (AAPL) and Google Pay (GOOGL) have made it a lot easier to conduct transactions on other sites.

Just to be clear, everything about me isn’t wired. I wear a mechanical watch. You won’t be able to convince me to get an Apple Watch (AAPL) or FitBit (GOOGL).

Also, I do get outside. I’ll pop in my AirPods (AAPL) and walk to the Whole Foods (AMZN) in downtown Brooklyn where I get groceries. It’s a block past the Apple Store (AAPL), but a block before the Best Buy where the new Xbox (MSFT) has been sold out for weeks – though, they do have the extremely popular Oculus 2 (FB) in stock.

When I vacation, I like secluded beaches far from any Wi-Fi or cellular signal. But even out there, I’ll see people on their Kindles (AMZN) and iPads (AAPL).

AT&T (T) used to be my wireless carrier before I switched to Verizon a few years ago. In high school, I drove a 1979 Chevy Impala station wagon (GM). I now live in NYC, where I don’t have a car.

📈 Stock market rollercoaster:The stock market experienced an explosion of volatility last week. (Read more here.) But when it was all said and done, the S&P 500 ended the week up 0.8%. ⏳ As always, there will be changes here and there in the variables that drive long-term returns in the market, which may lead to run-of-the-mill big sell-offs the market sees in an average year. That’s generally not a problem for long-term investors since sell-offs are healed with time. 🤔 Occasionally, we’ll get a major surprise that no one sees coming that will challenge how we think about the long-term. But that wasn’t the case this week.

📈 Interest rate hikes are coming: The Federal Reserve gave its clearest signal yet that it intends to begin hiking short-term interest rates (via the federal funds rate) at its March policy meeting as it unwinds its emergency monetary policy. From its FOMC policy statement: “With inflation well above 2 percent and a strong labor market, the Committee expects it will soon be appropriate to raise the target range for the federal funds rate.“ And from Fed Chair Jerome Powell’s press conference on Wednesday: “I would say the committee is of a mind to raise the federal funds rate at the March meeting assuming that conditions are appropriate for doing so.”

…🧐 Why? Inflation: The Fed’s favorite measure of inflation — the core PCE price index — jumped by 4.9% in December from a year ago, the largest increase since 1983. The closely watched employment cost index was up 4% in the 3-months ending in December, the biggest gain since 2001. These are among the reasons why the Fed has been getting aggressive. For more on why the Fed is tightening monetary policy, read this.

🛍 Spending slowed in December: Consumer spending fell by 0.5% in December from the month prior. From JPMorgan’s Daniel Silver: “We think the spread of the Omicron variant depressed spending that month and that this virus-related drag will be relatively short-lived.“ For more on Omicron’s disruptive impact, read this.

🛠 And business activity has been slowing in Jan: According to IHS Markit surveys conducted in this month, manufacturing and services sector purchasing managers say growth slowed to an 18-month low. 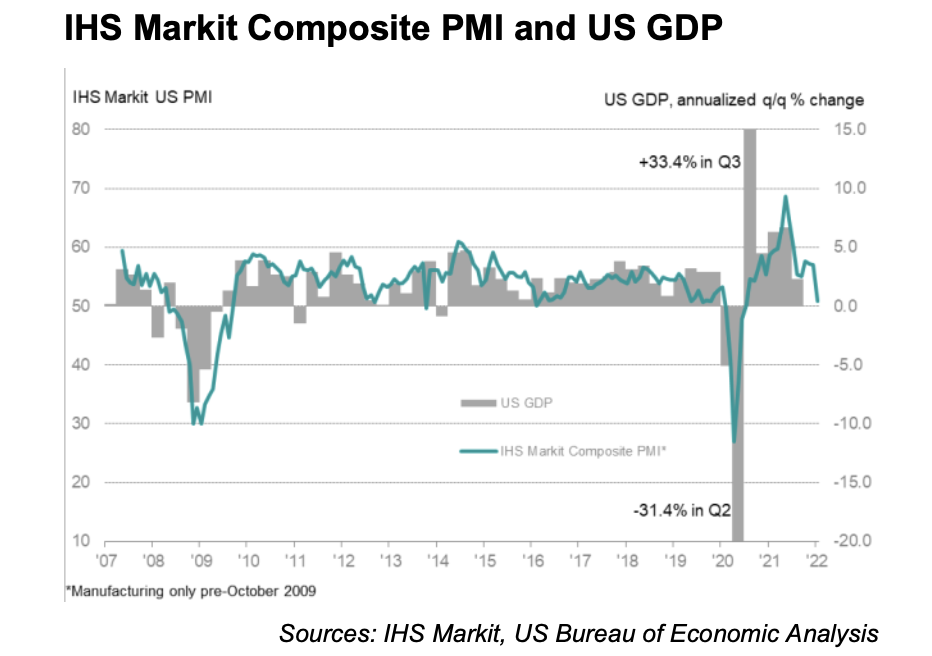 … ⛓ But there’s good news: Supply chain issues seem to be easing and inflation appears to be cooling. From Markit: “…the overall rate of supply chain deterioration has eased compared to that seen throughout much of the second half of last year. This has in turn helped lift manufacturing optimism about the year ahead to the highest for over a year, and has also helped bring the rate of raw material price inflation down sharply. Thus, despite the survey signaling a disappointing start to the year, there are some encouraging signals for the near-term outlook.“

🏘 Mortgage refinancings drop: Mortgage refinance activity plunged 13% from a week ago and 53% from a year ago as long-term interest rates have moved higher, according to the Mortgage Bankers Association. According to the MBA’s Joel Kan: “Unsurprisingly, borrower demand for refinances subsided, with applications falling for the fourth straight week. After almost two years of lower rates, there are not many borrowers left who have an incentive to refinance.“ 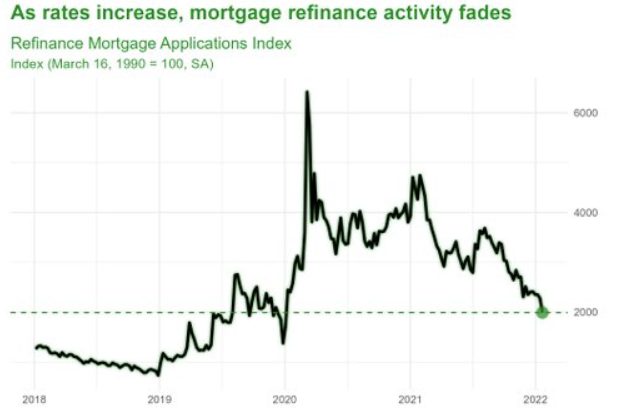 All eyes will be on the January jobs report, which comes out on February 4. The consensus estimate sees U.S. employers having added 178,000 jobs during the month, though some economists think jobs were lost. From Bank of America: “We forecast nonfarm payrolls fell by 150k in January owing largely to the quarantine effect of the Omicron variant on hourly workers.” 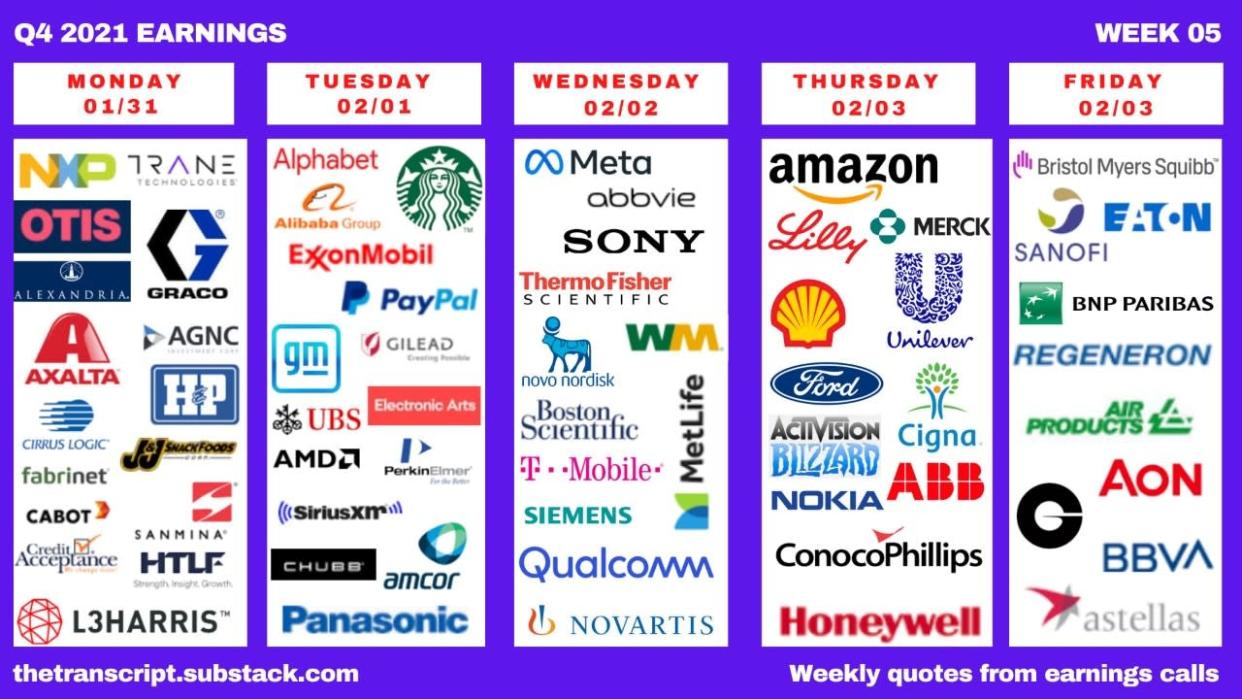 ¹ As of October, Facebook is more formally known as Meta.

² Google is more formally known as Alphabet. Really, what’s in a name?

A version of this post was originally published on TKer.co.