Five Vatican employees, including a monsignor and the second in command of the Pope’s finances, have been suspended following a police raid.

According to an Italian magazine a series of top officials were handed police notices.

These included the number two at the Vatican’s Financial Information Authority (AIF) and a monsignor, the Italian magazine L’Espresso reported.

The scandal, affecting two departments at the heart of the Vatican, was the first after several years of relative calm in which reforms enacted by Pope Francis appeared to be taking root. 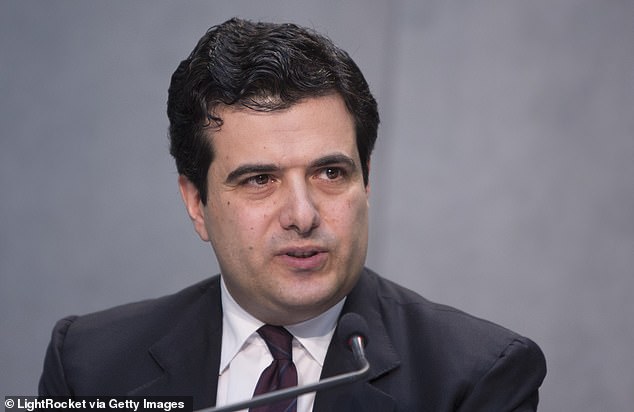 Tommaso Di Ruzza, president of the Financial Information Authority (AIF) of Vatican City, was one of five employees suspended after a police raid

On its website, L’Espresso published a picture of a police notice to guards at Vatican gates telling them not to allow in the five employees because they had been suspended.

The notice included photographs of the five, one of whom is a woman.

The people whose pictures were on the notice included Tommaso Di Ruzza, the director of the AIF, and Monsignor Mauro Carlino, the head of documentation at the Secretariat of State.

The other three held minor roles in the Secretariat of State, the key department in the Vatican’s central administration.

Calls to Di Ruzza’s cell phone went unanswered. The other officials were not immediately available to be contacted.

A senior Vatican source said he was aware of the suspension of four employees from the Secretariat of State but not of Di Ruzza’s suspension.

A Vatican spokesman said he had no immediate comment on the report. 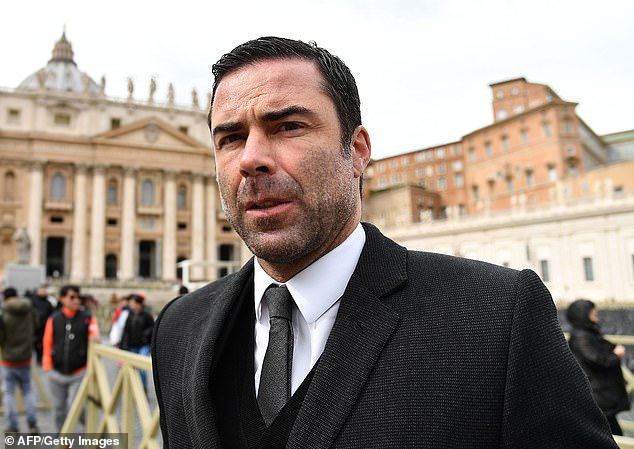 Swiss Rene Bruelhart, president of the Board of Directors of the Financial Information Authority (AIF) of Vatican City has authority over all Vatican departments. He is one of five Vatican employee suspended

Vatican police raided both offices on Tuesday and seized documents and electronic devices as part of an investigation of suspected financial irregularities.

Tuesday’s raid is believed to be the first time the two departments were searched for evidence involving alleged financial crimes.

The Secretariat of State, the most powerful department in the Vatican, is the nerve centre of its bureaucracy and diplomacy and the administrative heart of the worldwide Catholic Church.

The AIF, headed by Swiss lawyer Rene Bruelhart, Di Ruzza’s boss, is the financial controller, with authority over all Vatican departments.

In a statement on Tuesday, the Vatican said the operation was a follow-up to complaints filed in the summer by the Vatican bank and the Office of the Auditor General and were related to ‘financial operations carried out over the course of time’.

Since Francis’ election in 2013, the Vatican has tried to clean up its financial reputation. 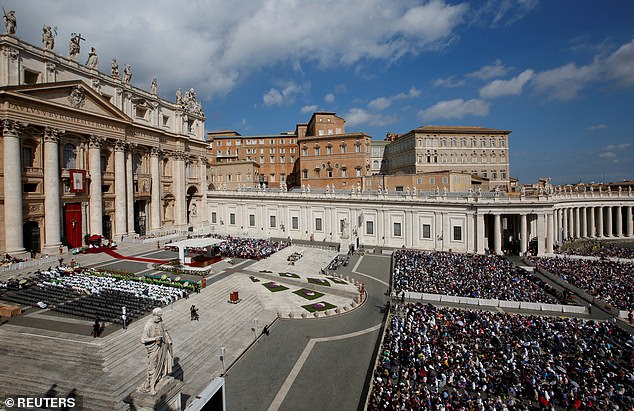 Mass being held by Pope Francis at the Vatican last month. Vatican police put up notices on the gates yesterday telling guards not to allow in the five employees as they had been suspended

Last year, a former head of the Vatican bank and an Italian lawyer went on trial to face charges of money laundering and embezzlement through real estate deals. It is still in progress.

The AIF said in May that reports of suspicious financial activity in the Vatican reached a six-year low in 2018, continuing a trend officials said showed reforms were in place.

The bank, officially known as the Institute for Works of Religion, or IOR, was for decades embroiled in numerous financial scandals as Italians with no right to have accounts opened them with the complicity of corrupt insiders.

Hundreds of IOR accounts were closed at the bank, whose stated purpose is to manage funds for the Church, Vatican employees, religious institutes or Catholic charities.

Italy put the Vatican on its ‘white list’ of states with cooperative financial institutions in 2017, ending years of mistrust.

Moneyval, a monitoring body of the Council of Europe, gave Vatican financial reforms a mostly positive evaluation in a review the same year.