Washington:  US Vice-President Mike Pence plans to have his first meeting with Venezuela's Juan Guaido in Colombia on Monday (US time) in a signal of support for the opposition leader after a weekend of violence.

The violence could lead the United States to impose new sanctions as early as Monday to cut off the Maduro government's access to revenue. 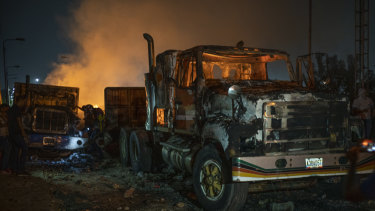 Burnt trucks previously loaded with humanitarian aid sit on the Francisco De Paula Santander International Bridge near the border with Venezuela in Cucuta, Colombia, on Saturday.Credit:Bloomberg

The United States and allies are looking at ways to expel family members of Venezuelan military officials who are living outside the country, including some in south Florida, the official said.

Maduro has denied there are shortages of food and medicine in Venezuela, and says the aid is aimed at undermining his government.

Guaido says he will ask the international community to keep "all options open" in the fight to oust  Maduro.

Late on Saturday, the opposition leader tweeted, "Today's events have obliged me to take a decision: to propose in a formal manner to the international community that we keep all options open to liberate this country which struggles and will keep on struggling."

Guaido, who declared himself interim president, is recognised as so by the US and some 50 nations. 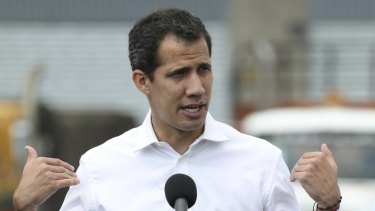 Throughout the turbulent day, as police and protesters squared off on two bridges connecting Venezuela to Colombia, Guaido made repeated calls for the military to join him in the fight against Maduro's "dictatorship".

Colombian authorities said more than 60 soldiers answered his call, deserting their posts in often-gripping fashion, though most were lower in rank and didn't appear to dent the higher command's continued loyalty to Maduro's socialist government.

In one dramatic high point, a group of activists led by exiled politicians managed to escort three flatbed trucks of aid past the halfway point into Venezuela when they were repelled by security forces.

In a flash the cargo caught fire, with some eyewitnesses claiming the National Guardsmen doused a tarpaulin covering the boxes with petrol before setting it on fire. As a black cloud rose above, the activists – protecting their faces from the fumes with vinegar-soaked cloths – unloaded the boxes by hand in a human chain stretching back to the Colombian side of the bridge.

"They burned the aid and fired on their own people," said 39-year-old David Hernandez, who was hit in the forehead with a tear gas canister that left a bloody wound and growing welt. "That's the definition of dictatorship." 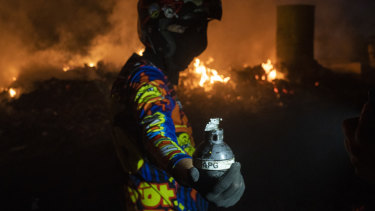 A demonstrator holds a grenade on the Francisco De Paula Santander International Bridge near the border with Venezuela in Cucuta, Colombia, on Saturday.Credit:Bloomberg

In all, 285 people were injured and 37 hospitalised on the Colombian side of the border, according to Colombia's foreign minister. At least four were killed on the Venezuela-Brazil border after clashing with pro-government militias.

In the Venezuelan capital, Caracas, the embattled Maduro danced at a pro-government rally, mocked the United States and broke off ties with neighbouring Colombia.

Late in the day, Venezuelan navy vessels threatened to open fire on a ship carrying aid from Puerto Rico, Governor Ricardo Rossello said. He said he had ordered the vessels to abandon the area temporarily, decrying the threat as "unacceptable".

For weeks, US President Donald Trump's administration and its regional allies have been amassing emergency food and medical supplies on three of Venezuela's borders with the aim of launching a "humanitarian avalanche." It comes exactly one month after Guaido, in a direct challenge to Maduro's rule, declared himself interim president at an outdoor rally.

Even as the 35-year-old politician has won the backing of more than 50 governments around the world, he's so far been unable to cause a major rift inside the military – Maduro's last-remaining plank of support in a country ravaged by hyperinflation and widespread shortages.