New York: In 2005, Dennis Keen, a high school junior in Los Angeles, was applying for a summer exchange program. After not much deliberation, he decided it would be punky and funny to forgo France and Spain and go to Kazakhstan.

"People didn't know where it was," Keen said. "In Kazakhstan, there's pre-Borat and post-Borat." 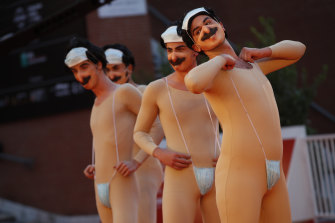 Performers impersonating Borat arrive for the red carpet for the movie “Borat” at the Rome Film Festival on Friday.Credit:AP

He is referring, of course, to Borat: Cultural Learnings of America for Make Benefit Glorious Nation of Kazakhstan, the Sacha Baron Cohen comedy that hit theatres in 2006. In the movie, Cohen pretends to be a television reporter visiting America from the former Soviet republic, whose people supposedly drink horse urine, consider women property and celebrate an anti-Semitic version of the running of the bulls. (The bulls are replaced by Jews.) The authoritarian Kazakh government banned the film, threatened to sue Cohen and took out a four-page advertisement in The New York Times newspaper defending the country's honour.

And so when Cohen released a trailer on September 29 for a Borat sequel, which he developed in secret and which debuted on Amazon on Friday, the satirist was prepared for another fight with the Kazakh government.

"It was like, 'Oh, again?'" said Kairat Sadvakassov, deputy chairman of Kazakhstan's tourism board, who has a master's degree in tourism management from New York University. 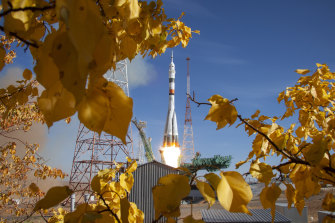 A rocket booster with a Russian spaceship carrying a new crew to the International Space Station (ISS) blasts off at the Baikonur cosmodrome, Kazakhstan, on October 14.Credit:Roscosmos

The board was determined to avoid overreacting and letting Cohen make it look foolish once again.

"The decision was made to let it die its natural death and not respond," Sadvakassov said.

Then Keen, the former exchange student, got involved. After his time abroad, he went on to graduate school at Stanford, where he studied with a professor from Kazakhstan. Keen eventually moved to the country, married a local and started a business giving walking tours of Almaty, the country's largest city. He now hosts a travel show on a state television channel. ("I'm kind of like the American Borat," Keen said.)

When Keen learnt about the sequel, he thought that rather than ignore Cohen, Kazakhstan should embrace the Borat character's catchphrase and turn it into the country's tourism slogan: "Kazakhstan. Very nice!"

It's the kind of idea you get when you own a tourism company and a pandemic has annihilated tourism.

"I've had a lot of free time," Keen said. "Also, I just had a baby. When he grows up, I don't want him to be ashamed of Borat. I want him to say, 'That's when my dad started this whole fun project.'"

Two weeks ago, Keen and a friend, Yermek Utemissov, who helps foreign film companies arrange shoots in Kazakhstan, pitched an idea to the board of tourism. They got an immediate 'yes'. The two worked pro bono to make four slickly produced, internet-friendly 12-second spots featuring people walking around Kazakhstan and observing that it's "very nice". In one, a man at a market drinks traditional fermented horse milk (not horse urine) and says: "That's actually very nice".

The new movie, Borat Subsequent Moviefilm: Delivery of Prodigious Bribe to American Regime for Make Benefit Once Glorious Nation of Kazakhstan," doesn't let up on stereotyping the nation. It starts with Borat doing hard labour in prison, explaining the fictional consequences of the original film in a voice-over: "Kazakhstan become laughing stocks around the world. Our exports of potassium and pubis plummet. Many brokers leapt from our tallest skyscrapers. Since Running of Jew had been cancelled, all Kazakhstan had left was Holocaust Remembrance Day, where we commemorate our heroic soldiers who ran the camps."

But Utemissov said he wasn't worried that his fellow citizens would get mad this time.

"It's a newer generation," he said. "They've got Twitter, they've got Instagram, they've got Reddit, they know English, they know memes. They get it. They're inside the media world. We're looking at the same comedians, the same Kimmel show. Kazakhstan is globalised."

Sadvakassov, the deputy chairman of the tourism board, hadn't seen the movie before its premiere, but he said he wasn't concerned, either.

"In COVID times, when tourism spending is on hold, it was good to see the country mentioned in the media," he said. "Not in the nicest way, but it's good to be out there. We would love to work with Cohen, or maybe even have him film here."

When Cohen learnt that Kazakhstan had reversed itself and embraced his franchise, he offered a statement by email.

"This is a comedy, and the Kazakhstan in the film has nothing to do with the real country," he wrote. "I chose Kazakhstan because it was a place that almost nobody in the US knew anything about, which allowed us to create a wild, comedic, fake world. The real Kazakhstan is a beautiful country with a modern, proud society — the opposite of Borat's version."

That's as close as Borat gets to being very nice.