Iraq war veteran, 40, is furious that Burger King staff told him he ‘was not allowed in’ because he was with his PTSD support dog Ziggy

An army veteran was left furious after a Burger King employee told him ‘he was not allowed in’ because he had a PTSD support dog.

Richard Mearns, 40, had been visiting the fast-food branch in Waterloo Station, London, when he claims a member of staff told him to ‘get out’, despite him pointing out his dog Ziggy’s bright blue ‘Assistance Dog’ jacket.

The father-of-one, who was a combat medical technician for the British Army in Iraq, demanded to see the manager, who he claims also informed him they ‘only allow guide dogs’.

And when Mr Mearns, from Croydon, south London, explained this was incorrect, he claims he was only given a ‘grunted apology’, which left him feeling deeply upset.

The army veteran, who described his canine as an ’emotional support’, is now calling for Burger King to ensure all of their staff are fully trained on assistance dogs so that no one else in his position is left as ’embarrassed’ again. 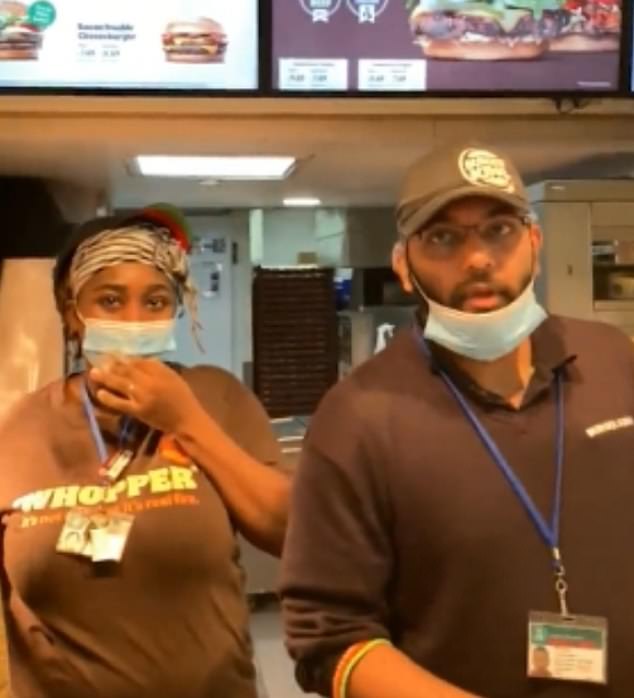 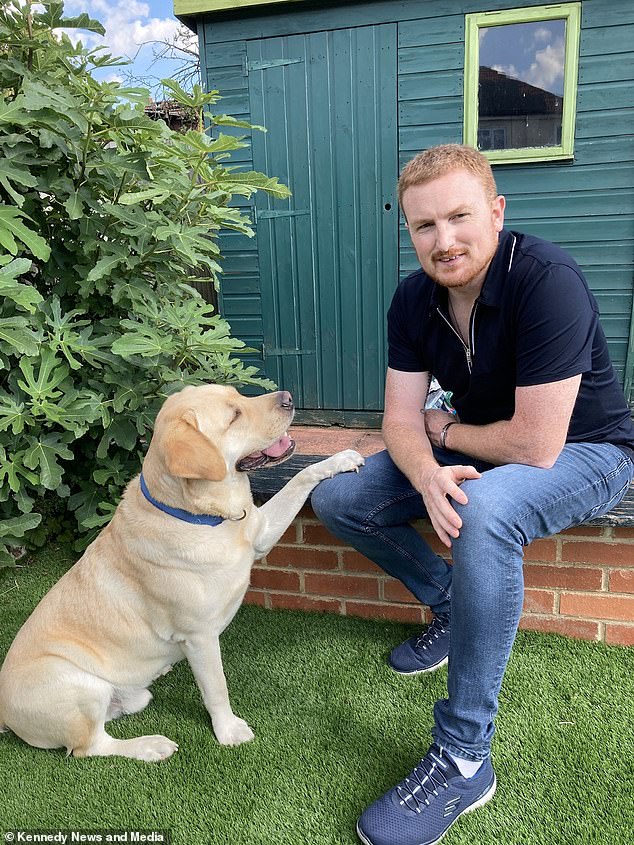 Father-of-one, who was a combat medical technician for the British Army in Iraq, is now calling for Burger King to ensure all of their staff are fully trained on assistance dogs

In a video shared online by Mr Mearns, the employee can be heard talking to his manager, as he says: ‘I told him that no dogs are allowed, so he wants to speak to you.’

Mr Mearns then challenges the server and asks: ‘Excuse me, can I clarify why dogs aren’t allowed?’

Burger King said they were investigating the incident but reassured customers that the ‘use of assistance dogs is permitted across all of their UK restaurants’.

SSP, who operate the Burger King at Waterloo, apologised for the incident and said one of their staff ‘did not realise the customer in question required special assistance’.

Mr Mearns, who was diagnosed with PTSD in 2009, said: ‘I was waiting, and the bloke behind the counter looked at me and the dog, before saying ”you need to get out because there’s no dogs allowed in here”.

‘I was dumbfounded. I went up to challenge him saying ”woah, hold on a second. Ziggy’s not there cocking his leg up, he’s wearing a jacket that says ‘Assistance Dog’. You don’t need any more clarity than that.”

‘Ziggy, for me, is my Post-Traumatic Stress Disorder assistance dog, and my PTSD is from my time as a combat medic in the army.

‘I was questioning why he was asking me to leave when I’d paid for my food and made it clear that this was my assistance dog. He was wearing a jacket and harness which clearly said ‘Assistance Dog’ on it.

‘He came back and said ”this is a food venue, so there’s no dogs allowed in here”.

‘That’s when I said, ”You need to get your manager. You’re wrong and that’s not on”.’

‘He went to the manager and said ”I told him to leave. I told him that no dogs are allowed, so he wants to speak to you.” It was just the attitude from it.

‘He was so disgruntled to have to go and get the manager. It just shows there was no compassion, no implementation of any training, and a complete lack of awareness.

‘It’s just sickening. It causes me such angst and stress. I tweeted out the video of it because it really p***ed me off.’

When the manager came over, Mr Mearns claims he was given an unsatisfactory apology. 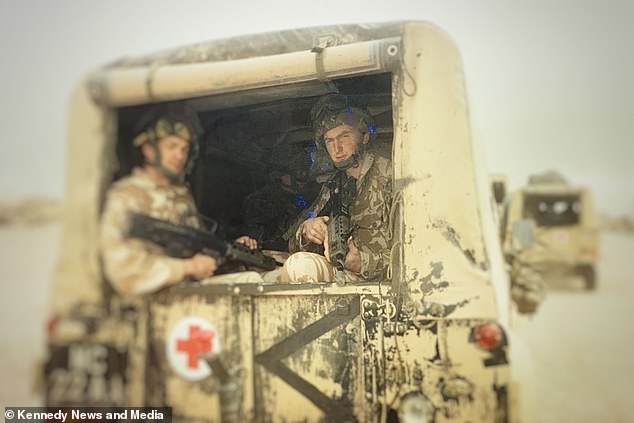 Mr Mearns served in the British army as a combat medical technician from 2001 to 2005, and was deployed to Iraq in 2003. His experiences in Iraq led to him being diagnosed with PTSD in 2009 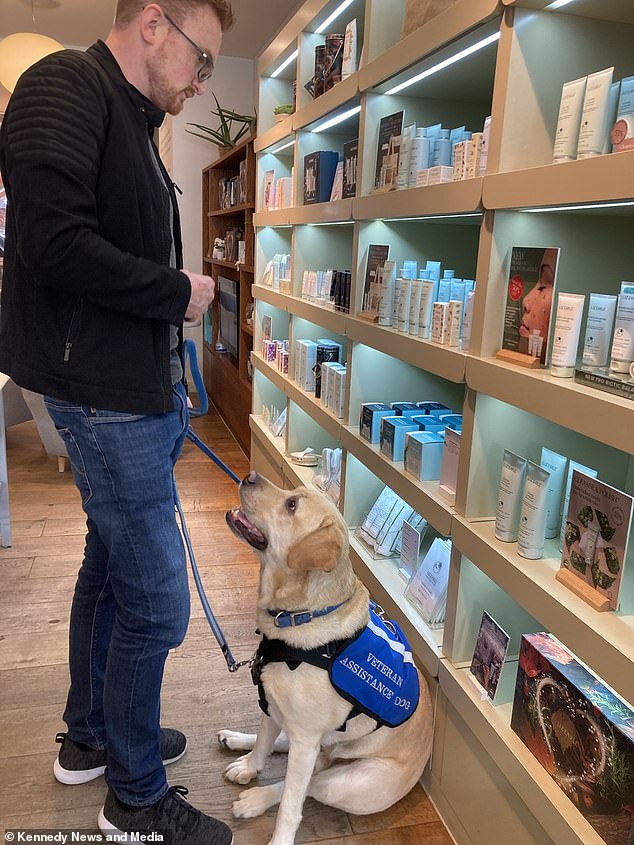 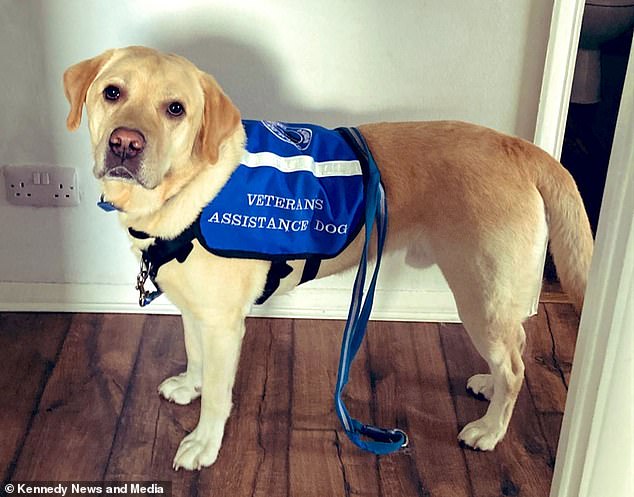 He said: ‘The manager came round, but they were talking together. I was very much on the outside of this conversation, as I was trying to explain this was my assistance dog.

‘The first words out of the manager’s mouth were ”we only allow guide dogs”, which is obviously incorrect.

‘I said, ”look, he is an assistance dog”, and they were talking about it to each other like I wasn’t there.

Dogs can offer numerous forms of support to PTSD sufferers and also aid in their recovery.

PTSD assistance dogs are trained to help with nightmares, flashbacks, zoning out and anxiety and panic attacks.

Sufferers have also noted feeling calmer, more confident and less down and agitated with the help of the canines.

The dogs are trained to do work or perform tasks directly related to a psychiatric disability. For example, they can be trained to detect a veteran’s physical signs of anxiety and distress and interrupt them.

Thousands of disabled people rely on an assistance dog to help them with day-to-day activities.

They are often recognisable by a harness or jacket.

Assistance/Guide dog owners have the same rights as everyone else to use the services supplied by shops, banks, hotels, libraries, pubs, taxis and restaurants under the 2010 Equality Act (EA).

‘But the manager was talking to him about dogs and whatever, and he was grunting. It was clearly for show. They were ignoring me.

‘I said ”I just want this bloke to apologise to me. That’s all I’m after. I shouldn’t have to justify my existence.”

‘His apology was like Kevin and Perry…very much a grunted apology.’

He added: ‘They clearly didn’t care. It was that disconnect that made me feel so riled about it. Why is it okay to embarrass somebody in a crowded area like this?

‘I got my food and left – the food was as bad as the treatment. That really put the cherry on the cake.’

Mr Mearns now wants corporations like Burger King to lead by example when it comes to accepting assistance dogs into establishments.

‘Burger King may say they have a policy of accepting all assistance dogs, but if staff aren’t trained properly, it has a significant mental impact on me.

‘The first thing you should hear from a business – no matter what – is ”Hi, how can I help you?” or ”Do you need any help today?”, not ”No dogs allowed”.

‘Companies go about with all this ”Be Kind” stuff, but then stuff like this happens. The individual was surly, but he was surly because he thought he was right. He thought that because nobody trained him to be aware he was wrong.

‘It’s interesting because there seems to be a lot of awareness about assistance dogs, but when it comes to frontline staff, it’s almost like they forget.

‘When it comes to corporations, I strongly believe they rely on ”We allow assistance dogs and guidance dogs because we have to” whilst not putting out any obvious training. Because if they did, it’s not something you’d forget because it’s so simple.

‘I think it’s down to a lack of training. Somebody once said we need the government to change the law. But most people aren’t reading legislation. What we need to do is be better as a society and challenge this open discrimination.

‘And the best way to challenge it is for big corporations like Burger King to set an example. They should hold up their hands and say we can fix this together.’

The father-of-one served in the British army as a combat medical technician from 2001 to 2005, and was deployed to Iraq in 2003.

His experiences in Iraq led to him being diagnosed with PTSD in 2009, however he was given Ziggy in 2016 to provide him with support.

Mr Mearns said: ‘Before I got him, I was on a downward spiral. I was diagnosed with PTSD in 2009 and I prepared and planned my suicide in 2010. I was within moments of doing it.

‘It was only in a flash of light moment that I realised that I needed to turn around, stop and not do it. We’re 11 years on and I’m still here.

‘I want to use that dark period to encourage other people to talk. So when stuff like this happens, it knocks my confidence back.

‘Ziggy’s not just a dog. Somebody once described him as my emotional prosthetic. He assists me with my day-to-day stuff and allows me to do what I do.

‘Ziggy has turned my life around. I’ve gone from having a significant number of flashbacks a week to maybe one or two a month, if that.

‘He is an emotional support, and he actively carries out tasks, including grounding me when things get extremely stressful. It’s a bond that makes what is in essence a life.’

A spokesperson for Burger King said: ‘Burger King is firmly committed to providing an inclusive environment for all our guests and team members and our official policy states that we fully welcome guests with assistance dogs into our restaurants.

‘At Burger King we take all allegations extremely seriously and are investigating this incident internally. We are continuing to liaise with the restaurant and its management team about this matter and in the meantime will also ensure that all team members at this restaurant will participate in a training refresher.

‘We would like to reiterate and reassure our customers that use of assistance dogs is permitted across all of our UK restaurants.’

A spokesperson for SSP, who operate the Burger King at Waterloo, said: ‘We strive to provide a great experience to all of our customers, and we’re disappointed that we fell short on this occasion.

‘Assistance pets are welcome in all of our units; however, unfortunately, one of our colleagues did not realise the customer in question required special assistance.

‘Though the team leader and the colleague did apologise at the time, we would also like to add our apology on behalf of the business. We will be looking to contact the customer directly to understand any further concerns, and in the meantime, we will be reminding all our teams of our policies on assistance pets.’