While Australians have understandably been fixated on the terrible drought on our own continent, spare a thought for the plight facing the next continent to the left.

This writer can recall, some years ago, standing in the rainforest at the lip of the Victoria Falls wearing a raincoat so as not to get soaked by the spray from the natural wonder known as "The Smoke that Thunders". 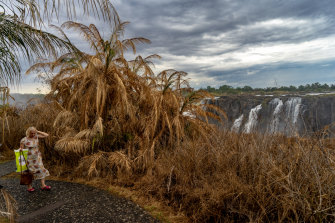 A tourist walks along a path in the dried rainforest at the Victoria Falls in November. A series of heatwaves has dried most of the vegetation surrounding the UNESCO world heritage site.Credit:AFP

The Victoria Falls, Africa's biggest, lies between the southern African nations of Zambia and Zimbabwe. It is formed as the waters of the Zambezi River plummet over a precipice 1.7 kilometres wide by more than 100 metres deep.

But now, the cliffs, hidden behind an avalanche of water when the river is in full flow, stand naked.

While the falls have not run completely dry, Elisha Moyo, principal climate change researcher at Zimbabwe’s Ministry of Environment, Climate and Tourism, has sounded a dire warning.

Speaking to the BBC News’ Stephen Sackur, Moyo said the average flow of water over the falls this year was down by almost 50 per cent. The falls are known to dry up on the Zambian side in the dry season, but this year has been the worst since 1996. 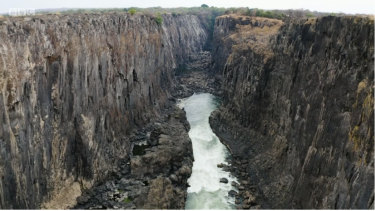 A screen grab of the bare cliff faces of the Victoria Falls, as the BBC’s Stephen Sackur reports.Credit:BBC News

Normally, 2000 cubic metres of water a second passes over the falls but the average this year was 1200, he said.

He said it was a serious possibility that the falls could run dry.

"The low falls are becoming more frequent … Who knows? Maybe one year there will be no falls completely, no water."

He also said the low flows were affecting animals down and upstream as well as hydro-electricity generation in both countries. 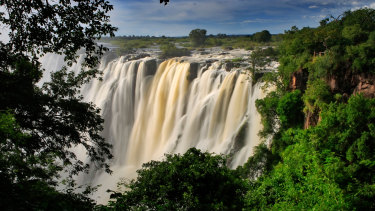 The Victoria Falls when in full flow.Credit:Alamy

The Sydney Morning Herald and The Age have approached Moyo for comment.

Southern Africa has been gripped by drought for a number of years.

The World Food Program says the region has received normal rainfall in just one of the past five growing seasons, with small-scale farmers feeling it most.

South Africa's Northern Cape province has been hit particularly hard with many farmers struggling to keep their families and animals alive.

In 2018, Cape Town prepared for “Day Zero” when the dam levels were tipped to drop so low that water supplies would have been switched off. The threat eased as rains returned.

But, further north, the rains are staying away.

Last month, Zambia's President Edgar Chagwa Lungu tweeted: "These pictures of the Victoris [sic] Falls are a stark reminder of what climate change is doing to our environment and our livelihood.

"It is with no doubt that developing countries like #Zambia are the most impacted by climate change and the least able to afford its consequences."

Meanwhile, at the other end of the continent, flooding has hit Djibouti in East Africa, where the government and United Nations said last week the equivalent of two years' rain fell in a day, affecting a quarter of a million people.

Several countries in the region, including Kenya, are struggling after heavy rains, with more to come.

Djibouti has been called one of the world's most vulnerable non-island nations in the face of climate change as sea levels rise. Neighbouring Somalia has been hit hard by recent flooding as well.

In Kenya, the government said 120 people have been killed in flooding and mudslides during an unusually severe rainy season.