Victoria’s business lobby wants major changes to the state’s tax system and a new approach to budgeting, saying the post-COVID period is the perfect time to dump stamp duty and reform payroll tax and other charges.

The Victorian Chamber of Commerce and Industry’s state budget submission, sent to the government this week, also outlines a plan to get international students back into the state in significant numbers, with the chamber arguing their absence leaves a $13 billion hole in the economy. 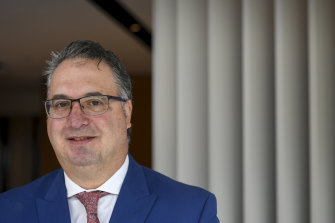 VCCI’s submission urges Treasurer Tim Pallas to revisit the idea, which has been ruled out for the foreseeable future, of abolishing stamp duty – which levies tens of thousands of dollars on property purchases – and replacing it with a broad-based property tax.

The chamber’s chief executive Paul Guerra told The Age on Tuesday that the current ultra-low interest rates offered the government a cut-price way to cover the short-term revenue hole left by stamp duty while the replacement charge was gradually phased in.

Mr Guerra said a failure to act risked Victoria being left behind by Australia’s other big state economy, NSW, which, along with the ACT, has a plan to dump what the chamber calls the “inefficient and market distorting tax”.

“We know NSW is moving down this path and we can’t be left in their wake,” Mr Guerra said.

“We know housing will be a determinant of the ability to attract business and therefore employment and we know it’s one of the decision points in liveable cities and Victoria, Melbourne, needs to keep that high on our agenda.”

The VCCI said the key to stamp duty reform was to dump the traditional practice of budgeting for a four-year “forward estimates” period, and instead produce an annual fiscal planning document for the following 10 years.

“This will allow government to better plan and book long-term expenditure and savings on economic and social policy and provide longer-term predictability to business,” the submission reads.

The chamber also says Victoria’s payroll tax-free threshold – an annual wage bill of $650,000 for businesses in Melbourne – needs to be brought into line with NSW, which has lifted its cut-off figure to $1.2 million or Queensland where it is $1.3 million.

A spokesman for Mr Pallas, who has previously said the state had extended generous concessions on payroll tax and other business levies through the COVID crisis and that he believed the present settings were the right ones, told The Age that the government would reveal its plans when it brought down its budget next month.

“We will consider VCCI’s submission like all other stakeholders and have more to say on May 20,” the spokesman said.

Elsewhere in the chamber’s $2.5 billion “back to basics” business budget pitch is a plan to get Victoria’s largest export business, its $13 billion international education trade, back from its COVID crisis.

The chamber has added its voice to the tertiary education sector and the City of Melbourne in calling for a “COVID safe arrival plan” specifically for foreign students and researchers.