Liberal leader Michael O’Brien has clung to power after a motion for a leadership vote was defeated by 22 votes 9 to in a party room meeting at Parliament House.

Almost one third of the 31 Liberal MPs supported the spill, effectively lodging a vote of no-confidence in their leader, which could make him vulnerable to a second challenge in the coming months. 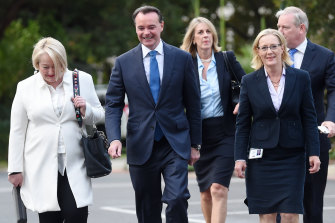 Mr Battin's chances of defeating Mr O'Brien were dealt a heavy blow last night when a key group of MPs aligned to Matthew Guy decided to vote against the spill.

Earlier, Michael O'Brien arrived at Parliament about 8.20am flanked by his senior leadership team. He said he was confident he would be endorsed as leader.

"Do we want strong and open Victoria?… That's what my team will offer," Mr O’Brien said.

"I'm very confident I'll have the support of my team and the partyroom."

Former leader Matthew Guy, who entered minutes after Mr O'Brien, confirmed he would not be supporting the challenge which was a key reason it failed.

Frontbencher David Hodgett, Matt Bach and Bernie Finn all said they would back their leader while Upper House MP Beverley MacArthur said she would back the spill motion.

Mr Battin and his supporters snuck in early to Parliament before the vote, once it became clear he would struggle to topple Mr O’Brien.